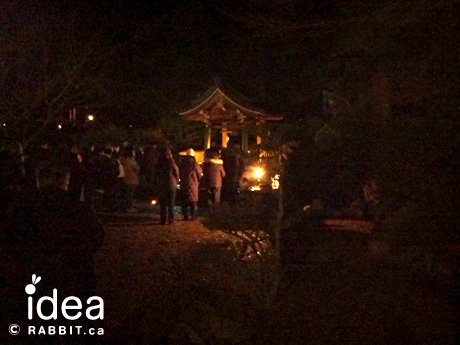 Happy New Year everyone!! Sorry for not posting for several days…been a busy holiday season! But it’s been really fantastic! I hope everyone else had a good one too.

On the eve of 2012 and new year of 2013, I went to the Joya-no Kane at UBC. After living in Vancouver for 7 years, it was time to check out the Japanese bell located between the Asian Centre and Nitobe Memorial Gardens.

Joya-no-kane is a traditional Japanese Buddhist event in which the bell of a temple is rung 108 times on New Year’s Eve to cleanse oneself of the 108 (=many) bad things from the past year and to welcome the new year.There were around 100 people that came, so it probably did ring around 108 times

The Vancouver Buddhist Temple hosts the event every year at UBC, allowing each individual to ring the bell, pray, then go to the booth where you can pick up a copy of the Teaching of Buddha and a cup of amazake (warm sweet sake).

It’s definitely quite the opposite way of celebrating the New Year compare to western ways  – no shouting and partying. No fireworks. Other than the tranquil bell that rings into the night, there isn’t  any other sounds, even more so since you’re isolated at the edge of UBC.