Do not let the name fool you. It’s NOT Thai food. It’s Chinese. Other than the so called Thai Pad noodles and Tom Yum Soup (which they never seems to have made), everything is Chinese.

The curry rice noodle is not spicy at all. For me, it’s fine, but many people feels it tastes bland. Fried rice is also bland, but I prefer that, even though more saltier and MSG loaded rice tastes better. The noodles with wonton – which I get often more than anything else is really bland. I usually have my Japanese tsu-yu (concentrated soy sauce that’s already flavoured for dishes like udon/soba) in my office fridge that I add.

Everything else is often really greasy, oily and deep fried. The quality of the meat they use isn’t that great, so I don’t usually order those, though I have tried most of them. The chicken in the spicy chicken has a lot fat in it, making me spit out hard fat out. Yuck…I hate those.

The prices are relatively good compared to other of the food booths in the food court. However, I did notice a increase in price after the HST return to GST/PST. 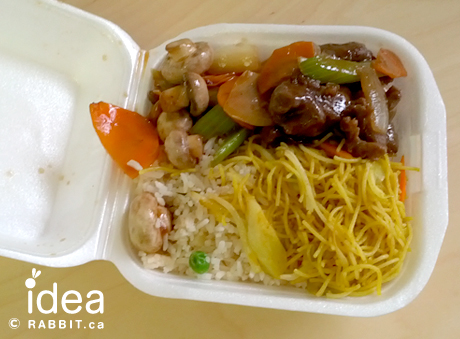 Comes in a small to-go packet

This is a small for $5.67 (tax included) which has spicy curry noodles, fried rice and beef mushroom. It’s not really filling, so a large might be suitable for most people for around $8 (pictured below). 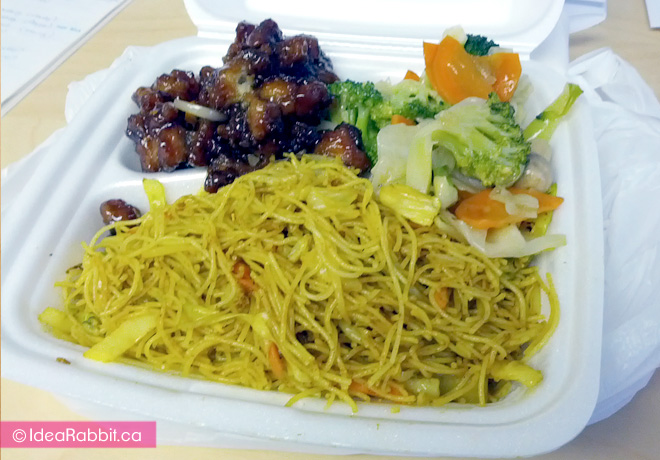