I love the interior and decor of this restaurant. I became a fan of Sushi Bella from going to the one in Kits (read post here), but this location is one step up. More modern, higher-end and slick – perhaps simply because it’s new. It’s nice to see such a beautiful restaurant on Davie st! They use my favourite colour teal throughout the restaurant – just lovely!

I also love the branding (again), good service by all the staff, and they came to fill up the tea cups every so often. I got to sit by the window looking out onto Davie. It was early summer and it was nice under the still weak sunlight. We were seated by the door, and unfortunately, right outside were some bums smoking pot. Totally ruined the atmosphere. We closed the door for some time until it got a bit stuffy inside, but by then, they had stopped smoking. 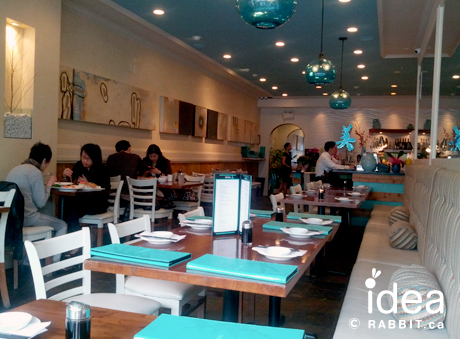 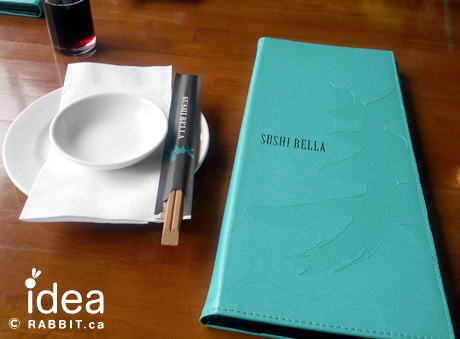 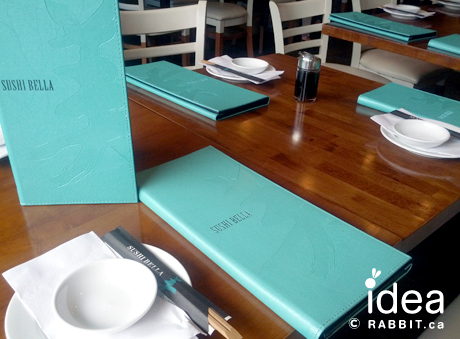 Presentation at Sushi Bella is always considered well. It’s an art form in itself, starting from the unique names to their special rolls like “Dancing Queen” $12. For the price, it’s considerably smaller than your usual ‘cheap’ places, so don’t expect to be full with one roll. The taste is always fresh and delicious. My Sushi Bella Tower $12 had a bit too much mayo though.

We had gone on Mother’s Day, and we did see that mothers that day would get complimentary ice cream. I’m not sure if everyone else got one, but since we brought a big group of 12 people, we were given some ice cream to share. Yum!!

I’d definitely would bring my family or friends here for sushi, especially if they prefer quality over quantity. 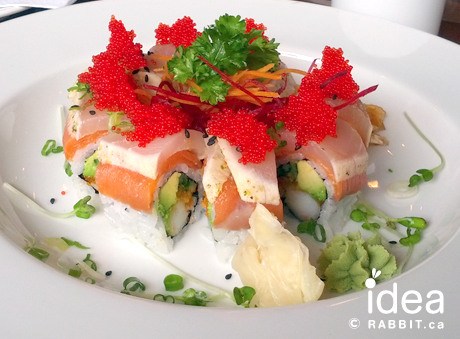 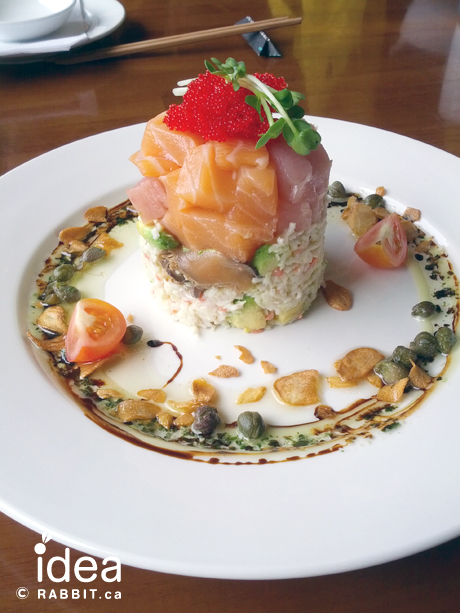 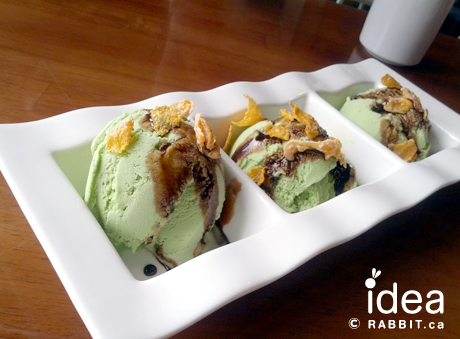 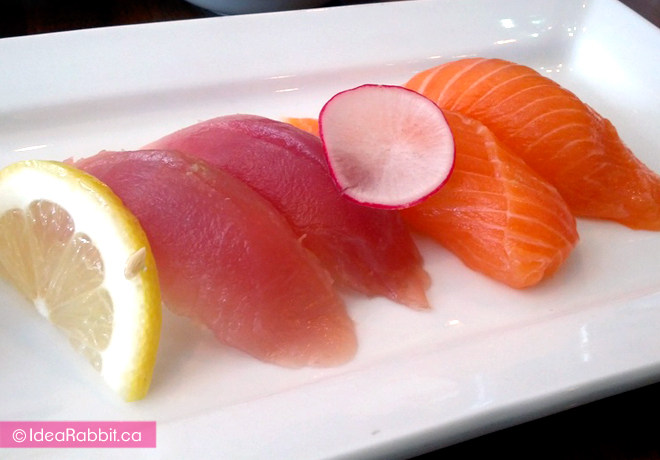 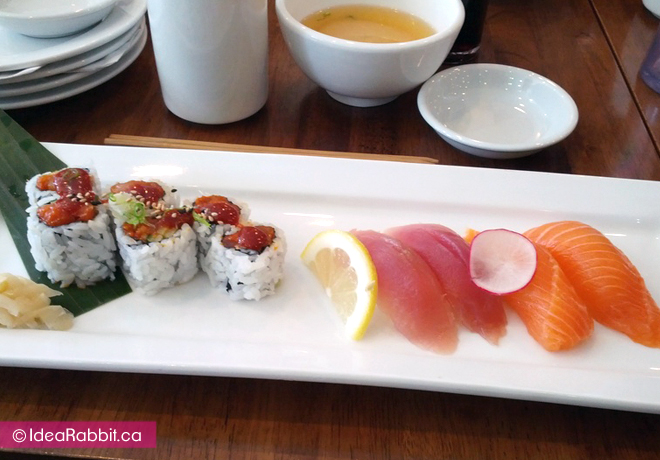 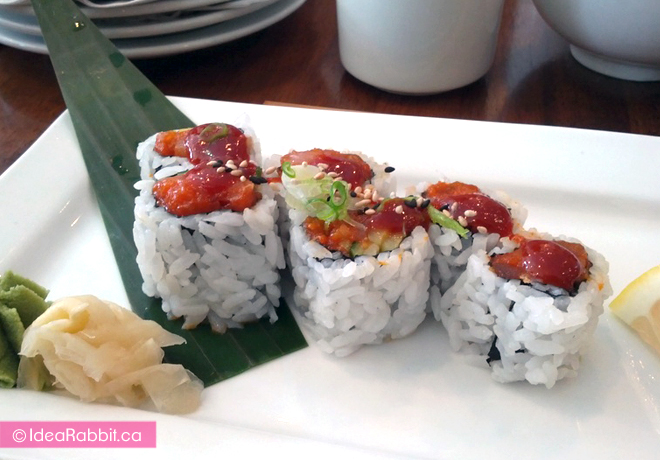 Spicy Tuna Roll. It’s just my preference, but I like it when the spicy sauce is mixed in with the tuna, and not like this where it’s just poured on top of it.

I ordered the Volcano Roll $7, and to my disappointment, it was just a huge pile of spicy tuna on top of some California rolls. Yes, I know that the menu states “Chopped spicy tuna with green onion on top of California roll”, but seeing the consideration taken into their presentation and taste of other dishes, I was expecting a bit more. 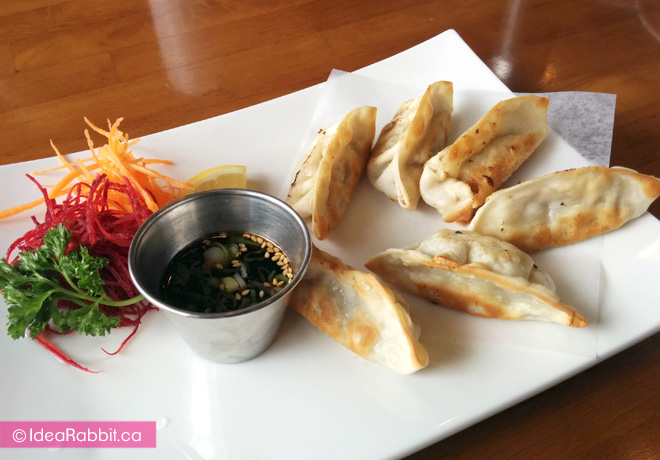 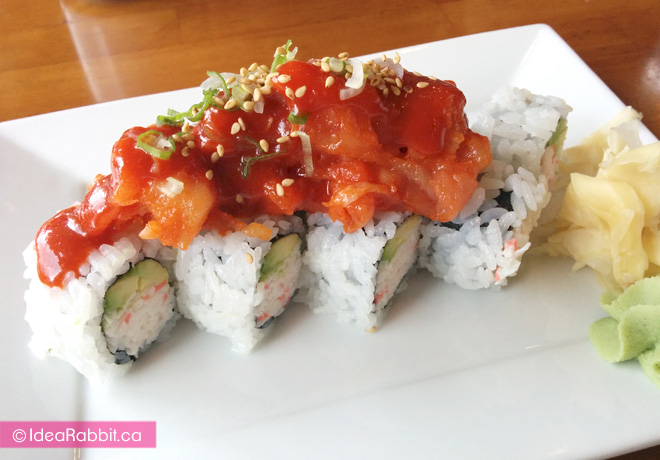 There was way too much spice sauce and it kind of drowned the flavour of any of the other ingredients. The chunks of tuna were too big, and it would have been nice to have it minced instead. I would not order this dish again, but would definitely return to the restaurant. Great gyozas as usual, and excellent service.