This cafe was jam packed, mostly with young Asians on a weekend around 5pm. Both inside and their fairly large patio was all full. This cafe is targeted toward young women who have a bit of more income and are willing to spend $4 for hot water and a tea bag. I ordered the Vanilla Honeybush $4.25 and Montreal Beef Sandwhich (half) $4.95. Talk about small portions at a price! It is probably a third of the footlong sandwich for $5 which I usually get from Subway. And at least Subway makes it fresh and custom to the way you like it. This half sandwich was already pre-made.

HOWEVER, it was delicious. The sour veggies and the roasted beef went really well together. The 3 small pickles on the side was a nice touch and way to cleanse the mouth. The honeybush tea had a nice aroma, and although no cream inside, it did have a slight creamy flavour. 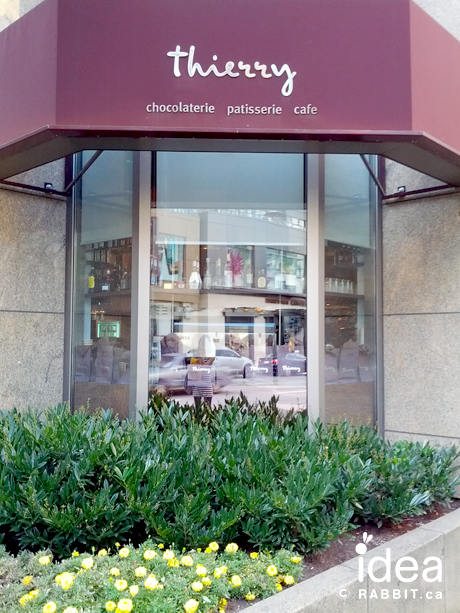 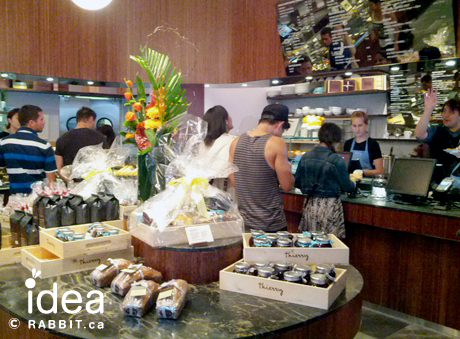 Despite the price, it’s super busy! 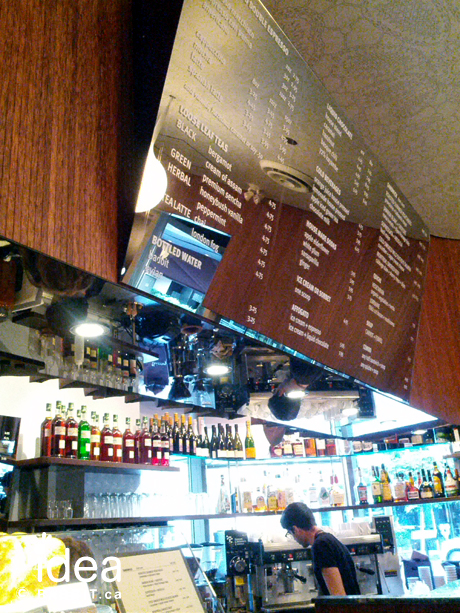 Modern, but a bit difficult to read menu board 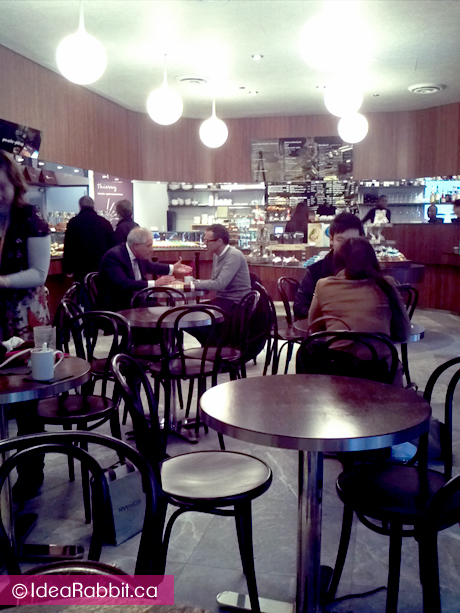 Umm…yeah, this photo was actually taken the very first time I went to Thierry…and it was a few years back…I haven’t seen it this empty since then… 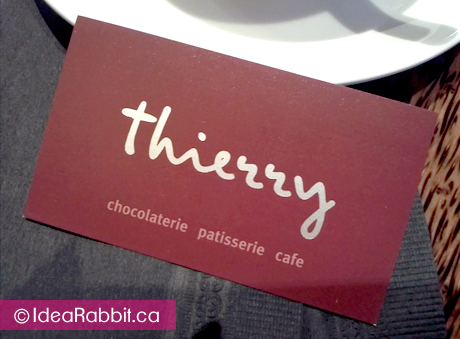 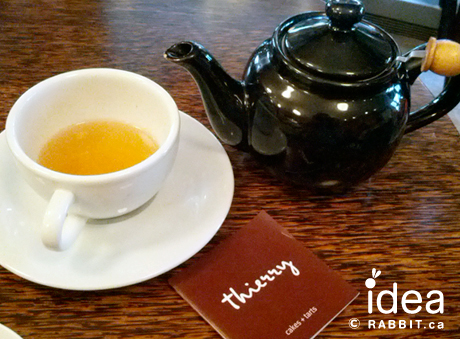 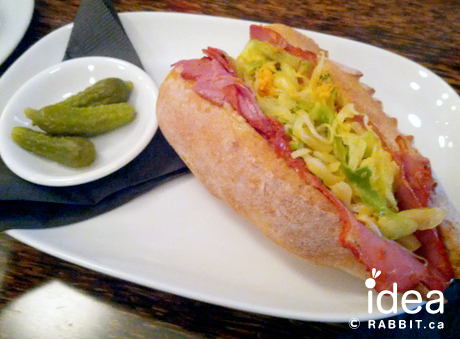 I am not a fan of going to places where I have trouble hearing the people across the table, especially if they’re soft spoken. It’s a busy small area, crammed with small tables and lots of chairs. You’ll have people carrying their cakes and teas behind you trying to make their way through the winding space between each table. It’s a bit loud, but if you like that lively full-house cafe, this is a good place to go.

We stayed there for about 2 hours, but I think I froze from the AC and the wooden chairs are not that comfortable to sit in for long periods.

I do LOVE their branding. The business cards, the consideration into the colour of the black napkins, their tags, packaging is very well done. The mirrored menu board is a bit difficult to read, but is very modern and slick. This is a slightly higher end cafe than your average Starbucks-like cafes.

Next time,  we came with a large group of 8 people. This isn’t a good cafe to bring a large group like this. It is hard to find seating, and takes a bit of juggling for everyone to sit together. As usual, it was jam packed. There were some that were sitting out in the cold…amazing. We were all freezing in the cafe, so most of us kept our coats on.

Sheepie and a friend both ordered lattes, and they complained so much on how is was so bitter and terrible. The friend went back to get her drink fixed, but still ended up leaving early as she wasn’t happy with the cafe. 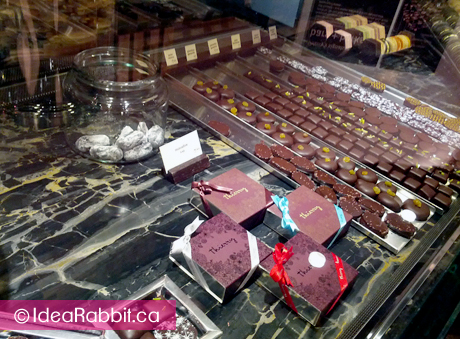 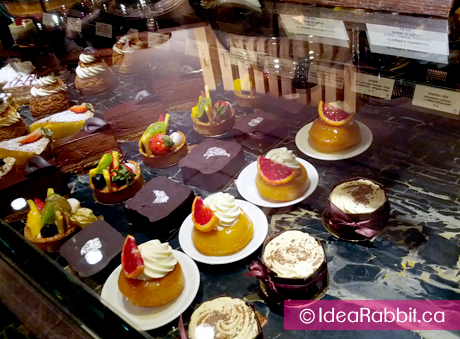 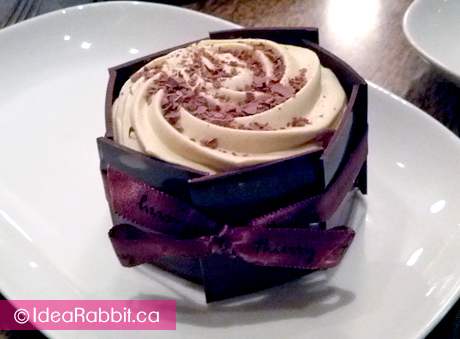 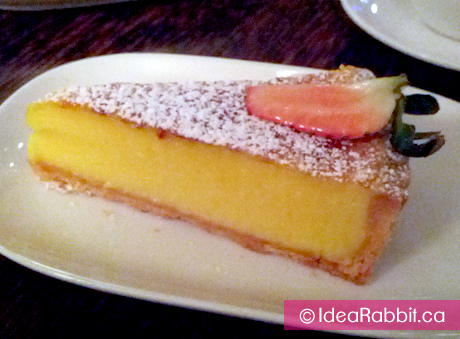 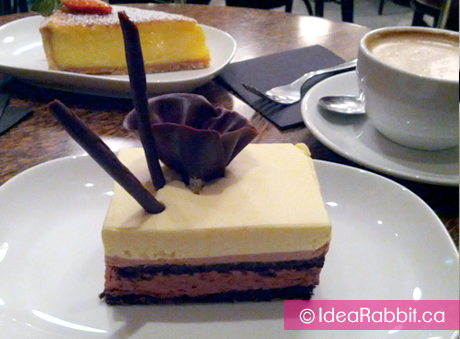 The chocolate wasn’t as spectacular as we were expecting, but the pastries – the cakes $6-8 were really good! Yah!

After writing this second review, I’ve actually taken off a ‘carrot’ from four to three for atmosphere, simply because it’s just way too crammed and the seats are really uncomfortable to sit on. Because it’s so crowded, there are several tables right by the bathroom making it annoying with people coming and going closeby. It’s too loud for me, and during the colder months, it’s freezing in there.

I’ve kept the Taste rating to still 4 despite the latte issue because other than that, it was really good. I guess I would rate the food to 4, and the drinks at 2. One time, my brother ordered the hot chocolate and he barely could drink it because it was like a chocolate bar melted and poured into a cup. I’ve always had tea so I haven’t had any disaster drinks, and I would be very surprised if they can screw up a tea bag and hot water.