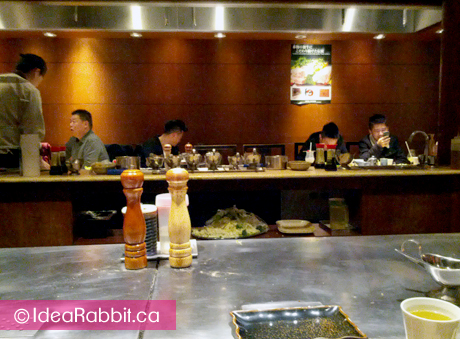 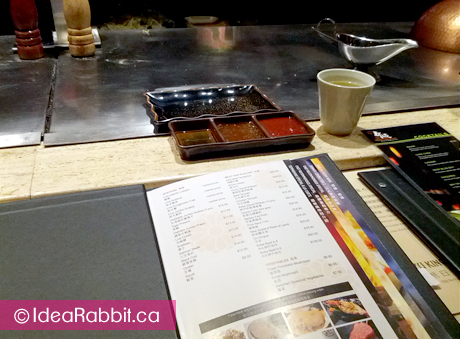 The 3 sauces. The other plate on the grill is where the chef will place the grilled food for you. 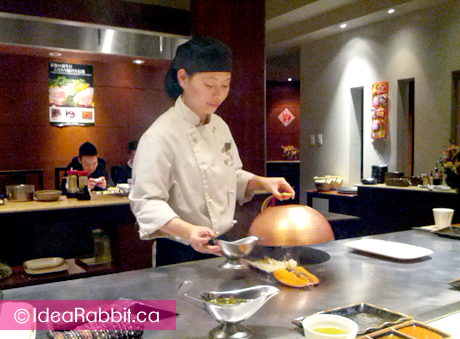 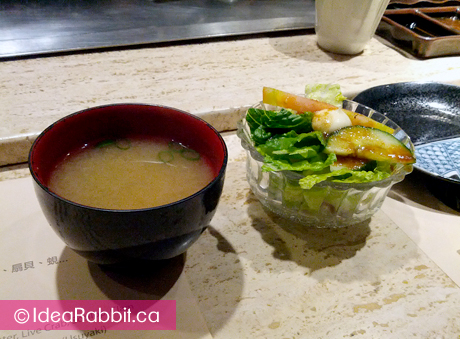 I ordered the Scallops $13.95.  Yes, I think there were 8 pieces which we split amongst both of us. Sheepie ordered the Economy Value $28.50 which included a tiny bowl of salad, miso soup, salmon steak, prawn, squid, chicken, pork, assorted veggies and one small bowl of rice, all of which we shared.

If you’re in a hurry. Do not go to this place. There is one chef for our side of the grill which had Sheepie and I, with another group of 4 people. She made one or two item at a time with breaks in between where she would leave, so it took a really long time for us to dine. Also, if you’re not into sitting beside strangers while eating, this may not be the place either. Everyone sits around the grill together, so unless you’re sitting in between people you know, expect to be seated with strangers – which isn’t a bad thing. But perhaps not a place to discuss confidential or private topics.

I’ve read about some people complaining the chefs not talking but I didn’t mind about that part. I guess it would have been more entertaining and lively, but I guess I’m used to ‘quiet’ service coming from Japan. So that wasn’t a bother.

Indeed the portions were quite small, but the taste was good. You see them using a lot of butter with everything so definitely is not healthy…I actually would have preferred them without butter and the sauce to dip would have been quite enough. Sheepie was shocked to hear that our dinner service has ended, even though I had told him at the beginning of how I had read reviews of the small portions.

I didn’t find the service rude or anything. They took my coat to a closet, and since I didn’t want it smelling like oil and grill, I gladly handed over the coat to the server. They kept coming back often to refill our tea cup. I find the service quite satisfactory.

The taste/flavour was pretty good. There were 3 choices for sauces for the grilled food. I mainly stuck with the teriyaki bulgogi-like sauce. Again, too much use of butter in all their grilling for me. The rice was only half cooked. Blah.

Would I ever come back again? Probably not, mainly for the price. So unless I can get a really good deal on Groupon or something. I don’t see myself returning paying over $50 for something that was more in the $30 range.