A fairly new sushi place that has been quite busy ever since it opened. I wasn’t too interested, but after my friend kept raving about their giant roll, I thought I’d give them a try.

The menu (book) is one of the largest and heaviest menus I have ever seen. All with photos and nicely put together, it’s more like some work portfolio than a menu – especially for a cheap, quick sushi-ya like this.

Their signature rolls are the giant rolls. A regular dynamite roll which the name is misleading since it is still double the size of a regular roll you would get elsewhere (so essentially, it’s a futomaki – fat roll) 5 pieces for $3.50. If you get it as a ‘giant’ version add $2 to it, and you 10 pieces. Really, I can only eat 5 pieces, so great if you’re sharing with someone else for the price of $6! You don’t need to use any soy sauce as many of the rolls already come with sauces. 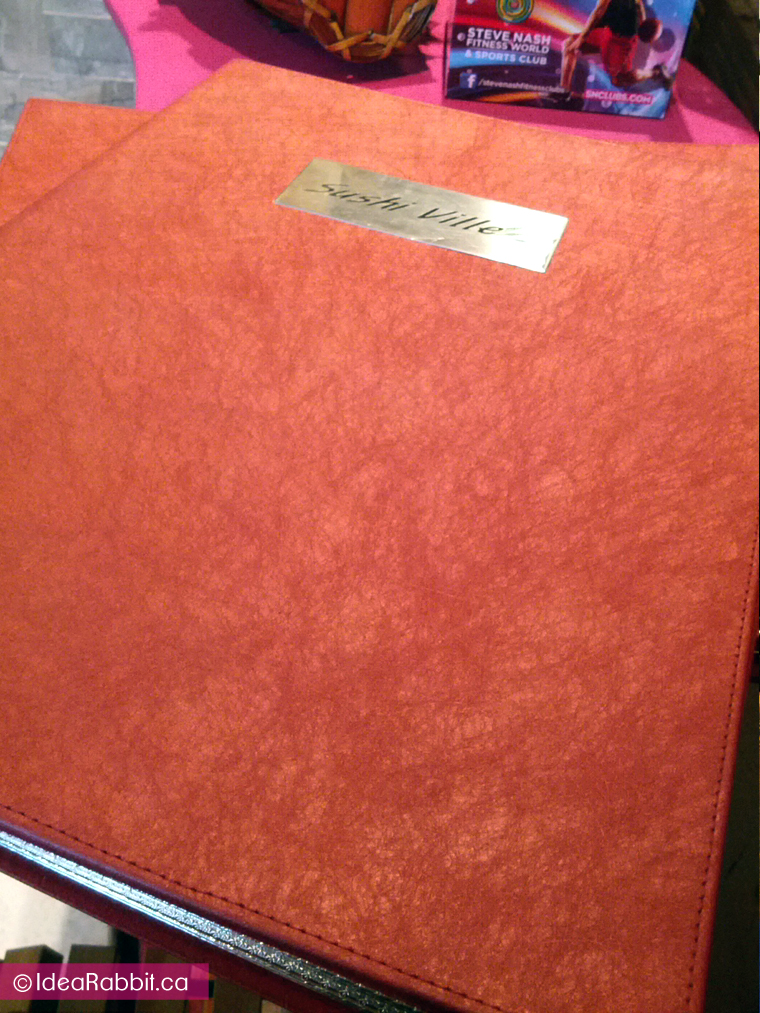 Biggest and heaviest menu I know… 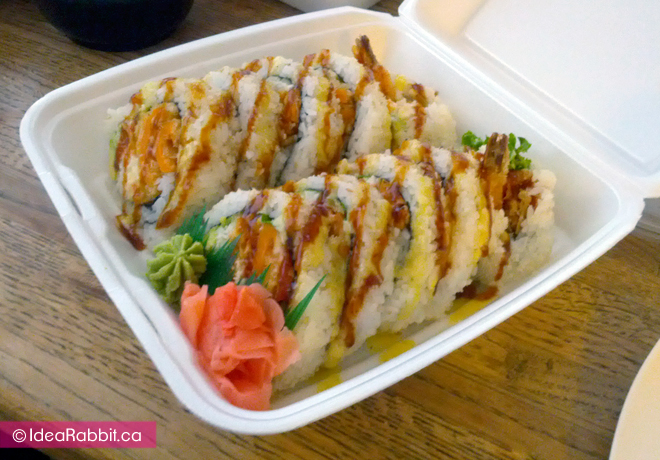 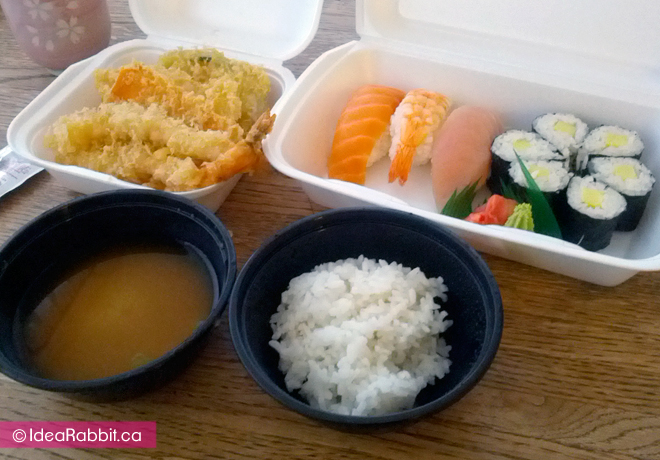 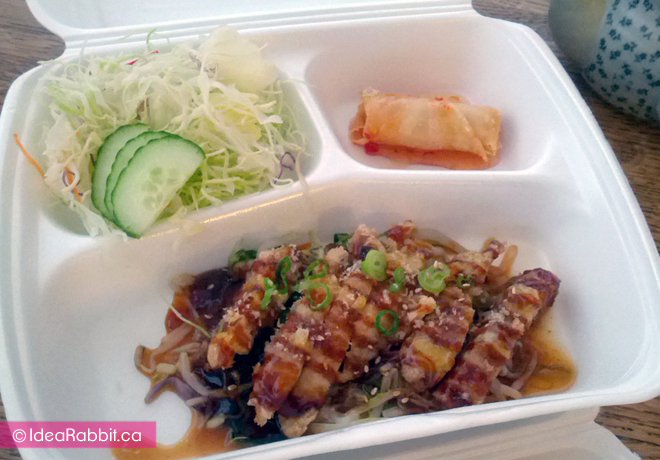 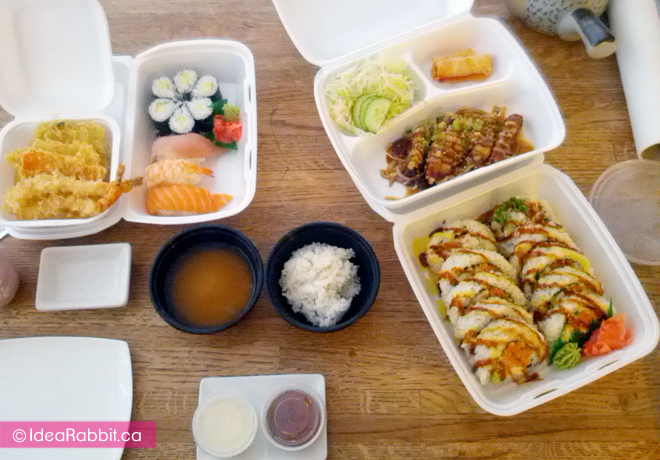 One time for take out, I ordered the Sushi Bento $9.95 (includes rice, miso soup, salad (mainly raw cabbage), salmon, tuna and ship nigiri, tamago roll (6 pieces), chicken teriyaki, 5 pieces of tempura and one special item – in our case it was a spring roll. It was all really good. The dressing for the salad is quite tasty. Food isn’t crammed into one box, and I liked how they presented the tamago roll into a pretty flower arrangement. Nice touch! (though not environmentally friendly T_T)

This Korean-run restaurant is fairly clean, though not the most pleasant if you sitting at the very last table near the kitchen and bathroom. Dining in is ok, but I prefer taking out. I usually take out for a potluck or gather with friends. They always greet and thank in both Korean and English (yeah…those not familiar with sushi must get confused…) lol. If you’re looking for fast, cheap and good portions, this is the place for you!

So I’ve dined here twice. It’s almost always pretty busy and can get quite humid sometimes. The first time Sheepie and I dined, we got the last table at the back. Not the most pleasant. The decor and interior is ok, but near the back kitchen is a bit sketchy. It’s also pretty close to the bathroom. The giant rolls are big and the best deals. Unless you’re like Sheepie who hates the Giant rolls because they’re hard to eat. I always take them apart, cuz there’s no way of eating the whole piece in one bite. 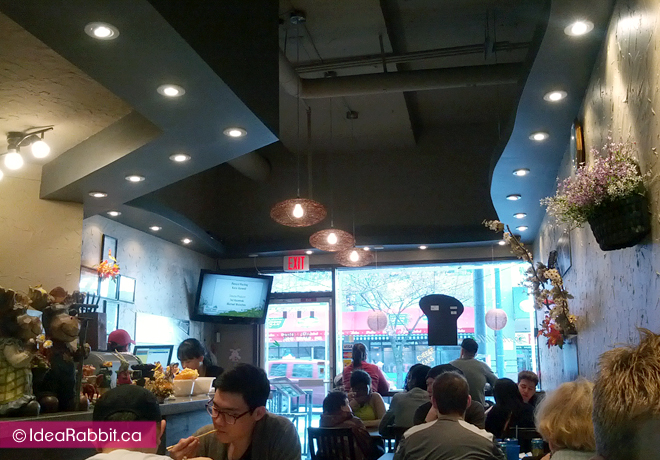 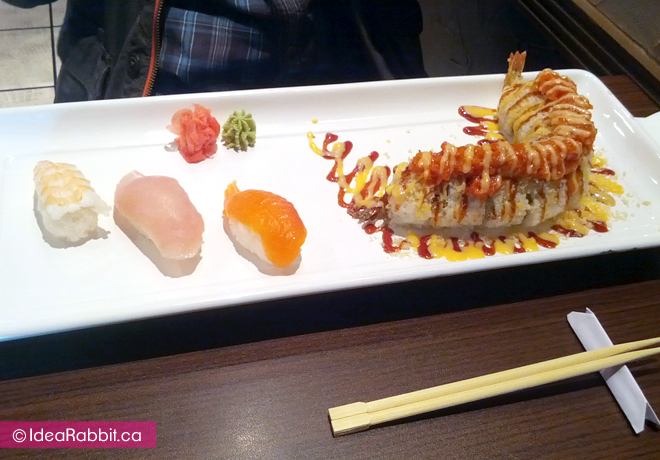 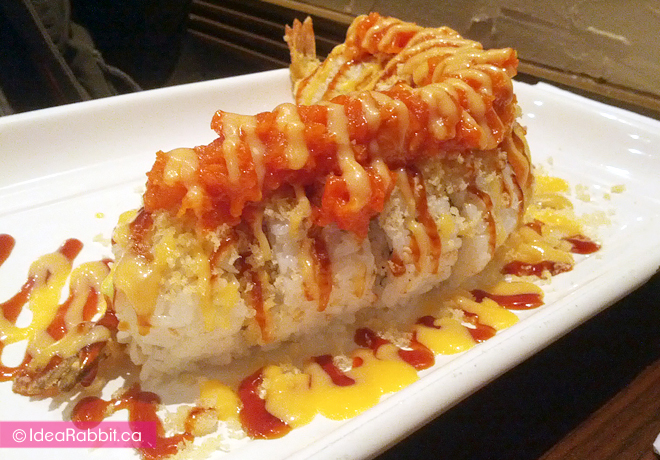 I find that the special rolls have too much sauce on them. I might ask for less next time. The contents doesn’t really matter, because it gets drowned in the same sauce T_T. 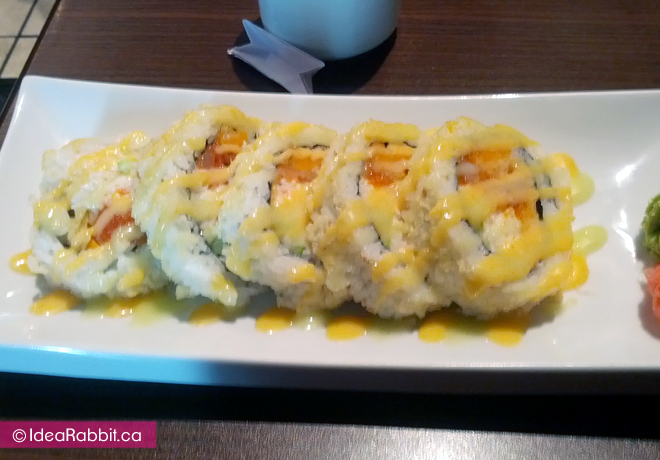 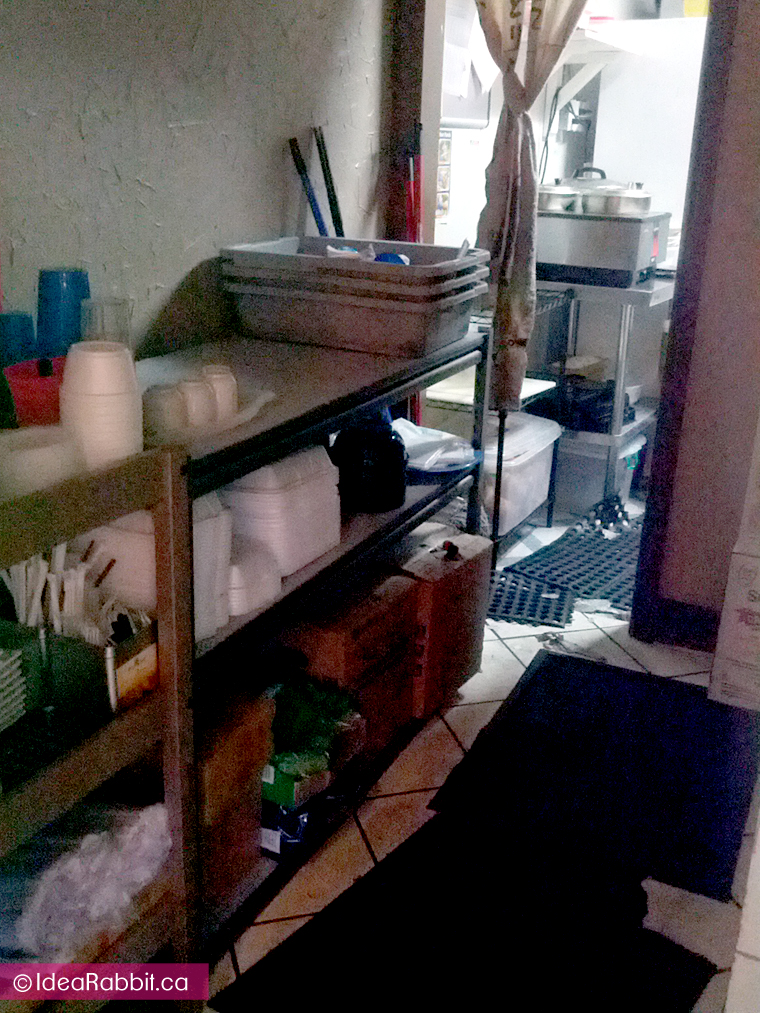 Not so appetizing right behind our table

The second time, it was next to the bar. But we had a movie to catch at 7:30pm. My friend wanted to be at the theatre by 6:45pm to get good seats. I arrived at 5:55pm to Sushi Ville. I think my friend arrived 10 minutes later and we ordered. For some reason, the sushi took forever. By 6:20, we told them we wanted it to go instead and paid. At this time, the restaurant was surprisingly only half empty and had only another to-go order. We saw the table that came after us already being served. My roll was ready, so we started eating that out of the to-go box. My friend’s roll was still not done. Tables that sat way after us were already eating. It was around 6:40 that we finally got it and my friend ate it while we walked over to the theatre. Not sure why a roll would take 40 minutes.

They are always busy and even take out will take at least 15 minutes, so best to call early and dine in the comforts of home if you live nearby.

Back on Canada Day

After a tiring day checking out events around the city of Canada Day, a friend, Sheepie and I decided to eat at Sushi Ville. Not surprisingly, it was super busy, but just as we can, they had one table out on the patio. We squeezed another chair so that 3 of us could eat from a tiny table.

We knew it was busy, but the staff took forever to get our order. They had 3 staff on the floor serving 9 on patio and about 16 inside, along with take out orders. The water they gave me those plastic coloured cups had some oil floating on top – eww gross.

After they finally took our order, Sheepie and the friend went next door to BodyEnergy Club to look at some body building supplements. The girl next to our table were already seated with their orders taken when we sat at our table still didn’t have her bento box. The guy accompanying her was eating away at his sushi.

The boys return and still no food. The girl finally gets her bento when the guy finishes his food. 40 minutes go by…finally when the couple that came much after us got their food, my friend got up to talk with our server. The friend came back to ask what we had ordered. WHAT?! We waited for so long and our food wasn’t even made!! They forgot! (or lost the order). What’s pathetic is that the server didn’t come up to our table to re-take our order at first and made my friend go fetch it. After seeing that Sheepie and I were confused and disappointed more than upset cuz we were tired, the server came over. He apologized and told us that he would give us discounts. 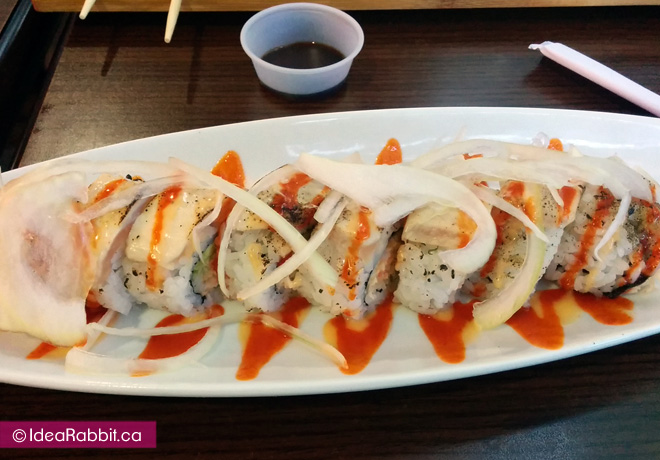 So we ordered again and waited. Luckily, it didn’t take too long. My friend said his rice in the rolls were hard and not completely cooked. My Spicy Tuna Tataki roll $5.75 was delicious. Just love the tataki, the thinly sliced raw onions and the spicy sauce goes so well together! My new favourite fancy roll!

I can’t recall what discount we got, if we even got any. Trying to do the math much later after only taking a glimpse at the receipt at the busy cashier area. Maybe 5-10% off?

It seems like our visit to Sushi Ville just keeps getting worse. If it weren’t for my new favourite roll (yes, the Spicy Tuna Takaki Roll), I wouldn’t go back. Well, I think I definitely don’t want to dine in anymore. Future dining will be take-outs only!

Or so I thought. The next two times, I called in for take out. But just picking up and paying took forever. I thought the girl in front of me was waiting for her order since the staff ignored her even though she was right in front of them at the cash register, but no one had even taken her order! Terrible! The music is so loud which seems to be coming by the cash register. That is also where the phone is, and I can hear it blasting as I try to order over the phone. It’s hard enough to understand the staff with strong accents. The only reason I go (though I am close to being fed up) is for their Tuna Tataki rolls. Otherwise, I would not return and sadly, they have lost their carrots from ‘Service’ from 3 down to 1.

Yes, I said I wouldn’t be back, but since it’s so conveniently close, I end up here. It was Christmas Eve and I was hungry. I just wanted to take out a Negitoro roll. It was 2:40pm. Other people were waiting for their to-go orders…then they got theirs. There weren’t many other customers since they were turning away those that came in as they had their last call since they were closing at 3pm. After 30 minutes of waiting, I finally got my Negitoro. Service has gotten worse with the attitude, unprofessional attire and long wait.

You can call me stupid. But it’s so close to home, it’s the first sushi place to go to for take out. I keep having issues with them, but I keep returning…

This time, the staff I spoke to on the phone was probably new to the restaurant, will little English skills. I wanted a bento, but then I was told they were only available until 4pm (this, I couldn’t understand until she repeated 3 times as her accent was so strong). I was surprised as I had ordered the bento before for dinner. I was suddenly thinking of something else to order. I asked if they had something like an Assorted Sushi and Sashimi combo, and she said ok. About 10 min later, I got a phone call from them from another staff saying they don’t have an Assorted. So I ordered a Spicy Tuna & Sushi Combo $17.75 which included a Spicy Tuna Roll (8 pieces), Kappa Roll (6 pieces), Spicy Tunal Sashimi (3pieces), Salmon Nigiri (2), Tuna Nigiri (1) and Spicy Tuna Nigiri (1). It sounds like a lot. But it wasn’t

I ordered a Kappa and Negitoro roll on top of that as well.

They took 30 mins to get my food ready. Plus, they forgot the Kappa roll from the combo!!! ARGH! And it was so expensive to start off with.

The other day when I quickly passed by, I noticed it had changed it’s name and I think the interior as well.