Another 24 hour open cafe. I’m happy that there’s now Breka as an option rather than the Tim Horton’s on the other block which is usually filled with beggars and bums. Not to mention one person getting shot, and another occasion someone throwing out a chair out the window and breaking I think 3 panels of glass…

Breka is a step up (or several steps up actually) from Timmy’s. It’s got a nice interior, tall ceilings, interesting framed photos, and lighting. They have an extensive pastry menu which can make you stand there looking at them over and over unable to decide which one to get. I ordered the Eclair $4.50 to go. 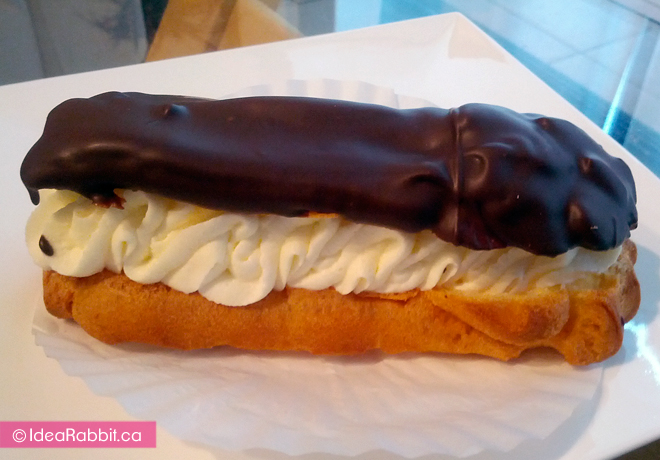 The staff were friendly. The place was clean. Although it seems popular, I haven’t seen it packed like the one near Robson, which is good for me. I’d prefer quieter and spacious cafes. I would love to sit and catchup with friends over coffee next time.

Craving for some sweets, I went to Breka on Davie for a Strawberry Shortcake $4.75. When I entered, there were 3 girls chatting away at the cashier. One customer was looking at the pastries. Not being greeted, I also started to look and once I had decided, I walked over to the girls. One girl went to get the cake. She told the cashier that I was getting a Strawberry Shortcake. She doesn’t say it with much volume, so the cashier thinks it’s Carrot Cake instead. The cashier doesn’t know where the carrot cake button is and the cake retriever again says Strawberry Shortcake. The girl helping the cashier says to punch in carrot cake, and on and on, the confusion continues. I’m ready to put my credit card into the machine when I make sure that it’s a STRAWBERRY SHORTCAKE, and they get all confused again. Talk about miscommunication. Either they are all new, or they need to speak clearer and louder. Once it was punched in correctly, it was 75 cents more than the ‘carrot cake’. 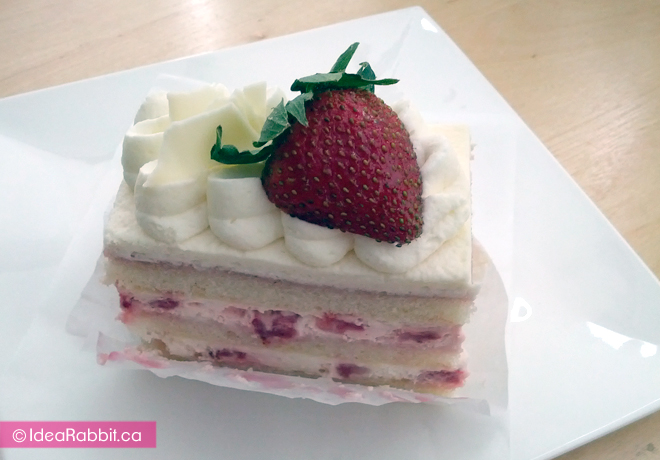 The next gentleman in line was helped by another different girl that came from the back. So there were 4-5 staff behind the counter, a bit crowded for a small cafe.The staff gave him a cookie, when he wanted a coffee. I’m not sure who is at fault there as I was too busy with my order.

In the end, they did apologize in a ‘ha ha, we don’t really know what we’re doing’ attitude, but they didn’t say thank you or anything after I paid.

Unprofessional and sloppy. Would definitely be shut down in Japan.

I met up with Sheepie around 1 am for Chamomile tea and Sheepie wanted to satisfy his sweet tooth, so he got himself a Bird’s Nest cookie $0.85. It was definitely nice to be able to chit chat at a cafe this late in downtown without getting harassed by beggars as we used to at Timmy’s a few blocks down. Surprisingly, they didn’t even come into the cafe. With a shooting and later some window smashing at Timmy’s, I avoid going there late at night anymore. 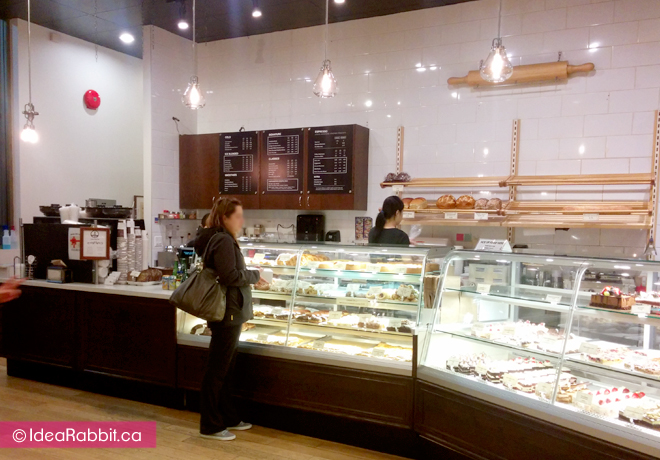 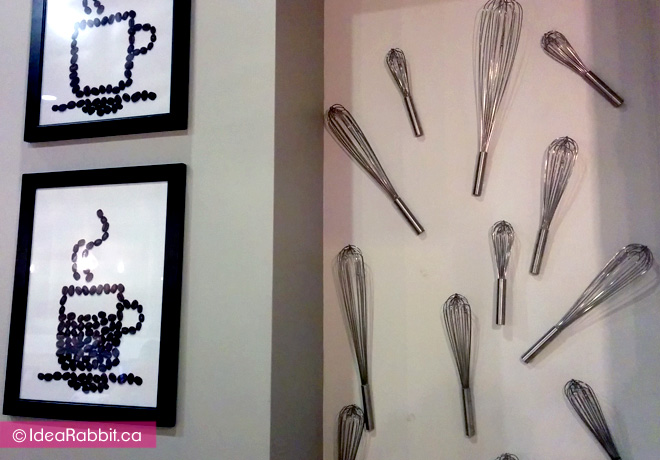 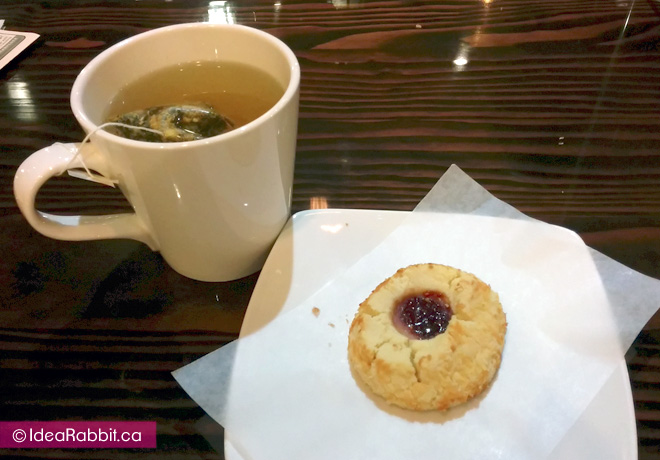 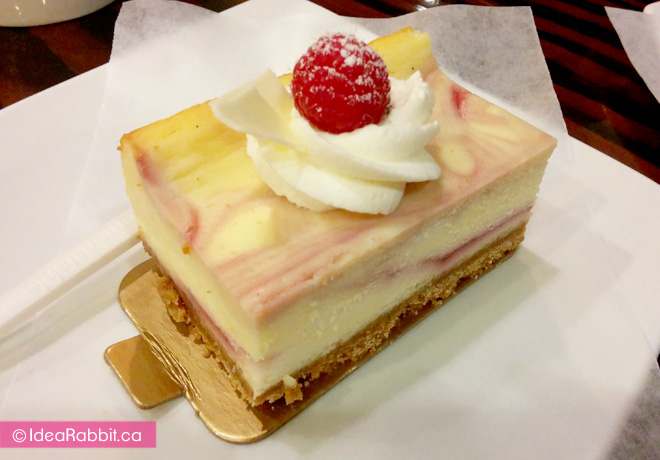 Raspberry Cheesecake: a bit too sweet for me. Very rich. 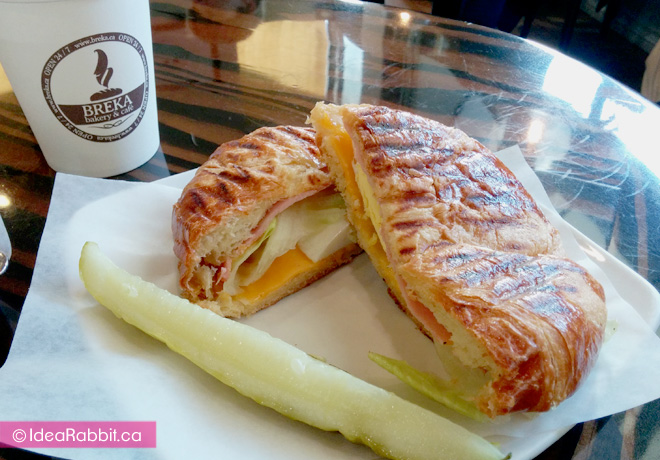 Crossaints Sandwich: super buttery and greasy… but the pickle was nice and crisp. 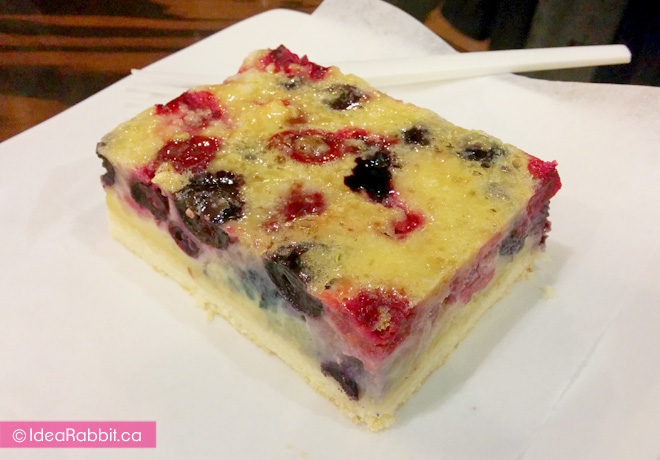 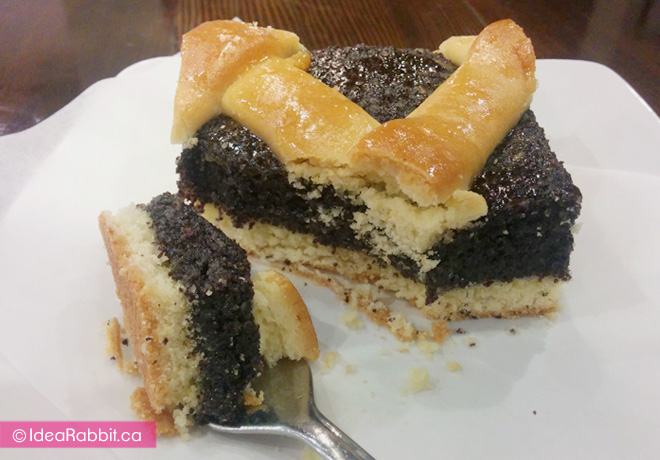 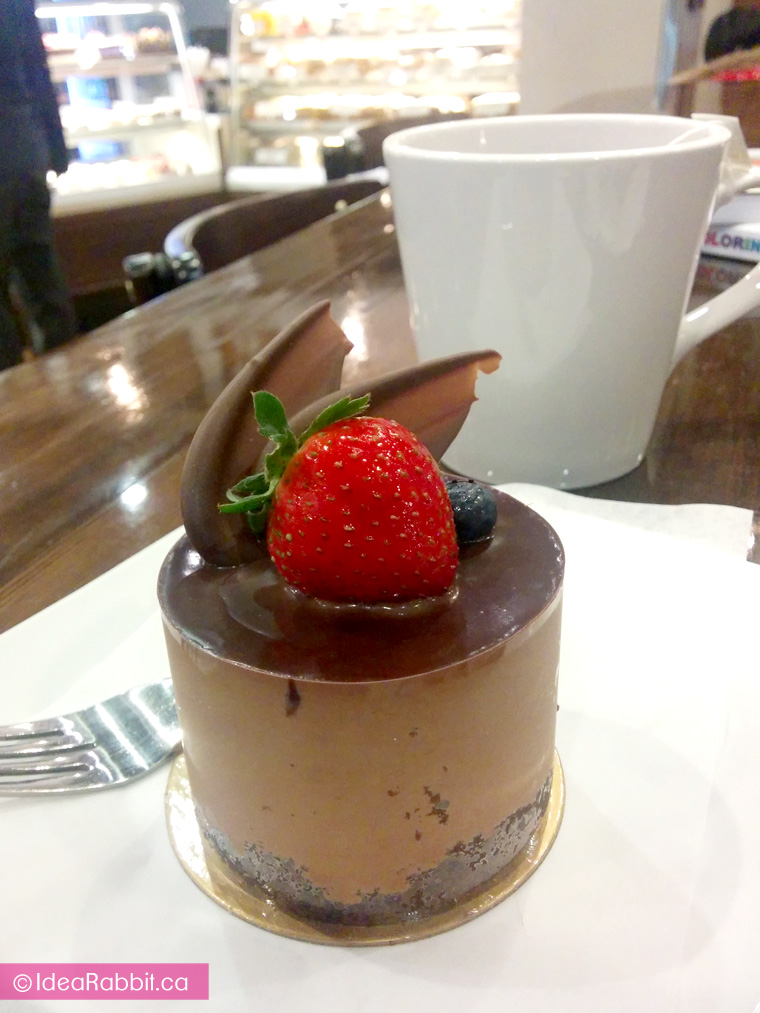 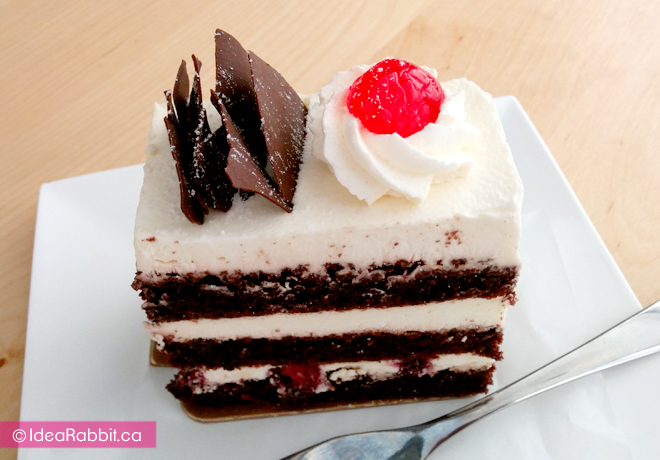 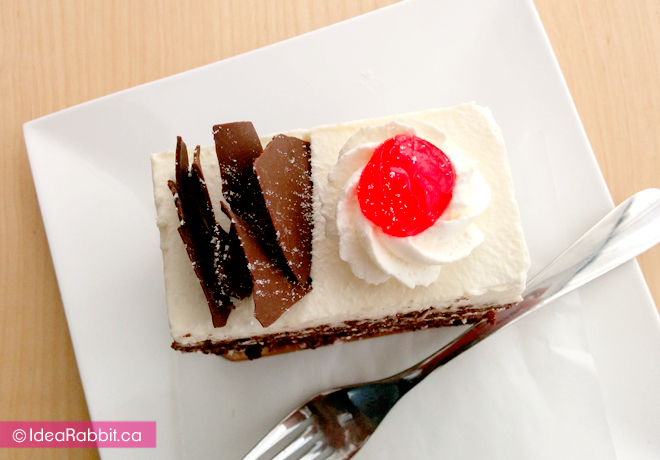 Black Forest Cake $4.25 Nice and creamy, not too sweet. 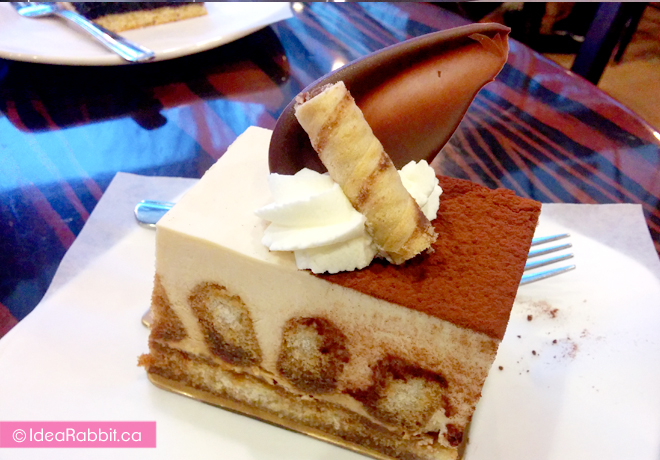 Tiramisu. Super creamy. One of the best tiramisu cakes in town. 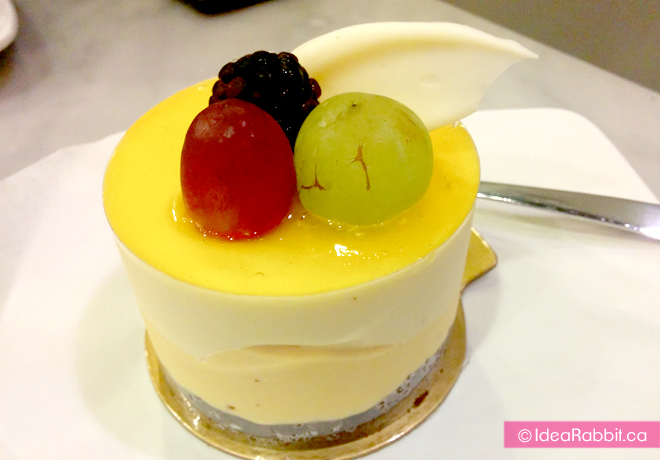 Mango moouse. The bottom was super dry and crumbly. Didn’t fit well with smooth top. Not the freshest grape on top. 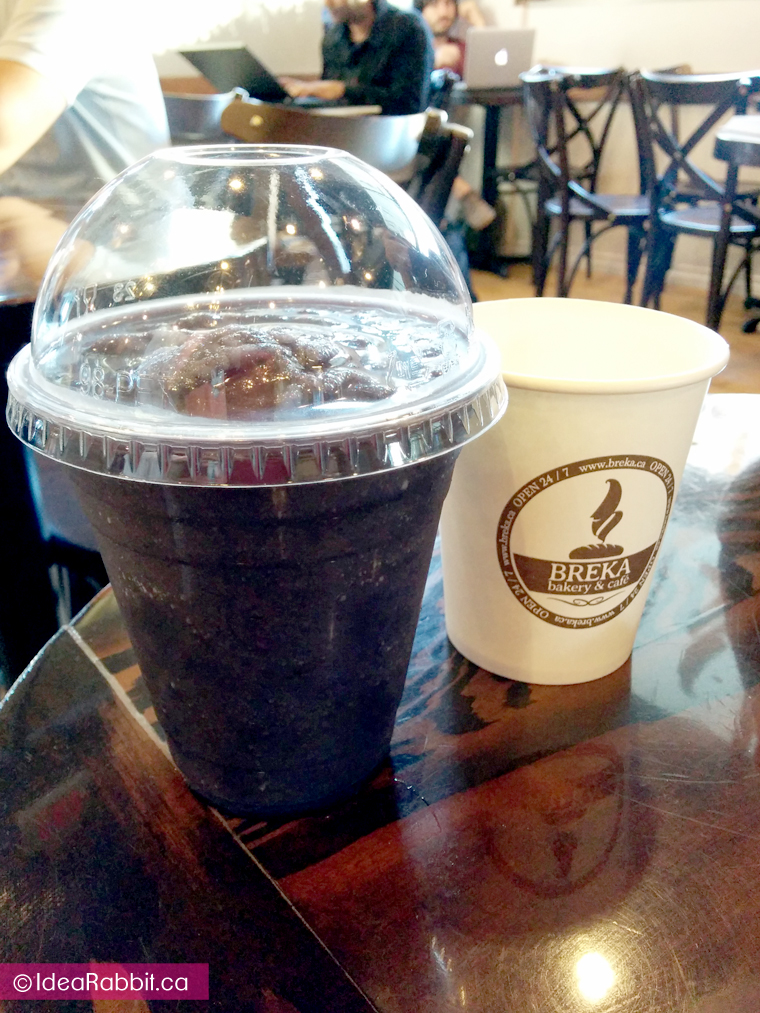 Do NOT order the smoothie from Breka. I love Breka for their pastry and coffee, but their smoothies are not good – in fact, maybe the worst I’ve ever had, to the point we actually returned it.

I thought I would go healthy and order a smoothie, hoping for some real fruits and yogurt. I ordered the Acai Pomegranate Blueberry Smoothie (small) $4. When I took the first sip, I was shocked at how sweet it was. Sheepie tried it and even he, who has a huge sweet tooth couldn’t believe it. We joked that it tastes like just concentrated syrup with ice. When we went to complain to the staff, she explained that they had a syrup that they mixed with ice! I was disappointed in not having absolutely zero real fruits, but not being able to drink it at all because it felt like we would become diabetic from that drink, we asked if we could exchange it for an iced coffee instead.

I’m glad that the staff was nice enough to do that. But I wont be ordering their smoothie again! 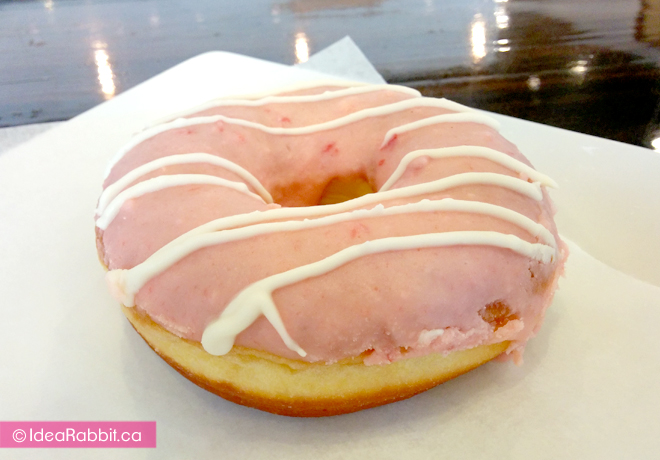 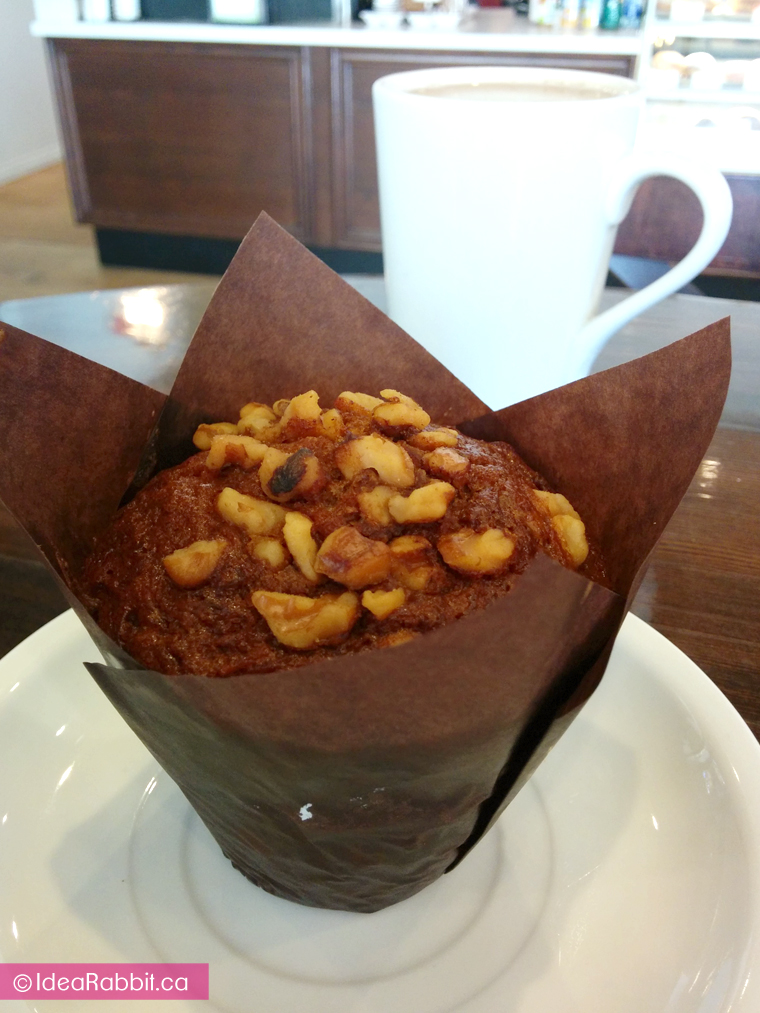