It has free parking, which is great, being on Broadway and all. If you sit by the window, you can see downtown and BC stadium – beautiful scenery when everything it lit up at night. The restaurant is big and spacious. The furniture is well built and sturdy. Decor is – well Indian and the place is always kept clean and tidy. It’s a good place for a large group. Once before, we had about 15 ppl, and they were easily able to accommodate. 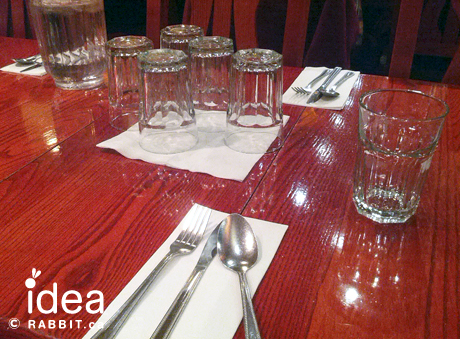 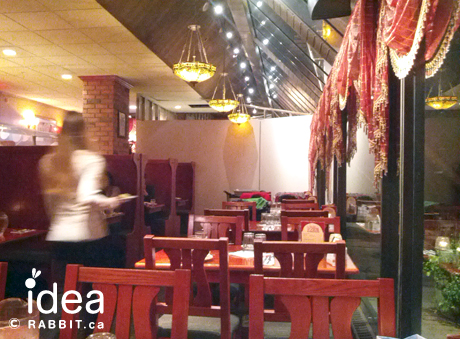 For dinner, the all you can eat buffet is $15.95 per person (Monday-Thursday) and $16.95 (Friday-Sunday) hours are 4pm-10pm. The waiter isn’t what I call friendly, but it’s alright. For the most part, you serve yourself, so not much interaction with them anyways. 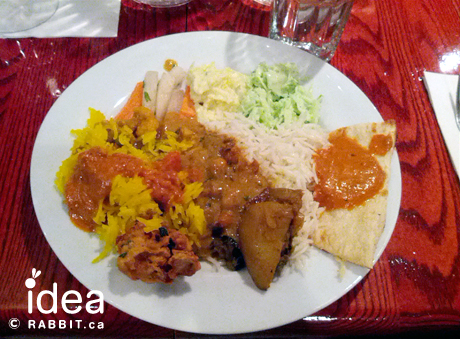 I like the selection you have here, has definitely more than the India Bistro (buffet) on Davie st. The taste may be a little bland at times, but for the most part, I’m pretty happy with what you get and how much you can get for that price. I’ll be returning again as usual.

I had a voucher from Social Shopper, so Sheepie and I decided to dine there on Friday evening. They have a good selection, but their taste is not as rich and flavorful as non-buffet restaurant. We had the nice private booth. 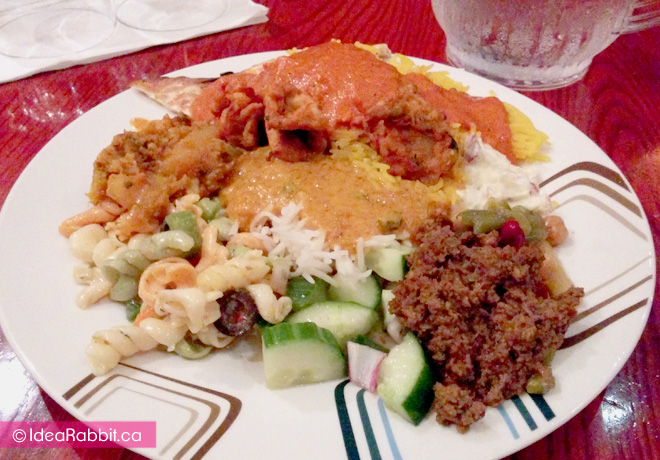 There was already a 15% tip added (on the regular price) – for a buffet? Ok, so the server sat us down and took our plates away when we were done, but that’s it. Since they put a pitcher of water on the table, we help ourselves. The food obviously is self-serve. No staff ever came by to ask if everything was ok, or anything.

I don’t think I’ll be returning anytime soon. The quality of the food isn’t as good as other restaurants. The next morning, I had stomach issues. I know I’m sensitive to spicy food, but I’ve had plenty of Indian before and elsewhere with no problems.

I have been here many times now, not because I want to, but because the organizer of the social group I am a member of  chooses this restaurant to meet up, I don’t have a choice sometimes.

The restaurant is fairly large and spacious. We usually seat about 20+ people in the group in 3 large tables put together. The server usually comes by to take our orders fairly quickly. Since I know that every time we’ve gome as a group, I knew better to order sushi instead of any cooked dish. They always take longer for those, or we’ve always had a problem with one person’s order being not made. Again, this time, the person sitting diagonally from me, his dish never came. When we had ordered, the waitress had told him that it would take longer , but after 40 minutes, he asked where it was. The manager came by to talk to him, but he was quite upset. Everyone had already finished their dinner. To make it up to him, the manager gave him a plate of 6 California roll pieces. 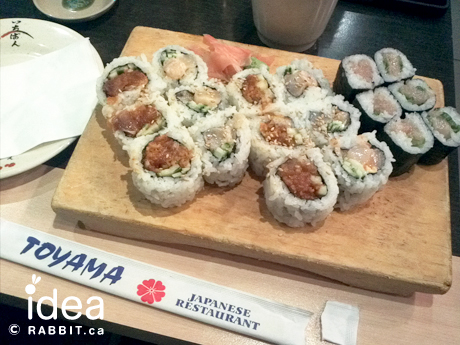 The food was okay. We needed to ask for the tea several times…my friend had asked for a second glass of beer, but that also didn’t come until the manager had come.

I was sitting about 5 meters from the entrance, and it kept blowing cold air from the outside every time someone left or came in. I was really cold. By the end, I was wearing my jacket.

We went there with a group of 12 people for the All You Can Eat at lunch. Starting price is $12.95,  but then since we ordered sashimi, there was $1 added on top. Remember that in most restaurants, they will automatically add the gratuity on your bill, so don’t tip twice! I’ve done that a few times T_T. In the end, for some reason, the cost per person came out to be $18.38. I’m not sure if the server just divided the entire bill equally which would have been unfair, since some people ordered things that were extra cost (ie. drinks, alcohol, ice cream). Since this is a meetup group – meaning that most of us are strangers, it’s doesn’t make sense to be paying for other’s people share.

When I sat down, I was already turned off by the dirty dish. The soy sauce plate had not been cleaned at all. It had dried up rice and hardened soy sauce still there! GROSS!!!

The servers are always busy, so we don’t get that much great service. They did put a big pitcher of water which was nice so that we could serve ourselves whenever we wanted without having to hassle and wait for the servers to fill them up. 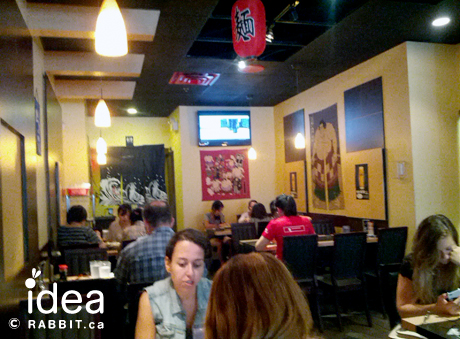 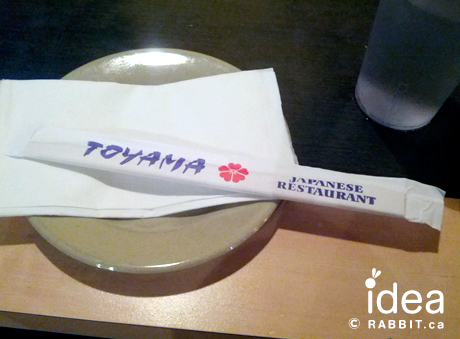 Make sure the plates are clean!

The rolls are pretty much the same – and there seems to be no distinction from one another. Blah. I didn’t even bother trying all those greasy deep fried stuff anymore. I’ve tried some before at Toyama, and other similar places, and they’ve never been that good. The only thing that looked good and was surprisingly almost like the Japanese version and tasted good was the Chicken Karaage. 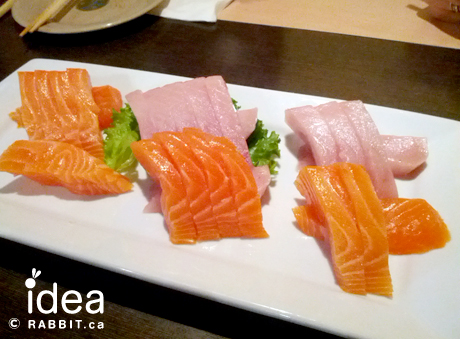 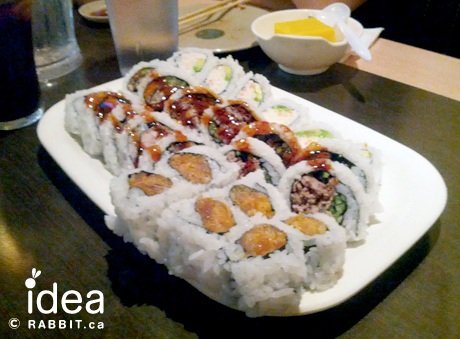 All the rolls taste the same… 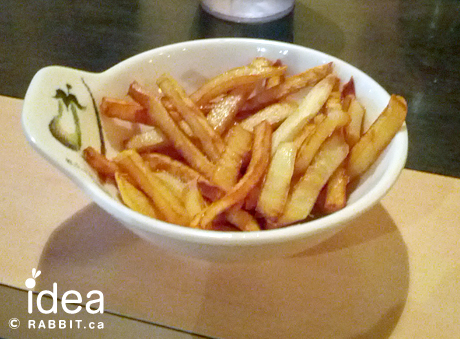 Extremely greasy and unappetizing fries that noone ate 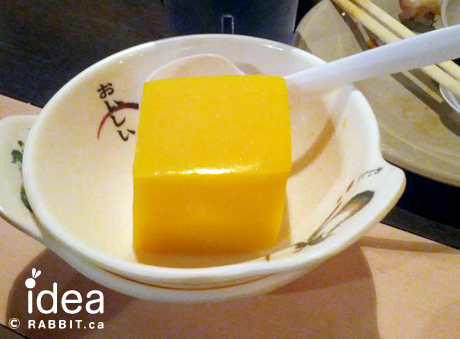 Mango pudding for dessert (ice cream is not included in AYCE)

Overall, it was way too pricey for the quality. I’d likely never return again. Events have quite often taken place at Toyama, and I had always ended up declining.