After having a good experience with the Broadway location and since I was craving some Mexican food, I decided to drop by the one on Davie. It was after 5pm on a weekday and it was pretty much dead empty with one guy paying at the till. 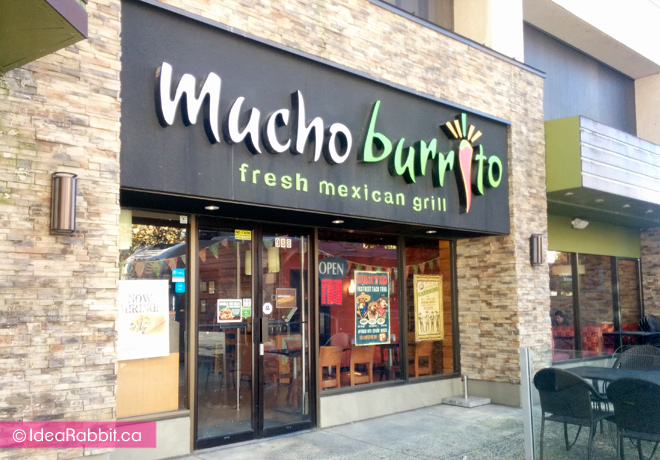 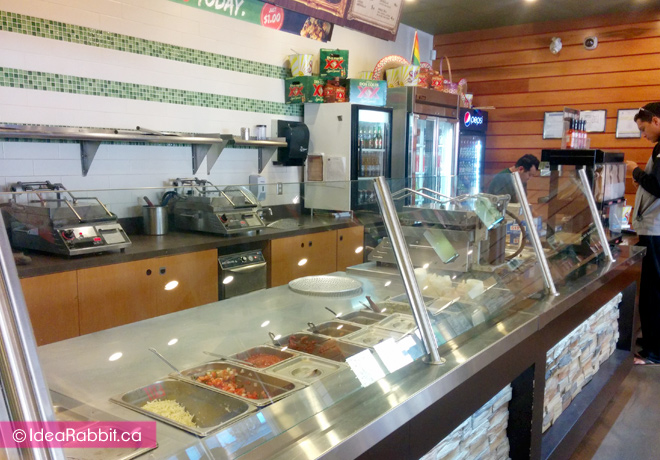 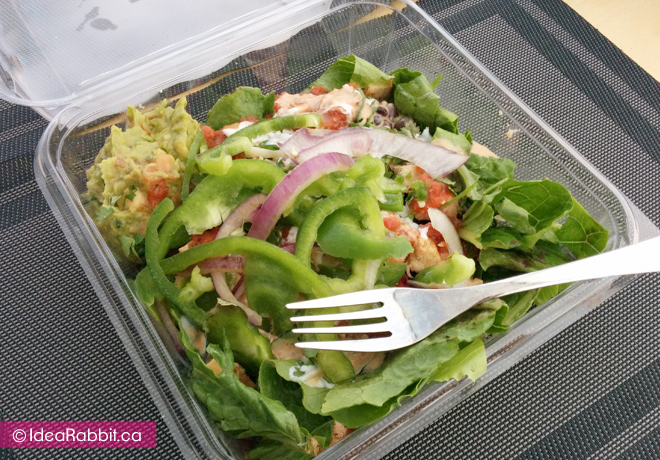 I ordered the Taqueria Salad $9.25 with chicken, veggies, beans and toppings. The staff fired up the fan to cook some onions and green pepper over the fire, but it was cooked too short as they were pretty raw. I didn’t mind the green peppers, but the thick onions were a bit of an attack on my taste buds so I put them aside.

Since it was take-out, it was served in a clear plastic box. 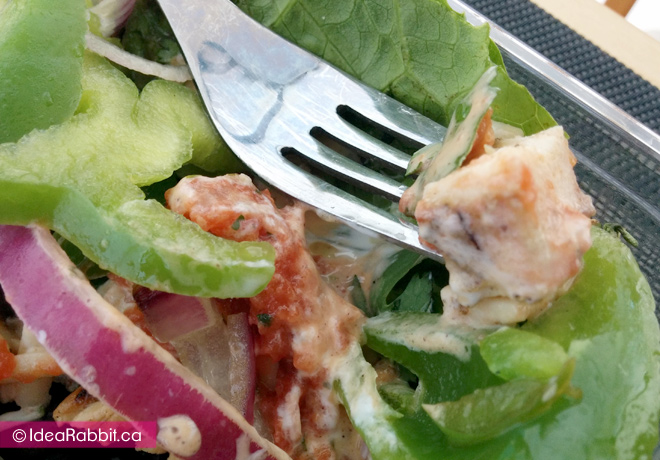 This time, I would have to say the flavour wasn’t a rich. The ingredients didn’t seem to blend together, and was no match for Chipotle…

Service was satisfactory but was a bit disappointed in the food this time. Perhaps it was just that time. Would give it another chance.

A Mexican cafe on Burrard. With pots of cacti and tacos available, it’s not your typical cafe. The staff is friendly, and we ordered a coffee (12oz) $2.25 and I tried a flower tea $2.50. Sheepie ordered a cookie, but it was hard, and not that really good.

Now, my tea was fascinating. I had never seen anything like it. When the staff brought over the glass pot with the blue flowers floating in beautiful blue water, it took my breath away. Just mesmerizing blue. When I poured into the white cup – which in itself was uniquely shaped. Love it! 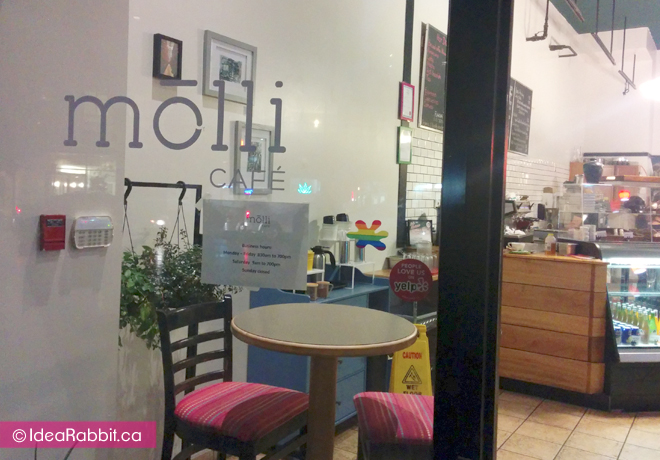 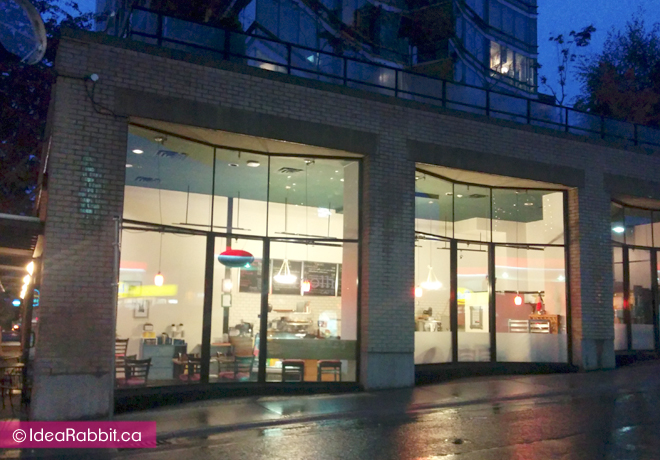 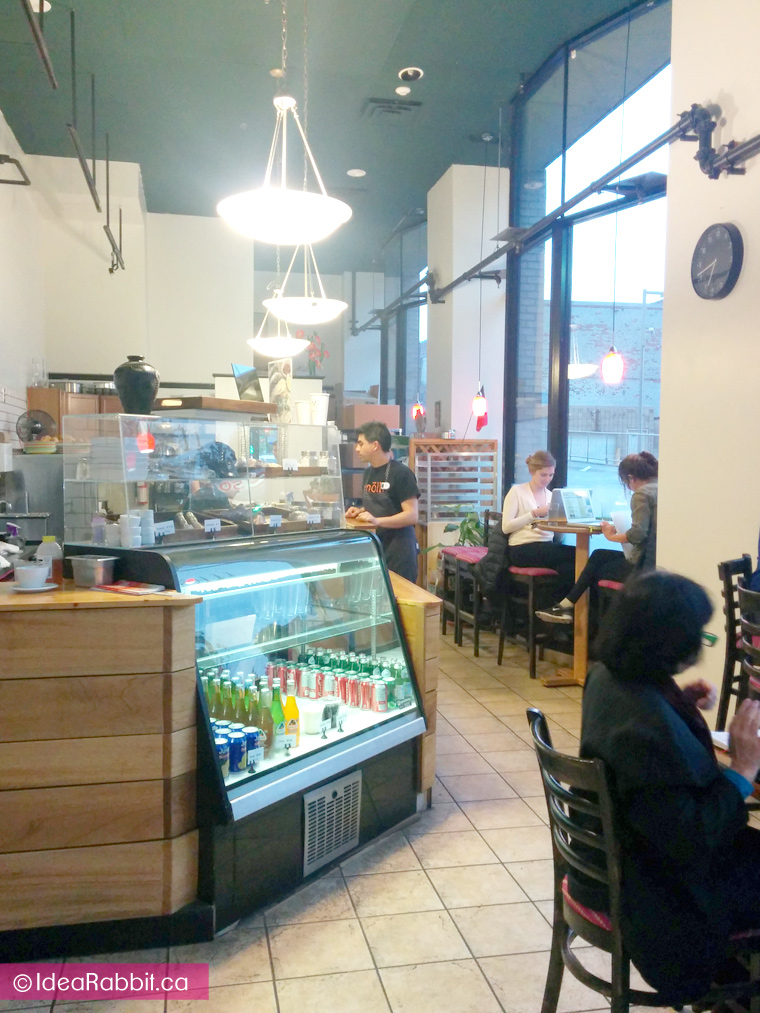 There was a slice of lime, and when I squeezed a bit of it, the tea started to change colour! The tea turned into a marble of royal navy blue and dark magenta. Or closer yet, pantone 2736 and 2602 – LOL. But I guess only designers would have pantone swatchbooks 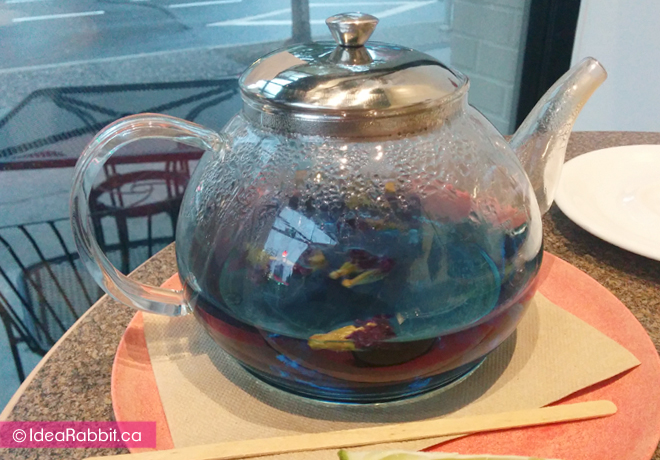 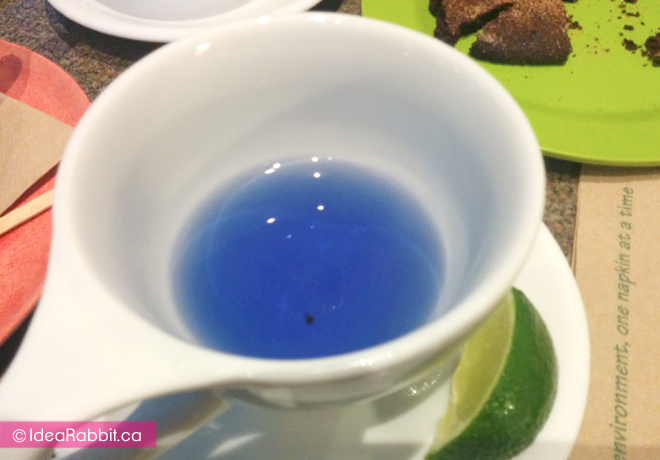 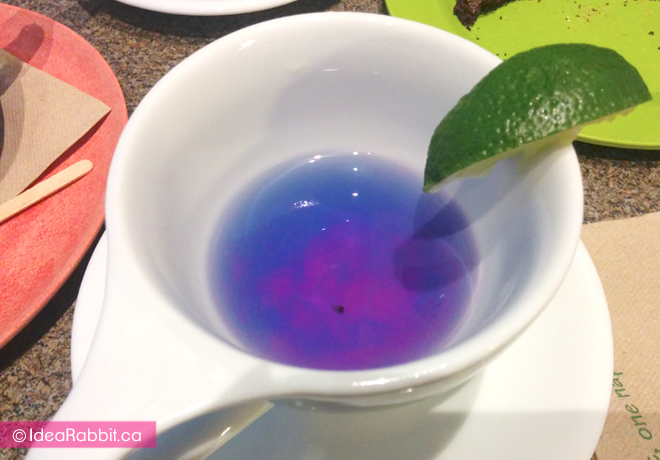 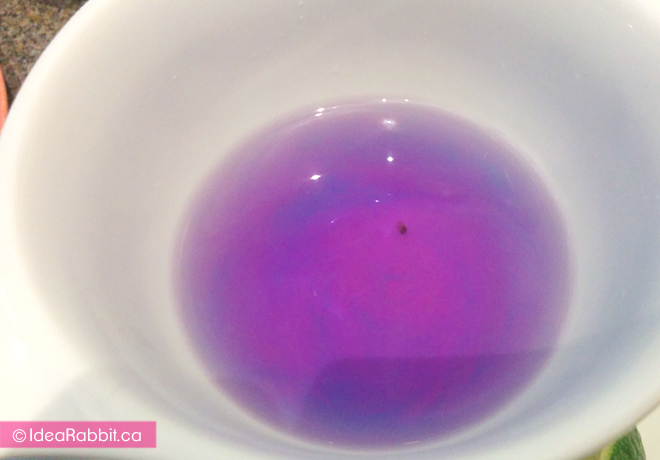 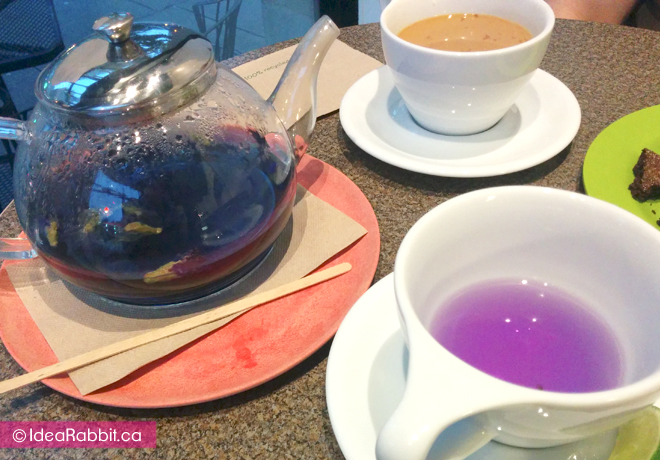 Anyways, the taste was herbal (hence caffeine free). It was different. Maybe not my regular cup of tea, but certainly entertaining to see.

When the staff brought over our order, he noticed that the table wobbled, and he got a piece of something to place under the leg of the table. Thanks! 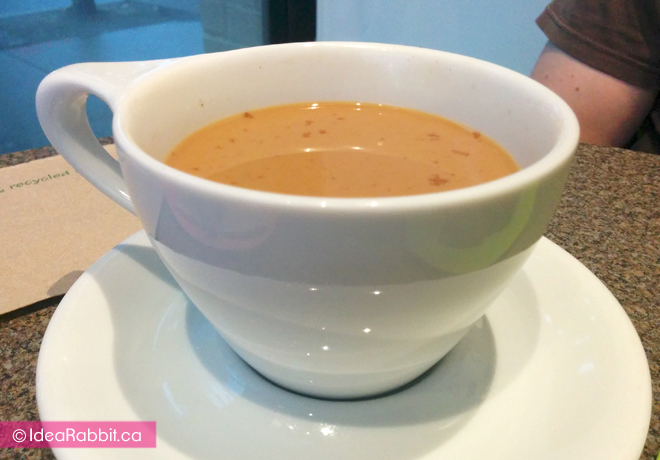 Even after they closed, they didn’t kick us out. (sorry, we didn’t know…). Would like to return to try out their Mexican specialties.

Every time I pass this place, it’s been super busy, at times with the lines going out the door onto the sidewalk – crazy. My friend has been eager to try it out, and since we were in the area after checking out the Vancouver Arts Gallery, we decided to give this Mexican place it a try.

It was already close to 9pm on a Tues night, but it was still half full with customers enjoying their food. The place has a modern look and targets young people. The staff weren’t friendly, but we got what we needed. They mumbled their questions on the toppings, so I and my friend ended up saying ‘what?’ or ‘excuse me?’ several times. 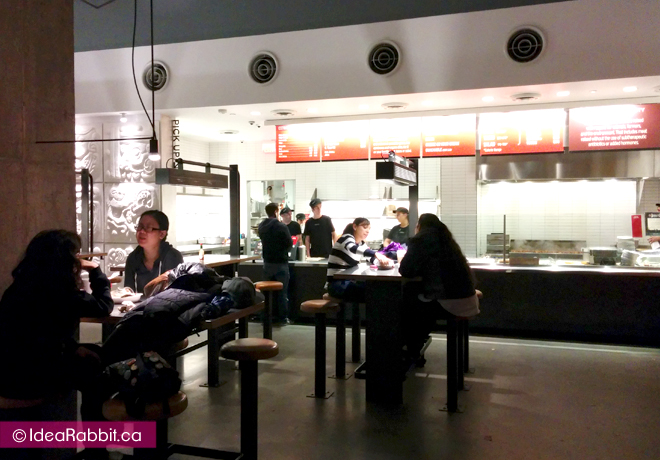 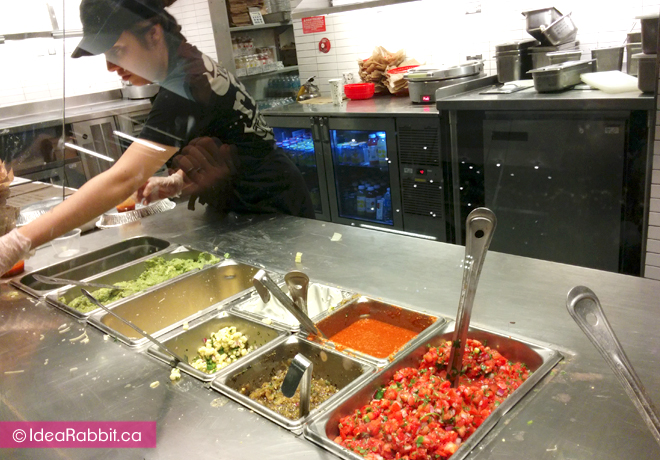 So like at Subway or Harvey’s you get to choose your ingredients. I didn’t know what barbacoa (beef) and carnitas (pork) were, so I had to ask. I went for the grilled chicken which is marinated in their spicy, chipotle-chili adobo. I had all the toppings such as beans, rice, salsas, cheese, sour cream and romaine lettuce. Guacamole is the only thing that costs extra (I think 50 cents?) so I didn’t get it. The bowl looked pretty full already anyways. 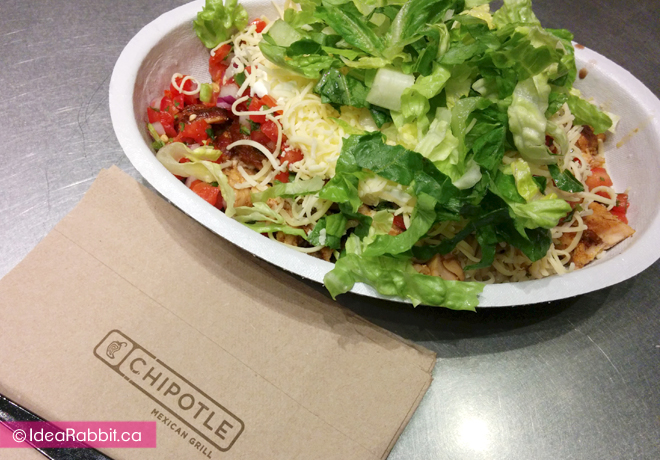 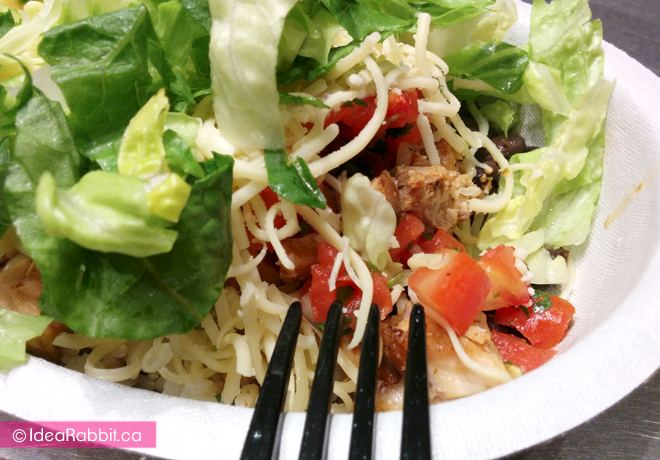 Comes out to $8.95 + taxes. At first, I felt it’s a bit pricey, but then when you think of the food from food courts which is usually around that price range, then it doesn’t seem that expensive. The rest is self-serve (like other fast food places) so go fill up your own cup (if you order a drink), pick up napkins and utensils. 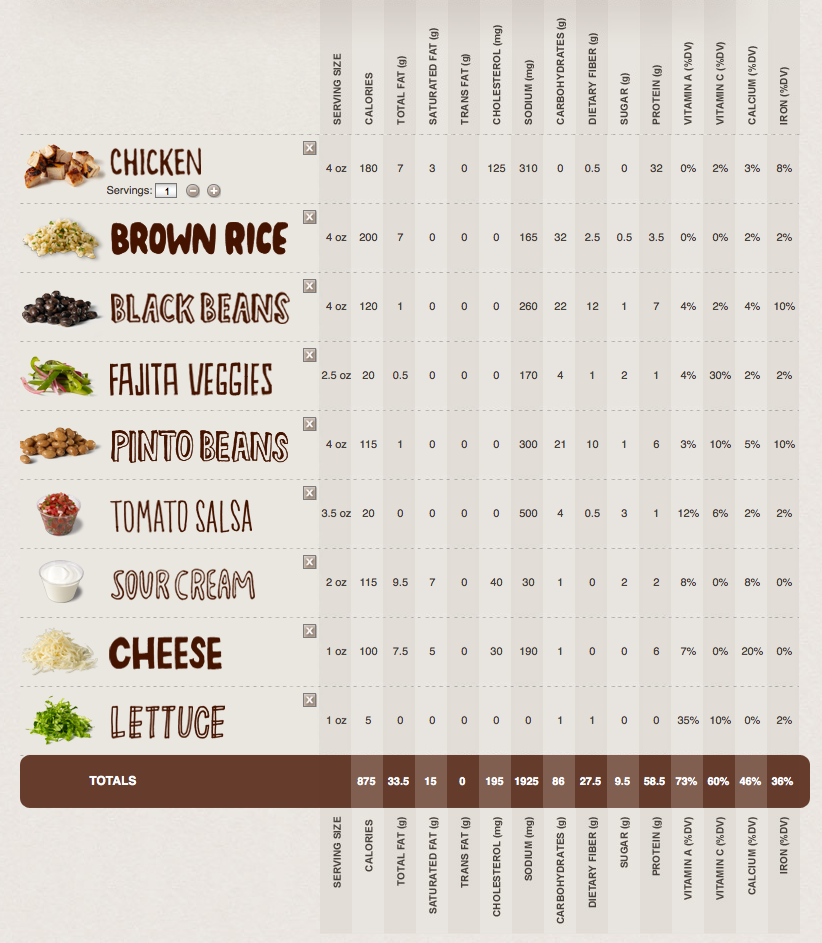 Online, you have the chance to check out the nutrition intake by selection the ingredients that you chose. Note: if you order everything including the guacamole, it’s over 1000 calories dish! 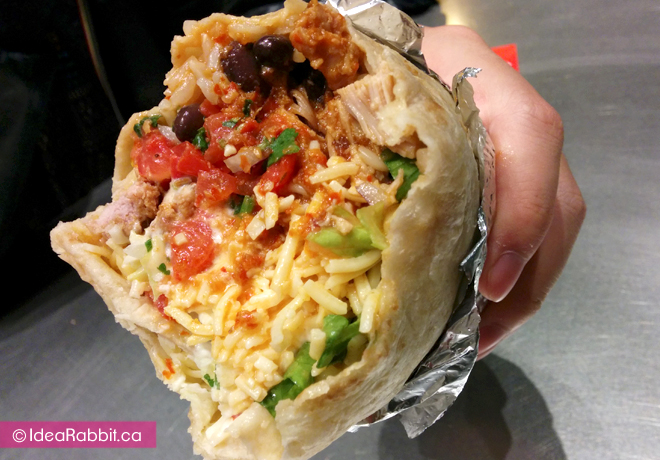 My friend pretty much had the same thing I did, but in a burrito instead of a bowl

But the quality of the food is very good. The taste is addictive and it’s quite filling. Since it was a bit late, my friend only wanted to have half – he ended up eating the entire thing lol. I can see why they are so popular. I would like to go back to try out their other meat choices!