We were looking for a place to dine for dinner, but it seemed like everywhere on 4th Ave was really busy. We stumbled upon Connie’s and Sheepie suggested we try, even though it was pretty empty, except 3 diners.

The interior was colourful with yellow checkered table cloths along with metal, iron looking chairs. We ordered the House Special Chow Mein $10.95 and Kung-Po Chicken with Peanuts (hot) $11.25. The food arrived promptly. 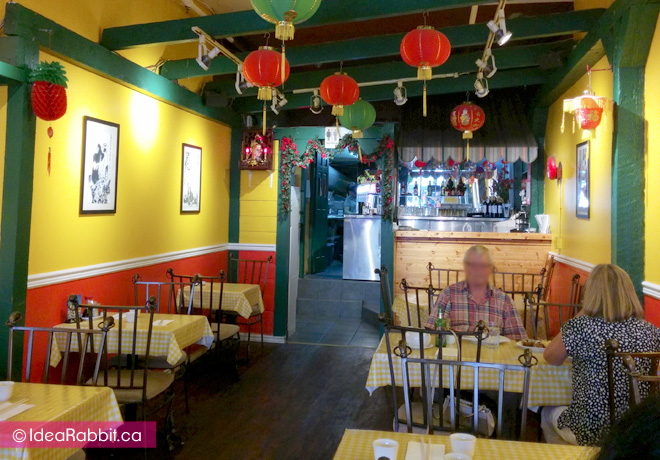 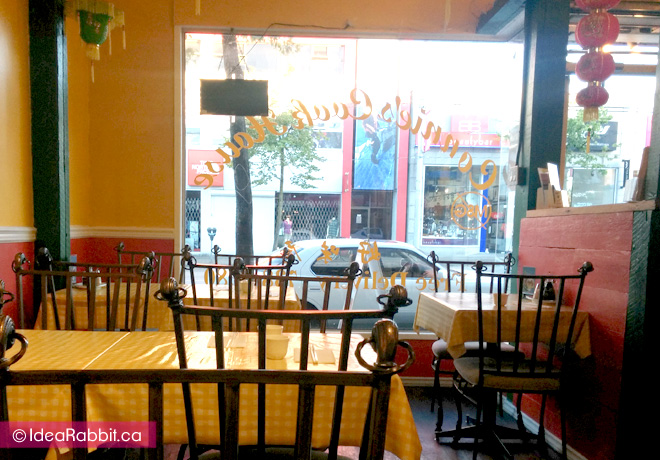 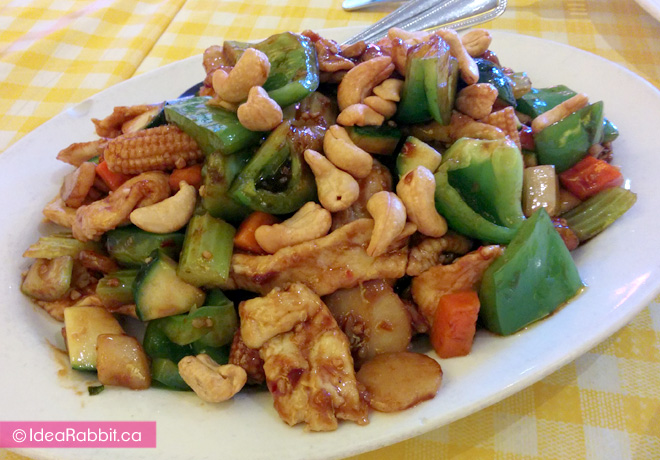 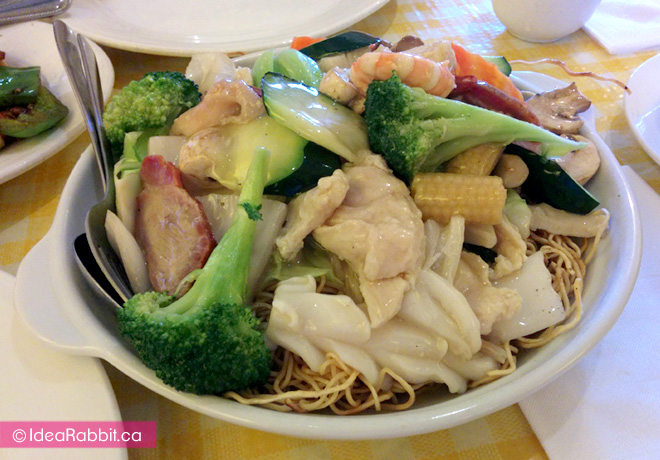 The Kung-po was topped with deep fried cashew nuts. The sauce was really salty and heavy in soy sauce, so that must be the reason why the server asked if we wanted rice. But since we had the noodles, we had declined. The baby corn (my favourite) had an odd ‘off’ taste – not fresh…though they were likely from cans, so I guess not fresh, but nonetheless, I avoided them after trying 2 bad ones. Portion was pretty good.

The noodles on the other hand was really bland. Chicken were tender, but was wary on trying any of the seafood after the bad fortune with the baby corn. I was skeptical of their ‘freshness’ of the food. The noodles were crunchy and there was plenty of sauce. We mixed the Kung-po and this dish to ‘balance’ out the saltiness. Portion was decent with lots of veggies, chicken and seafood.

Service was satisfactory. Food was ok, but not enough for me to actually make effort to come back for.

This year, I only got to go out to one Dine Out – and it was at the Boathouse by Kit’s beach. I was thinking of going to the one at English Bay, but after seeing the terrible rating, I decided to dine here instead.

A nice open restaurant which can potentially have nice views if you get to sit by the all glass windows on one side.
We both had the $28 3 course menu, each of us ordering a different dish for each category. 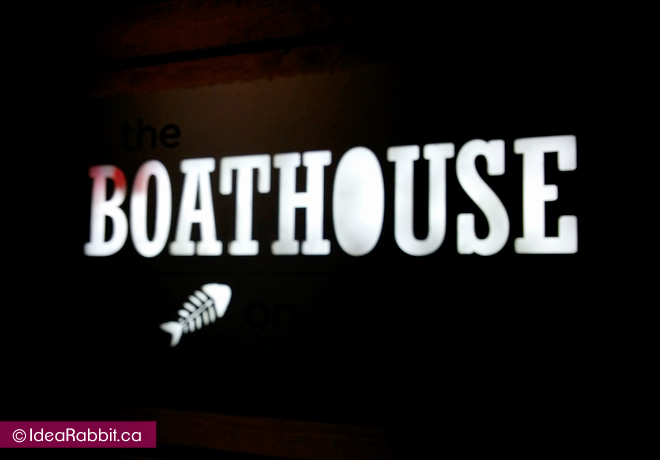 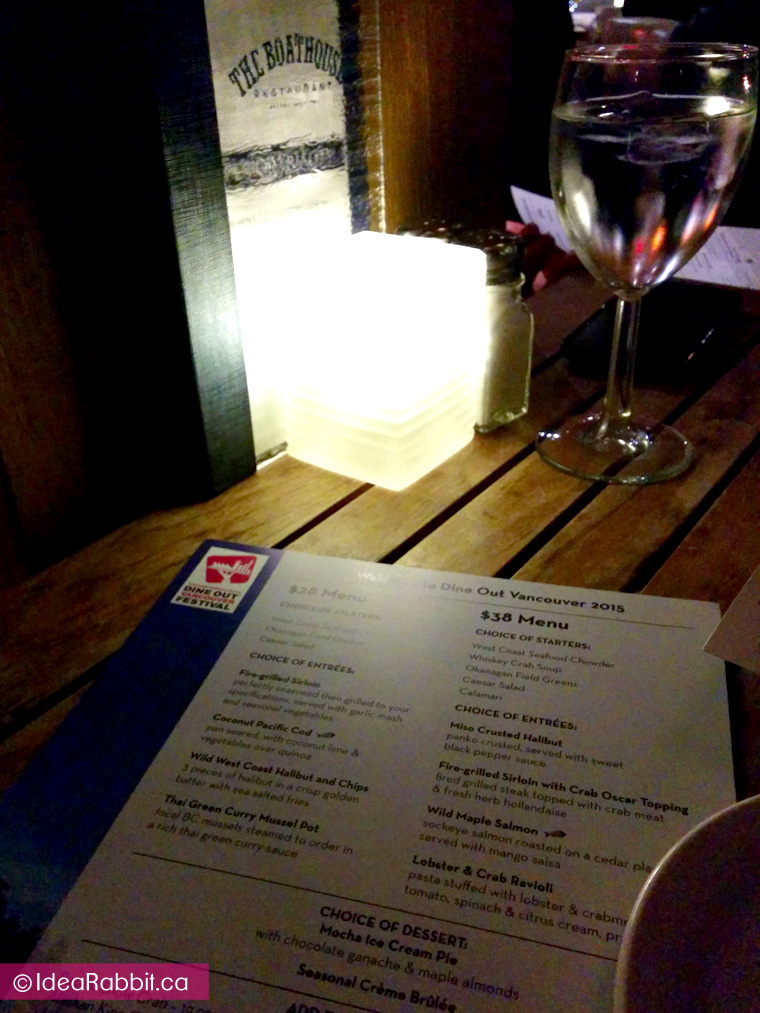 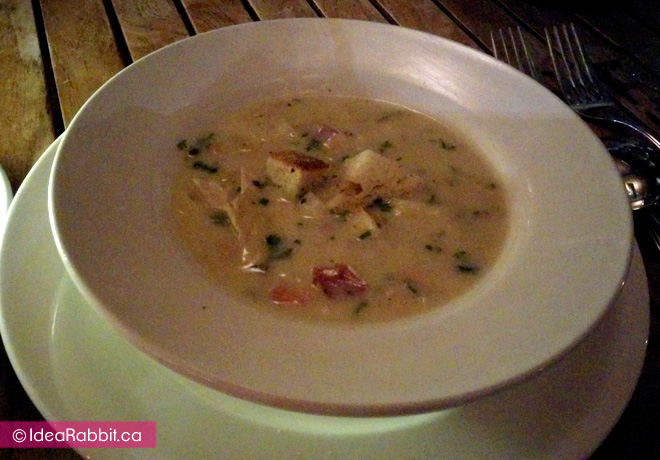 For appetizer, I ordered the West Coast Seafood Chowder. It was really delicious with a lot of goodies inside. Very flavourful soup! The regular price of $5.99 is very reasonable. 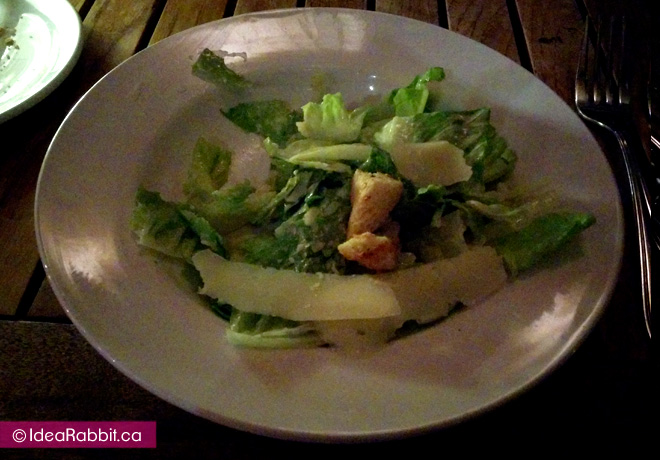 Sheepie had the Caesar Salad which seemed a bit boring with only greens and a few croutons and cheese. Regular price of $8.99 is outrageous. 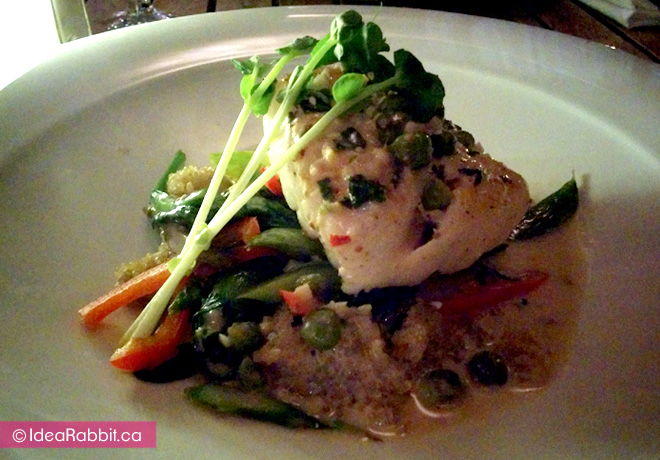 For main, I had the Coconut Pacific Cod (reg $24.99), pan seared with coconut lime and vegetables over quiona. Everything I love on one plate! Mmmmm! The portion was good and though slightly too buttery (in the cod) for my liking I felt the overall dish was healthy and delicious. Sheepie had the Fire-grilled Sirloin with garlic mashed potatoes and veggies. 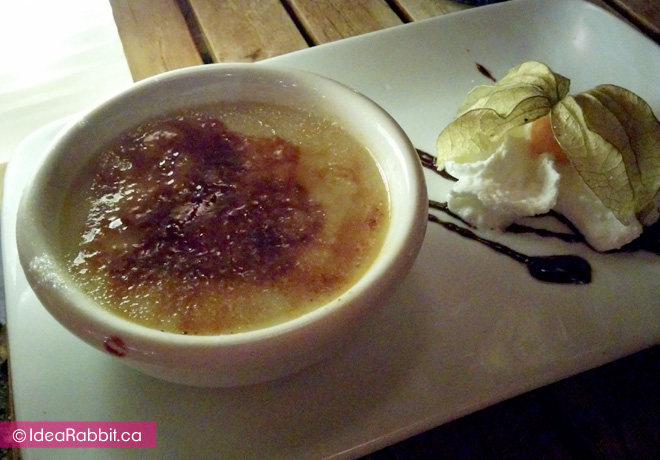 For dessert, I had the Seasonal Creme Brulee which was very rich and I loved it – perhaps the most impressive one I’ve had…though a bit pricey for regular price of $8.99 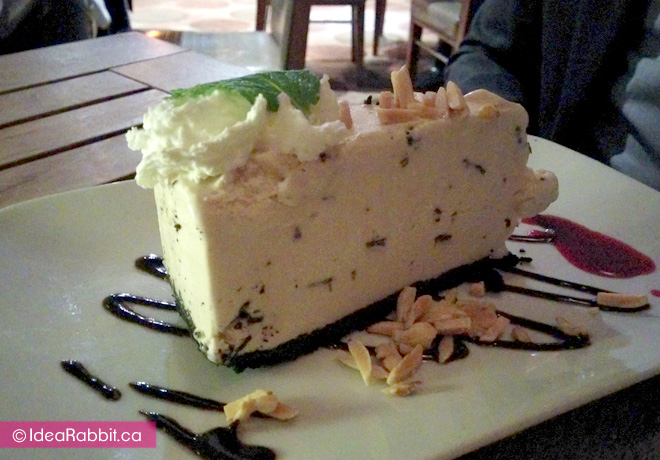 Sheepie had the Mocha Ice Cream Pie (reg $8.99) which came out to be pretty big in size. I was expecting something much smaller. I didn’t each much of it since it had maple almonds.

Our server was satisfactory and professional. I can’t be sure 100%, but when he came by to put down the steak knife for Sheepie, he took the regular knife on the table. The restaurant is dimly lit, and I wasn’t keenly watching, but I thought I saw him go over to the table behind and diagonally from Sheepie and place the knife for the lady. Uh…. I hope I’m mistaken. Yes, the knife wasn’t used, but how does he know that for sure? We could have used it already.

The restrooms were a mess – which was totally unexpected from a place like this. Luckily, I saw a staff start cleaning when I was about to leave.

For $28 per person, this was a great deal. On a regular day, it would have already been $25 just for my cod. However, I am not sure if I’d return for the regular price, though perhaps the atmosphere would be different if we were actually there at the time of sunset – with the view of the sandy beach and waters, and the sinking orange disk illuminating the vast sky…ok, maybe back in the summer time…

Price for Value (for regular):

I had a Social Shopper voucher for 4 people. Located on Broadway on the second level, it is quite spacious and nice, I was surprised of the lack of customers on a Friday evening at 7pm. The seats were golden and red clean seats, nice curtains and decor and overall very clean. The red neon lights that came on during our dinner was odd, but to me, it wasn’t that distracting. 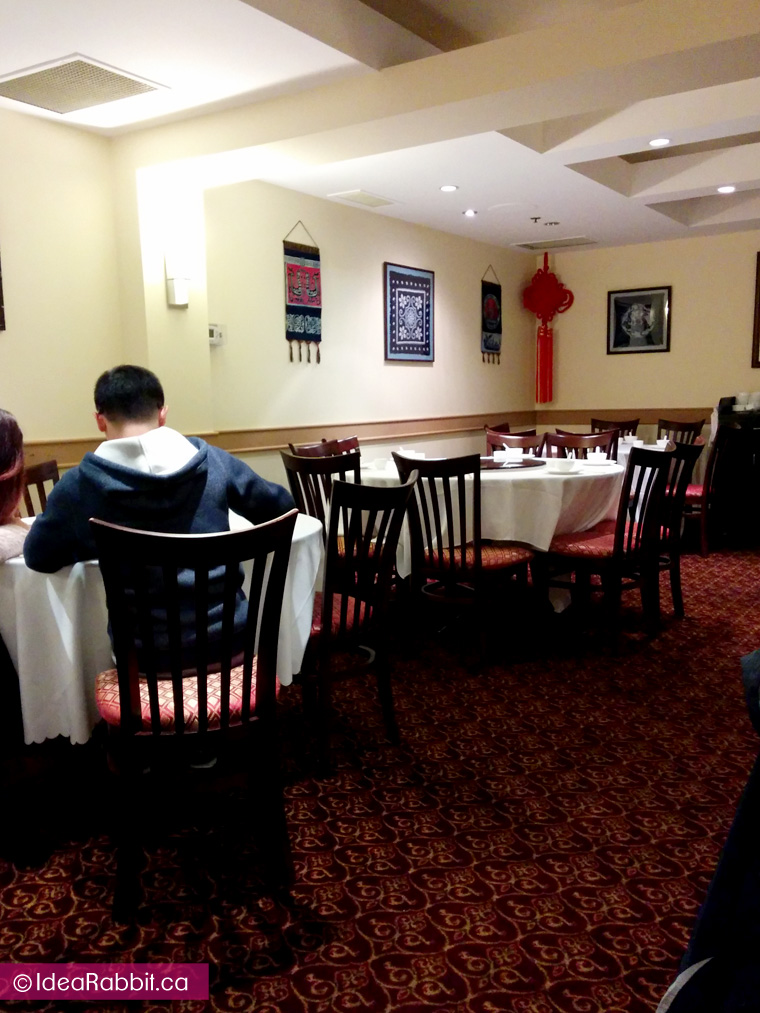 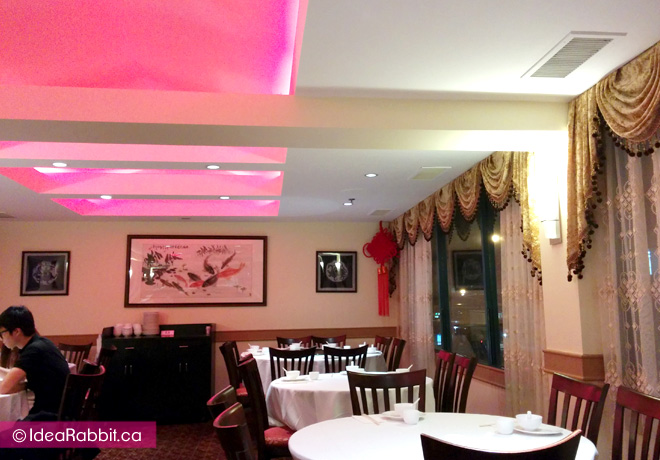 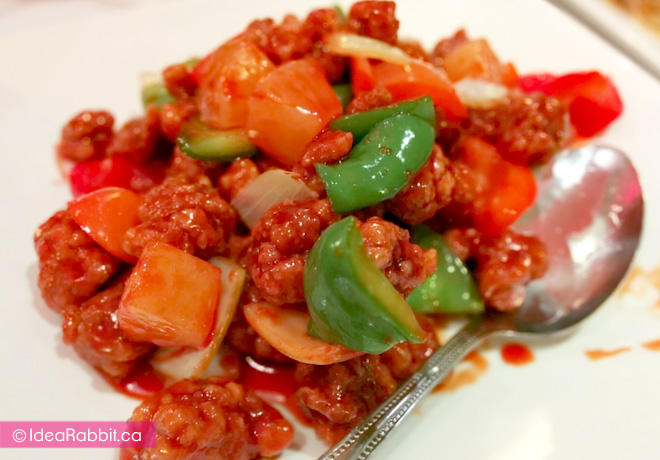 We ordered the Sweet & Sour Chicken $12.98 which was really crunchy and not soggy like the ones you get at food courts which could be sitting there for a long time. 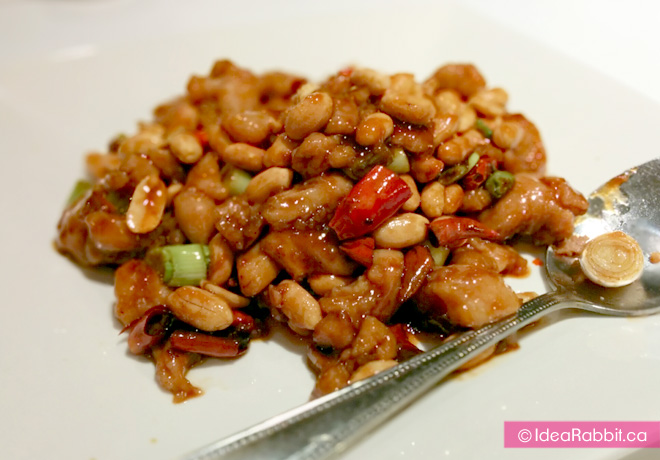 Kong Pao Chicken $13.98, unfortunately had peanuts in it (like whole chunks), so I had to avoid the dish altogether 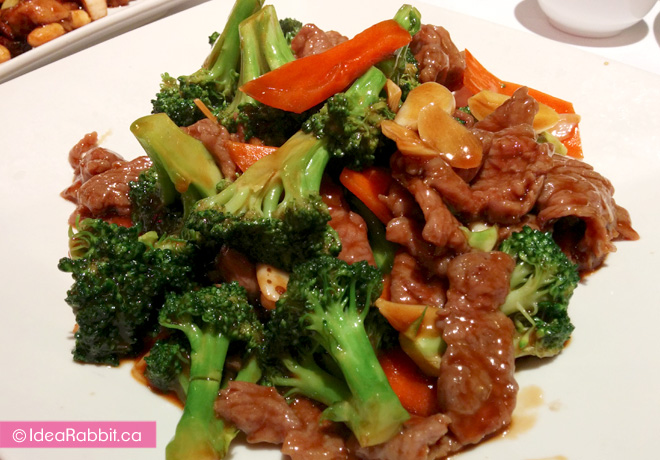 Beef and Broccoli $12.98 had a good flavour that went really well with the bland fried rice. 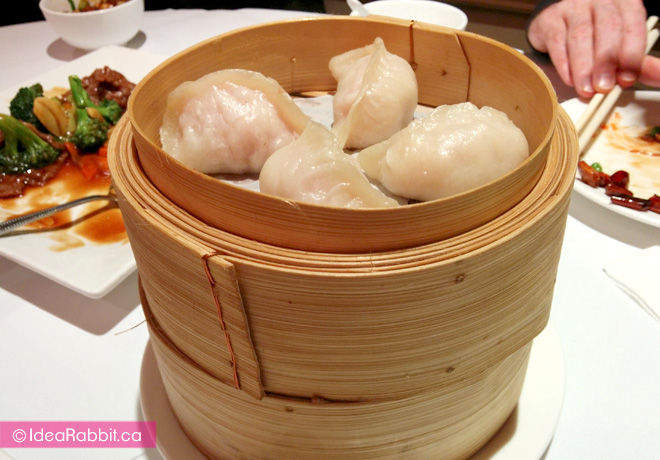 2 orders of dumplings $6.98 each, so 8 pieces in total were on the dry side, and my Chinese friend said that the skin was too thick. My Taiwanese friend on the other hand didn’t mind them. 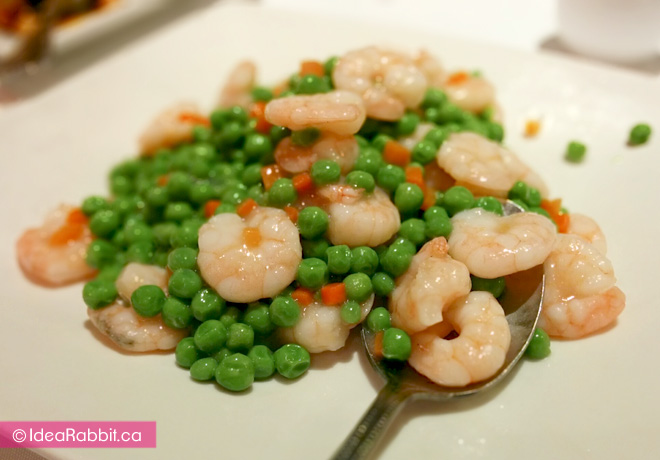 Shrimp with Peas $16.98 had sooooooooooo many peas. It was little shrimps buried in a ball of greens. It was still good, but not worth $14 for mostly peas. 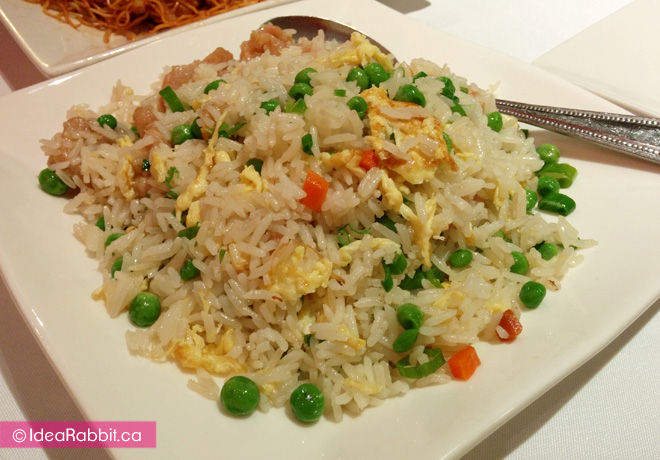 Fried Rice $8.98 was bland, but since the other dishes were salty, it was ok. 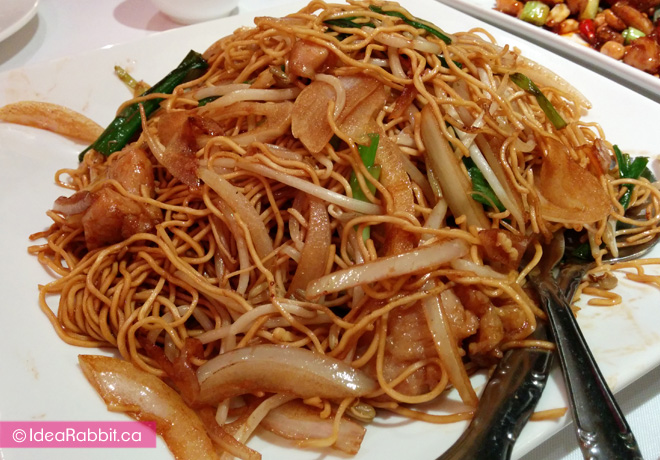 Noodles $8.98 were ordinary. Nothing special to note. 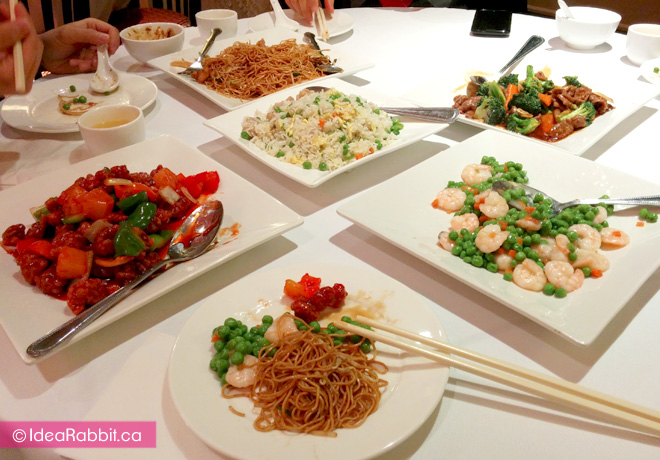 I actually didn’t know the prices of the dishes until blogging about it later on. When we arrived and told them we had a voucher, they brought a notebook (paper notebook – not the electronic notebook) that had lots of writing. Inside the cover, they had a paper stuck onto it with the available list of dishes we could choose from. It seemed worn. For a higher-end restaurant, this seemed so cheap. Perhaps I’m a designer that I take this into account, but if they printed out a sheet and can only keep in a notebook that is crumpled and used, how much more effort is it to print it out on one single letter-sized paper to present it like a real menu to the customers instead of trying to check in their notebooks with scribbles and notes inside?

The servers seems to be family members? Not too sure, but the two young girls seems to almost being forced to work there by their parents. They don’t really seem to care much about giving a pleasant service.

Now seeing the prices, they were definitely not worth the prices they were charging. The Shrimp and Peas is outrageously expensive for a can of green peas and a little bit of shrimp. Over all, everything was too expensive for the quality and delicious-ness.

It was filling and nice experience, but I would not go back for their food for regular prices.

My company took us out for lunch at Bashu. It was during the weekday, and though it was around 1pm, the restaurant was a little more than half full. We sat by the window. 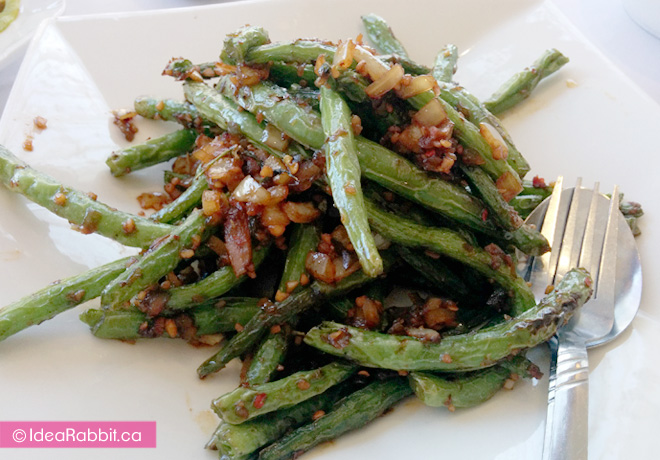 Stir Fried Green Beans were quite salty, but would go really well with plain rice. Even one staff who had never gone to Dim Sum seemed to like this one the most. 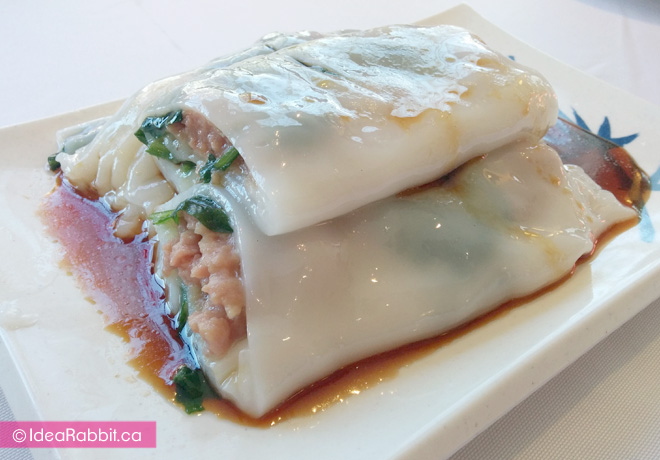 The Rice Rolls were the best I’ve had at any Chinese restaurant so far. It was quite flavourful. My company had asked for two servings of sauce, so it was tasty. The Singapore Style Noodles $6.98 were quite spicy and since both of us weren’t too fond of spicy (actually, I love spicy food, my tummy on the other hand begs to differ…), so we decided to take-out for one of our other coworker who likes them. Xiao Long Pao (dumplings), didn’t have much juice in them, but still tasted good.

Calamari Squid was hot (temp) and cripsy, but I thought it was too salty.

Tan Tan Men $7.98 had to be stirred after the server brings it to your table. It was sprinkled with peanuts, so I had to pass.

Beef with rice patty was deep fried. It had a heavy sauce wrapped inside. It was pretty good.

Take Out for Lunch

I had a take out order this time. I had their Chicken Chow Mein $8.95 which surprisingly came with a mini hot and sour soup and veggies, mostly cabbages. Hot and sour soup: too spicy and heavy on the soy sauce. I usually love this soup, but theirs was too spicy for me. I didn’t finish it.

Veggie: It is a cold dish, which I didn’t mind. It had a good herbal taste, but the red chilli peppers made it spicy, leaving my tongue tingling.

Overall: Good price for portion, but the flavour isn’t to my liking.