The place was packed. We had to line up for about 20 minutes in the cold outside. There were 5 of us, so a little tricky seating us in a small-midsize restaurant with limited space. They were playing hip-hop music.

I ordered their signature bowl, Tsukemen $11.95 You have the choice of shoulder, belly or both. I chose the lean one – shoulder, and to be served warm. I was surprised to see the contents in Japanese (romaji)…who will know what it is if they don’t understand Japanese? It has 2 slices of pork chashu, negi (green onions), memma (flavoured bamboo shoots), aji-tama (flavoured egg), and nori (seaweed). For the broth, you have the option to get the original (which I got), spicy and karamiso (spicy miso). 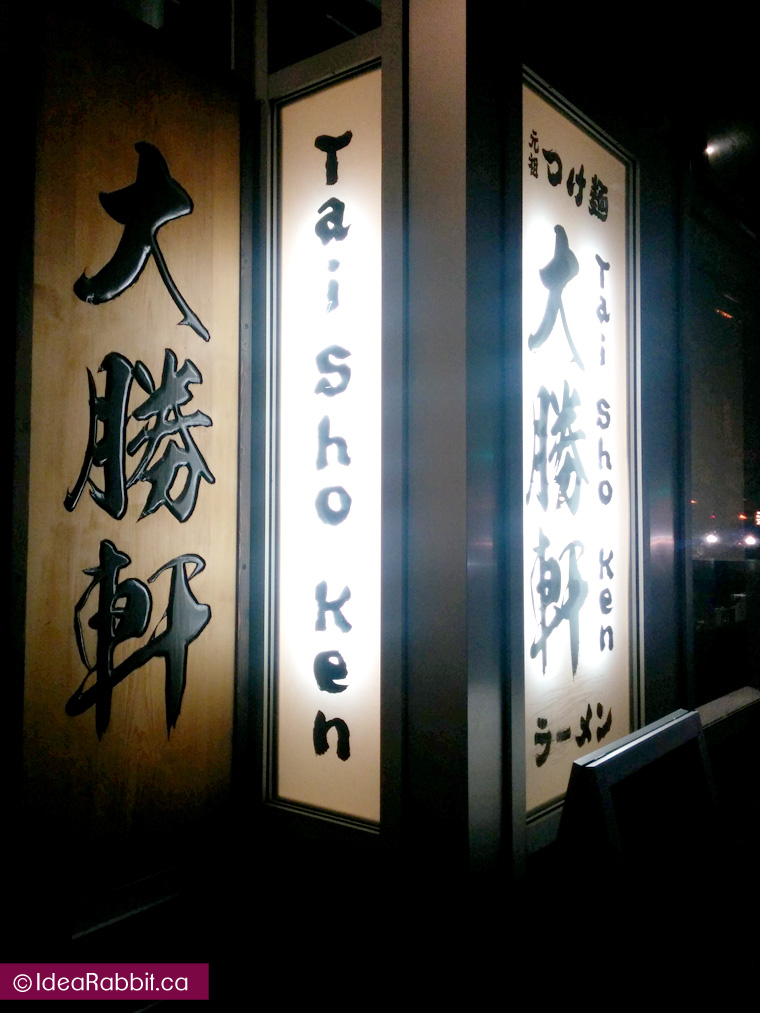 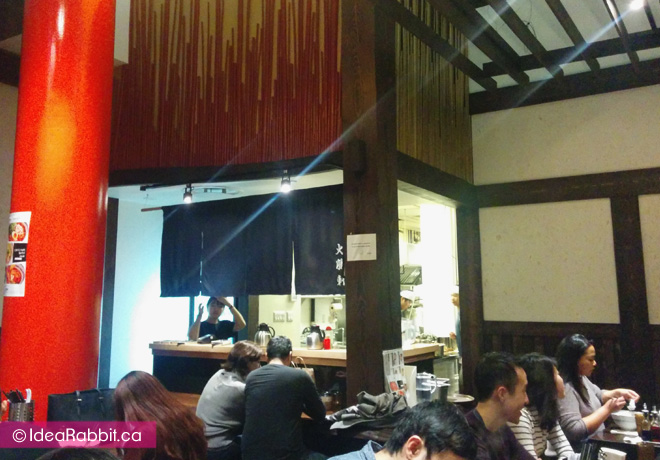 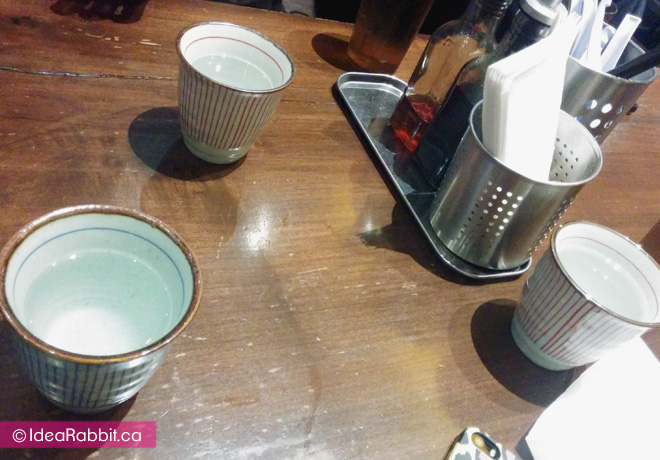 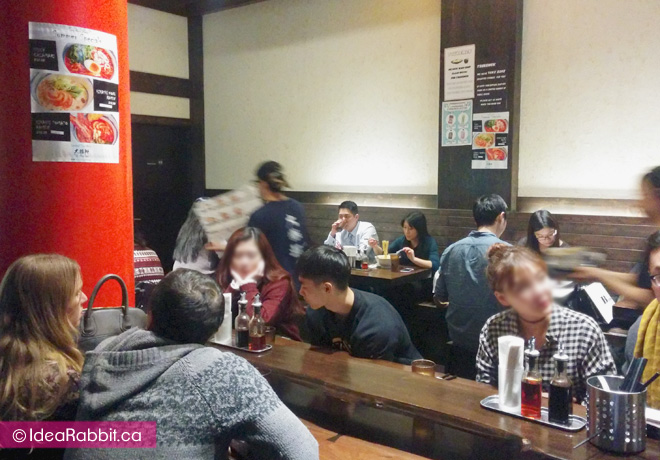 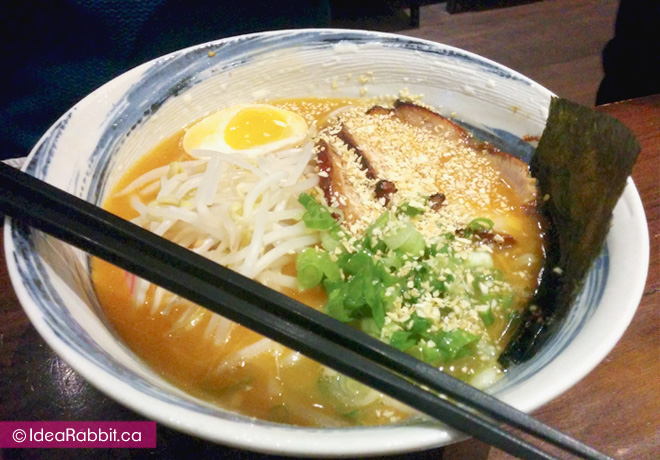 1 friend ordered the Tonkotsu $9.95. He liked the noodles, but wasn’t all that impressed by the broth. He liked Danbo’s broth more which we had tried a week earlier. 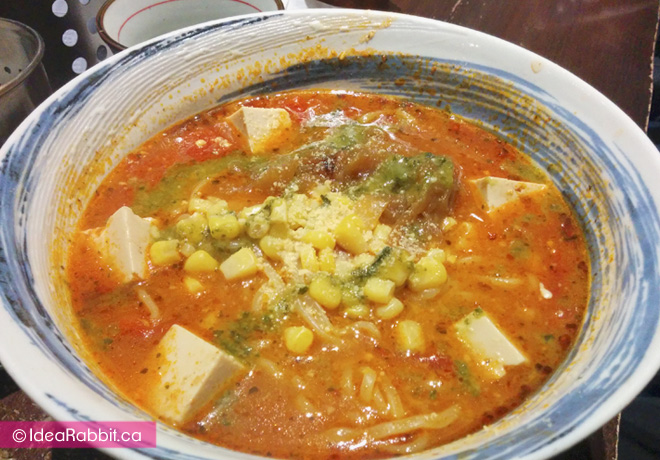 Another was brave to try out the Tomato Cheese $12.75, and the other 2 had the Tsukemen as well. My friend with the Tomato Cheese was not happy. We all had a bite and it tasted like tomato pasta or pizza. It wasn’t at all Japanese like, and it didn’t really go well with the pasta-tomato like sauce. And tofu in a bowl of ramen? Friend’s rating: 2/5 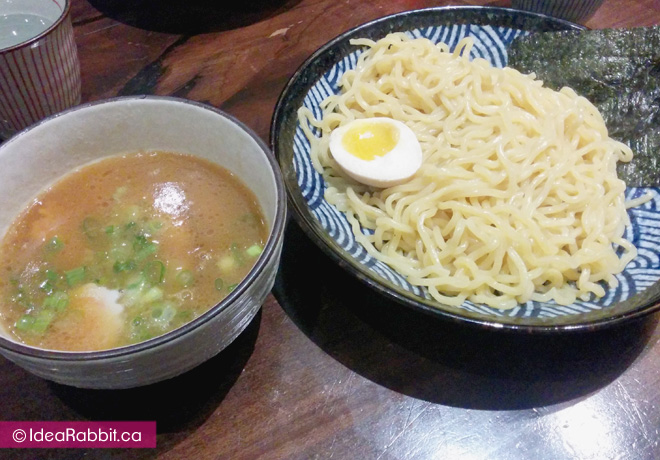 My broth was rather lukewarm. I told the others which was their first time trying a tsukemen ramen that the broth was usually quite concentrated and salty since you were suppose to dip a bit and not ‘dump’ all the noodles in it for a long period of time. 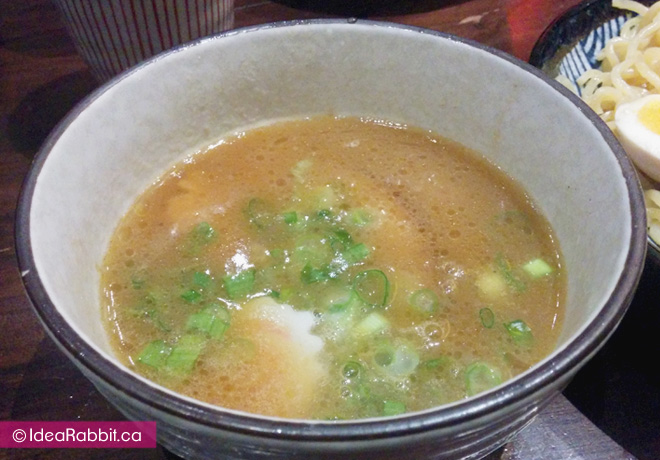 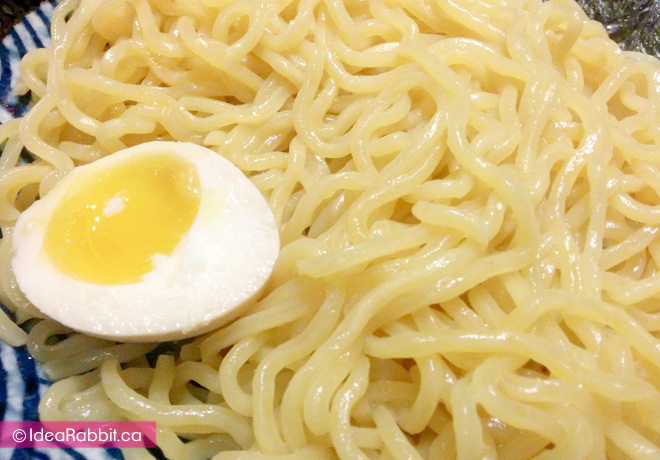 It was a bit embarrassing to find that, that was not the case. I ended up putting all the noodles into the soup bowl. It lacked a richness to it. It was ok, but would not order it again. My rating: 3/5 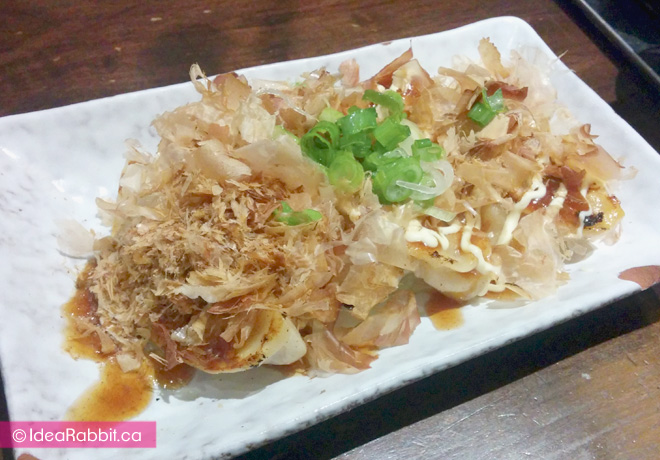 I also ordered a Okonomi Gyoza $4.50 to try out with everyone. Luckily, it had 5 pieces. It was interesting…just bonito and okonomi sauce on gyoza. (If you order the side sides with a ramen bowl – which I suppose most would be having a ramen, the side orders are only $3.50)

Service was satisfactory. I would like to try something simple, like the Torigara next time to try out a ramen in a soup base before I conclude my final decision on the place. That means I’ll be back!

The second location has opened for Danbo on Robson. The unfortunate thing is, they took took over the location where a previous Ramen-ya used to be, Maruko Ramen, which was one of my favourite ramen-ya. So sad to see it go… But will the new ramen-ya be just as good?

The interior was a bit different, but a lot of it was from Maruko – like the cubed wooden chairs where you could open the seat lid and place your items inside. Convenient for a small restaurant. 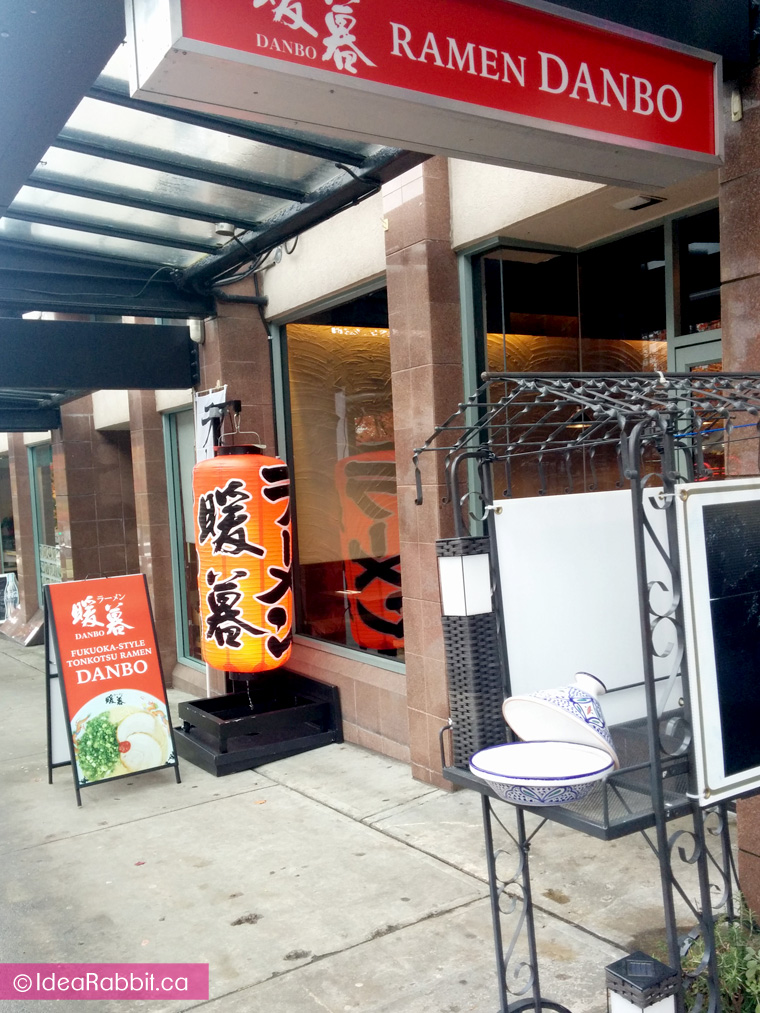 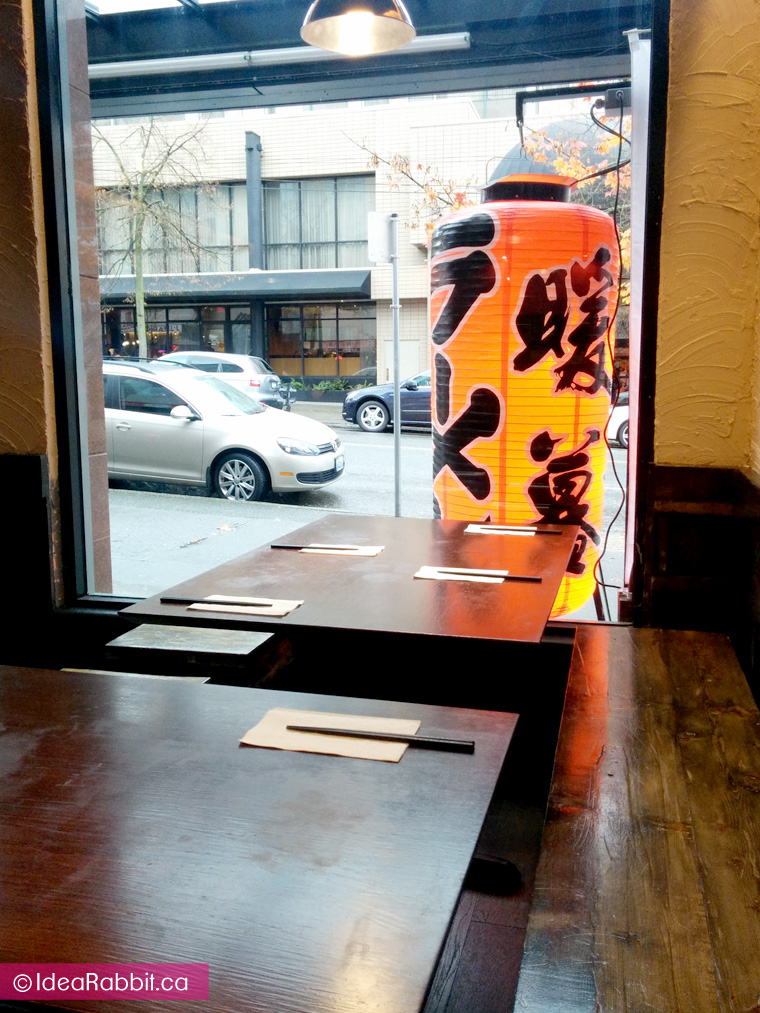 A friend of mine knew the person running the restaurant, so despite my negative review for the one of 4th, I thought I’d give it another try.

We met for lunch at 11:30am on a cold, drizzling Saturday. The place was bare, and there was only a single man eating. There were 3 front staff. 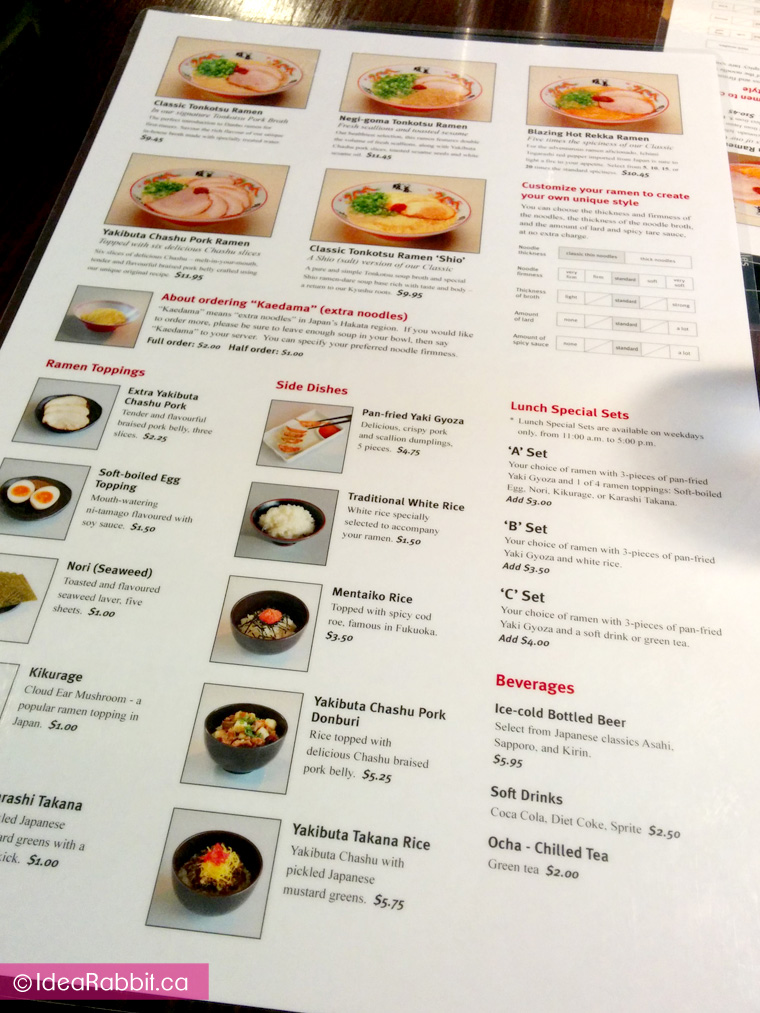 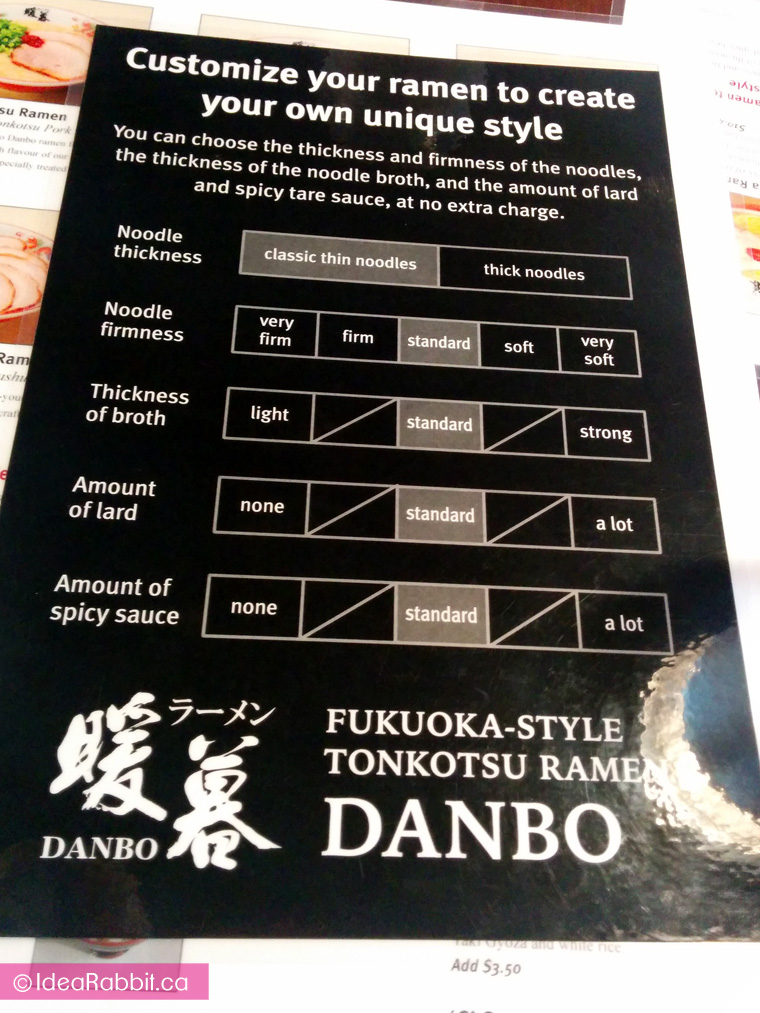 I ordered the Classic Tonkotsu Ramen $9.95 this time, with thick noodles, standard firmness, light broth, no lard and standard spiciness. This time, the noodles were the thickness that I was used to, and loved. However, I and my friend both found it a bit too firm once again. If I ever go back, I will ask for soft. As I got closer to ending my bowl, the firmness got a bit better as it soaked up more broth, which was light and good. Next time, I would completely take out the spiciness (the mountain of red stuff) as since it seems to completely mask the good pork broth. 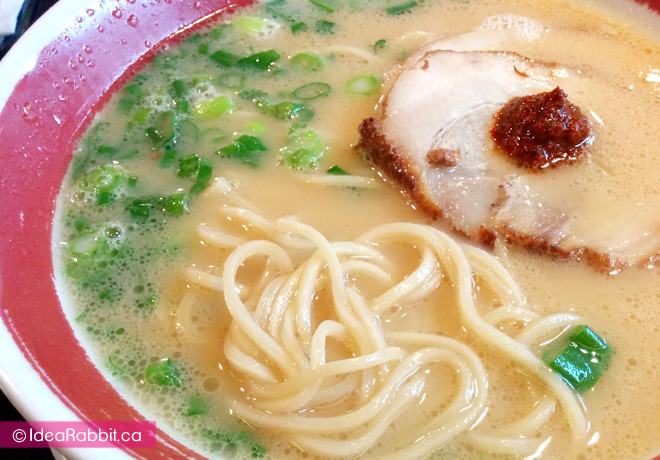 As time went by, there were 2-3 other tables, mostly in pairs that joined for lunch. By then, there were 5 Japanese female staff, standing there, having not much to do. I felt like so many eyes were on us. It did feel a little uncomfortable.

I know they’d like to make the experience as authentic as possible, but the staff’s name tag had their names written big – in Japanese, and in romaji/English in small underneath, barely able to read. My Japanese is super rusty, and I couldn’t read any of them. Even worse is the fact that names in Japanese characters have so many ways to read them (sometimes uniquely for names only), so that even Japanese people can’t always read names. Though not sure how important knowing the names of the staff is… My friend had the Blazing Hot Ramen. Every time they served a bowl, they all shouted “Goyukkuri meshiagarikudasai”. I guess that can be translated to ‘take time, enjoy the food’. Staff in Japan do say that to you directly, but it was the first time that the entire staff shouted. It doesn’t bother me – cuz I understand it, but for the majority, I doubt anyone does, or even notices. If they’re used to Guu, they’d think Japanese staff are always shouting something, lol.

But service was excellent. English for some was a bit of trouble… but no major problems.

Shout outs of “Arigatougozaimashita” (thank you) echoed as we got up to leave, and our main server helped open the door for us.

Although the ramen was better this time, it’s still not the kind of ramen I’d go back for on my own.

I know Guu is really popular, and their food is good. However, I just can’t stand all the yelling and hustle and bustle of Guu’s atmosphere. It’s just not my thing. Nor is it Sheepie’s. But we were invited to a friend’s birthday dinner being hosted there, so of course we went. It was also the first time that I would go since becoming a food blogger, so I thought it would be a good opportunity to really assess the restaurant. I started off with the Ebi Mayo $8.20. Very crunchy on the outside, and plumpy shrimps inside.

The staff was shouting out orders, and since the place was so noisy, people at our table were talking really loud. I had ringing in my right ear afterwards.

Unlike most ‘Western’ style restaurants where the server remembers what you ordered, dishes were placed randomly where there was space on the table. This made it a bit cumbersome since there were 13 of us at the table, and we had to figure out who ordered what. 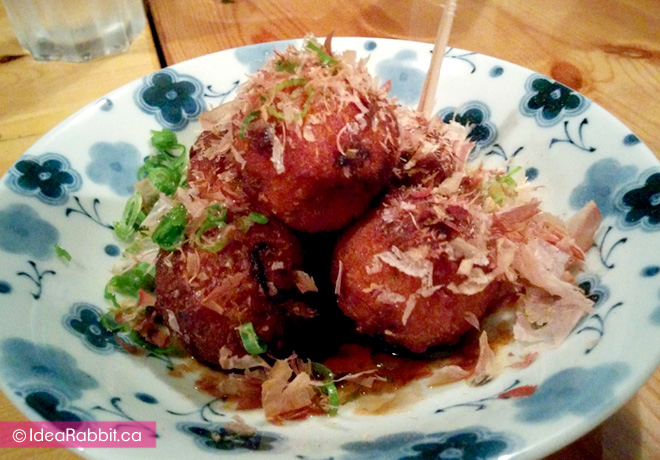 The Takoyaki $5 had negi (green onions) which I had not seen on this dish before. The sauce was a bit runny, but the flavour was good. 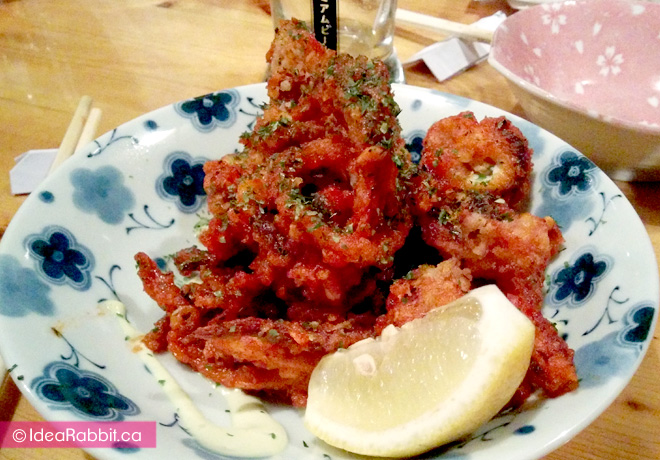 Spicy Calamari $6.30 This wasn’t too crunchy, and there were too much guck. Agedashi Tofu $5.50 was unusual in that it was drowning in soup. So the tofu were soggy, not with the crispy outside that I had become accustomed to. It was more like tofu soup. I wouldn’t order it again, though that doesn’t mean I wouldn’t eat it.

Overall assessment? The noise is the number one thing for me. I just don’t like all the shouting, and also having to talk with others at the table by raising my voice, or not really hearing what others were saying. The food was mediocre. Pricey for the quality. It could be because I don’t drink (at all) that I’m not a fan of the izakaya style – though I wouldn’t say that I don’t like izakaya food. For Guu though, despite the popularity, I would personally not return.