I was kindly invited by Yvonne, the Managing Director of Hakkasan Bistro for a Media Event of complimentary dinner at Hakkasan and wine tasting/tour at Canada Berries Winery (formerly Sanduz Estate Winery).

Hakkasan, a modern Chinese eatery in East Richmond’s industrial area was established in 2007. It was definitely located in an area where you wouldn’t expect a restaurant. They underwent a nine-month restaurant makeover in 2013 and relaunched as the restaurant it is today. Hakkasan serves quality authentic Cantonese dishes with a new diverse menu selection, including Hakka inspired soul food, in addition to our tasting menus. 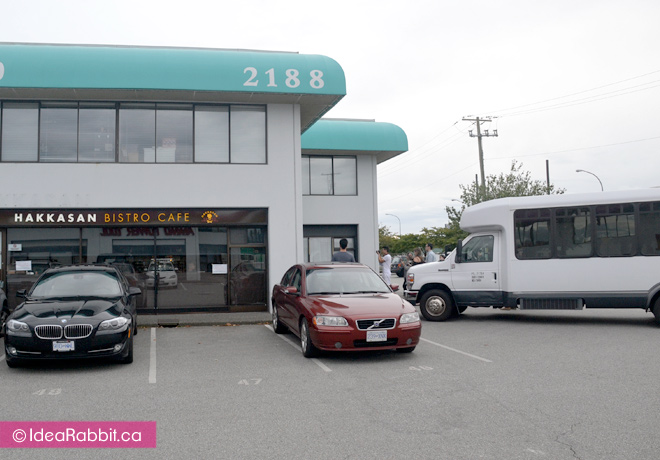 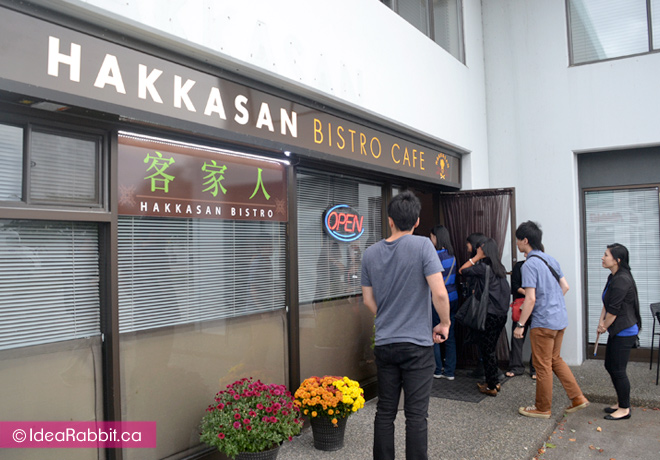 Hakka were Han Chinese people originating from Southern China, known as China’s gypsies and nomads. Their cuisine is not well known outside of the Hakka home. It concentrates on the texture of food, the hallmark of Hakka cuisine.

Texture plays an important role in their cuisine and the skill in Hakka cuisine lies in the ability to cook meat thoroughly without hardening it, and to naturally bring out the rich flavours. Hakkasan’s decision not to re-make the original Hakka cuisine came about, simply because the Hakka’s nomadic lifestyle called for ‘‘peasant’s food’, which were more meaty, hearty and fatty foods – often very sweet or very salty. With today’s society being more health-conscious than ever, Hakkasan decided to evolve with the modern age. 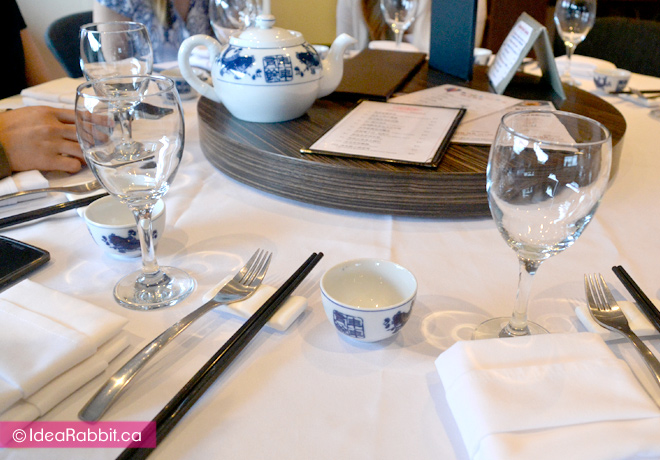 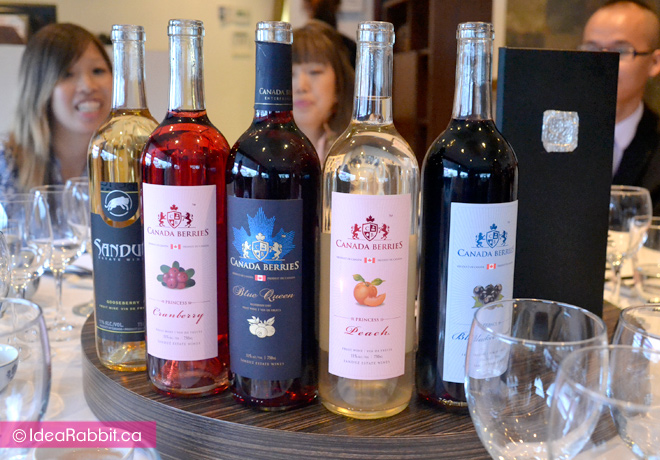 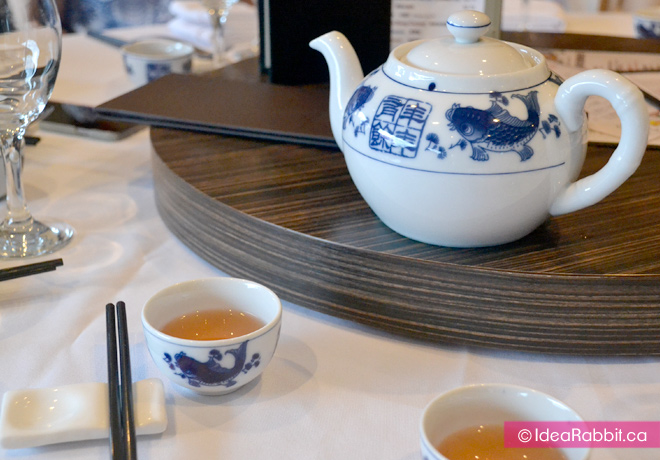 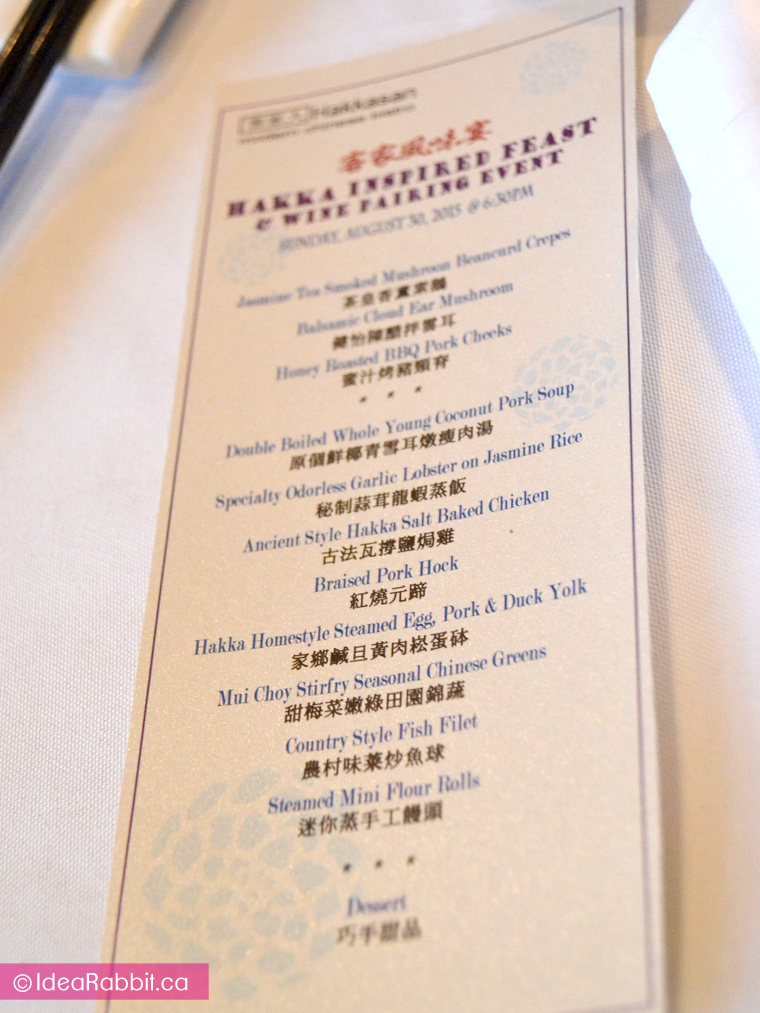 Beautifully printed special menu for the event on pearl stock 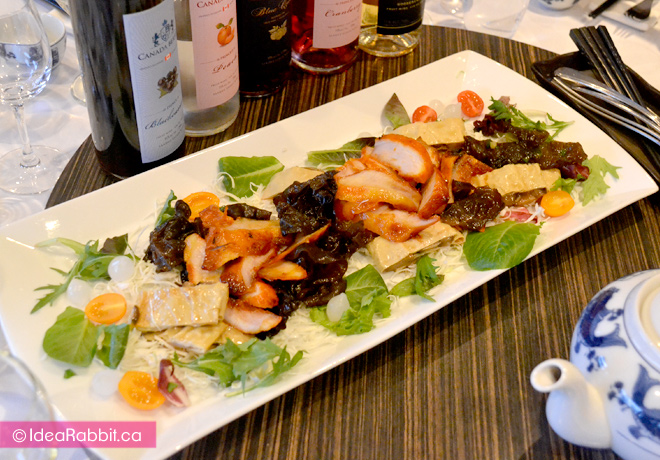 The dinner started off with 3 items on one large plate: the Honey Roasted BBQ Pork Cheeks (Jowls) marinated with their Chef’s special glaze and then roasted, Balsamic Cloud Ear Mushroom and Jasmine Tea Smoked Mushroom Beancurd Crepes. It was nicely presented. 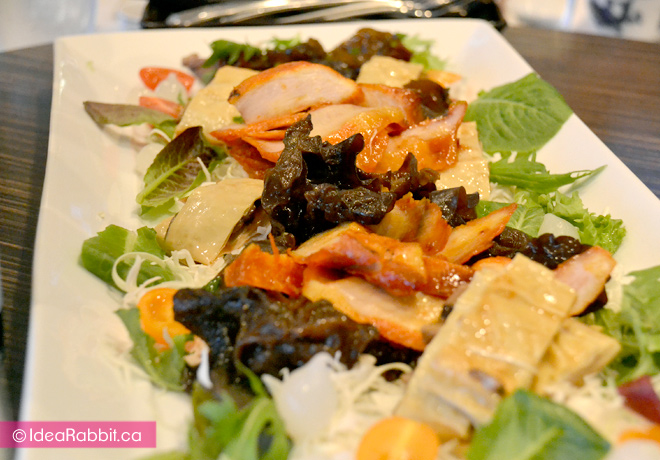 Like most of the dishes served tonight, this dish must be ordered in advance. I found the BBQ pork to be on the chewy side. For having a tooth extracted a few days before, I had a bit of difficult time chewing, but for Sheepie, it was fine. I really liked the Beancurd with mushrooms. Interesting mix of texture and good flavoured sauce. The ear mushrooms were new to me, and although I avoided at first since I’m not a fan of brown-coloured mushrooms, I thought this would be a good opportunity to try it. To my surprise, it was actually pretty good. 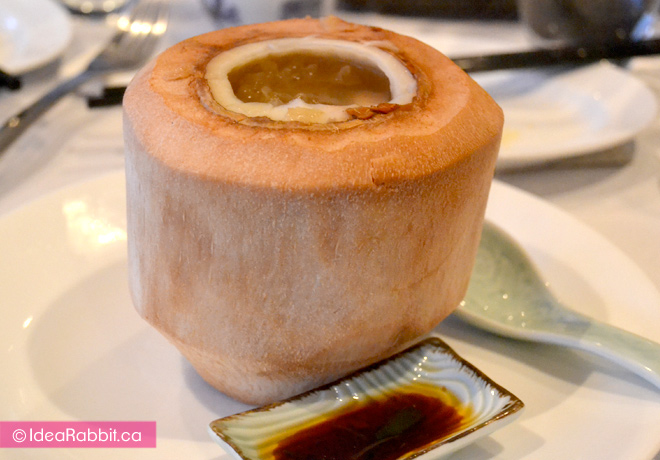 Next off had everyone ‘wowing’ with awe as we were served the Double Boiled Pork with Snow Fungus Soup in Young Coconut. This was quite exciting, as I have never had soup inside a coconut shell! The coconut is hollowed out, lightly roasted then filled with pork and snow fungus which were steamed for over three hours! Yes, because it is time consuming, this dish must also be ordered one day in advance. The aroma is pleasant, the sweet soothing smell of coconut. The taste also had a hint of sweetness that was quite unique and a new encounter for my taste buds. The content inside could be eaten with the broth, or dipped into the sauce served on the side which was salty, giving you the option of switching back and forth from sweet to sour. There were still some of the coconut inside that you could scrape off and enjoy with the broth. I almost felt like a kid, giggling with excitement with this new dish that was new and different. 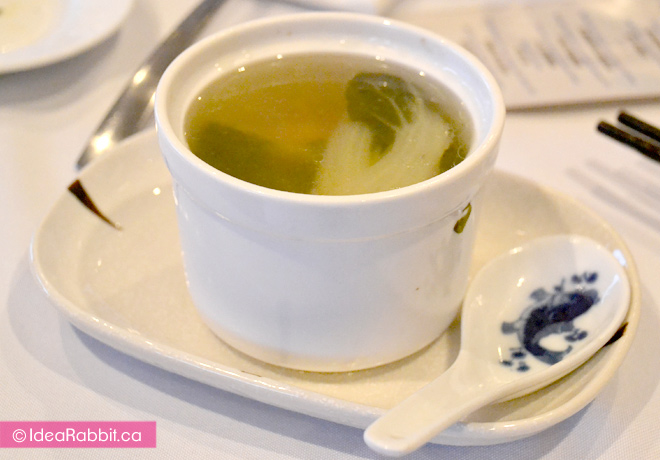 With one of my last minute guest, there wasn’t enough time to make this special soup, so Sheepie got the Chef’s Daily Featured Double Boiled Soup. I had the opportunity to try some, and the broth was super rich and flavourable. Don’t let the simple look (especially to the Coconut soup) deceive you. Both soups were amazing. I have never been this surprised by soups alone! A big thumbs up for both. 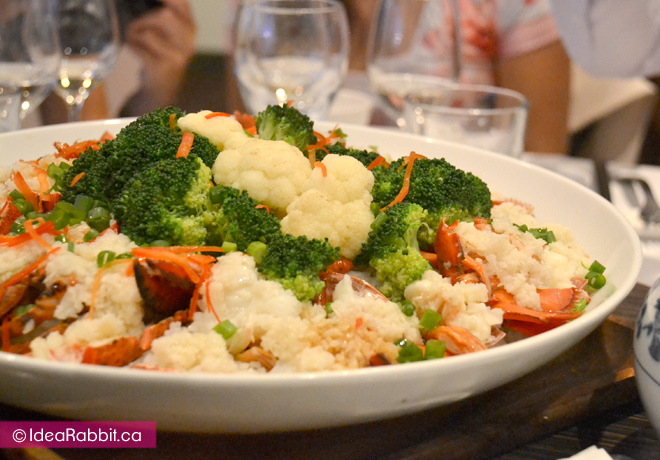 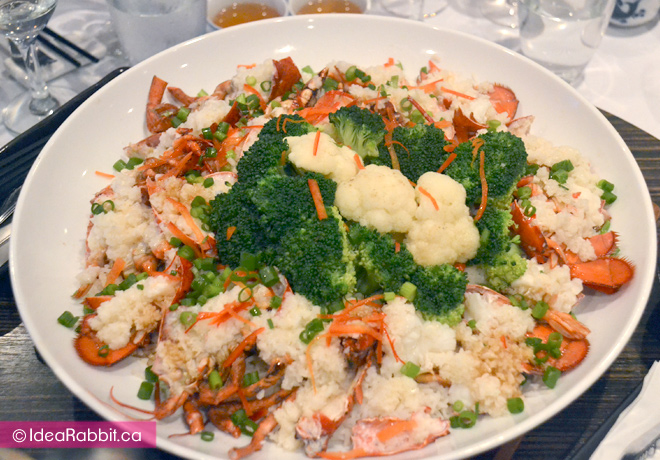 1/2 Lobster, Chef’s Secret Garlic on Jasmine Rice
The gasps from the diners didn’t end yet. If you love lobsters, this dish is for you. There is half a lobster with plenty of meat to pick from. The red lobster is a nice complement to the green brocolli, making it visually pleasant, even before tasting it. As soon as you start eating it, you notice the strong garlic taste. But it’s no ordinary garlic dish. They have specially processed it so that only the flavour remains, and the garlic breath and after-taste is gone! Amazing! Sheepie said it needed more salt, but then again, he’s the one who always sprinkle more salt on his dishes. I tend to avoid sodium, so this was just so perfect. The lobster meat was a bit tricky to get out, but it was very juicey and plump. Very fresh and delicious. 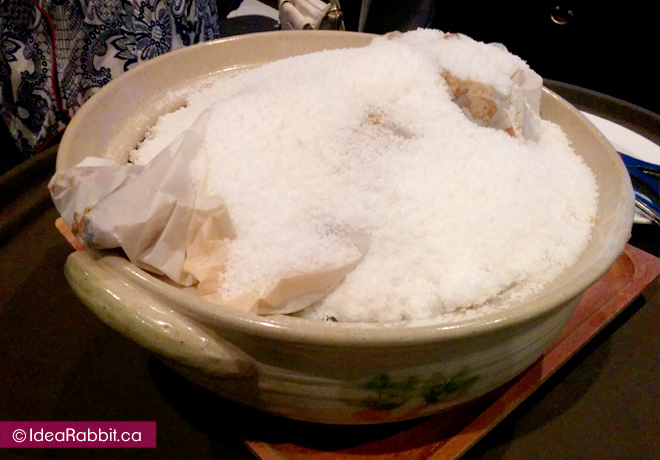 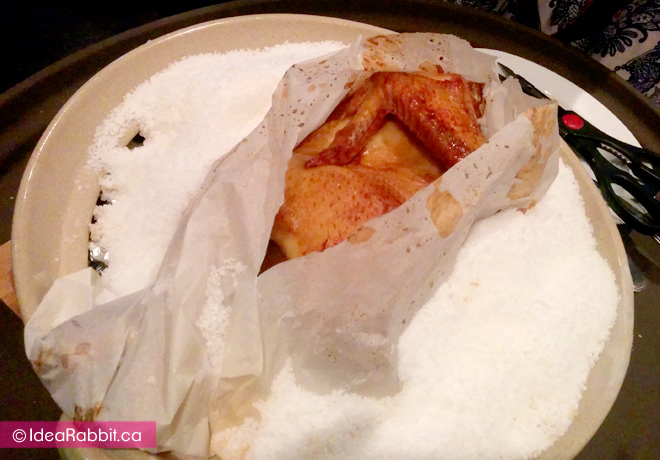 Ancient Style Hakka Salt Baked Chicken
Another round of wows came from the crowd as a big pot with a mountain of salt arrived. The marinated free range chicken wrapped in parchment paper is buried beneath all that salt. Slowly baked, this special dish again needs to be ordered one day in advance. 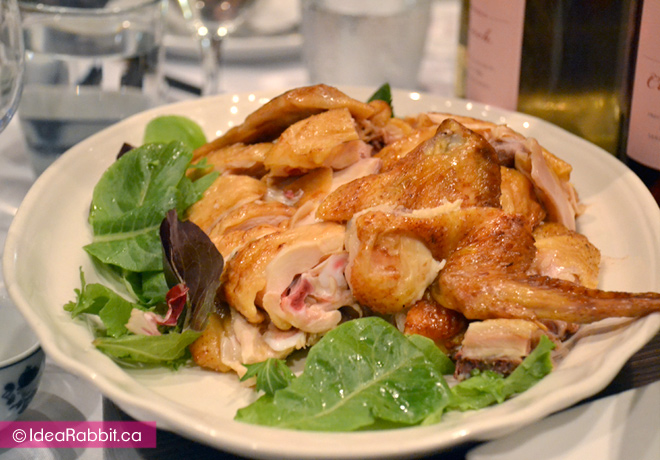 The chicken was tender, and even though there was a lot of salt, the meat itself was not salty at all. It was just perfect. 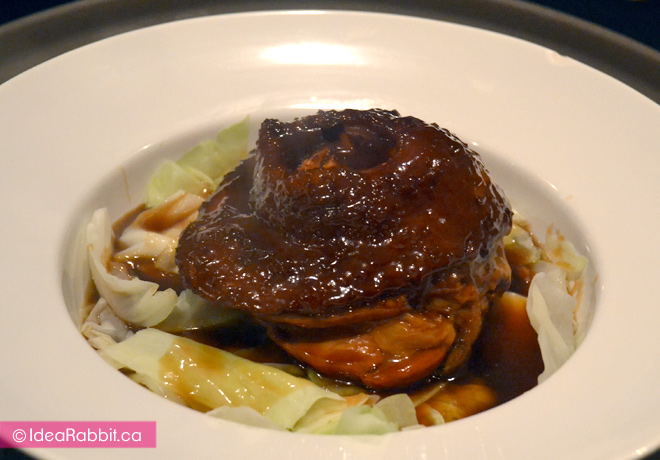 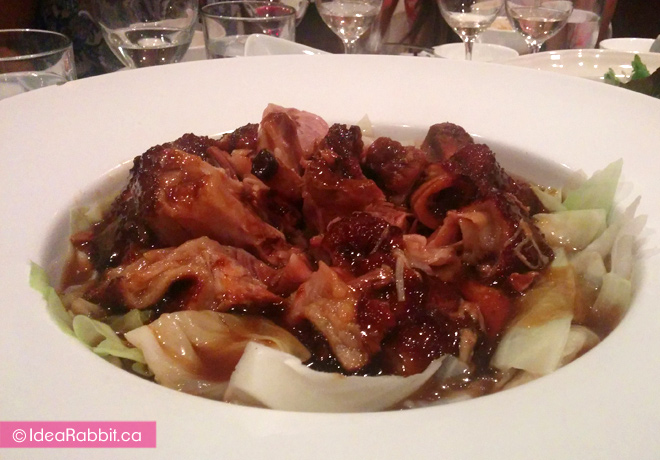 Braised Pork Hock
This specialty item must be ordered one day in advance. The meat just melts in your mouth with no effort. The thick sauce went well with the garlic rice from the Lobster. It reminded me of German pork chops. Extremely well done. 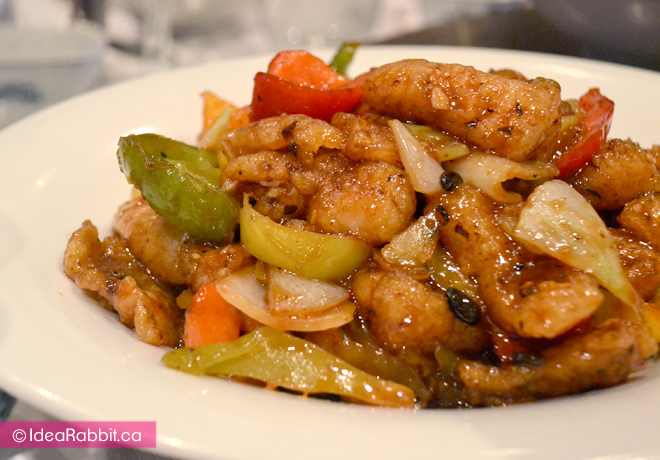 Country Style Fish Fillet
This ended up being both of my guests favourite dinner dish. The punch in flavour balanced out with the more bland Jasmine rice from the lobster. I on the other did enjoy the flavour, but I’m usually not into dishes with thick sauces and deep-fried. I wanted to take out the fish from the batter, but still, the flavour was strong, and the still crisp veggies complimented the fish. 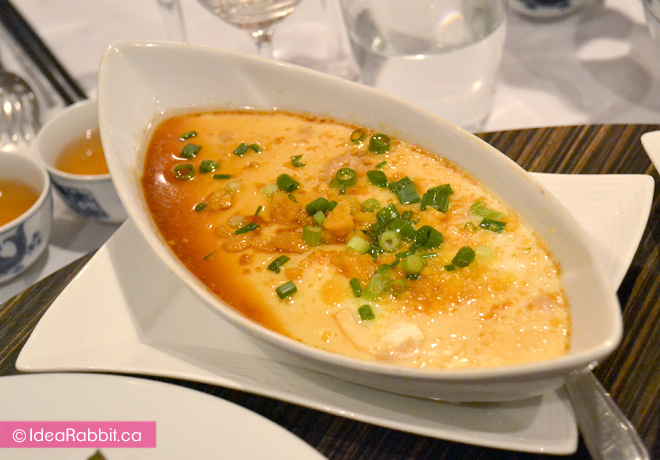 Hakka Homestyle Steamed Egg, Pork and Duck Yolk
Wow, this was so soft and smooth! A bit hard to eat with chopsticks, especially when you wanted to eat so much of it since it was so delicious! Amazing technique to keep it soft without any crust or hardening. Went really well with the ground meat inside. I would have liked more, but there were so many other dishes that I didn’t get to scoop out more. 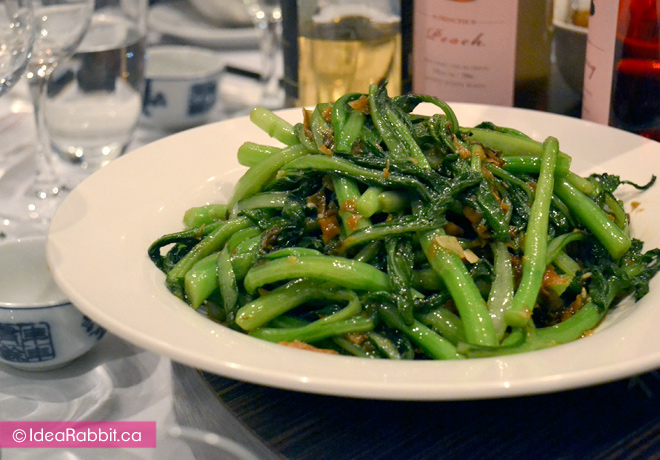 Mui Choy Stirfry Seasonal Chinese Greens
No Chinese meal can be without some greens. Fresh greens, not soggy nor too salty. Unfortunately, by this time, I was getting pretty full that I didn’t get a chance to eat much of it. 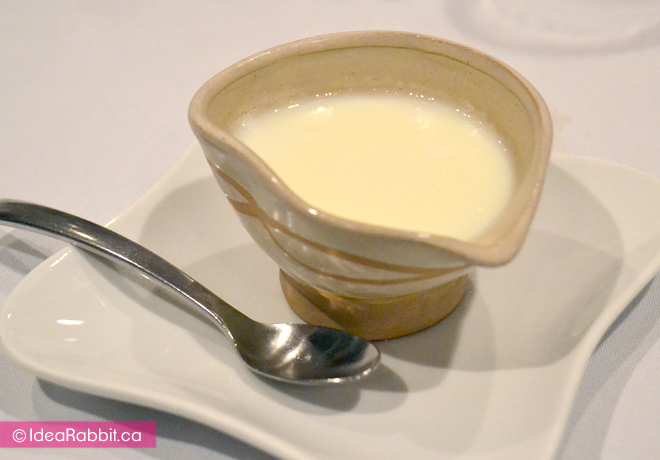 Steamed Milk Egg White Custard
Last but not least, the dessert. It was quite simple, but made soft and silky. One of my guest loved it so much she went on to tell Yvonne “I’d come all the way out just for this dessert. I mean, the other dishes were great too of course!” I prefer more gelatin, or firmer – doesn’t have to be hard as jello, but like Annin tofu (杏仁豆腐). Form wise, it was a bit too runny for me, but the taste wasn’t overly sweet and easily went down to my happy stomach.

Unlike some Chinese restaurants, the dishes were not overly salty or greasy. It was light, easy to eat and high in quality. This is higher-end restaurant with quality food, considered food presentation and service. The service was excellent! You wont find staff clanking and throwing the dishes down or rude customer service that had me stay away from some Chinese restaurants. The staff at Hakkasan do make a huge effort to make your dining experience superb.

Keep in mind that they didn’t close down the restaurant to the public, so they still had to keep up with the demands from the customers who came to dine. That was pretty impressive as the media group took up 4 large tables with lots to eat!

Most of the dishes were ones that I had never tried, and likely would have never tried, unless a friend who was familiar with the cuisine took me there. They were exciting, delicious and opened up a new door to the world of cuisine. I would like to thank Yvonne for her kindness in inviting me and my guests to this media event. Great big applause for the staff of Hakkasan. It is no wonder that Hakkasan has won, The Chinese Restaurant Awards – Diner’s Choice Award twice, once in 2011 and again in 2015 for Best Service.

Although I don’t drink, so I was unable to try out the fruit wines that were offered, I greatly appreciate the wine tour that took place before the dinner. One of my guest really liked the wine during the dinner, especially the peach one.

Find out more on Hakka Bistro:

*My reviews are my opinion and all photos for this post were taken by me, and has not been edited, altered or paid for.