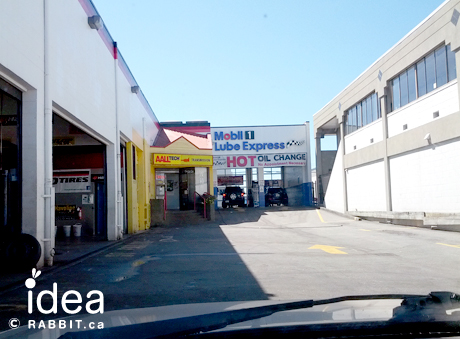 So a friend of mine gave me a voucher – $19 for premium oil change and 25 point inspection (a $78 value). It’s a long No.3 road in Richmond, right across from Landsdowne Station. With a very small entrance, it’s easy to miss. I’m glad that I had familiarized myself with Google street view to see what was around it so I knew what the area would look like. Also, there was a guy waving a sign to the oncoming traffic. Wah…must be hot with the summer sun blazing down onto him…

The guy who greeted me was friendly, he told me to park behind a vehicle that was being serviced and said that it would be about a 15 minute wait. I was already happy to come to Mobil instead of Autobot – another voucher for oil change that I had bought. The one guy was friendly, and no appointment was necessary. Last year with Autobot, I needed to drop it off and take the skytrain home, and do the same to come pick up. This year, when I called in to make an appointment, they said that since I was only able to come in on Saturday, my appointment would be 4 weeks away! With Mobil 1 Lube Express, it was serviced right away, and could drive off with a repaired car. How convenient!

The guy doing my service was really hard to understand. He had a higher voice, and talked fast – perhaps unclear. I was also nervous because when it came to cars, I didn’t know much. I know how to check my oil level, fill it up, add coolants and fill gas, but that was about it. I stumbled whenever a question was asked about the car.

As he inspected, the bill grew bigger and bigger. I needed to replace my transmission, flush out my oil, this and that, coming to a total of $210. Because I don’t know much about cars, I can’t say if I’m being scammed or something. But the staff did show me the parts and explained why it needed changing or renewing. But most auto repair places have been good. And when 2 places tell you the same thing (not like you need to change your oil, or something generic), but the same specific problems, then you know you have a problem that needs fixing.

I drive my car to work and back 5 days a week, so I figured $210 was reasonable, and it’s just good to know that the car is in good working condition, especially since the car was already 16 years old, and for the first decade, it was never routinely checked or serviced.

Perhaps the guy could sense my unwillingness to pay $210…he suggested that I keep the receipt with all the details on what was done to the car, so that if I do bring the car back, or take it elsewhere and they say that I need another transmission change, I can prove to them that it was already done recently.

Because I had a bit more replacing and cleaning to do, it took longer than other people, but still around 30-40 minutes. Not bad. I rather wait for that amount of time than be without the use of a car.

Unfortunately, I can’t return the Autobot voucher…but it will be the last time, since now that I know about Mobil, I’m certainly going back again to Mobil