Thanks for coming to check me out!

The character of ‘idea rabbit’ began as an illustration class project in 2007. The assignment was to do a comic strip. I got hooked into the cute, adorable characters that are popular in Japan when I lived there briefly and wanted to incorporate it into the project. I came up with a cute rabbit character and short story for my class project and it was well-received. The name ‘idea‘ was given since the program at the school was called I.D.E.A. (Illustration and Design: Elements and Applications) and the story of the comic-strip was about the day and life of an IDEA student, or rather idea rabbit. Since then, the name kinda stuck and thought I would use it as a mascot for this blog about creative ideas, inspirations and creations.

However, blogging only about design and art became limiting, so I expanded to anything that I thought was well worth blogging about. Living in a city like Vancouver (BC, Canada), it’s no surprise that many of the posts are on restaurants and cafes. Once I started going out to try different restaurants, I got hooked and it became a regular thing.

I do not get paid to review the restaurants or products. The restaurants do not know who I am so I come as a regular customer. I am in no way a professional writer or a food critique. They are all my personal opinions. I try my best to write factual information as correctly to my best of knowledge. If you see any errors, please let me know!

I have been invited to try out the restaurant/cafe a few times, but I always indicate in the post that that is the case. However, I do not get paid for it nor are the reviews edited by outside parties in any way.

If you have any comments, questions, or suggestions, email me at hello@idearabbit.ca 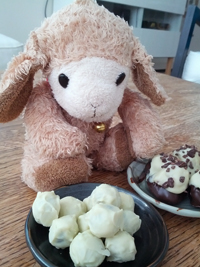 Intro of Sheepie
Sheepie doesn’t contribute to the blog, though I sometimes ‘borrow’ – eh hem his photos, but I RARELY do that. Of course he contributes his brief opinions of whether he liked the restaurant or food, but that’s about it. He is however an IT expert, so he’s the go-to guy for any problems with the blog. Sheepie comes from Germany with a bit of temper

In spring of 2013, he became really interested in making chocolate himself, and became a hard-core hobby-chocolatier, even starting up a Chocolate club. Everyone around has told him to start his own shop, but he says that will take the joy out of making it.