I and my friend went to Calgary for the long weekend, and she invited me to her family’s dim sum. Located on the second floor in a two-storey building in downtown, they said it opened less than an year ago. There aren’t any free parking (like in Vancouver) and prices are outrageously high. For the first hour, it’s $4, and any additional is $4.25. 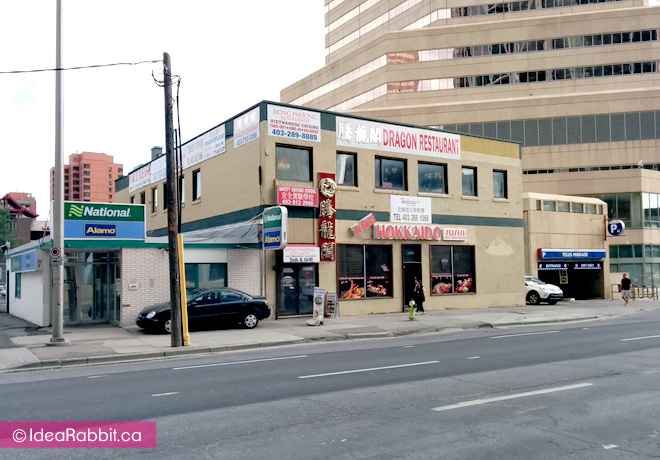 It was around 11am on a Friday, so it was pretty empty. (though after reading some reviews, it seems it might always be like that…could be the expensive parking). From the outside it doesn’t look like much, but inside, it was nicely decorated, and fairly clean.

Since our family was invited to my friend’s family/relative’s dim sum, I didn’t get a chance to take photos of the food as I thought it was inappropriate of taking photos of what seemed to be around 20 dishes for 10 of us. We left most of the ordering up to them, which was good since they knew more about dim sum than us.

Some of the dishes that were ordered:
Seafood Congee (was very good – I think my mom really liked it)
many different types of dumplings
Steamed Pork Dumpling (Siu Mai)
Shrimp Dumpling (Ha Gao)
Eggplant stuffed with Shrimp Mousse
xiaolongbao (didn’t have the ‘juice’ that usually explodes which was a bit of disappointment)
vegetable noodle
Shanghai noodle
Deep Fried Taro Dumpling
BBQ Pork Rice Roll
Scallop and Shrimp Dumpling was beautifully presented. Looked like a jewel.
Shrimp Rice Roll
any many more!

We were all stuffed with lots of leftovers to take home. Despite having 10 of us, two were young kids who were more interested in playing games on their phones than eating, so hence the leftovers. The food wasn’t too salty or didn’t seem to be loaded with MSG and was served hot.

Overall, the service was good, the food was very tasty. I can’t really comment on how much it cost as our family was treated, but do recall seeing the noodles were $12.95 which is a bit higher than some of the other dim sum I’ve been to, especially since they were both without meat. I would like to come back again if I’m in Calgary in the future, though cost of parking is a problem. It would be best to carpool or take transit – which isn’t that great compared to Vancouver’s.