I was pretty excited for my first Foodie Mashup with LazyMeal! It was at Chef’s Kebab in Surrey. I was going right after work at 5pm for the 7pm event. However, due to the event’s time change at the last minute to 6pm, I wasn’t sure if I was going to make it on time, driving during peak hours from Brentwood area. Sure enough, I was going 30km/hour on the Trans Canada Highway on a rainy, miserable evening, driving through an area that I wasn’t familiar with. I knew I wasn’t going to make it on time.

I left the office 5 minutes early, still, it took me 1 hour and 20 minutes to get to the restaurant in which I had already missed 3 appetizers. Oh well, better late than missing the entire thing! And I was super stoked in going to the Mashup event.

I got a chance to meet with two guru food bloggers – Jenny of My Secret Eden and Mary of Mary in Vancity. I’m still new to this food blogging, so it was great to finally meet some ‘veterans’ and hear their stories of how they got into blogging.

Many noted that they were unaware that this place existed – even for those that lived in Surrey. It was located in the middle of a neighbourhood of car dealers, so no one thought that an restaurant was in operation. There were some parking out front which is always a plus. There were flashing lights near the entrance (luckily outside) to attract customers. Even though many didn’t know about the place, the restaurant was pretty packed and lively. 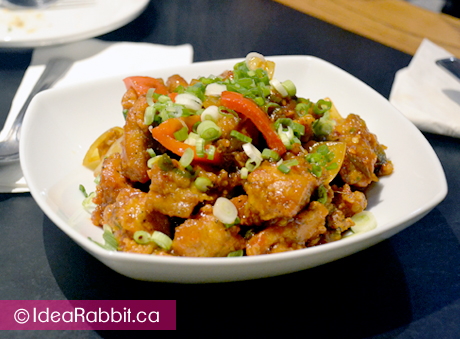 The very first appetizer I got to try was the Chilly Chicken $8.99. It was very tender chicken tossed in spicy Szechwan with green onions and red pepper. The meat was juicy and soft. Very delicious! Everyone mentioned that it was more like Chinese dish, but that’s probably because of the use of Szechwan spices which are used in Chinese cuisine. It was interesting to see it served at an Indian restaurant. 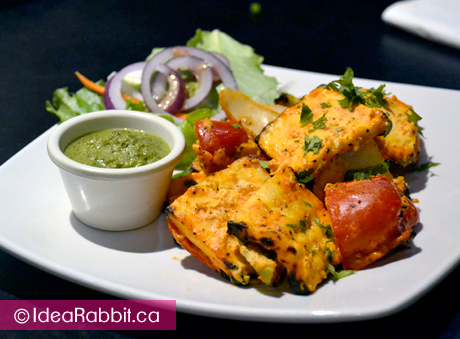 Sarsoon Panner Tikka $9.99 was something new that I haven’t tried before. It was farmer cheese marinated in yogurt and flavoured in mustard. Again, very soft, rich in flavour. Super delicious! 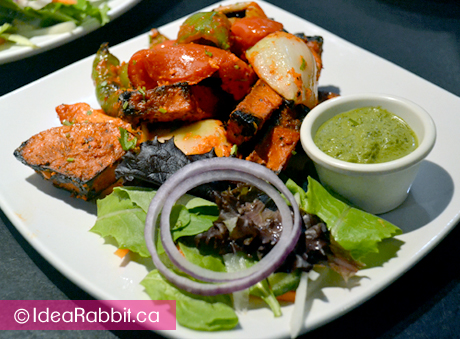 Jackfruit Kebab $8.99. This was probably the most surprising dish. I had never tried this either, and at first, I thought it was chicken. When the other bloggers mentioned that it wasn’t and that it was actually a fruit -hence the name of the dish. At first, I was a bit confused, but I took a closer look and indeed it was a fruit! It was marinated in yogurt, grilled with dried pomegranate seeds and rich flavours. It had a nice hint of charcoal taste, and the cilantro added to the flavour that spread in your mouth. I really liked this dish!  It was interesting and delicious. A must try!

I’m not sure if it was because there was a huge table of like 20 taking up half the restaurant that the servers were busy, or the fact that we were there as a Mashup that they didn’t come to fill our cups with water. I didn’t have utensils at the beginning since I was late, but no server came by or noticed that I didn’t have any – so I had to go up to the front to ask for one. I also didn’t have a glass of water, so by the time I had 3 dishes, I was thirsty for some water, and had to go up again to request a glass of water. One server never seem to smile, and seemed a bit cold. The other girl was much more friendlier and warm. 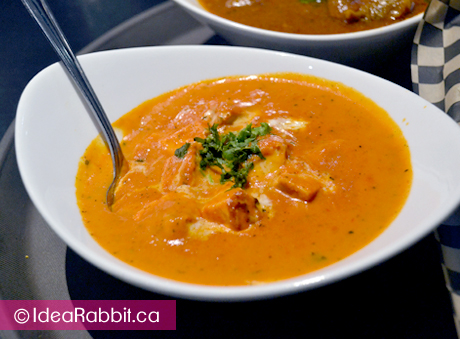 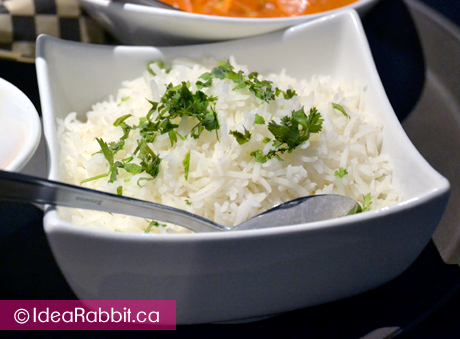 Butter Chicken $9.99 was rich in flavour, nothing like any butter chicken I’ve had before. It had a richness to it that the usual fast food Indian take out places, or All-You-Can-Eat places didn’t have. It went really well with the fluffy white rice $2.50 and naan $1.25 (4 pieces). Butter chicken curry has always been my favourite, but this one is two thumbs up! 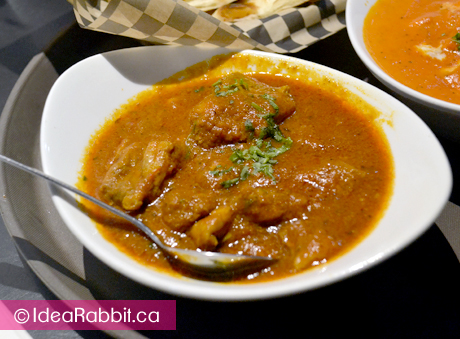 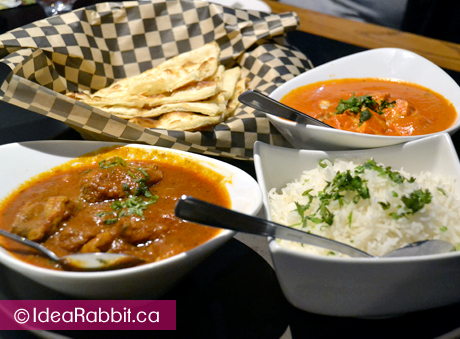 The Lamb Curry $11.99 was good too. Others really liked it, and they kept praising it, but I mostly ate the butter chicken instead, only because I’m not so much of a lamb fan. That’s just my preference. 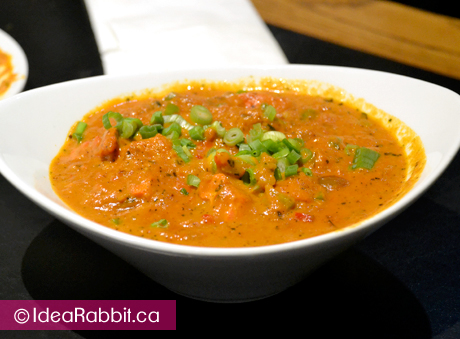 Next up, we had the Chicken Tikka Masala $10.99. The chicken just melts in your mouth! Mmmmmm! So good! 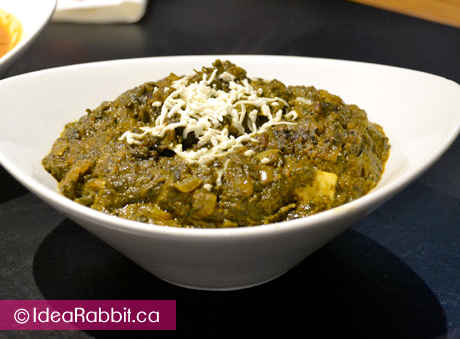 The Palak Panner $9.99 was different with farmer’s cheese cooked in garlic and cumin spinach puree. It tasted on the healthier side with the spinach. Both the Masala and Palak went very with rice! 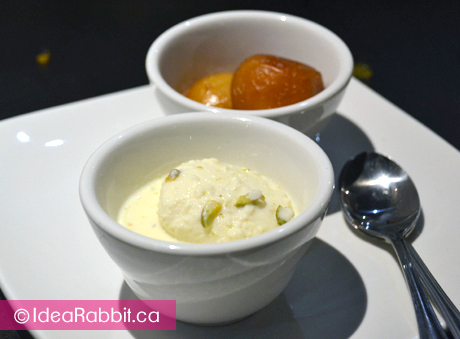 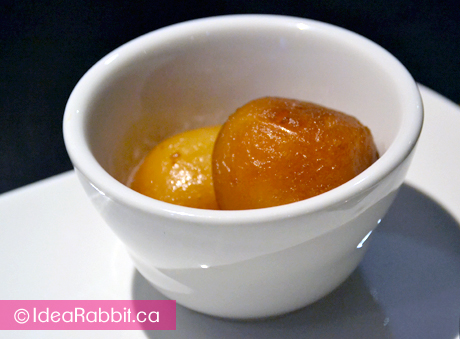 For dessert, we had the Gulab Jamun $2.99 which are a cheese-based, made mainly from milk solids, kneaded into a dough and then shaped into small balls that are deep fried. The balls are then soaked in a sugar syrup. Jenny mentioned that it was a soggy donut. I agree. The sogginess didn’t bother me as much as it did her, but the sweetness was a bit too much. A bite is just enough, so a dessert (with two balls) was plenty to share amongst the 5 of us. 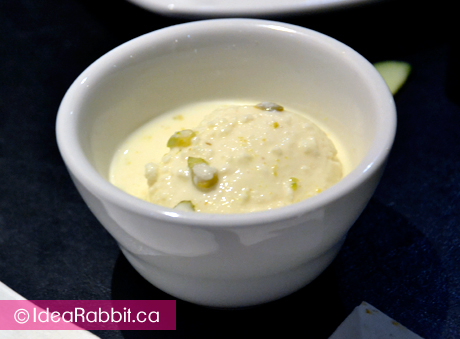 The Ras Malai $3.50 looked like ice cream, but it wasn’t. Other said it was cheese, but it seemed like as Jenny put it “bread soaked in condensed milk.” Sure enough, it didn’t seem like cheese, and again, I had to agree with Jenny’s description. Upon coming home, I did some research and found that the name Ras Malai comes from two parts in Hindi: “Ras” meaning “juicy” and “Malai”, meaning “cream”. It is paneer (cheese) soaked in clotted cream. It was an interesting texture for a cheese. It was spongy and interesting.

That wraps up my first Mashup! The dishes were really good, and the portions were quite filling. It was great seeing the other 2 bloggers and trying out this restaurant. I really enjoyed the new Jackfruit dish and the butter chicken. Since I live far away from here, I don’t think I can come here often, but surely, if I’m in the area, I’d love to come back again!