Sheepie surprised me with this new find in North Vancouver near Lonsdale Quay. A very small restaurant-bar but with character. Our server was very friendly and patient with our questions regarding the Spanish dishes that we were both unfamiliar with.

We started off with complimentary olives, which were firm and tasty, with a hint of spiciness. 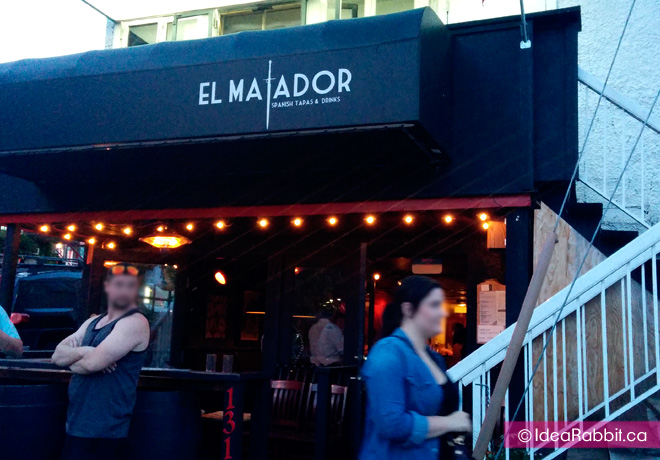 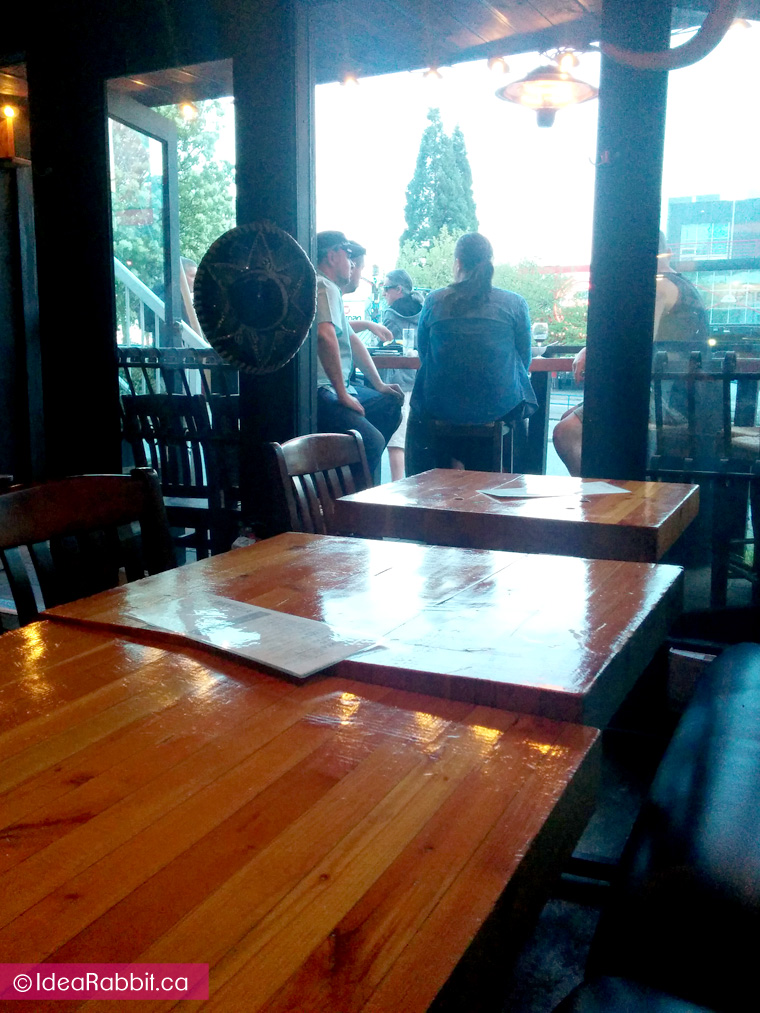 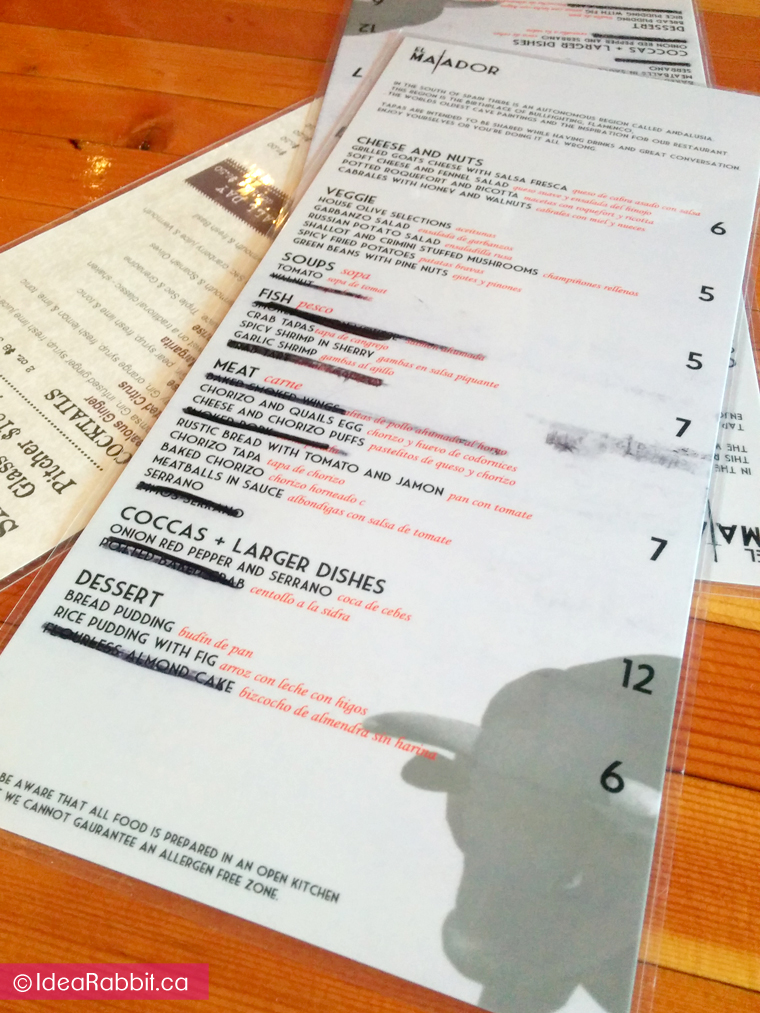 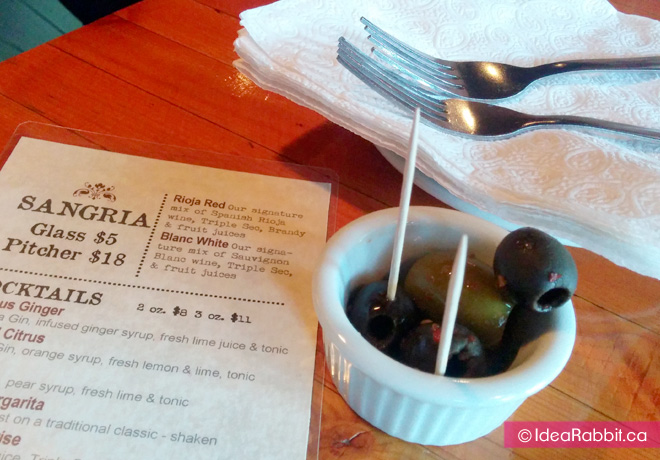 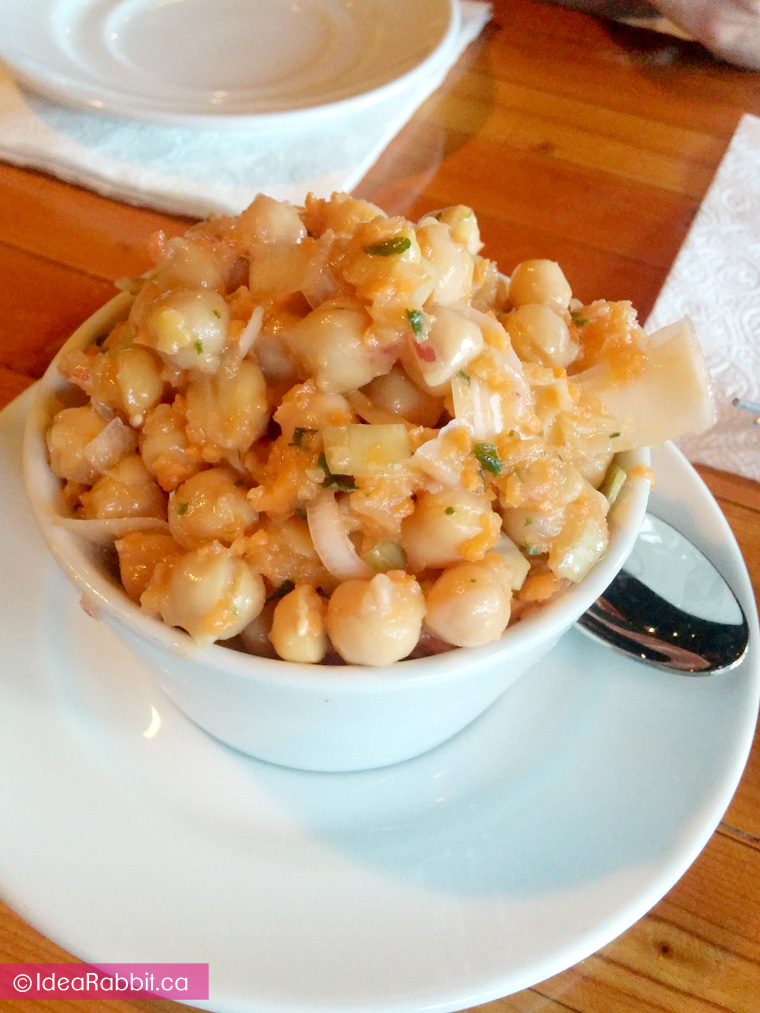 Garbanzo Salad $5 was mostly chick peas and raw onions. The strong bitter taste of the onion took over everything else which made it a bit hard to eat it. Sheepie didn’t like it at all, so I had almost all of it to myself. I would not order this again, even though I like these kinds of dishes. 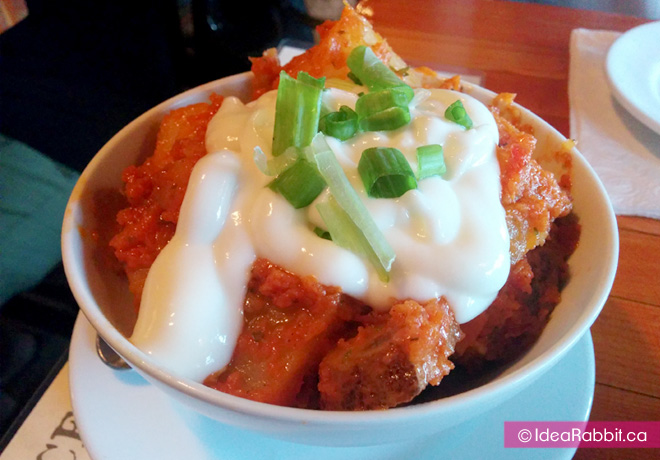 Spicy Fried Potatoes $5. Wedges in spicy sauce, though I didn’t find the sauce to be spicy one bit. The sour cream and green onions on top added to the flavour. 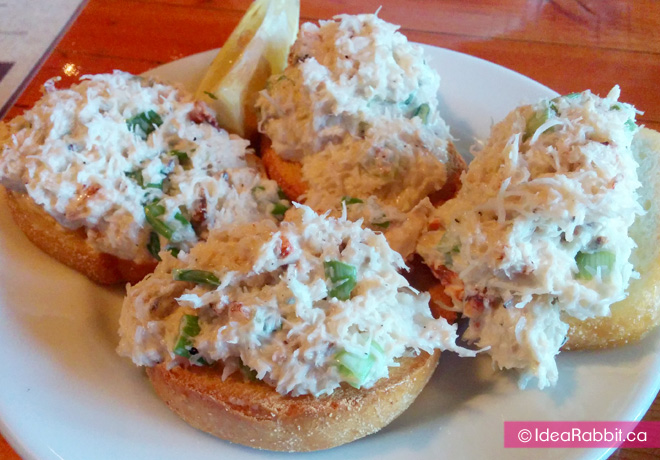 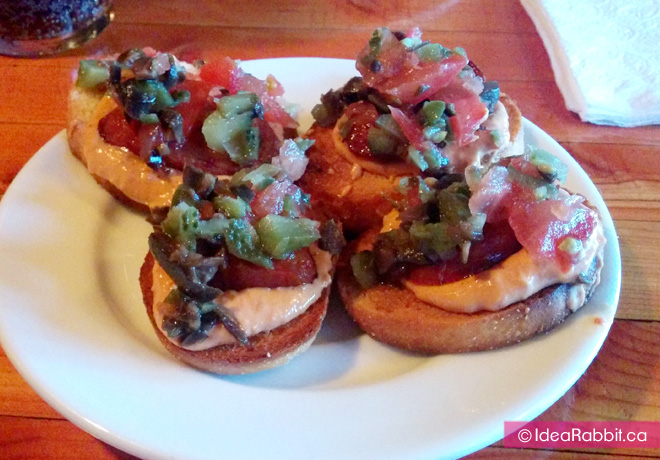 Chorizo Tapa $7 Not much meat, and the flavour was unmemorable. 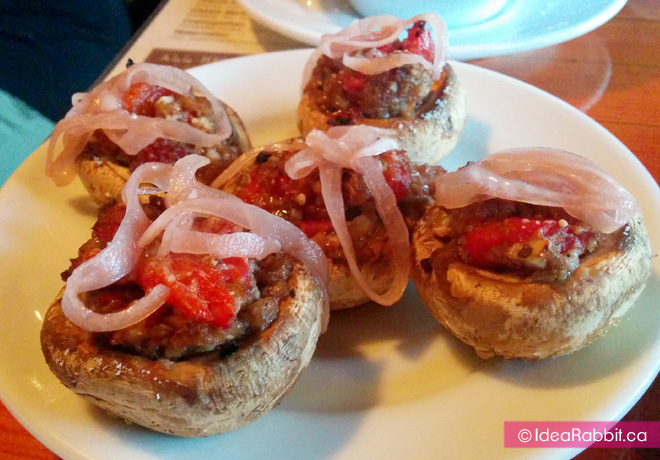 Shallot and Crimini Stuffed Mushrooms $5 Tasty, and the mushrooms not soggy.

Service was very good and we enjoyed the food and atmosphere. Great location near the Lonsdale Quay.

We happened to drive by and thought we’d try out the place. It’s a nice small cozy restaurant with Spanish character. Nice decor and odd ceiling with doors that people seem to point and talk about…not sure what they are for… We sat by the window with candles and a little plant – love the extra detail. However, I wouldn’t want to sit at the table right by the bathroom – it is waaaaay too close. But it was almost full house with one table empty, though by the time we were done, the restaurant was  empty. 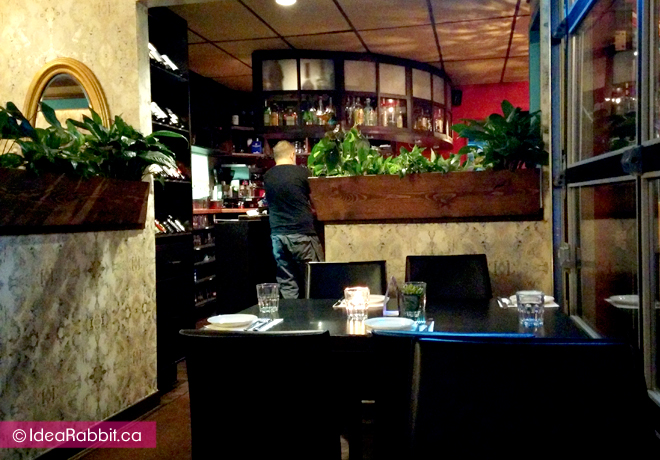 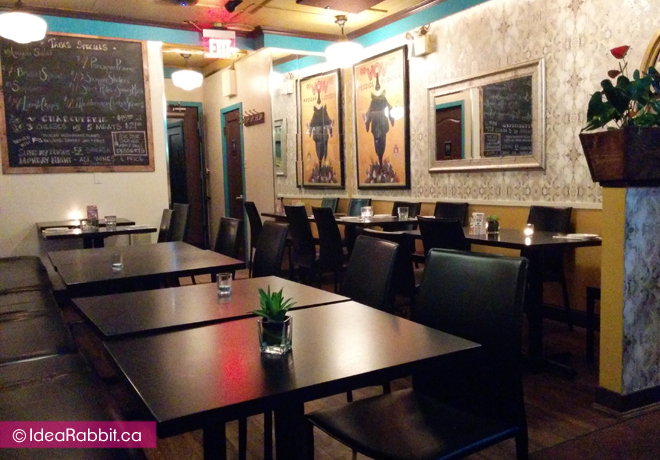 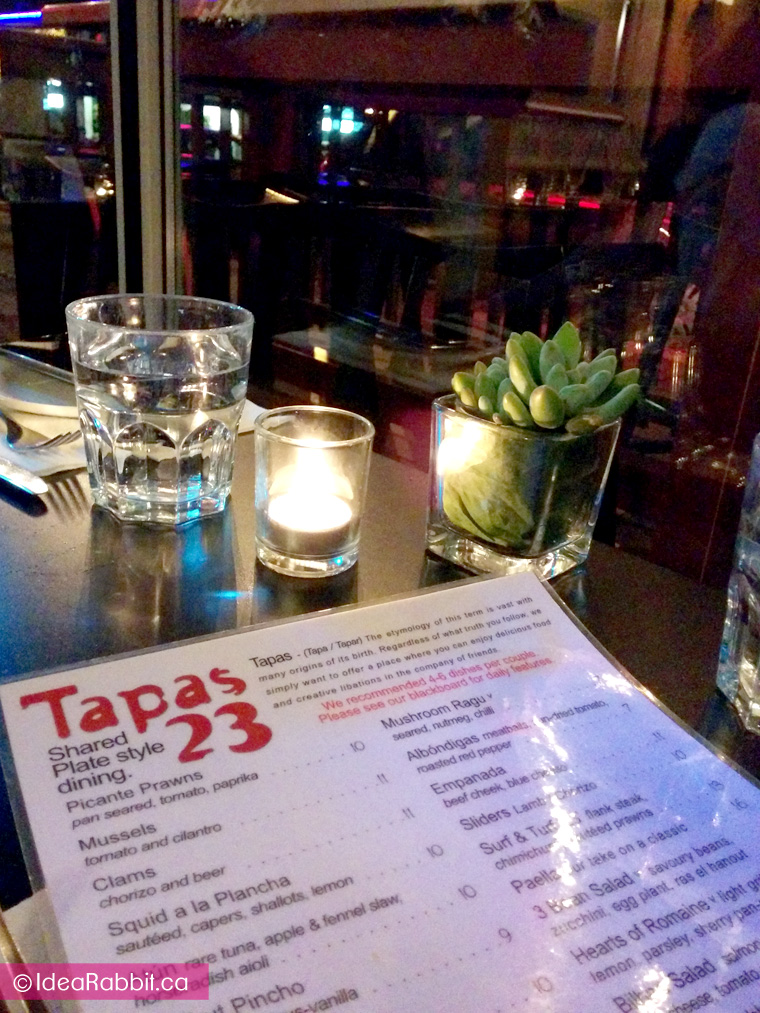 Our server was very slow in telling us the menu, as if we were his first customers. His sentences were so broken up, I lost interest in listening to him go through the entire menu as he read from the blackboard at the back of the restaurant. He was cheerful though. 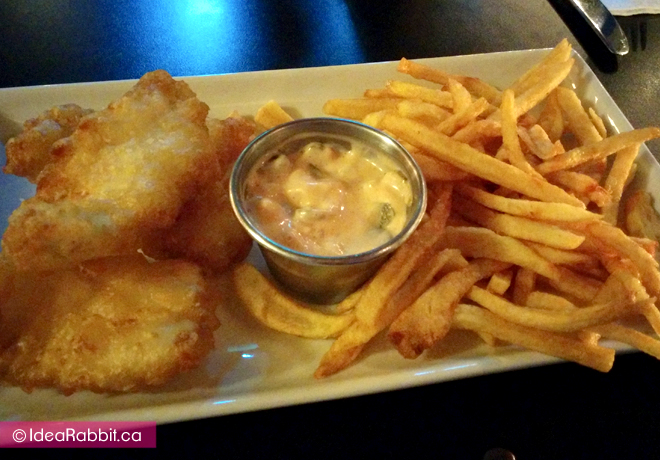 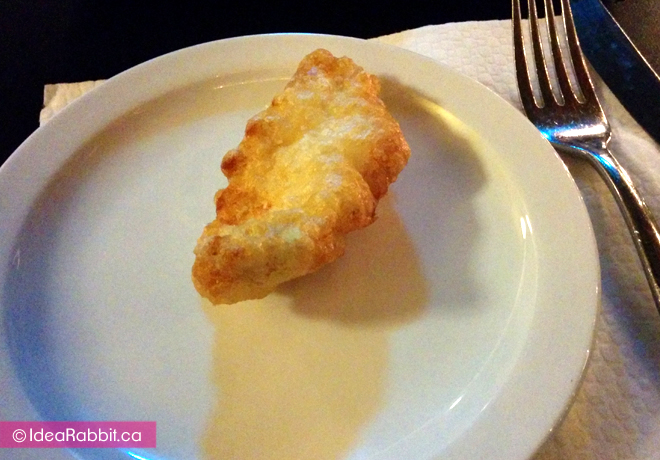 Pescado Fito $10. We were disappointed in the portion and quality. Sheepie was now regretful that we didn’t go to the fresh Fish and Chips place just a few stores down that had it for almost the same price.The fish pieces were small and the fries were like left over McDonald’s french fries. The tartar sauce was good though. Not worth $10. 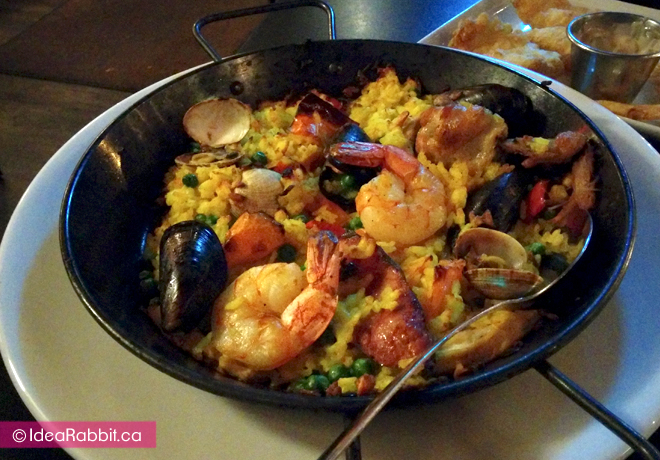 Paella $16 Most of the rice was stuck on the pan, and there weren’t much of it. The portion wasn’t as large as we were told it would be, but there were plenty of seafood.

Overall, we weren’t that wowed with the food. The atmosphere is nice, but the food isn’t worth paying what they were asking…

No plans to return.

I met up with a friend who suggested Espana. When I got there around 6:45pm on a weekday, there were only 3 small tables left available. By 8pm, the place was jam packed and the noise level got a bit too much for the both of us by 9pm. But that was ok, since we were done eating and chatting by then.

It’s a hip/modern tapas place. Cozy and a bit cramped, though I guess that is to help strangers come together and talk, which did happen. 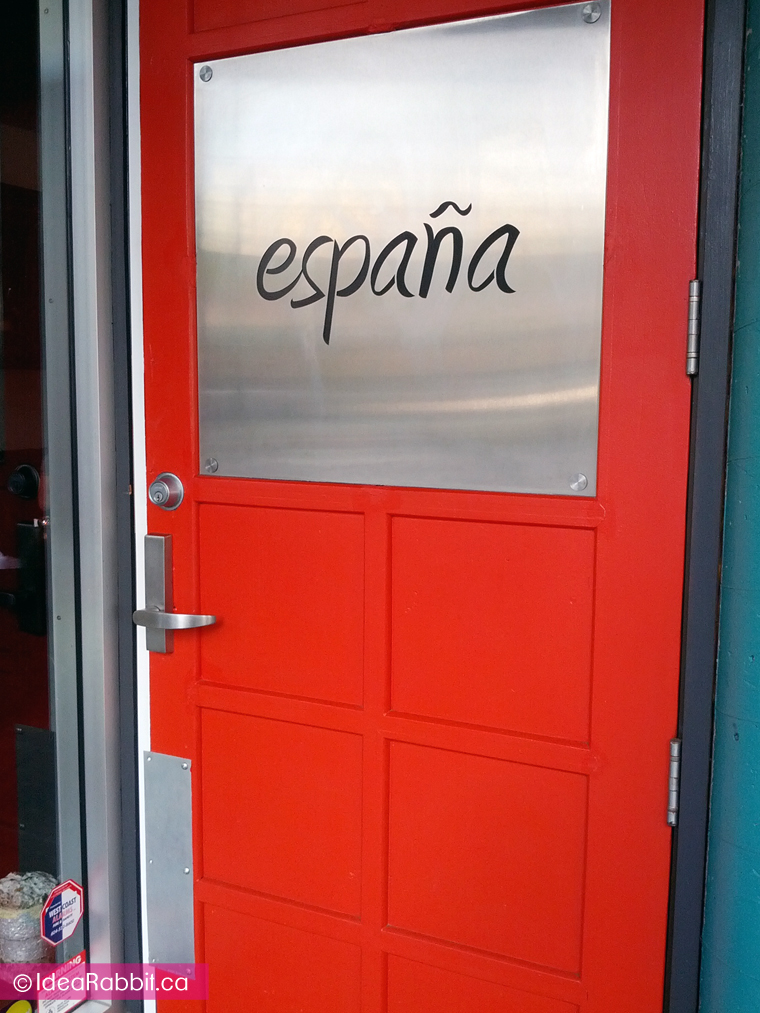 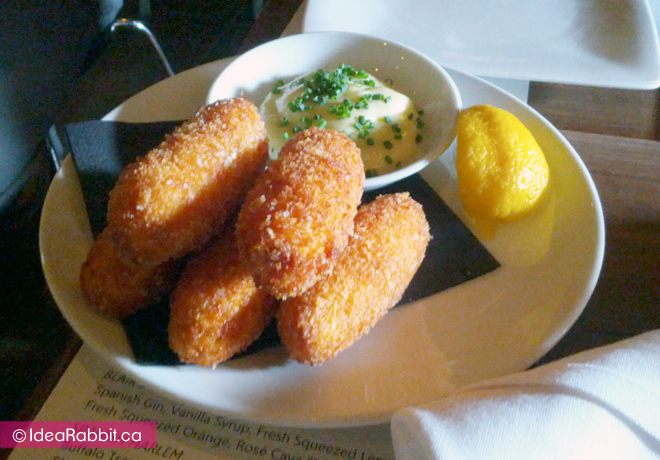 The Cod Croquette was really yummy. Super crispy and hot inside – nicely fried. The cod went well with the potatoes, and the lemon juice gives it a nice zesty punch! The mayo on the side is nice for those who rather not have any like my health conscious friend. I used only a bit. 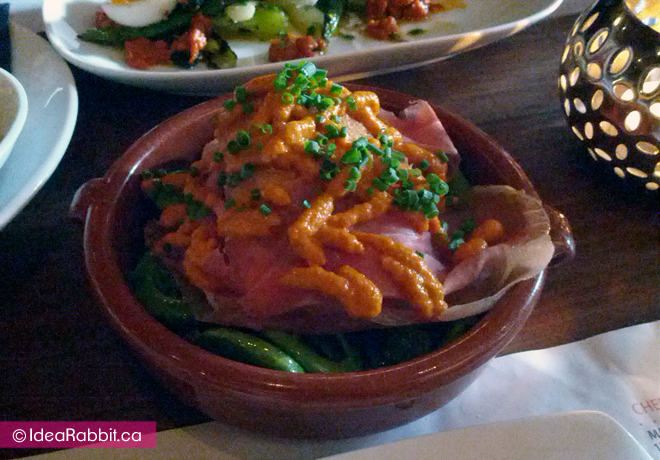 The Fiddlehead was an interesting dish. A new dish added to my menu. I had seen fiddleheads before, but I don’t recall ever trying them. It was bitter, but tasted healthy. It went really well with the thinly sliced ham and oozing yolk of the poached egg. At first, we didn’t know it was an egg because if was breaded and deep fried. I liked it so much, when the neighbouring gentleman asked what I’d recommend, I suggested this dish. 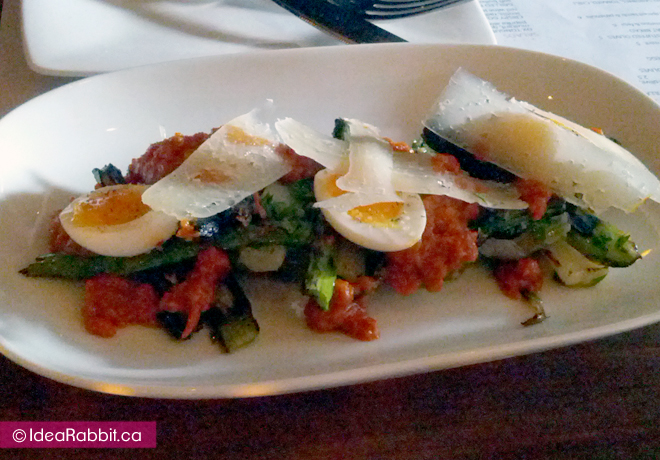 The Asparagus and Leek looked really good, but unfortunately, I was told that this has almonds in the sauce. It doesn’t say on the menu, but after my friend started eating it, she noticed that it had some kind of nuts. We asked our server, and she was right. I tried eating parts that didn’t have any sauce on it. 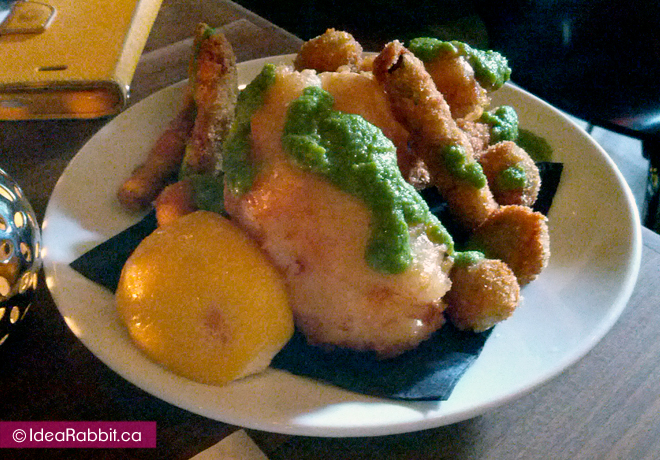 The Frito Mixto was another dish that was all deep fried. My friend wasn’t too happy about this as she is quite health concsious. The dish was quite delicious, though after a while, yes, the deep fry can be a bit heavy. The olives are tasty!

Overall, I was pretty happy with the food and service. Our server was quite pleasant and was concerned about my allergies. I would like to go back to eat the Cod Croquette and Fiddleheads again. Oh, and of course new dishes too!