Perhaps you had seen the lit letters of GESAMT KUNST WERK when you crossed Granville Bridge and wondered what it was all about. Well, the cityline is going to change after this project.

Gesamt Kunst Werk. In German, that means a total work of art. The sale centre is gone now, but I had the opportunity to check it out on the last day before its closure. 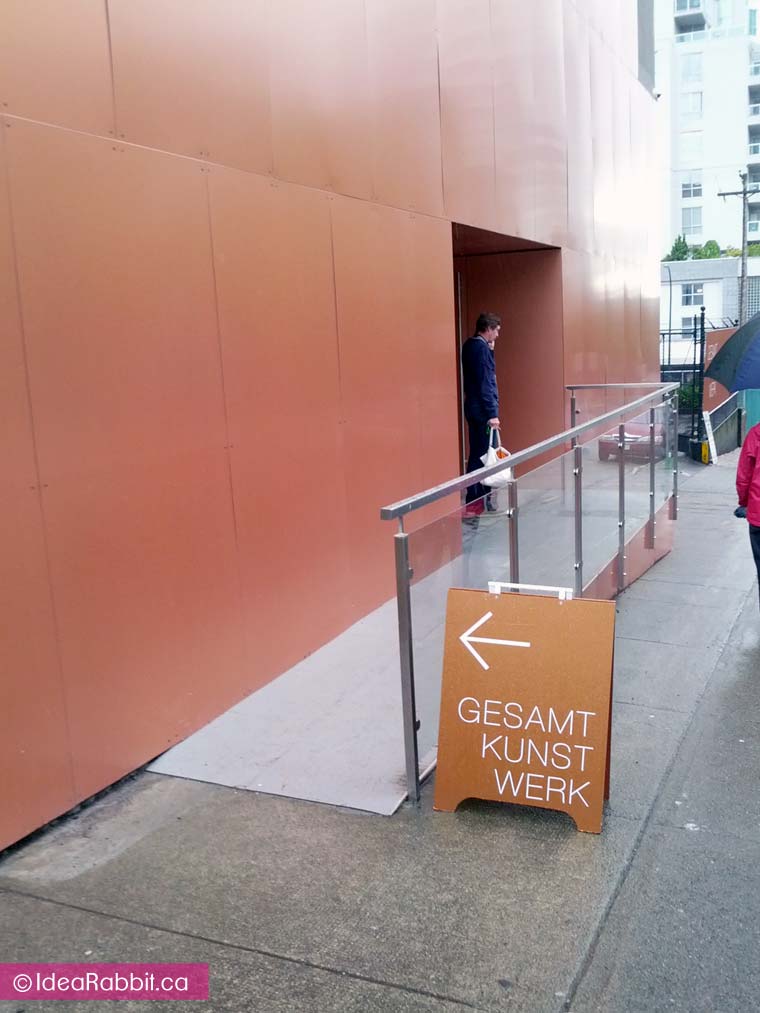 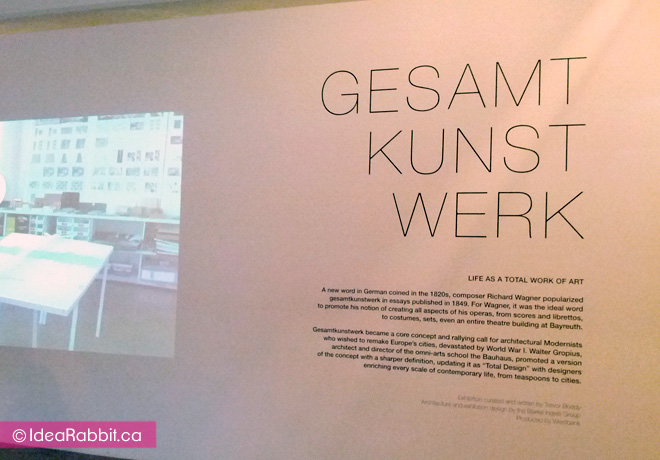 It’s been a 7 years of design work and continuing process of this sculpture masterpiece. There is also the controversial major installation of a Spinning Chandelier by Rodney Graham under Granville Bridge.

The sales centre wasn’t your typical glamourous, fancy ones. It was raw and authentic like you had just been invited into the design office of where the project is being developed. The walls are covered by different options, renderings, tables with miniature mockups of the process and endless booklets of all the details of the building and community.

There was a gentleman who was quite upset and complained about the photos being taken by 3 cameras in the centre. They were positioned at ceiling height and automatically took photos every few seconds. The staff said they were going to be using them for a time lapse video later on, though that didn’t convince the man who didn’t like the idea his photos were being taken (and perhaps used later on) without his consent.

Put that incident aside, it looks like the area is going to be getting quite a facelift to what it is now. 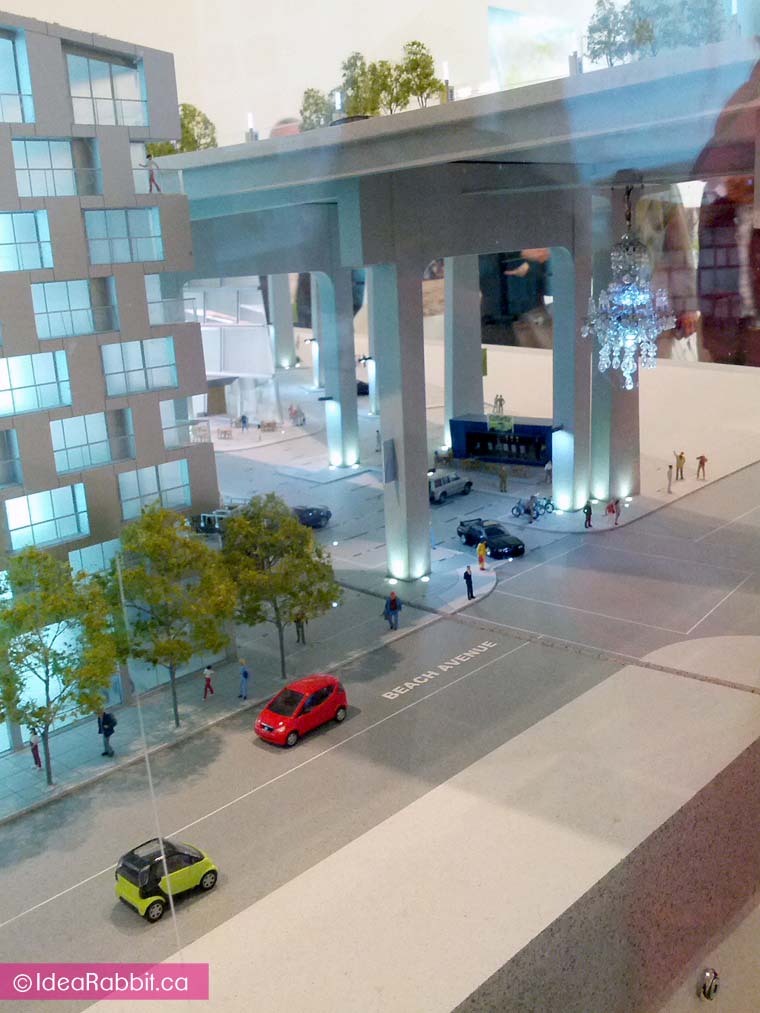 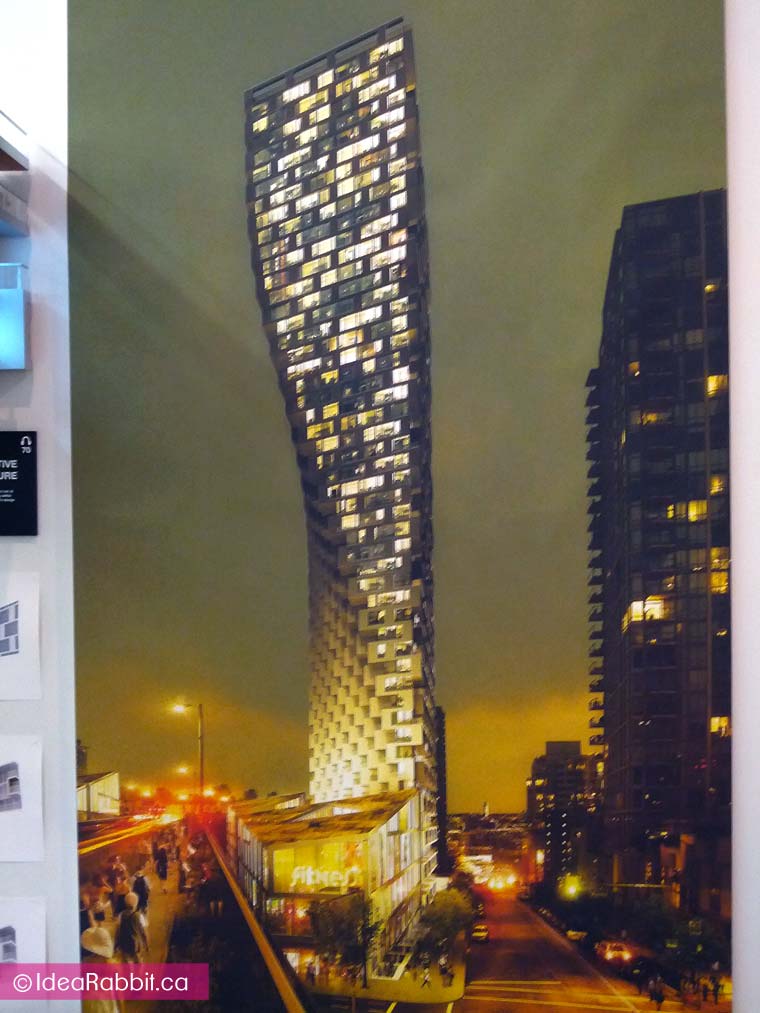 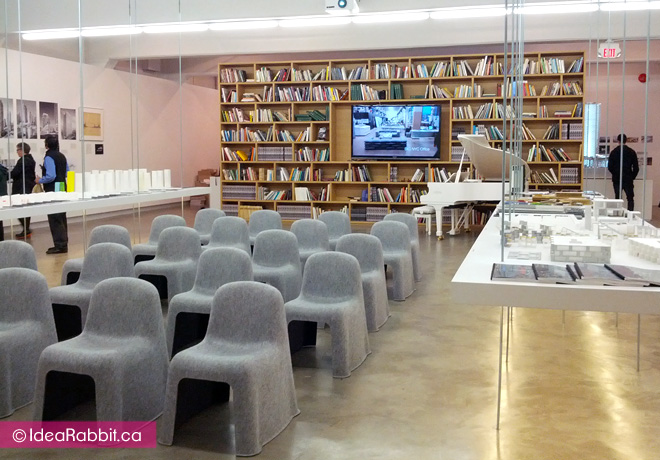 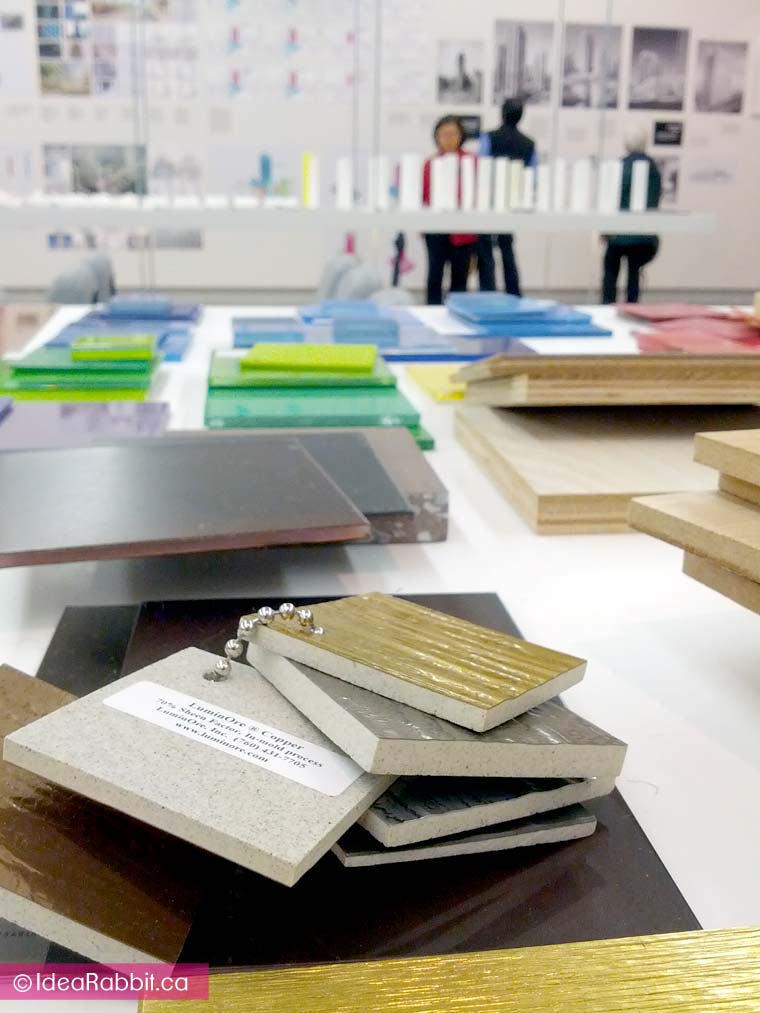 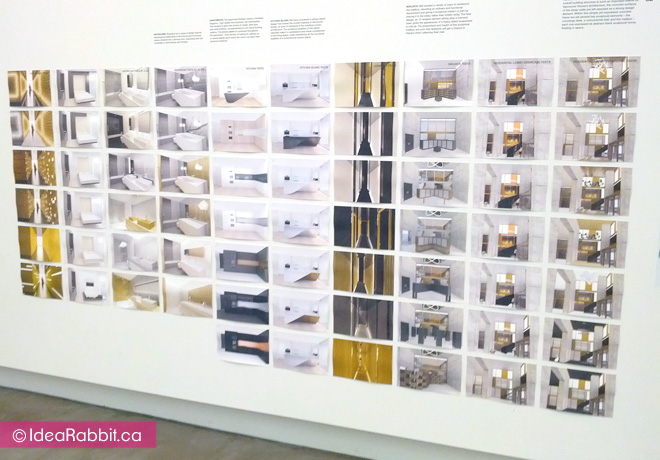 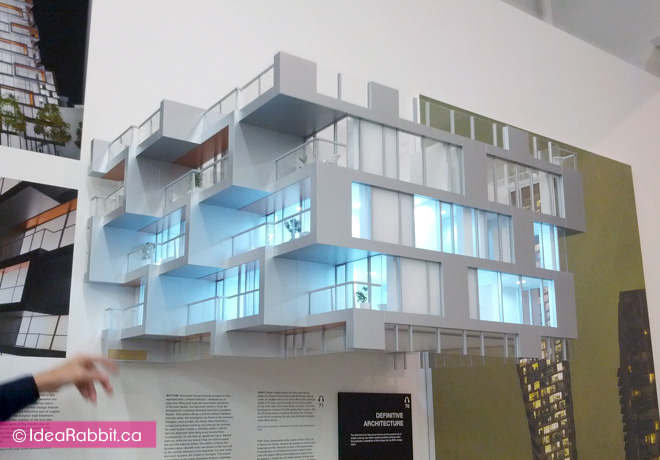 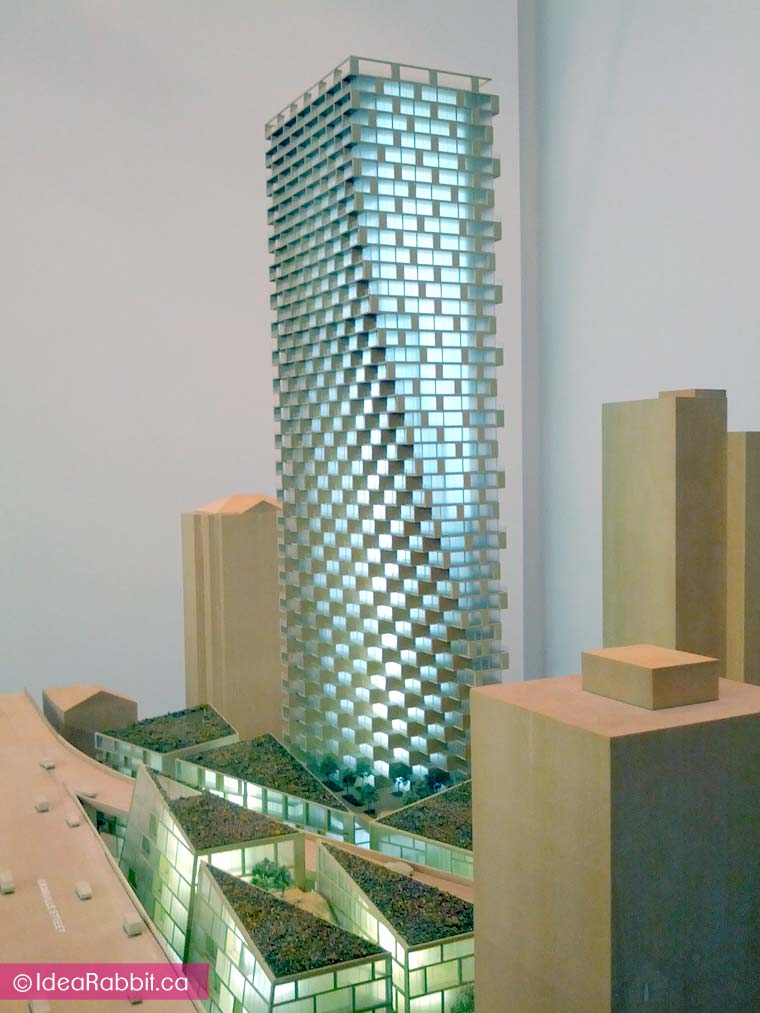 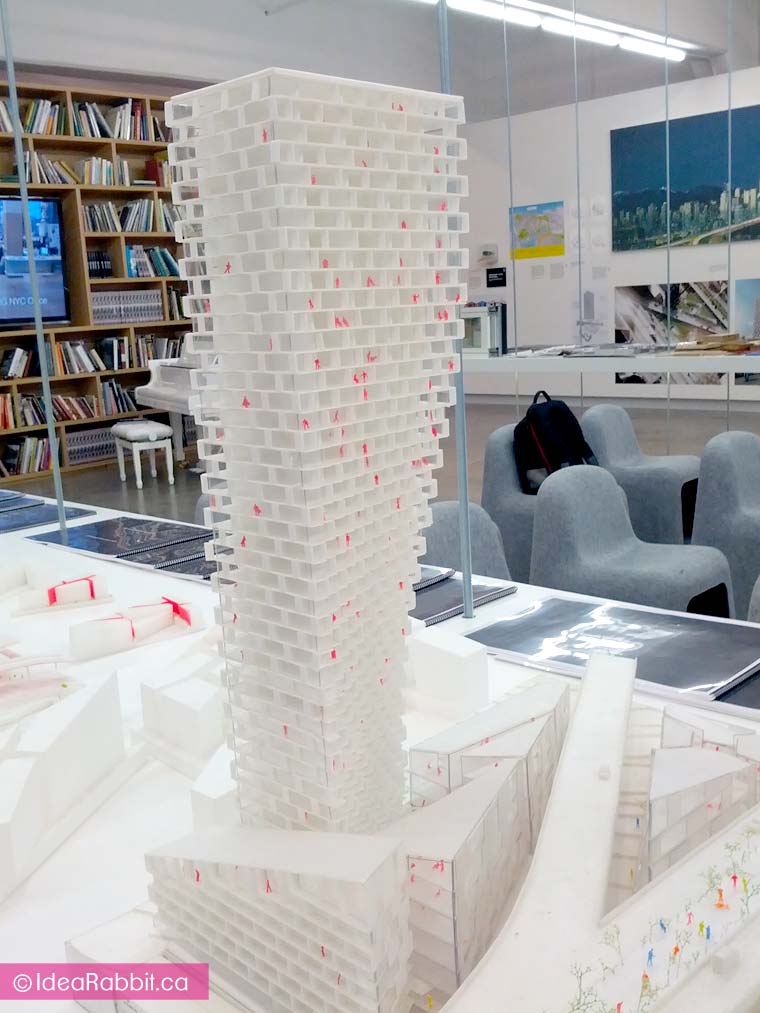 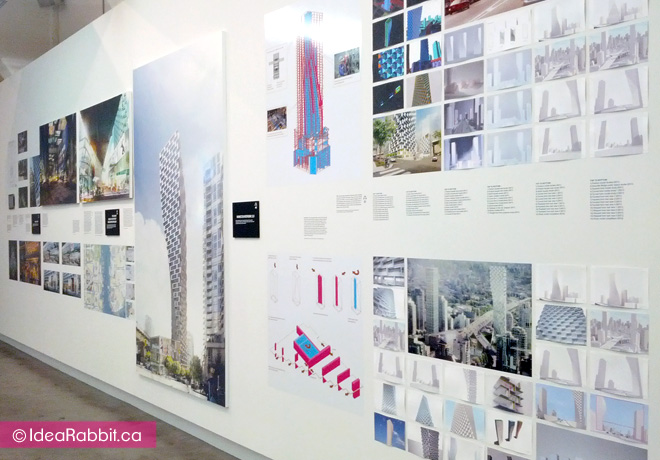 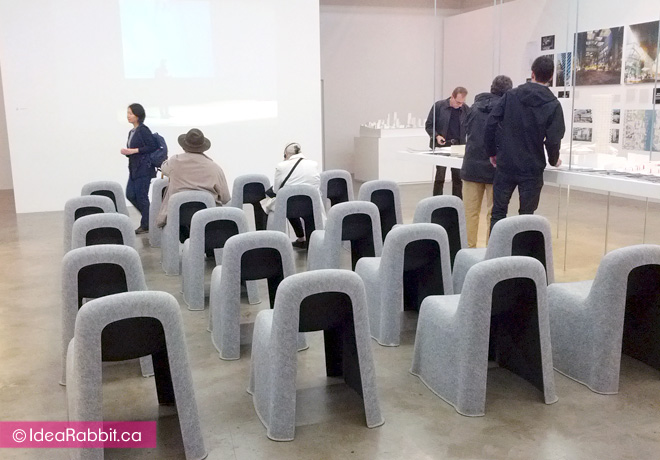 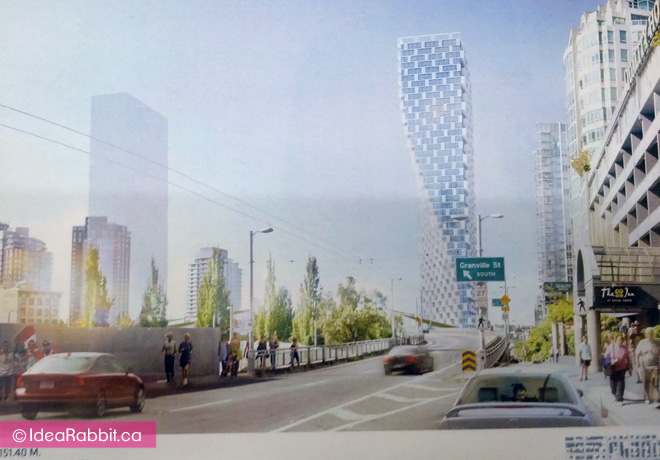 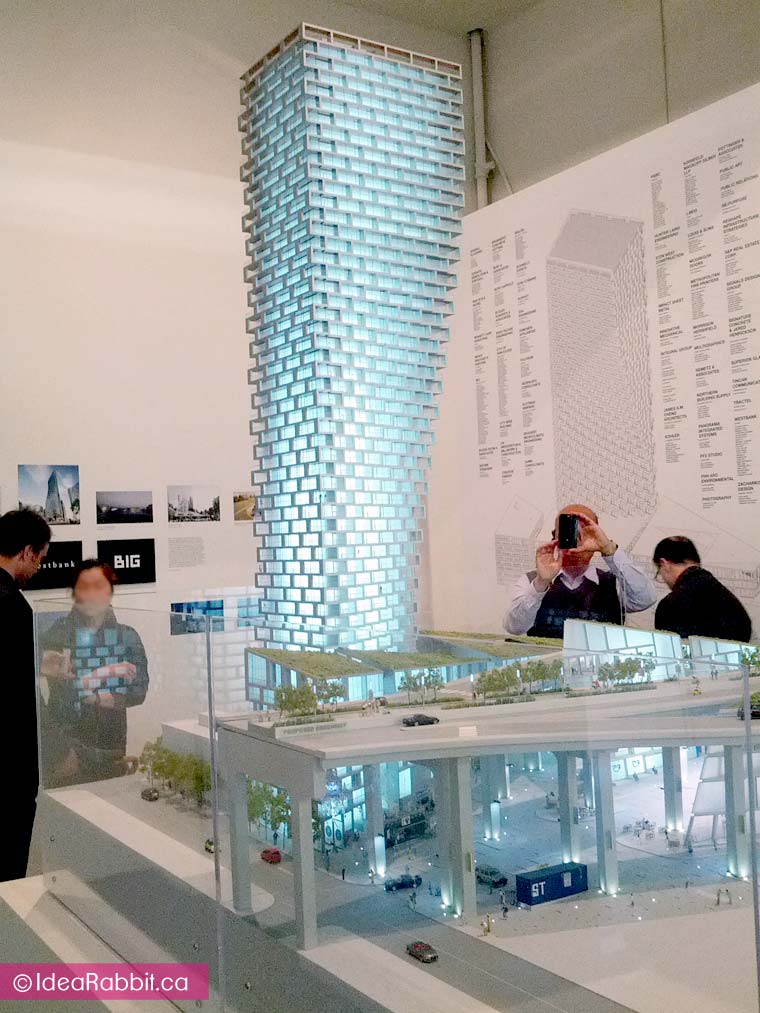 Upon exiting the centre, I walked around the block and  saw some old abandoned buildings. I was intrigued to find a locked up old gas station which in no doubt will be bulldozed for the project. After finding the blog on Gunkanjima, I’ve been fascinated with towns or communities that were completely abandoned, left sometimes in good condition, as if everyone suddenly left overnight. It makes me think of the people that walked through there, worked there and had their lives there.However, unless it’s had some significant historical influence, it almost usually gets bulldozed and built with something new for the future.

I do worry about the increasing living density in downtown. Not just this project, but with so many condos to be still built, I wonder what the city is going to do about the traffic and parking problem. Of course the cost of rent and to own is also very difficult. It will be interesting to see how things develop in this area.

So as mentioned in my previous post when I went to see Bloom, we had stumbled across Mosaic’s Emerson showhome. We went to check it out.
I had been an early fan of Mosaic – simply because of their advertisement, website and the design of the building themselves were modern, slick, simple yet high end. I had been interested in the Dominion, but it was simply in a inconvenient location. 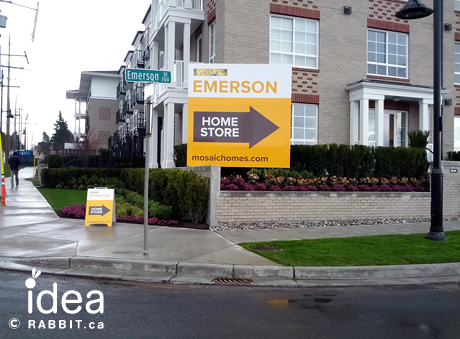 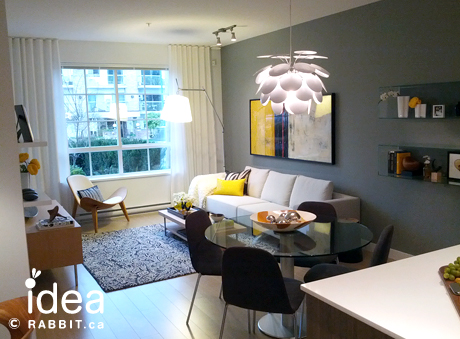 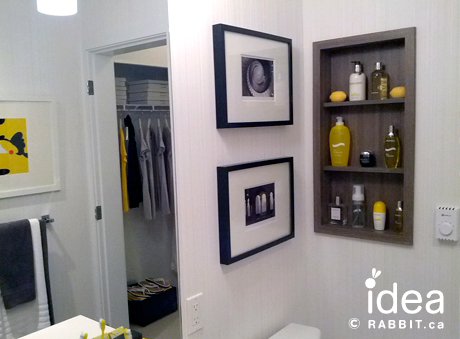 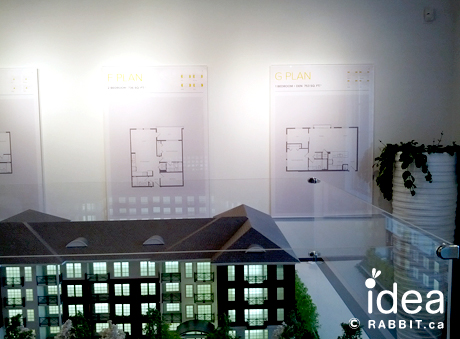 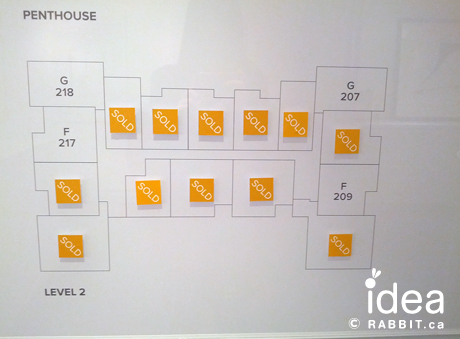 What differentiate Emerson from Bloom is their reputation, and quality. You could see right away from walking into the sales centre that it was more upscale, modern and felt ‘urban’. The showroom was more open, layout was convenient, and the materials used seemed more durable.
The show room was a Plan D – which I and my friend thought was the best layout. It was 631 sf for $279,000. It’s hard to believe but a 505 sf in Yaletown (resale) was on market for that same price in 2006. So, prices are definitely going up even in places like Burquitlam, which is why I am so tempted to get my foot onto a property around here now. I’m hoping that the Evergreen Line will make the property much more valuable after 2015 when the line will be complete.

The staffs were more friendly than Bloom, and willing to help out. We ended up staying much longer than anticipated since they were eager to help us so much. I and my friend had different needs/interest, but they were happy to look into our interests separately. A big thumbs up to Mosaic.

The price wasn’t too bad either. I really liked it, and the fact that most of it was already sold, it made it even more attractive to buy with them.

Their brochure had the same cover as Bloom. White stock with embossed logo. It seems popular these days. As usual, Mosaic’s designs were simple and clear. I am eager to buy…though…I need to work on saving up the money first…:P

I’ve been really interested in the real estate market. Prices have dropped by $10,000 from last year, if not more and it’s a buyer’s market right now. Though with things that are happening around the globe, some people are fearing for that big bubble to burst. However, looking doesn’t hurt, so I went to see Bloom’s showhome one Saturday. 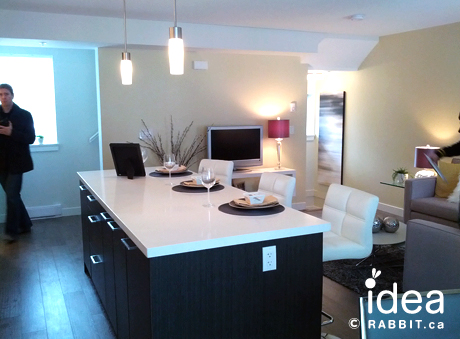 Here are some points to make it a good investment. 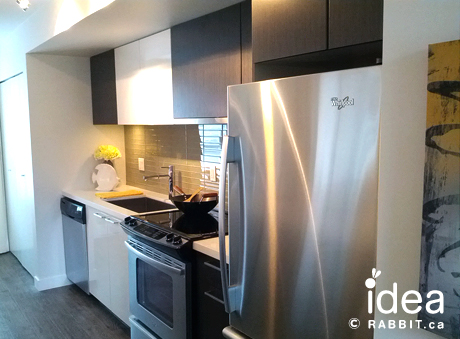 The townhome seems a bit claustrophobic. It could be because the ceiling were low, or that it had angles, or perhaps the wall colours? It just didn’t seem to be open. The layout didn’t quite fancy me either. I prefer the kitchen being a bit more separated from the rest, though I did like how much counter space and cabinet it had. I really didn’t like the idea of having the washer/dryer in the ensuite bathroom of the master bedroom. What if someone wanted to use it and someone else was sleeping in the master room? Very inconvenient. We walked around the neighbourhood as well and just so happened that we came across Mosaic’s Emerson show home. I had initially wanted to go see Mosaic’s Dominion. I had even suggested it to my parents early last year. However, the location was what put me off…so I was excited to see a Mosaic’s project right in the neighbourhood in which I thought was the best investment. Check out my post next time!

The showhome is located at 618 Langside Ave
See more at http://www.liveatbloom.com