On Christmas Day, we were driving to the US and we stopped by – gasp! at Jack in the Box after driving through customs. I always feel really greasy after leaving here – could be because I see how many calories each meal has up on the menu board, or because I see so much grease coming from the food itself. 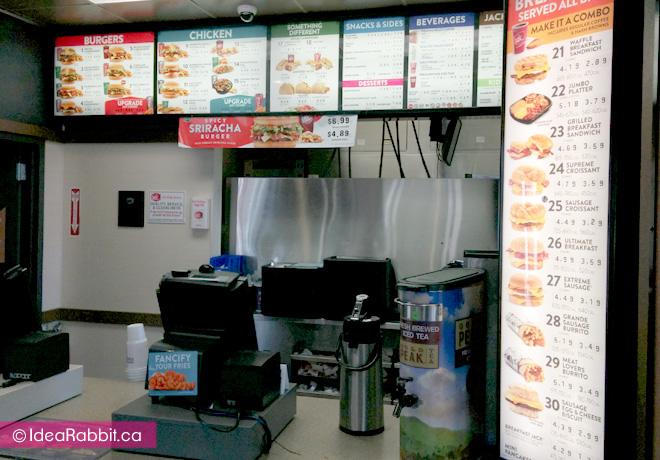 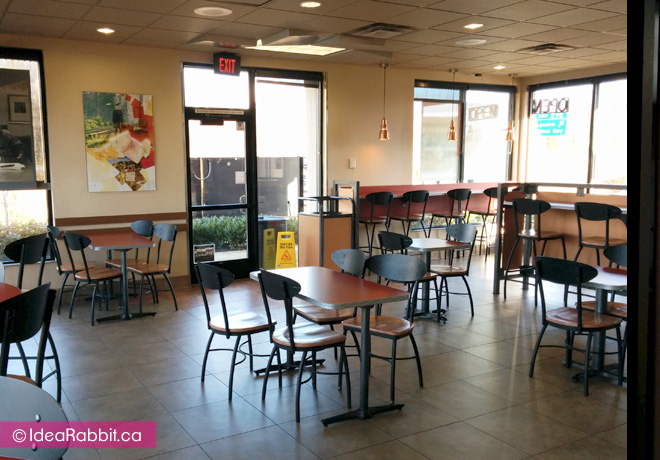 I ordered just the 10 Chicken Nuggets $2.59 USD while Sheepie had the Jack’s Spicy Chicken Burger meal with small curly fries and a small drink $6.99 USD 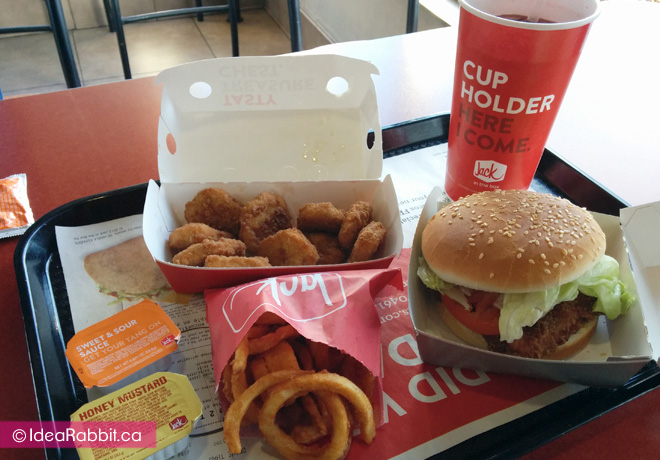 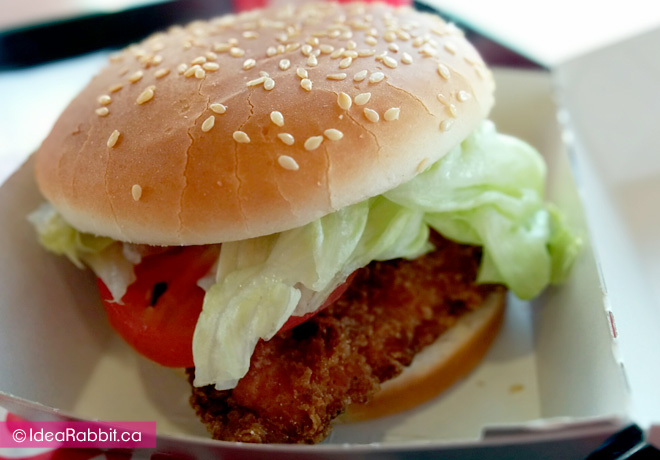 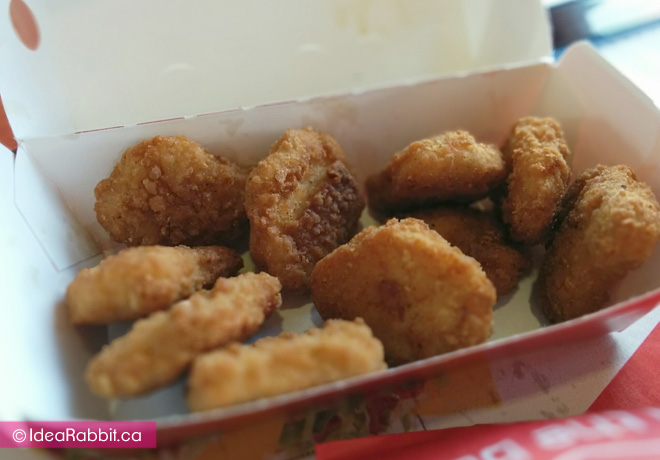 The nuggets were brown like they were deep fried in old oil. They were much smaller than McDonald’s or Wendy’s. Wasn’t crispy, didn’t taste as good either and left huge grease stains on the boxes. 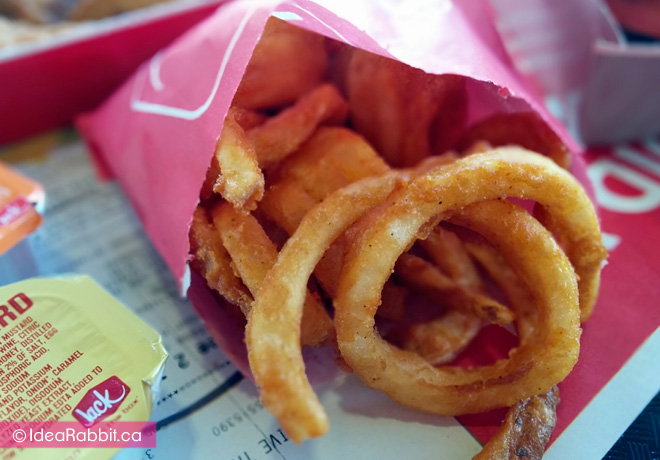 The curly fries were ok.
The restaurant was bare when we came in, but it got pretty busy when we were about to leave as it was the only place open in the area.
Next time, I will order a chicken salad instead…lol

The restaurant is in the middle of nowhere it seems…but hard to miss with it’s vibrant turquoise exterior colour. It’s the only restaurant on the Peace Portal Drive in that area. No neighbours except some trees. Inside is interestingly decorated in a 1950′s style, from posters, guitars, and red and white checkered table cloths.

The servers are really friendly, chatty and seems down to earth. There wasn’t a whole lot of customers, so the pace was pretty slow, not that we were in a hurry or anything. We had pretty much drove all the way from Vancouver, BC Canada to Blaine (Washington, US) to try out this restaurant that my friend had tried several times and he wanted me to try it out. 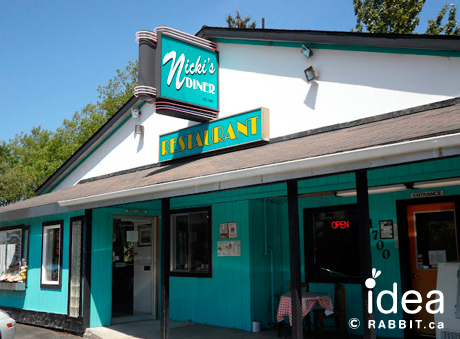 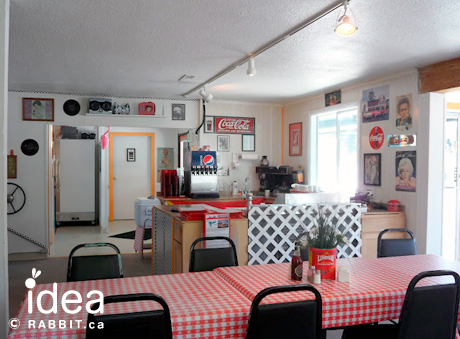 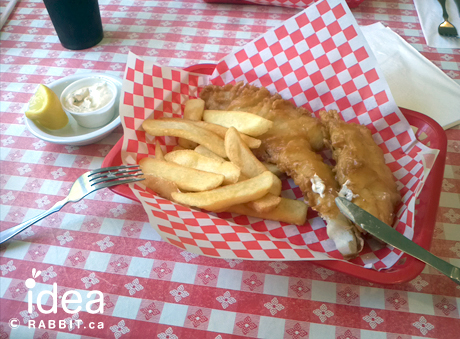 The food portions, as with any restaurants in the US as it seems is large. I had fish and chips while my friend had hamburger and fries. His hamburger was gigantic! Wow!
I had a lot of big pieces of fish too. Too many to finish. I’m normally not the type of person that eats ‘fried’ food so it was a bit hard to gobble down. However, the taste was fairly good!

It’s also nice to see that the owner takes time in replying to customer’s review on TripAdvisor  in pretty long replies too! Good for them!

When we went there for the second time in Feb 2014, the table cloths had changed to a dark plastic blue. I thought the checkered plastic covering where cheap looking before. Now it’s not just cheap, its got this uncomfortable, unsettling feeling, and reminds me construction sites with blue plastic bags or tents/tarp… 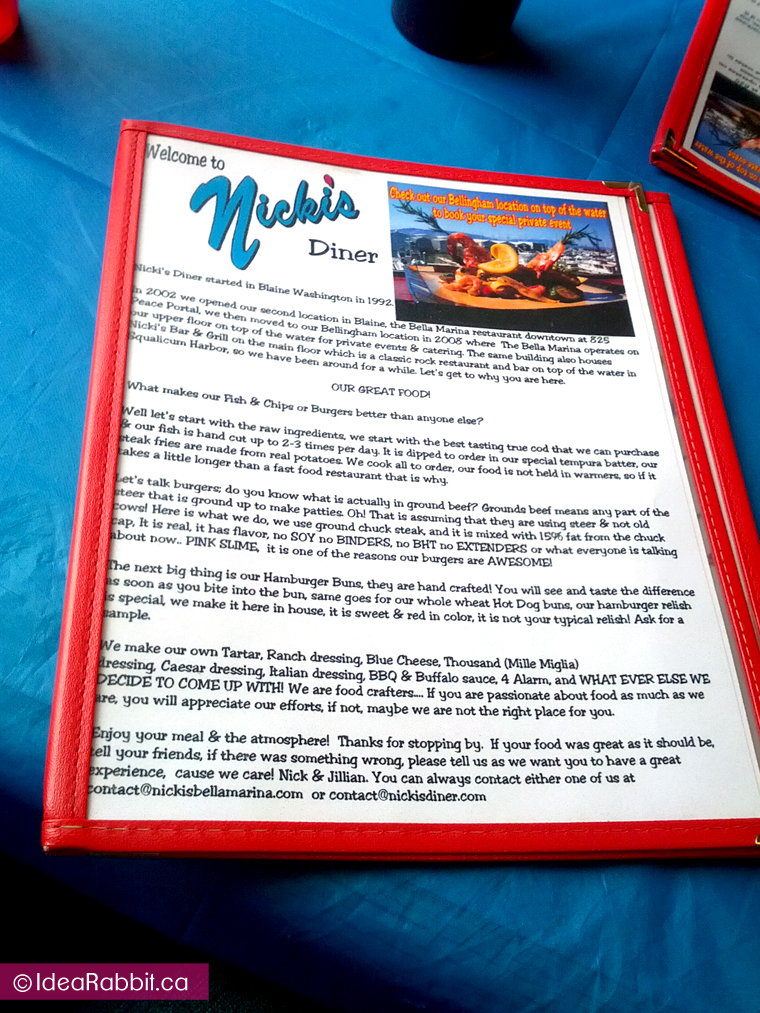 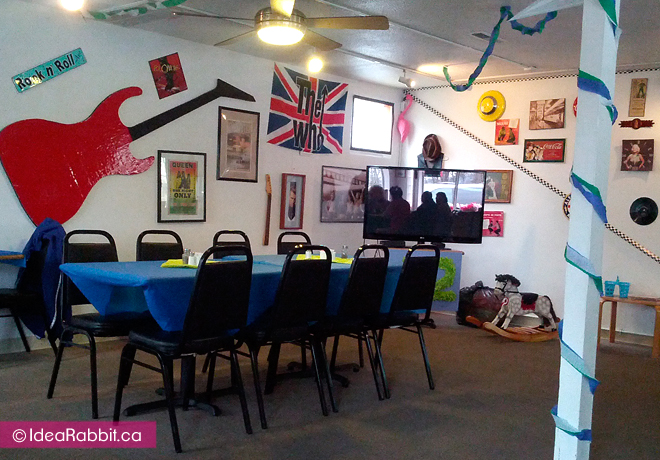 We ordered Chicken Strip Dinner $10.95 to share amongst the two of us. It had 3 deep-fried, large chicken breasts which was crispy – and did I mention large? LOL It came with all-you-can-eat fries which were flat and big – though not wedges. They were hot, right out of the fryer. I had seconds, and by that time, I was pretty full, even though it was only half a dish that I had.

The staff (one lady) is friendly and is a laid back restaurant.

Sadly, Nicki’s Diner is no longer called Nicki’s. The sign on the restaurant says it’s still Nicki’s but their menu says it’s Lizzie’s and it was confirmed after talking to the lady that was there last time. The inside is still the same, but luckily, they got rid of their blue plastic table coverings. From what I can tell, the menu is still the same, except the wacky design can make you feel a bit dizzy. There are fake flowers in their flower beds outside of their windows making it feel like it’s always spring or summer. 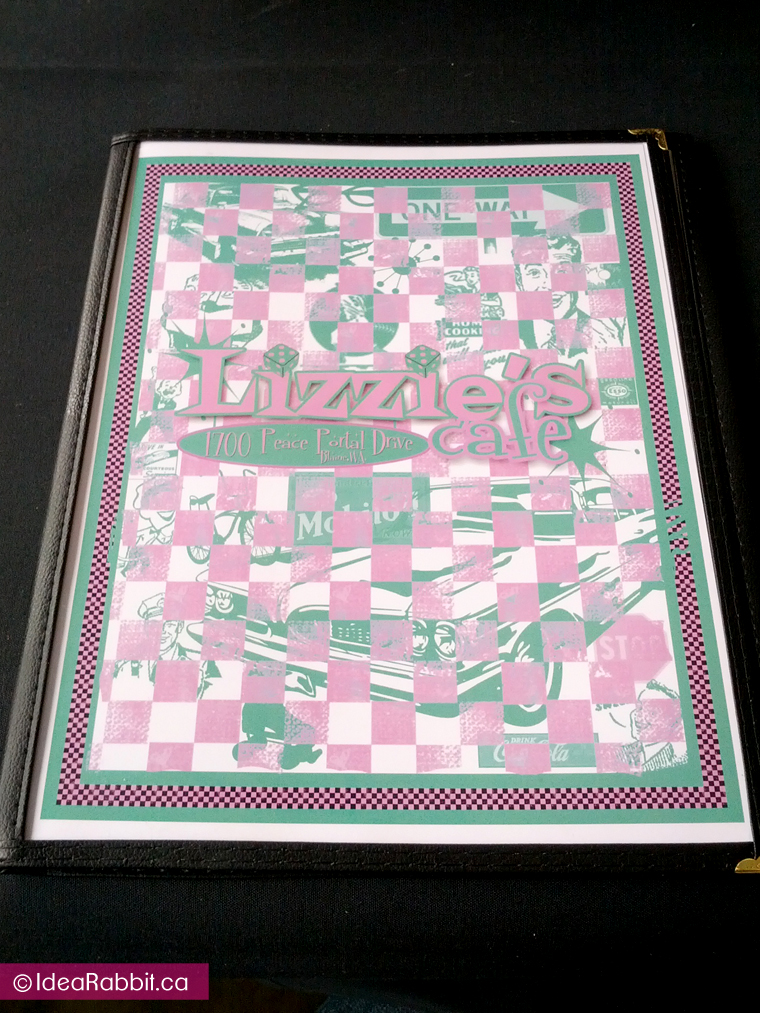 Nicki’s is now Lizzie’s. Their new menu is wacky, but the content is pretty much the same. 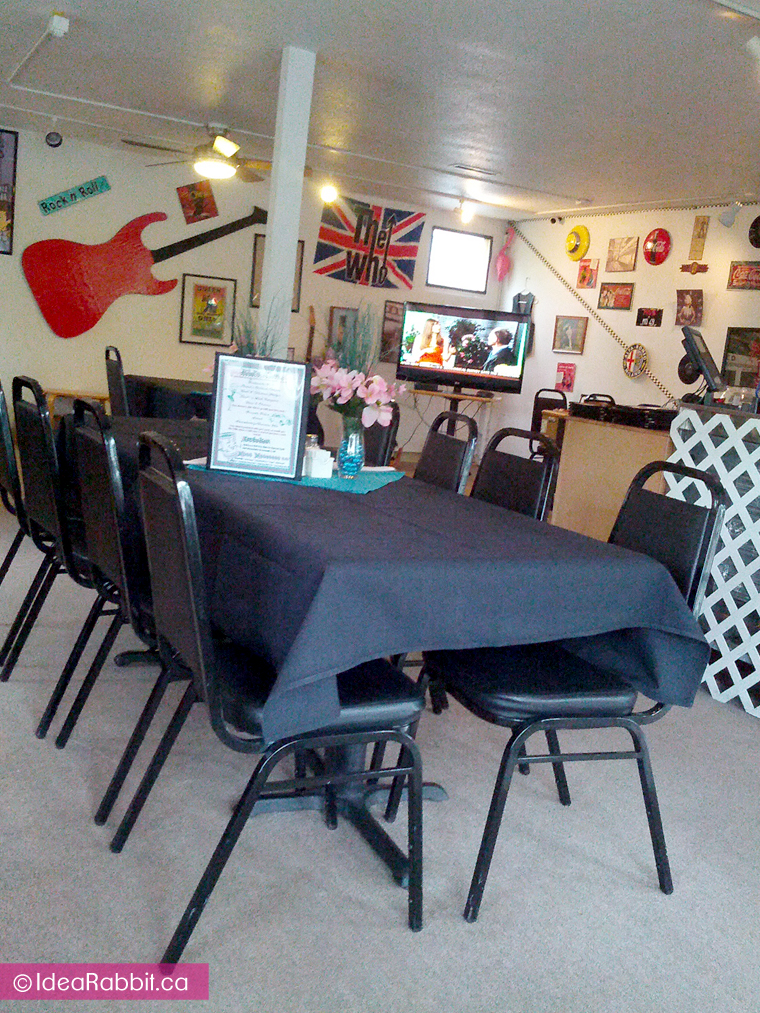 Yay! They got rid of the cheap garbage tarp looking blue sheets and got table cloth instead! 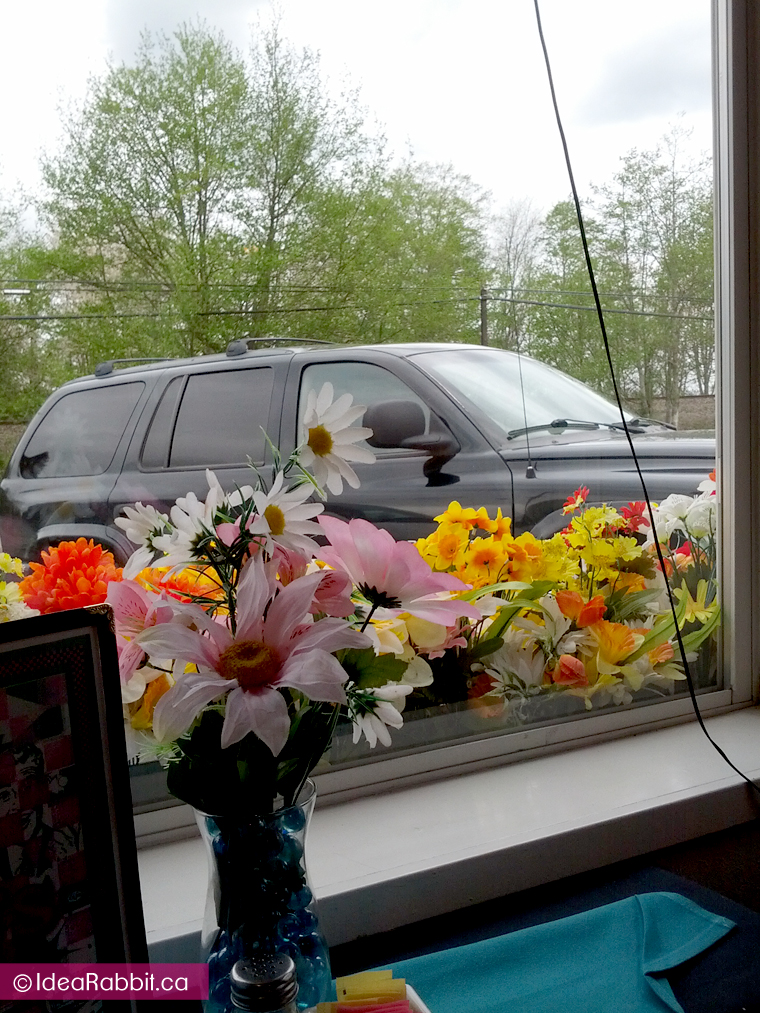 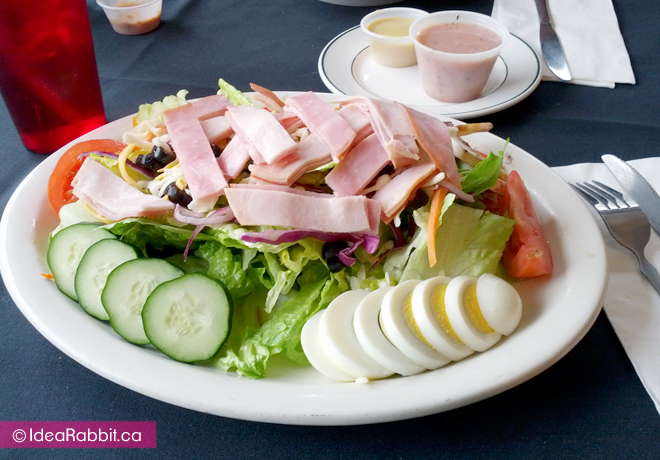 Salad $12 – the photo does not do justice to just how huge this thing was! 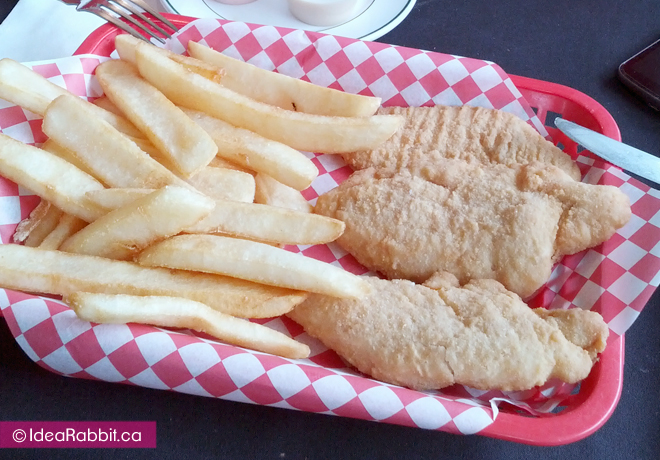 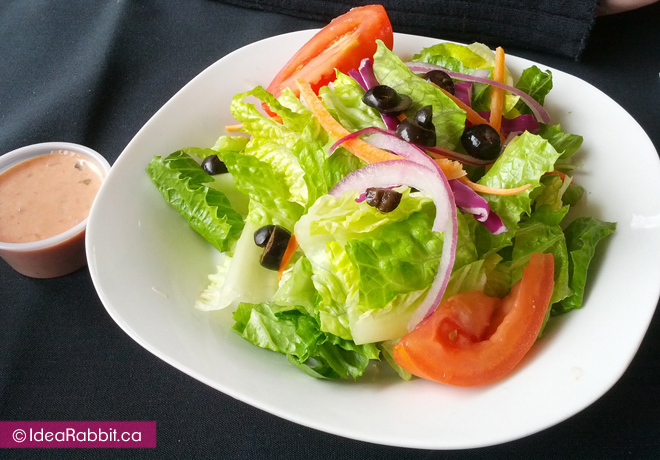 I ordered the salad $12 and WOW! The dish was humongous! Luckily, it’s a huge dish that’s pretty healthy. I surprised Sheepie and the lady that I finished the entire salad on my own, plus a strip of chicken from Sheepie’s Chicken Strip Dinner (salad, fries and 3 chicken strips).
Eating at Nicki’s or Lizzie’s is now our first stop every time we come across the border to the US lol. It’s become our tradition. I was reluctant at first because their menu seemed really greasy and unhealthy, but now that I now there are some salads (that are quite filling), and good for the price, I don’t mind.