Disclaimer: *This was a complimentary meal. This post was not edited or written for monetary compensation, and are solely my opinions and observations. 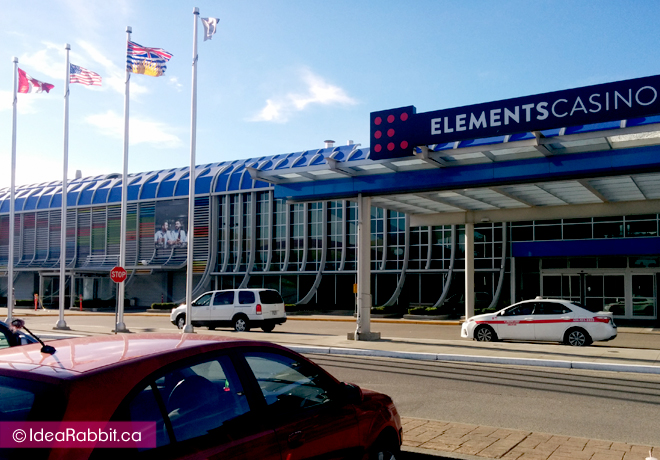 I was kindly invited to the newly renovated Casino Elements for their exclusive dinner; a seven course dinner with all-you-can-eat dessert! I was pretty stoked!

It was hosted on a Friday evening, so trying to get from downtown to the location in Surrey took us 2 hours! However, it was totally worth the drive!! 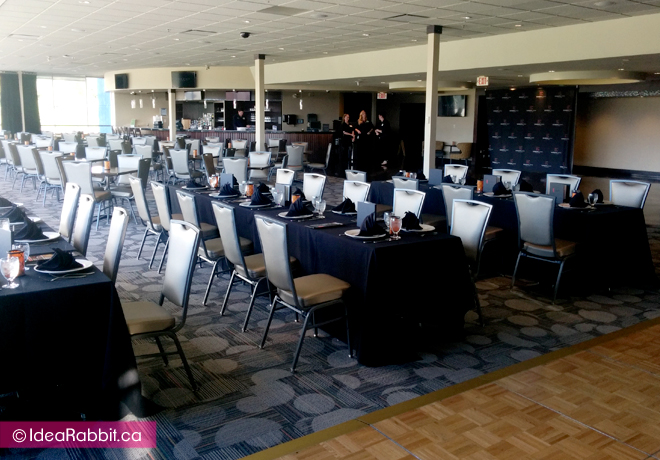 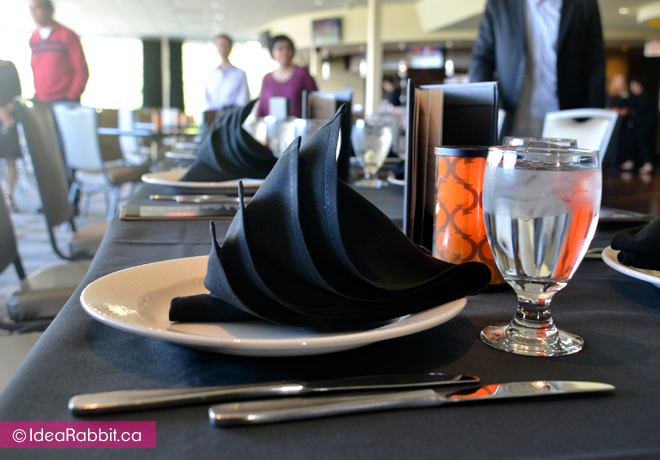 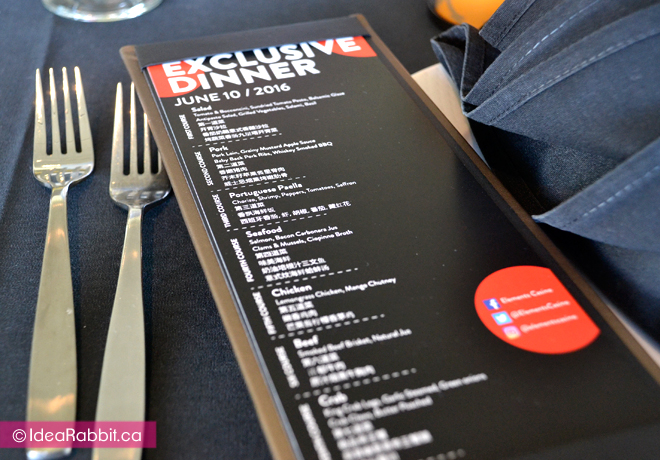 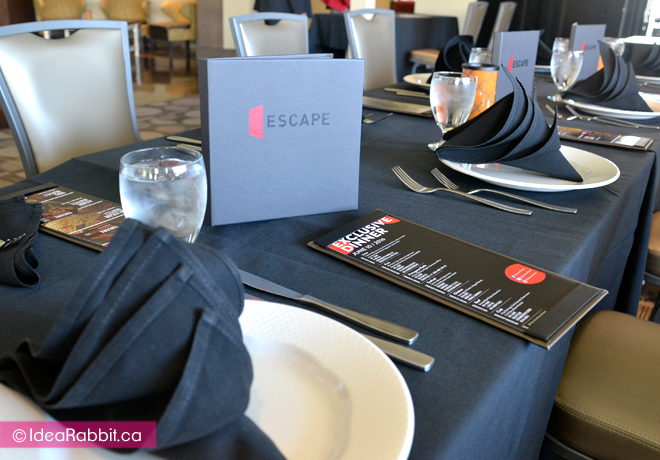 Dinner was held at Escape! on the second floor. It was an open space, easily seating over 100 diners. One side is all glass, letting in natural light to brighten the room. There is a stage on one side where there are free live entertainment from bands, local acts, stand-up comics every Friday and Saturday night. Check their website to see who’s performing. 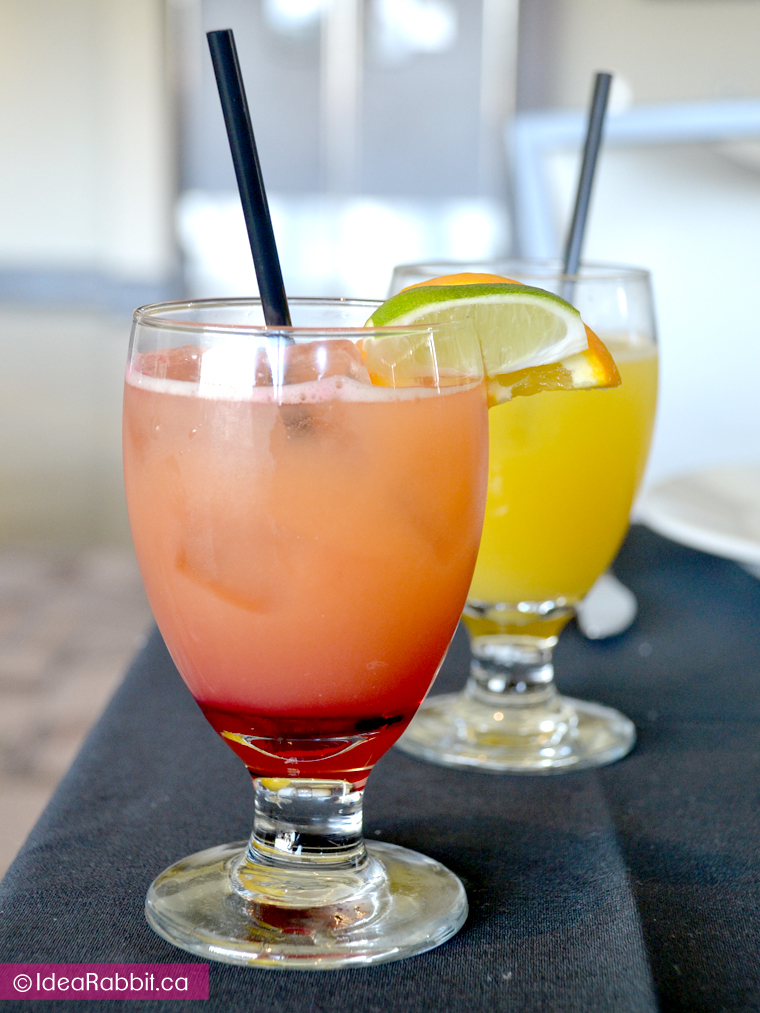 I started off with a Shirley Temple which was tropical and beautifully presented, getting me into a ‘summer’ like mood. It tasted good too! It’s been a while since I last had one 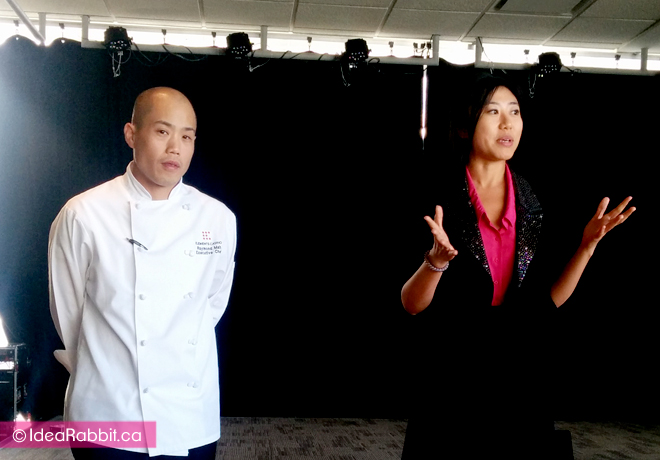 The executive chef Raymond Mah, nicknamed ‘Chef Ray’ cooked up a seven course meal for the event. Keep in mind that these items are served on various days. MMMMmmmmmmm! Just loved it! The tomatoes were fresh and firm. The small mozzarella cheeses were semi-soft and the mix of herbs and balsamic glaze were just perfect! I could have just stuffed myself completely with this one dish! Selection of cooked carrots, onions, red and green peppers, mushrooms and salami. Sheepie and I thought the onions were squid! LOL. This is just me, but I usually cook my veggies quite raw since I like the hardness or crunchiness (even if that means not getting the most nutrients from them, like  cooking mushrooms brings out more potassium), but I like them raw (or close to it). Something about gooey veggies that I don’t find as appetizing. I would still eat it of course. Since most of the items were plain (except the saltiness of the salami), it would have been nice to have some additions of olives. Beautifully presented with the colours and layout. The meat was super soft and juicy. It was very impressive! I’ve rarely had ribs in my life (can I call myself a foodie then? lol). In fact, I don’t really remember ever having one in a good restaurant. I think I’ve avoided wings and ribs because they tend to be greasy and have rarely any meat to chew on. However, these ribs were huge and presented on a wooden board. These ribs were amazing! Wow! Glazed with rich, smokey BBQ sauce, the meat was plentiful and moist.  A big thumbs up! 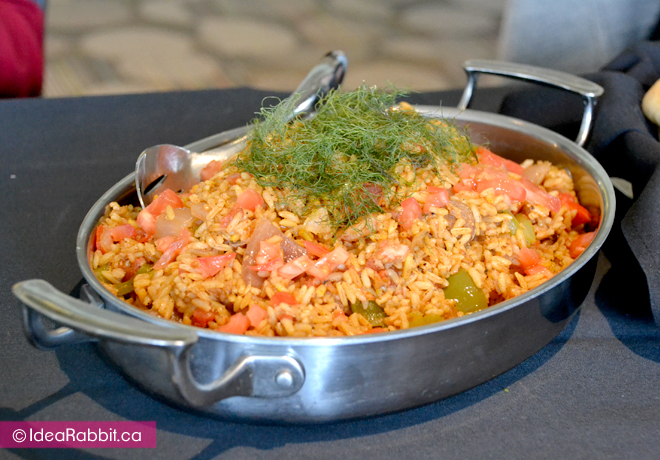 Sheepie wasn’t overly thrilled, but that’s because he’s not a big fan of rice to begin with. My friend also commented that it wasn’t the dish she cared for, but I loved this dish! It was dryer than most paellas I have had, which I actually like better than some which are stickier and mushy. As a person who loves fried rice, this was a delight for me, lol. 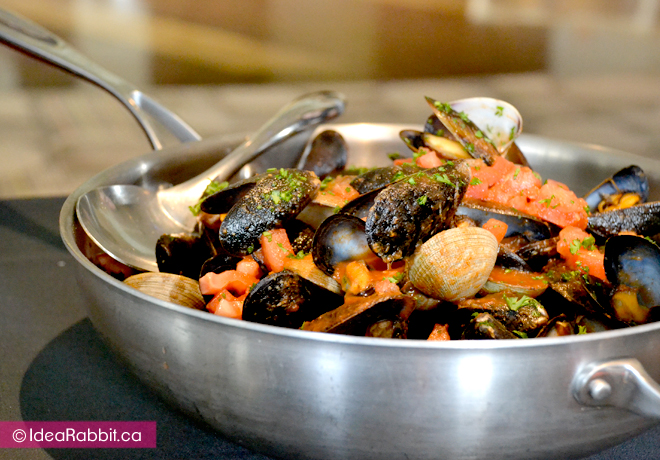 Clam & Mussels in a Cioppino Broth

It turned out that the shells I picked up were all empty…so no comments on the contents of the shells, and it wasn’t much of a stew but the tomato was enriched by the herbs, wine and seafood umami. 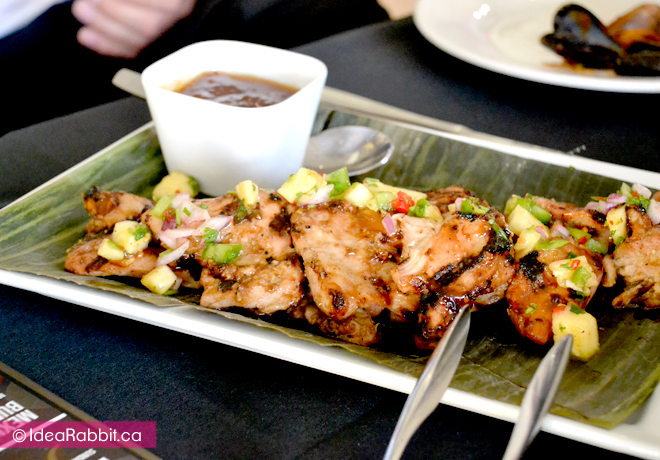 Sheepie LOVED this dish the most. He fell in love with it. The meat was juicy, with the right amount of burnt charcoal flavour on the edges. The pineapples gave it a sweet touch while at the same time giving it a cheerful and energizing visual appeal. 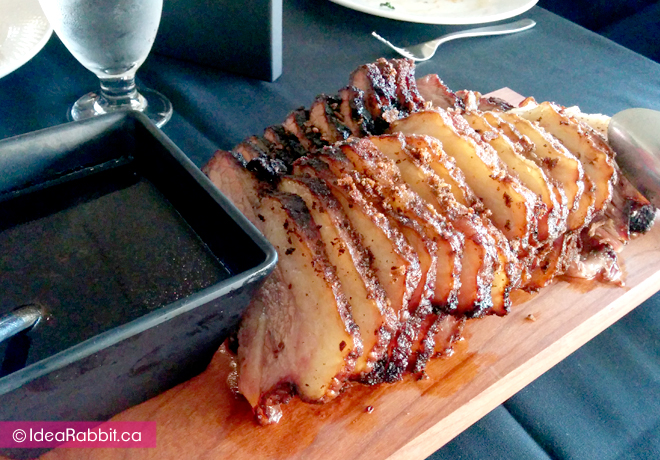 Nicely roasted on the outside, but kept super juicy and moist inside. It was 1/3 fat, so Sheepie and I ended up cutting those parts off, but otherwise, the natural jus covered brisket was delicious! 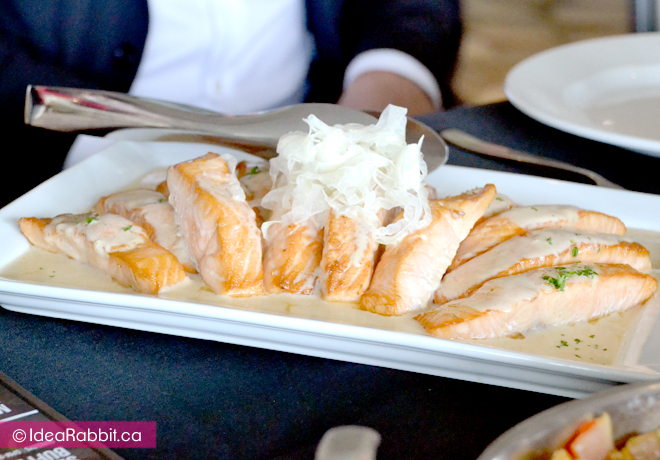 The salmon were soft and savoury.  The lightly flavoured cream went really well with the fish. I love salmon, so I had several pieces, hehehe. 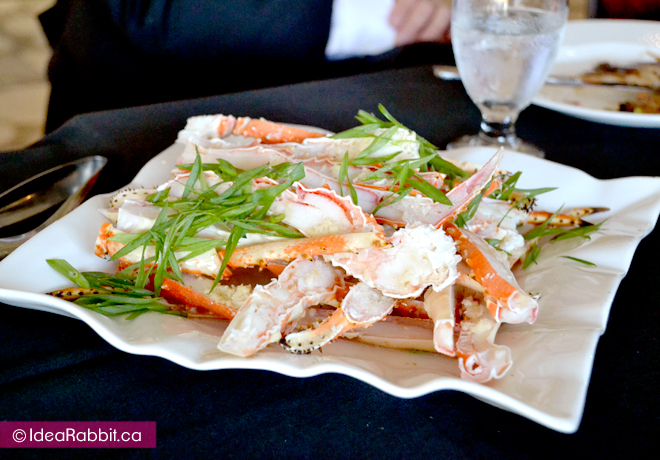 Sheepie and I found it to be a bit too salty. On top of that, the legs were topped with a lot of garlic. Like A LOT. Sheepie, who has a deficiency of tasting garlic, didn’t notice, but I found it very garlicky. Don’t get me wrong, I do love garlic, but it was a tad bit too much, so I had to scrap off a spoonful from some. The meat otherwise was superb quality. With most of us full, no one was from our table was attempting to go through the hassle of carving out the meat from the claws…which was unfortunate. Such good meat, rare to get and expensive to order! I did take some home, and had some there. It was loaded with a lot of meat, though slightly a bit fatty from the butter. But as a person who no longer have butter in her fridge (for about 5 years now), I become sensitive to when butter is used. 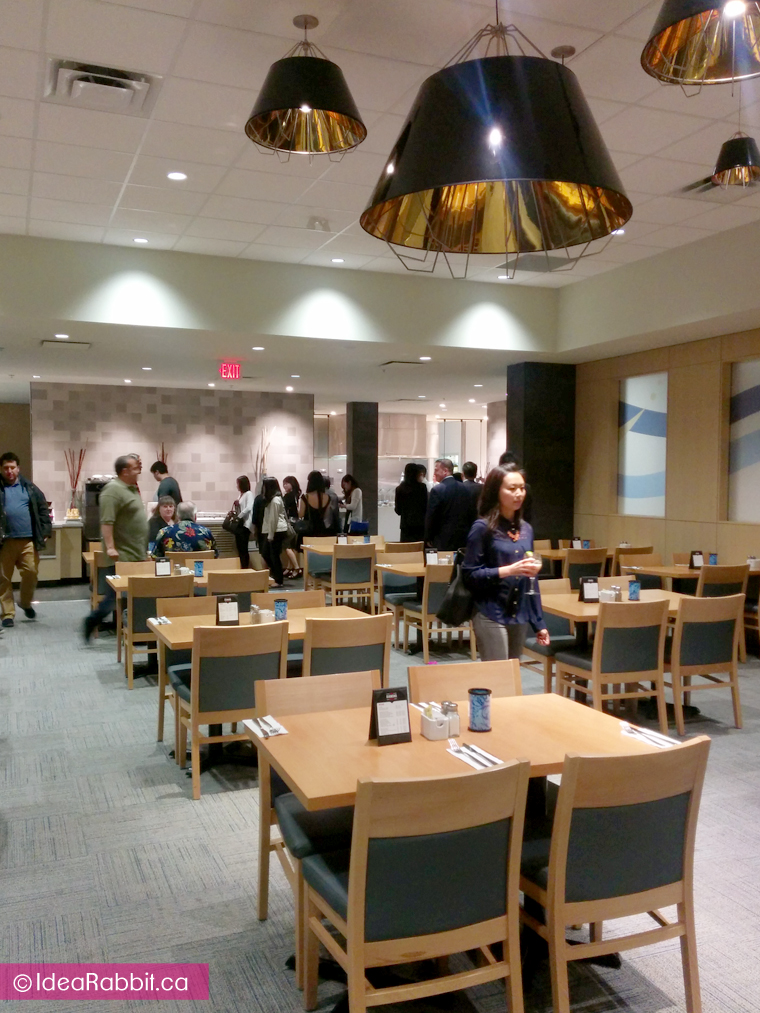 Afterwards, there were unlimited desserts at the Diamond Buffet downstairs. I tried the vanilla and chocolate mix soft ice cream in a cone. I also had the chocolate mousse pudding. Light and not overly sweet. Sheepie who has quite a bit of sweet tooth was in heaven!

WOW! All I can say is, what a paradise dinner! The staff were very professional and friendly. The food was amazing – just wished we had more time to eat them all!

Afterwards, we were given a tour of the casino, and the Encore Rewards card to play at the slot machines. I think I’m a bit addicted now! LOL.