We were in the neighbourhood, so we thought we’d dine at a restaurant that looked like an authentic Italian restaurant. The entrance was all lite up and was very inviting. Also, their early bird menu that was posted on their window had attractive prices.

The interior has a nice cozy atmosphere, and since we were a bit early for supper, the place was still fairly empty. As soon as we walked in, a friendly gentleman greeted us. 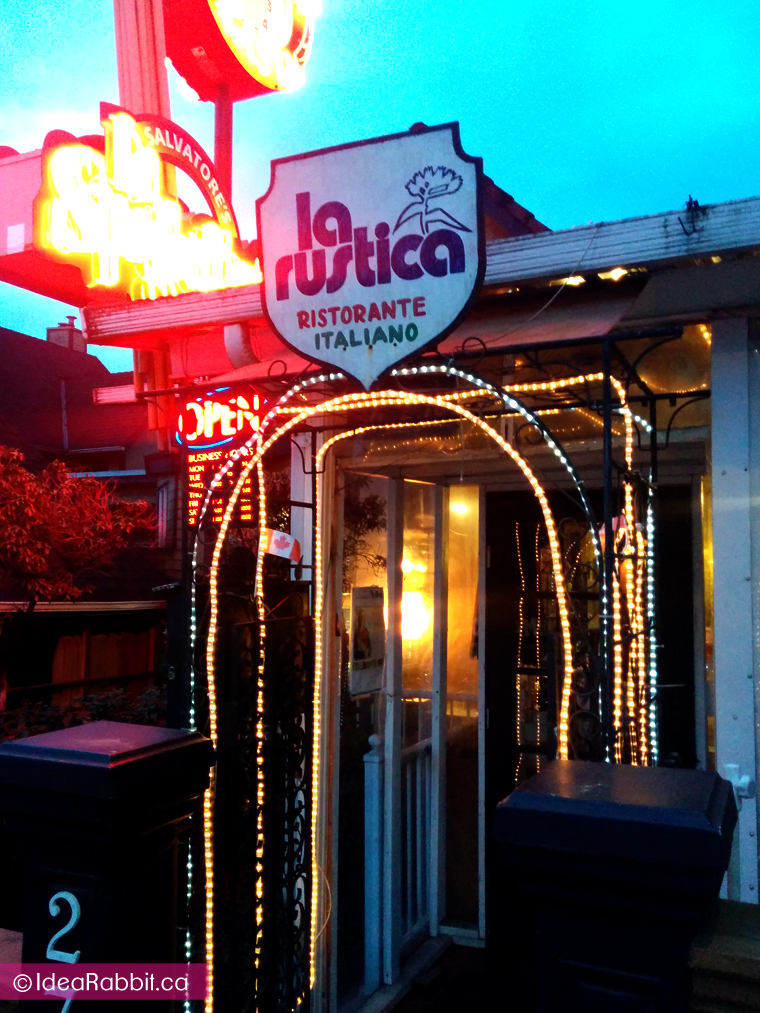 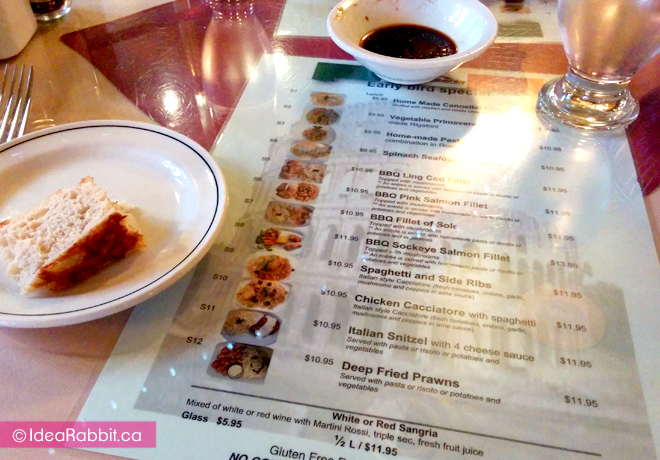 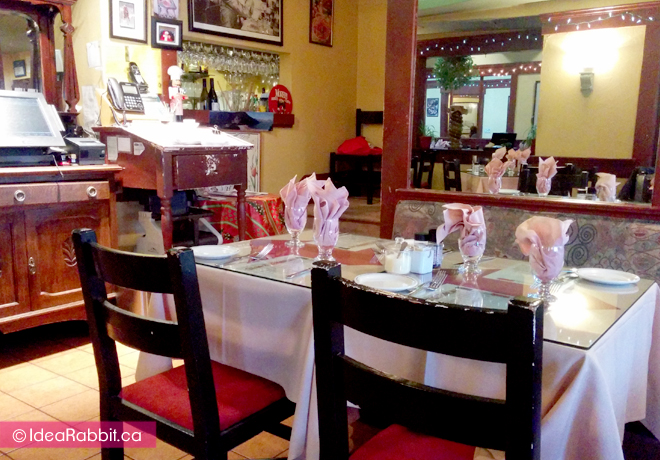 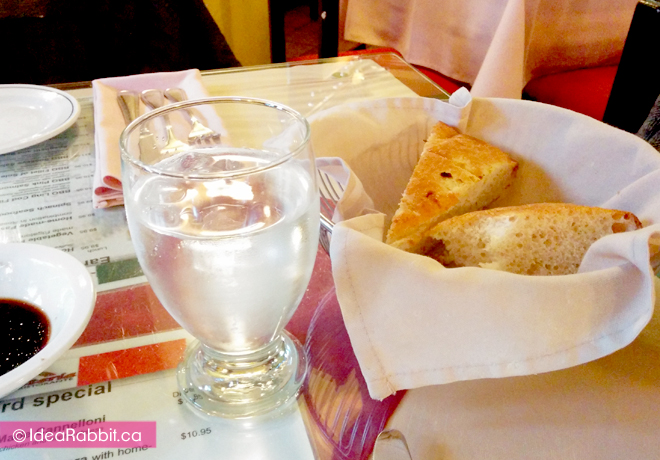 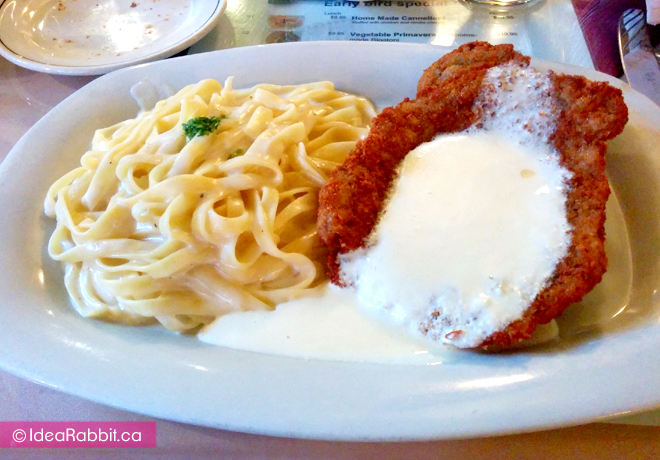 I ordered the Italian Snitzel $11.95 with 4 cheese sauce. It was interesting to see a German dish being called ‘Italian’. It was served with pasta (though you have the option of choosing risoto or potatoes instead) with vegetables. 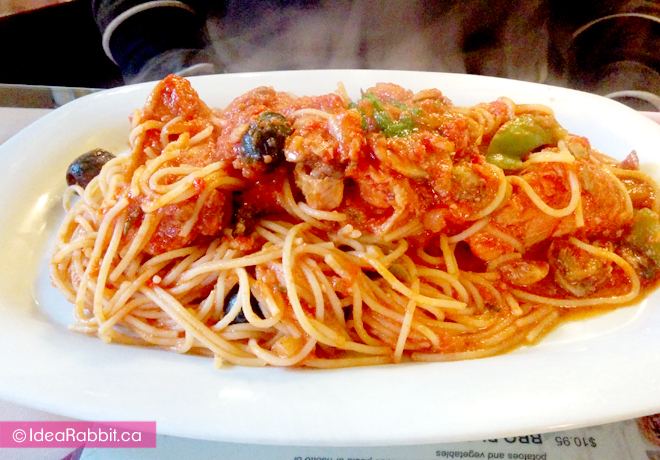 Sheepie had the Chicken Cacciatore $12.95 with spaghetti mixed with tomatoes, onions, garlic, mushrooms and peppers in wine sauce. On the menu on the table, the price is $11.95, but we were charged a dollar more. I guess their prices haven’t been updated? It was steaming hot!

With both dishes, the portions were huge! Wow. Actually, I ended up liking the flavour of the Cacciatore, so we swapped plates, lol. Even then, there were leftovers, so I had the remainders to go. 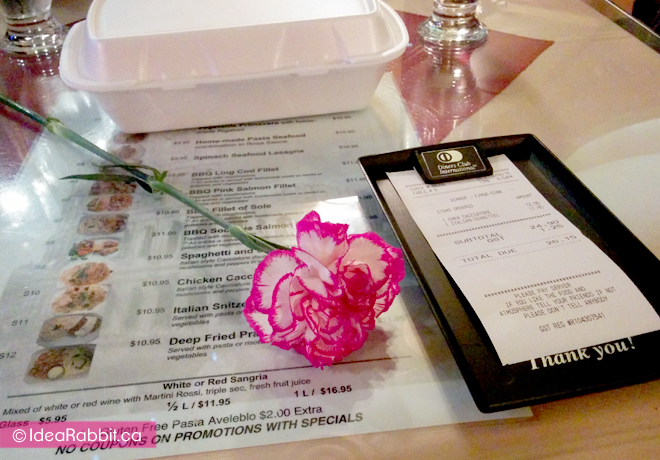 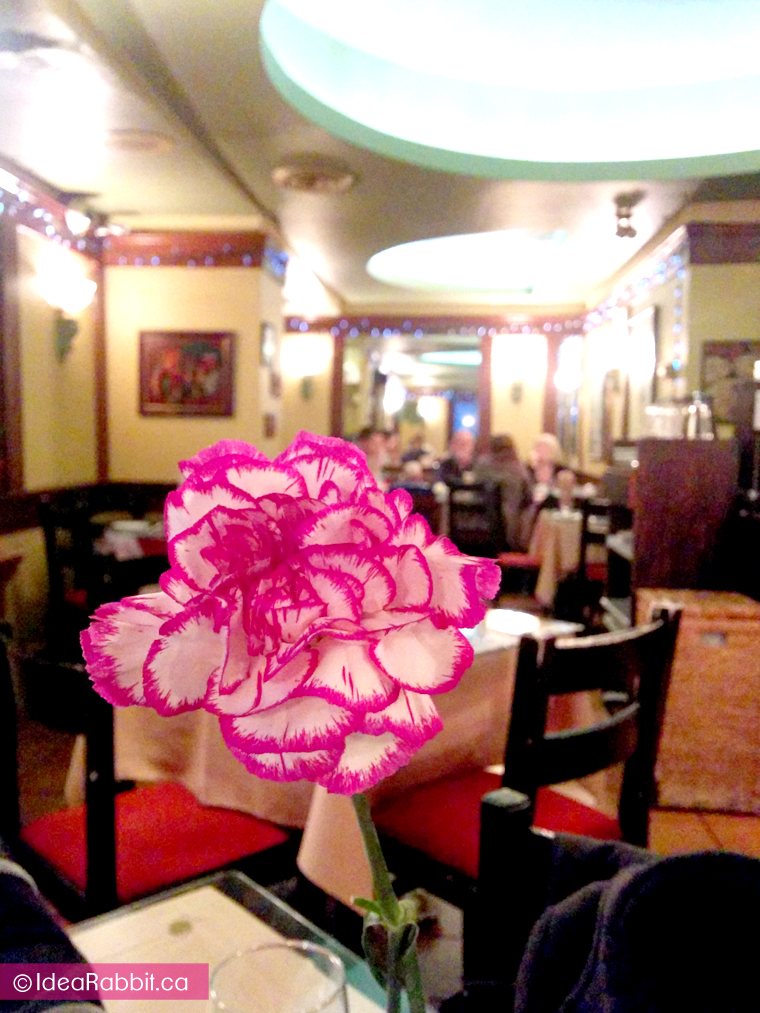 At the end, I had a pleasant surprise of receiving a carnation! I’ve seen restaurants giving them to ‘mothers’ on mother’s day, but this was just a normal day, and I wasn’t a ‘mother’. I did see other females receiving the flower, so not sure if this is a regular thing. Either way, it was a nice way to finish the evening.

Service was excellent. I wouldn’t say it was superior pasta, but the portion and price was great. Lovely flowers for all those ladies out there!

Right on the corner of Denman, amongst a selection of world-wide cuisine is an Italian restaurant. It was bustling inside as we entered and a hostess came to greet us. We had reservations for 6pm, but she seemed to push us to the patio. I was reluctant, as it had been an extremely windy and chilly weather during the day, but with the reassurance that there was heating, we followed her outside. The patio had a covered roof with the heater, and the sides were enclosed with a clear plastic cover. 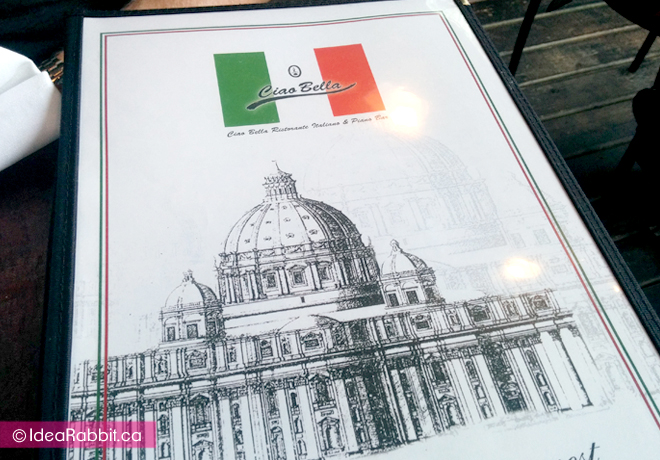 Our server checked with the table with a couple next to us first, as they were already going through the menu. He flipped around to our table and greeted us, and noticed that the course special menu wasn’t included, so he flipped around back to the other table and got one of their sheet for us. No bread came for a while, but when it finally came, it was dry, so the oil and balsamic vinegar to compensate helped a bit. I ordered the Vongole $17.95 which for the first time had no shells with the clams. Although easier to eat, the clams seems to be bits and pieces like it came out of a grinder. Although colourful, it seemed like no consideration was put in for the presentation. It was pulled out of the pot and straight onto the plate. Next~. It was quite garlicky, which I liked, but the portion seemed too much. Disappointing for a classier, more pricey Italian restaurant.

When they brought out our pasta dishes, the server made no effort in taking our empty bread basket nor the small plates used for eating the bread. Having a tiny table to start off with, we were crammed with stuff on our table. Thumbs down. Sheepie ordered the Frafalle Alla Diavlo $21.95. He didn’t seem to like it, nor did he feel too good afterwards.

The heater above us started to really grill us. It wasn’t just ‘warm’. It was literally cooking us. Luckily, this happened near the end of our dinner.

When the server asked if we wanted dessert, we declined as the large portions were quite filling. The bill came out right away.

Disclaimer: *This was a complimentary dinner. This post was not edited or written for monetary compensation, and are solely my opinions and observations. 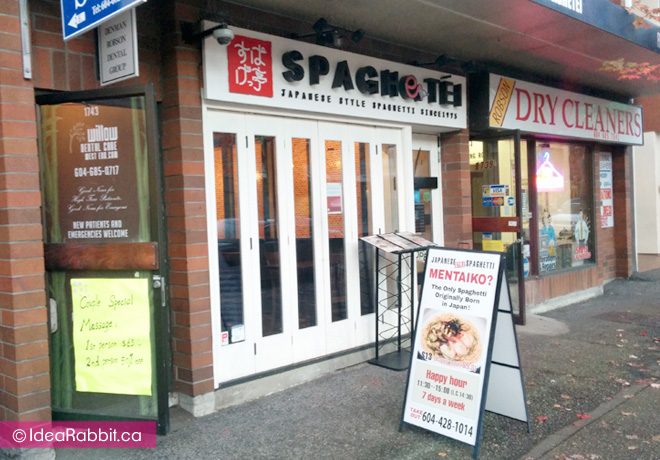 I was kindly invited by for a complimentary dinner to Spaghetei. I has seen this Japanese restaurant when they opened and had been curious to try it out. Even though it’s a small restaurant that can be easily missed, I knew of it’s location since it was one of the many locations of Benkei Ramen before.

I was there on a Monday evening. A quiet atmosphere, great for chatting up with friends as I find it difficult if the music is blasting and there is a huge crowd crammed into a place. Clean and simple decor. Although small, the space is open and airy with the tables not crammed together. 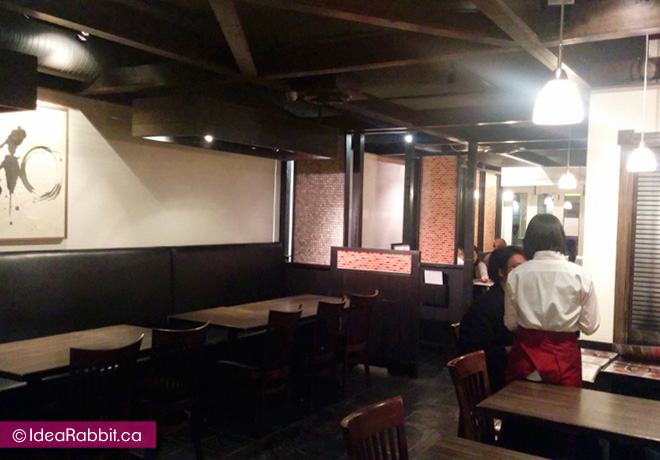 The original location is in Aomori, Japan. They’ve been open since 1975, and still going strong! That really says about the food and service – people keep coming back!

This location on Robson is the only other one outside of Japan, so we are super lucky! They have kept most of the dishes the same, but have tweaked it a bit in consideration for the local ingredients used, and thinking about the different audience here in Vancouver.

As the restaurant name suggests, their specialty is pasta. Not any kind of pasta, but spaghetti. I LOVE pasta, so I was really looking forward to trying this place out. Also, it’s rare to have authentic ‘Japanese’ style pasta here in Vancouver, so I was pretty excited. What makes it Japanese? Well, there are some flavours that are not Italian. For example, the popular Neapolitan is a ketchup-based tomato sauce that doesn’t sit on top of the pasta, but is cooked and mixed together with veggies and meats. Mentaiko is also very Japanese. I don’t recall seeing this dish when I’ve been to Italy. But that can be said for many of the variety that Spaghetei serves. 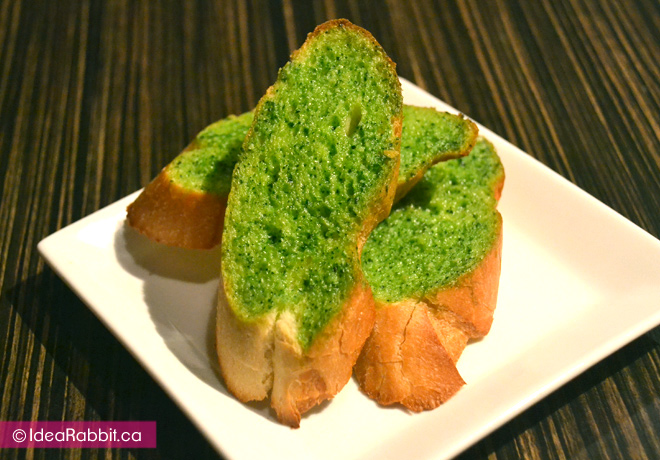 We started off with their green Garlic Bread. Wow! The colour was so beautiful!! It kind of reminded me of good-quality matcha, so in my mind, I was kind of thinking the flavour could be like matcha, but that impression was quickly brushed off as I smelled the mouth-watering smell of garlic. Mmmm… Crunchy and crisp, not too oily. 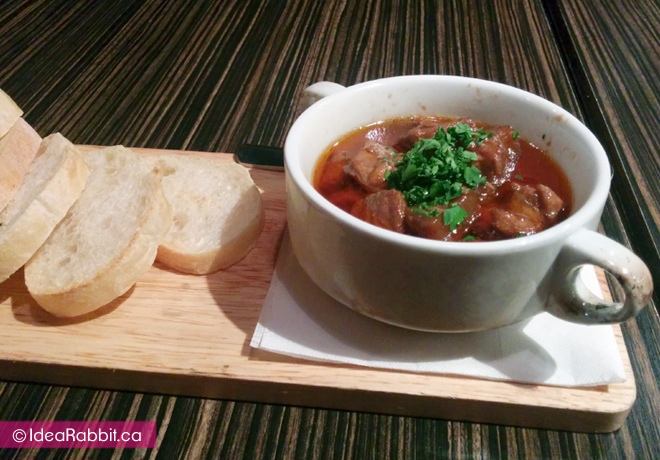 Pork Chili Oil Bread ($4.60) comes with several small slices of bread, with a small bowl of boiling oil with chopped pork and eggplant. We were talking quite a bit, so it cooled down, but it was still hot – as in spicy! The pork was super tender. It was a bit difficult to eat with the pork and all of that oil on the bread, so we mixed it in with some of the pasta dishes.

All spaghetti dishes can be ordered in large, medium/regular or small. Regular Clams $13 was the first one I tried. It’s not super oily, and subtle but rich in flavour. The addition of thinly sliced nori (dried seaweed) sprinkled on top is typical in non-saucy spaghetti dishes in Japan. The home-made ginger soy sauce was a pleasant change from the usual white wine used for clams in the traditional Italian dish of Vongole (clams). The bright red-orange tobiko (flying fish roe) was a nice accent and complemented the thinly chopped up green shiso (Japanese herb). This was my favourite one out of the three, despite thinking that I would have Mentaiko as my number one. Regular Mentaiko $13 had mushrooms, juicy shrimps, nori (dried seaweed) and shiso. Subtle flavour again, but it feels almost healthy without any thick sauce. Could have used a bit of spices to give it a bit of kick, but easily goes down. Very delicious! Small Barayaki is a unique and modern twist on spaghetti dishes. It has pan fried beef and onions with teriyaki like sauce which is apparently the traditional food of Aomori, Japan. They’ve combined it with spaghetti, and it takes great! What a great combination. My friend who accompanied me loved this one the most. I’m not a pork/meaty person, but the flavour was really good. Next came the first dessert – Matcha Powder Snow. We stared at it in awe for some time – so pretty! The shaved ice looked like coconut or literally – snow scooped up from a serene, white, mystical winter. I was expecting not much from such a simple dessert. I didn’t know it was shaved milk, so I was expecting a strong matcha powder flavour with ice. But to my surprise, the texture, the way it subtly melted in my mouth and the sweet milky flavour blew me away. It was the first time that I had anything like this. I immediately fell in love! I can just remember it so clearly as I type this and now crave for more….ahh… I’ll definitely come back here if we’re in the neighbourhood and need a dessert. For their second dessert, we had the Creme Brule. Unlike some other places where I’ve tried this dish, the crust was super thin, making it easy to crack and eat with the contrasting smooth pudding underneath. The crust wasn’t overbearing (in sweetness) nor sticky where it would get lodged onto to your molars if you chewed down on it. Overall, it wasn’t overly sweet (characteristic of Japanese desserts – which I love) with a raspberry and mint on top as bonus. Thumbs up.

The service was great and friendly – all smiling, prompt and professional. Definitely would like to return to try out more dishes – and the Powder Snow!

They have a weekday happy hour special from 11:30am to 2:30pm which offers the Double Meat Sauce, Mentaiko, Tomato Cream or Barayaki for only $9.80 and get additional discounts on your drink, salad and dessert!