The Secret
by Rhonda Byrne 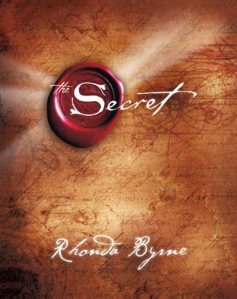 After reading ‘The Power of Now‘, which allows you to focus on your inner being, finding true joy and peace with yourself, without relying on external things to bring happiness, this book seems to sit on the other side of the fence.

This book had gained huge popularity after Oprah recommended on her show. There is a DVD of The Secret as well, which I have also watched – which might be a little more interesting than the book.

Anyhow, I agree that thinking positively is important, and you find that once one thing goes well, it kind of snowballs, into something bigger. This is also the same for negative attraction as well.

However, after being shown ‘enlightenment’ from The Power of Now, the question of whether all that money, wealth, success in job, etc will bring you true happiness comes to mind. This is totally contradicting the idea that one must love yourself truly first- that it all starts with YOU, or you will never be satisfied with anything you acquire because there will always be a sense that something is missing from your life.

In The Power of Now and some other books, it talks about how we have become controlled by our minds – which is hurting us in negative ways since many of us has become blind to the situation. The Secret however is talking about how the mind is powerful (which it indeed is) and will get you anything you want by projecting images of things you want (in the future – again contradicting to The Power of Now which says to focus only on the now).

I don’t agree with everything they say.  Like for those wanting to lose weight, the fact that it states “food is not responsible for putting on weight.” but the thought of food making us gain weight sounds alittle absurd. Although I’d seen a study where they had participants believe and convince themselves that they were losing weight, where at the end of the study, the participants did lose some pounds. However, they were eating a healthy, balanced diet. This statement that the author writes several times that you can eat whatever you want is a little ridiculous. Sure, some people have body types that may not gain weight even if they ate junk food, but they’d start seeing problems elsewhere in their body.

The book mostly tells you that the Universe is created by you, and you have the control. Just ask, believe, and receive whatever you want from the ‘catalog of the universe’ and you will get it. This is going beyond ‘positive-thinking’ and getting into wishful and magical thinking. It feels like a really enthusiastic sales person trying to sell you something, but the way he says it, makes you feel like you can’t fully trust him. Still, with all the negative things that have been happening in my life, I was ready to give it a try. I completely agree on the positive-thinking, and being thankful for everything you have now. There are some good points. I think it’s just written poorly. Like I said, it sounds like a really bad infomercial.

I have seen other reviews on this book, and they either love it with 5 stars, or hate it with 1 star. Whichever side you may be on the review, be happy