My co-worker and I were in the neighbourhood on a project and decided to dine at ABC Country restaurant. As soon as we we walked in, it felt different from the Vancouver atmosphere. I’m not sure if it’s because of the location…or it was just a gloomier atmosphere. It air and interior felt like I was back in a restaurant in Calgary (not that I’m saying it’s a bad thing). My co-worker also spent some time in Calgary as well, so he knew the feeling too.

I’m not sure why I ordered something so boring. Maybe it was the prices that deterred usand we weren’t all that hungry so we both ordered the Two Eggs any style. I had the eggs poached and  with diced hash browns and fluffy pancakes. For what it was, how it was presented, and the quality of the food, it was overpriced even though we had chosen one of the cheapest dishes. 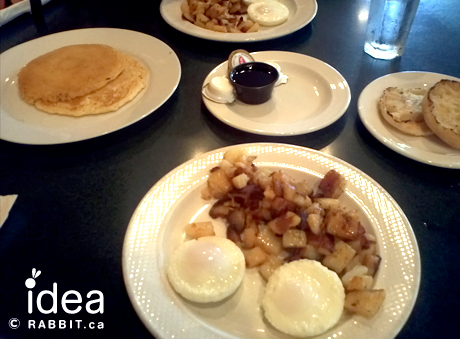 It wasn’t too appetizing and it felt like it should be those cheap morning breakfast on the corner for $3.99 or something.

I thought we’d never come back, and sure enough, it closed down. Two others have closed down and the ones which are still running have really terrible ratings. ABC better change, or they’ll be completely out of business very soon.

They do however, have a very cool website.
http://www.abccountry.ca/