Last summer, they had a grand opening at their new location on Hastings. We returned with a group of 15 people for the Christmas holidays. The lady there who I have seen for many years at the old location was still there and was serving us. 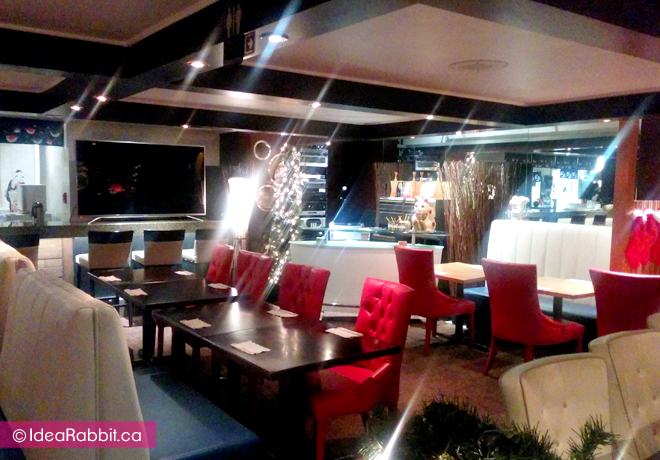 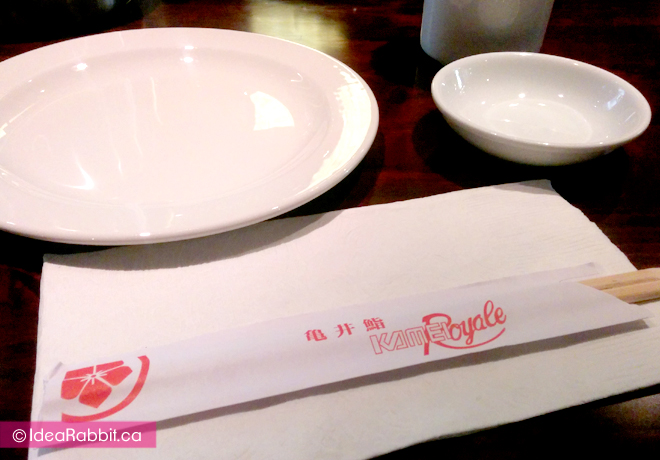 The restaurant now had a modern feel but with traditional Japanese decor. Their tatami rooms that they had all along the walls of the old place were no longer incorporated, instead had chic like bar seats, modern slick booths or tables with chairs. 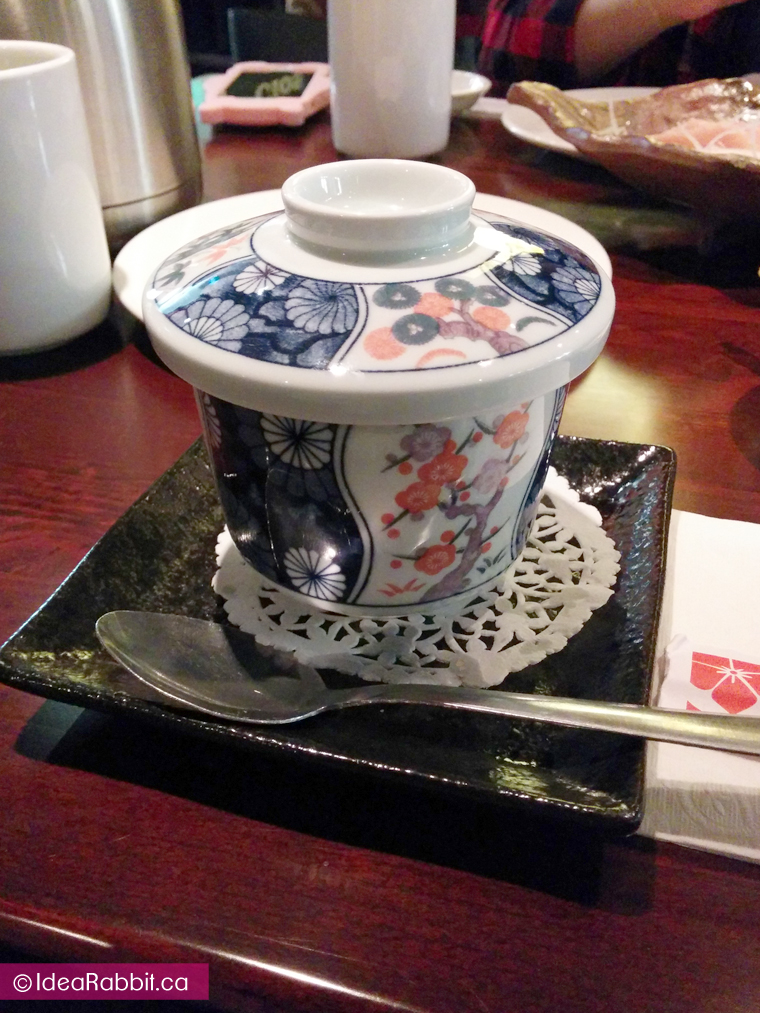 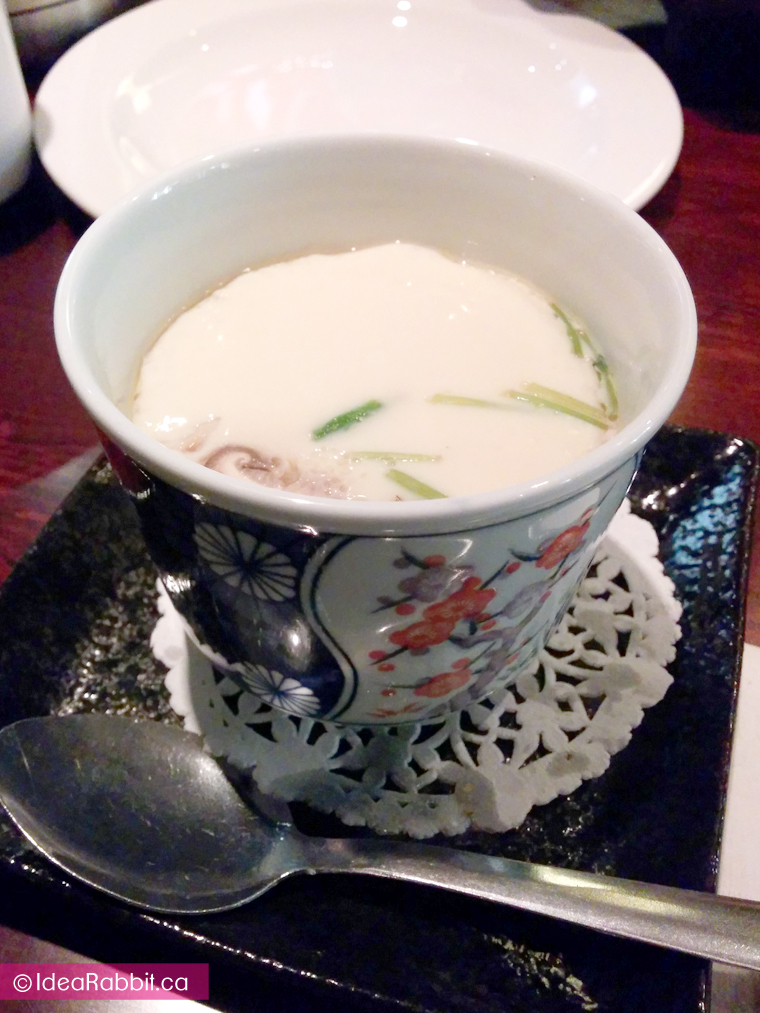 I ordered a Chawanmushi $5.95 with prawn and vegetables in steamed egg custard. It was really fluffy and served in the traditional dishware, it always reminds me of Japan. It’s rare to find a good chawanmushi, let alone any restaurants serving them in the first place. Yakitori $5.50 for two skewers of grilled chicken with traditional BBQ sauce. Really good. Would have liked more of the charcoal-y taste though. I also had a Salmon Nigiri $3 and Tamago Nigiri $2.75. Now I don’t like huge pieces of nigiri, especially with a ton of rice to cheap out, but this was ridiculous. There were barely any rice underneath. I also got confused on the menu because the nigiri were under ‘Sushi’. Yes, sushi is the broad category. Everything with fish and rice together is sushi. Nigiri-sushi is the one with the fish on top and rice underneath. Maki-sushi is the classic rolls with the seaweed on the outside. Oshi-sushi is sushi the ingredients pressed usually into a box shaped mold. I’ve never seen it categorized like this anywhere else, so I was a bit perplexed. But maybe that’s just me.

Others ordered what looked to be some amazing dishes, and they seemed to enjoy it. 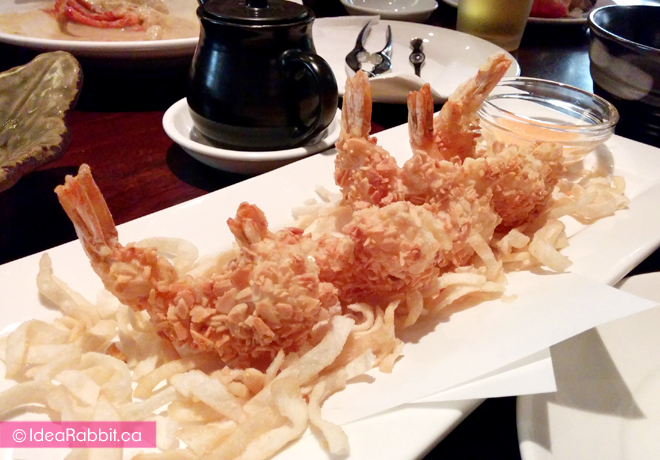 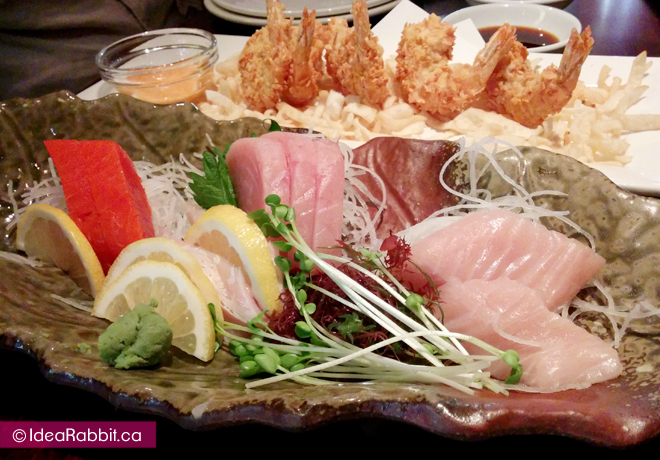 Service was pretty good. The server allowed us to take one booth just for jackets and bags as it was winter time, and a lot of people had bulky things. The price is higher, but it’s always been high for Kamei Royale. Quality is always good though. I might have mentioned this in the previous post for the old location. If you have a guest from out of town and want to take them to a Japanese restaurant, this is the ‘safest’ place to go, meaning you will get consistent good service, food and atmosphere. 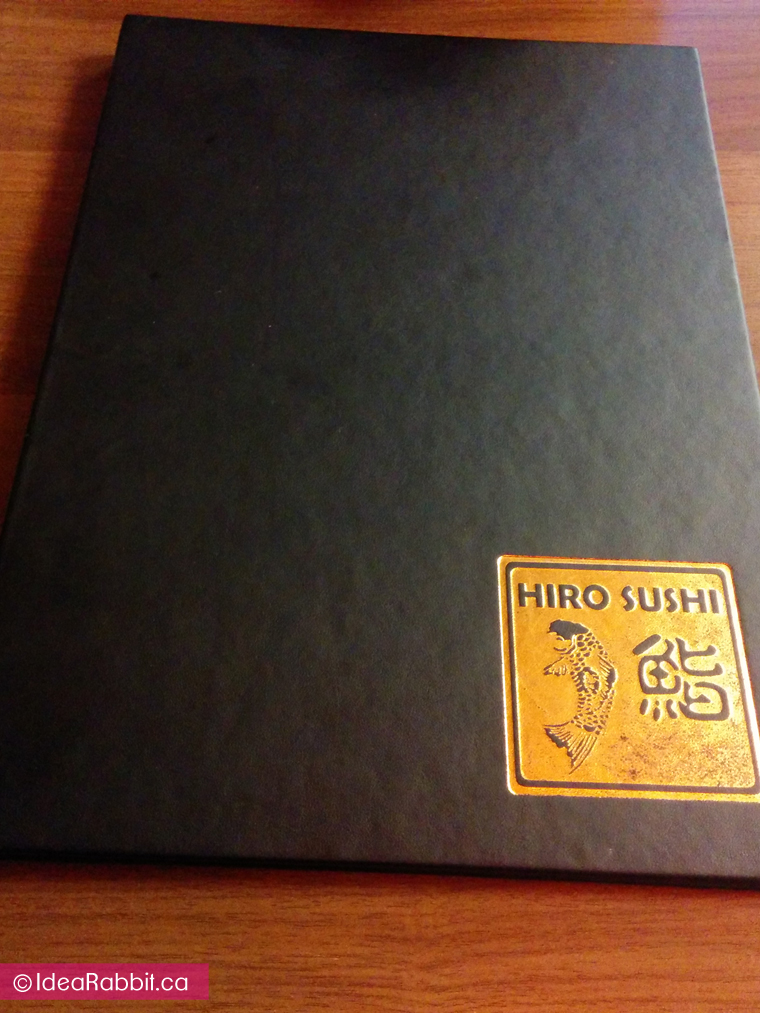 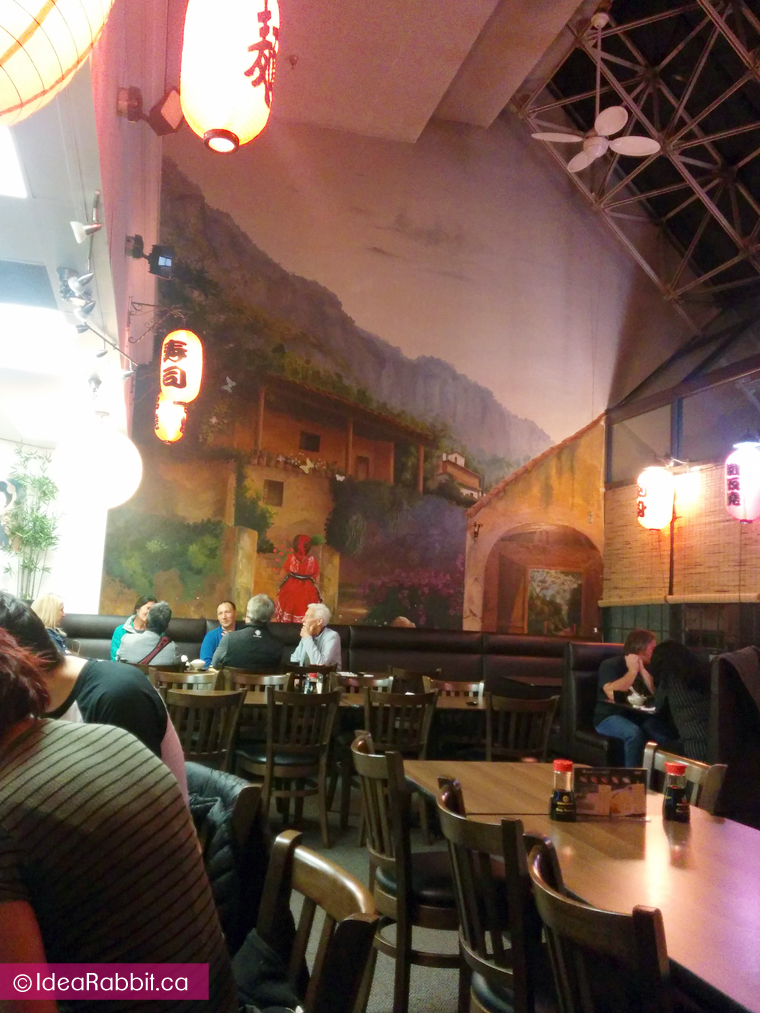 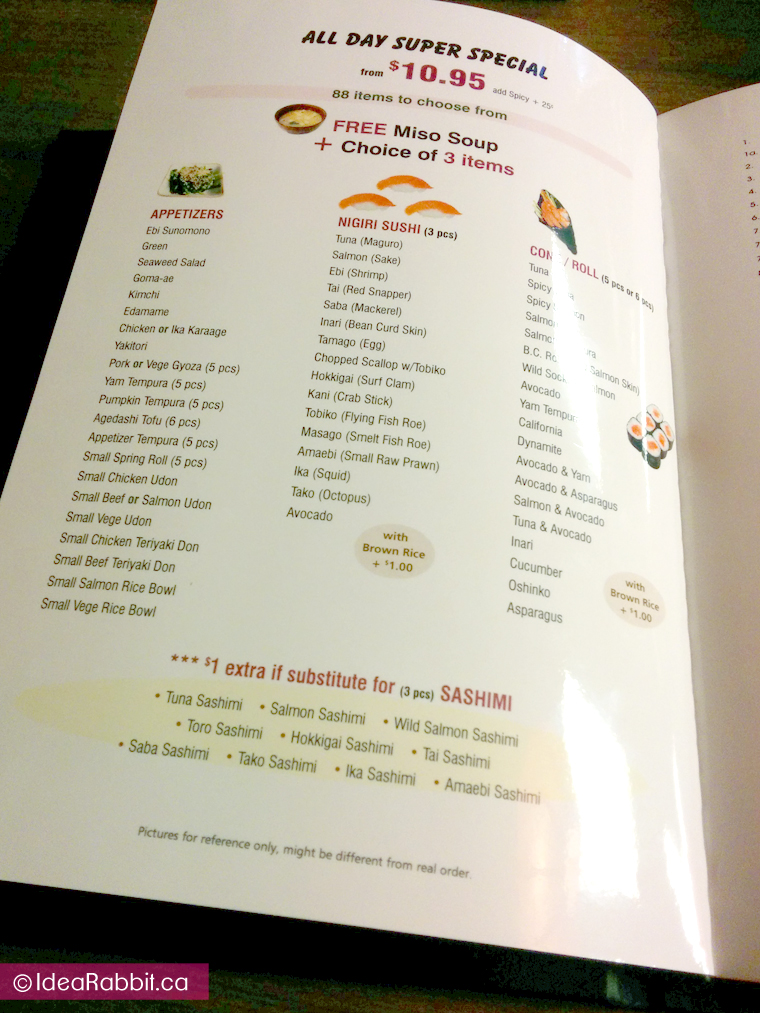 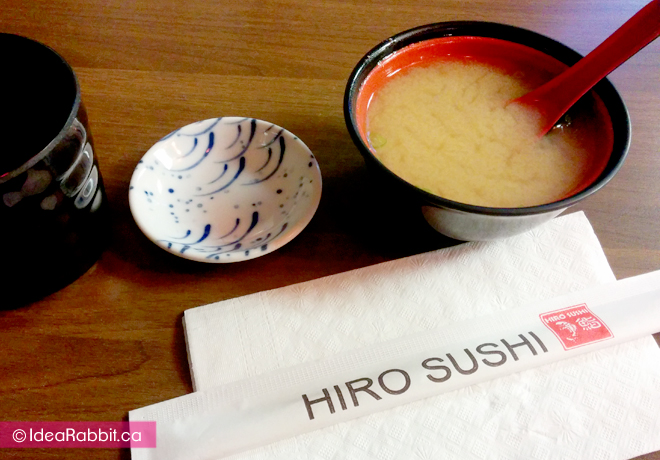 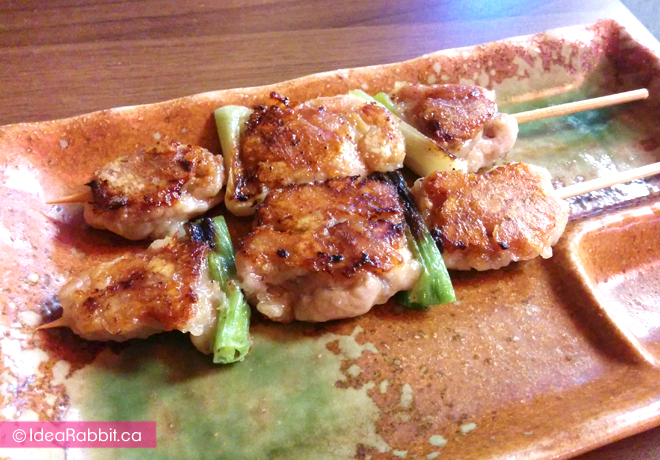 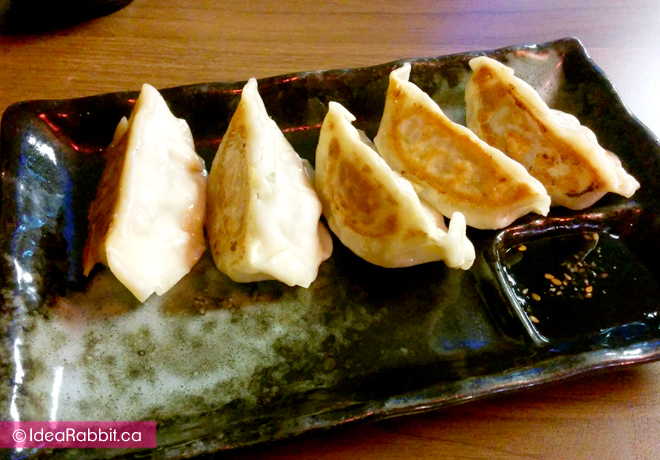 After all these years (over a decade) in Vancouver, I don’t know how I could have missed this place! Kibune Sushi opened its doors at this original location on Canada Day, July 1st 1982!

Even when I was walking towards the entrance, it gave me a feeling of home… some little sushi place in the neighbourhood where I grew up as a child. The round window by the entrance added a nice touch.When I stepped in, it was even more nostalgic. It felt authentic. Mmmmm… the smell. The atmosphere. The detail of the roof inside the restaurant was interesting. The semi-private rooms with the walls separating each of the tables on one side was nice. Though the tatami were a bit stained… 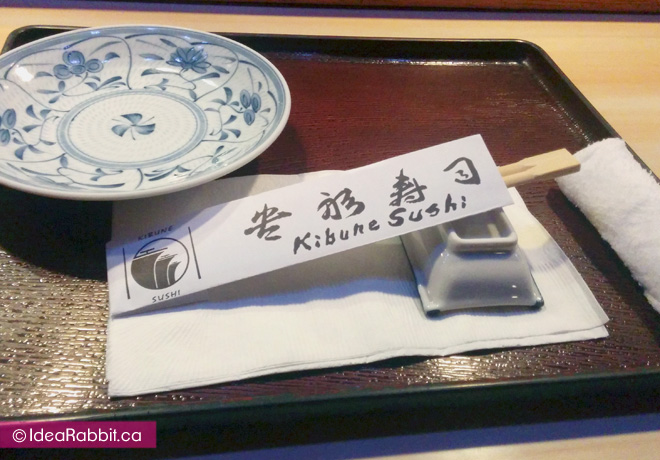 They are really busy, so make a reservation if you plan on dining there. Sheepie and I were lucky, and got to sat at the counter. There, the trays were already set and we got our warm hand towels. I ordered the Negitoro Maki $5.50. It was really good. I could taste a hint of vinegar in the rice – which you will find in authentic, good sushi restaurants. They didn’t cheap out by having the underside (when you flipped the roll piece) half empty with rice and filling. They were all filled to the end. In fact, in a real sushi restaurant, they would never serve the ends of a roll to a customer. New York Maki (since 1982) $5.50. Lots of rice and the fresh green sprouts were a nice touch. Nothing spectacular, and a bit too large for eating without bulging like a chipmunk, or rice and fillings falling apart as you bite in the middle. 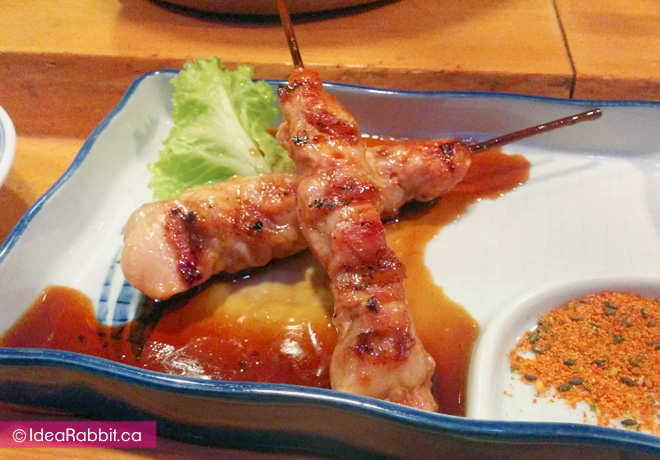 I also had the Yakitori $6 for 2 skewers.Tasty sauce (with a side of hot chiili powders – which aren’t really hot at all), and soft juicy chicken. Sheepie ordered the Assorted Sushi $17 which came served on a boat. The boat wasn’t anything we haven’t seen elsewhere, but the presentation was really good and the ingredients seemed really fresh. Sheepie always checks under the ‘neta’ (the top raw fish, though) to see if there are wasabi on the rice (or on the neta). If there is, that usually indicates an authentic nigiri. There were. But I can understand why chefs here in North America has decided to take them out as not everyone likes wasabi, and it’s hard to take it out once it’s in there. I had his salmon nigiri and it was pretty good.

The food and service was really good. Is on the pricier side for sushi without the eleborate, high end look of some restaurants like Miku, but it’s definitely more authentic or rather, traditional. They don’t use MSG and they spend a great deal of time preparing their soup.

If you want to travel to Japan, but don’t have the time nor money, try out Kibune for some real Japanese sushi experience. Make sure to call in to make reservations – they are popular and full!