To celebrate my birthday, I held my dinner at the Teahouse in Stanley Park. I kept on looking at the weather forecast and was really disappointed in seeing that it was going to be raining. But as it turned out, it was sunny, allowing nice, warm natural light through the windows into the interior. The inside has a touch of romantic European feel. The patio is nice when the weather is nice. But since we had 15 people to seat, we were inside. We were there from 5:30pm-8:30pm on Sunday. Parking up front is $3.75 an hour. Yeah…it’s best if you can car pool. A couple walked from English Bay – about 25 minutes – it’s a nice walk on a good day. Or you can bike – though that limits your attire unless you bring something to change into. Design or quality into the menu lacks a bit for a higher end restaurant. 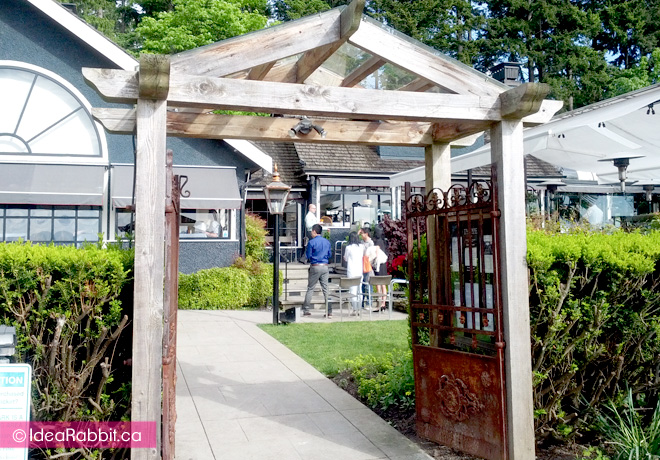 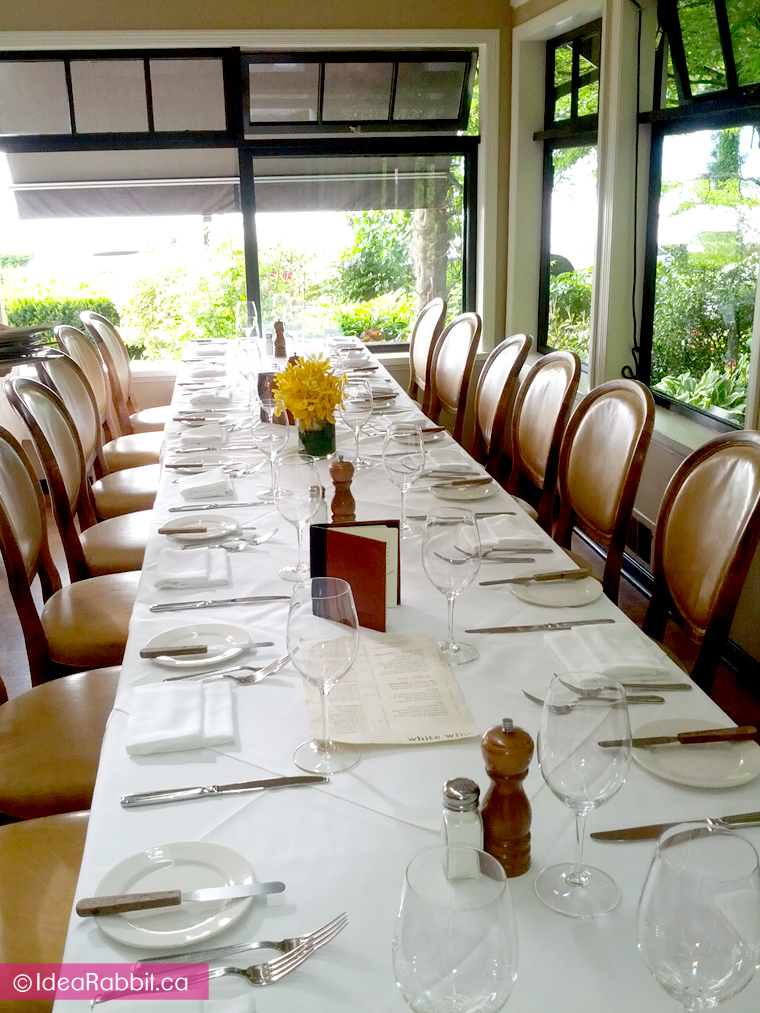 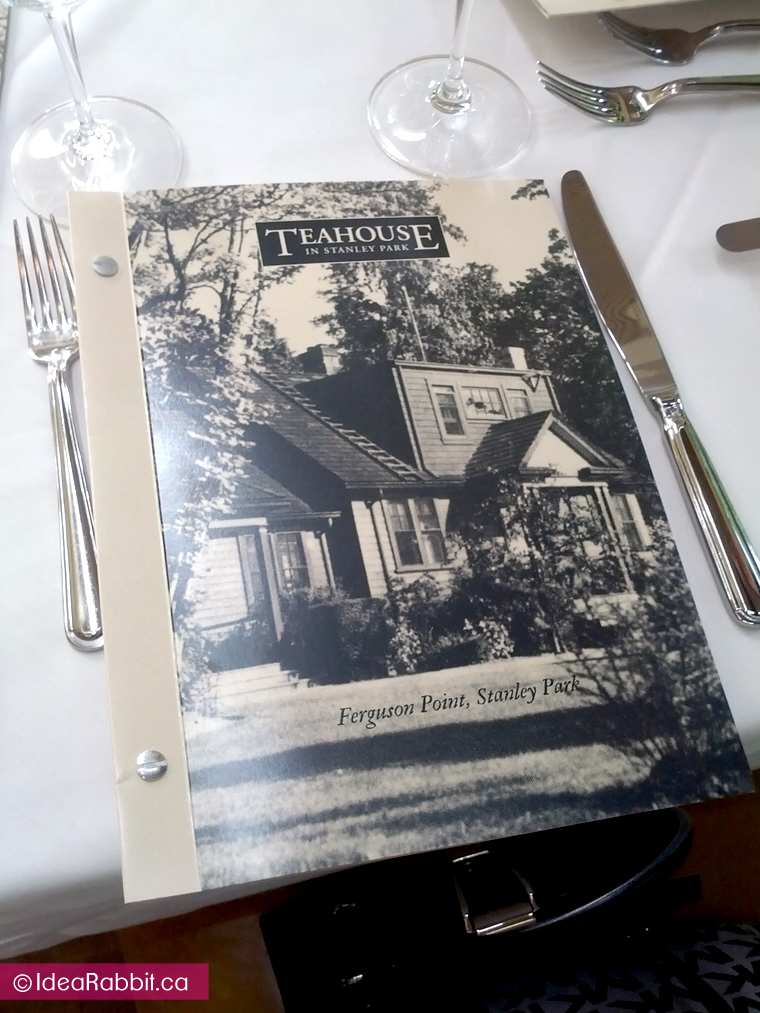 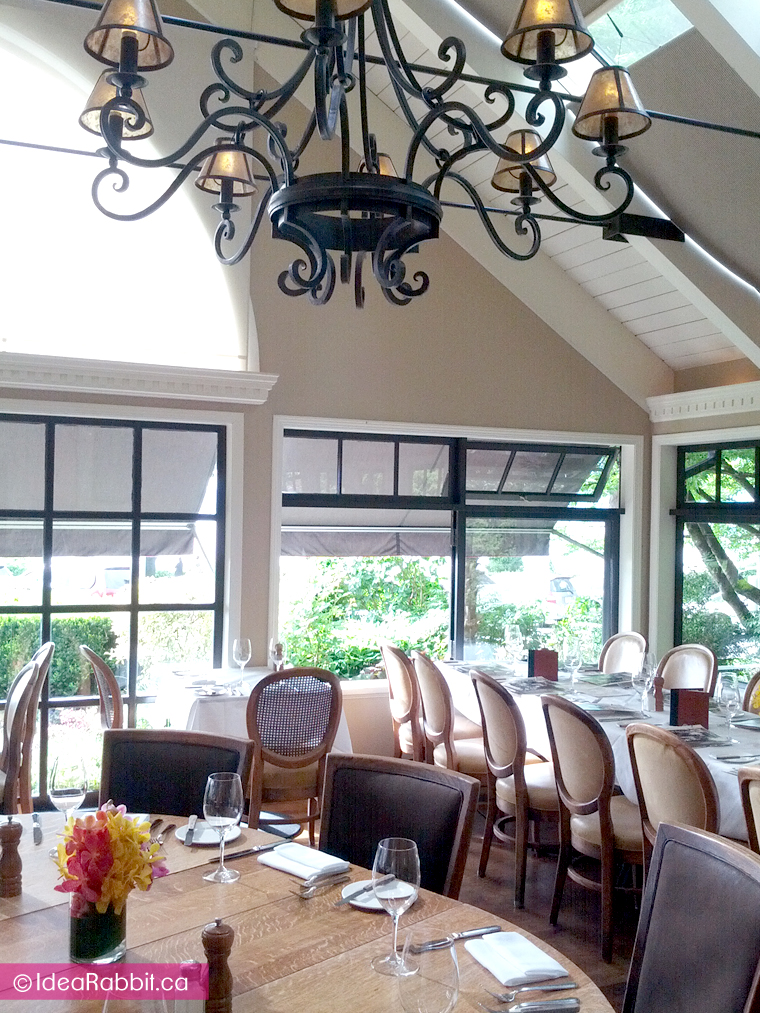 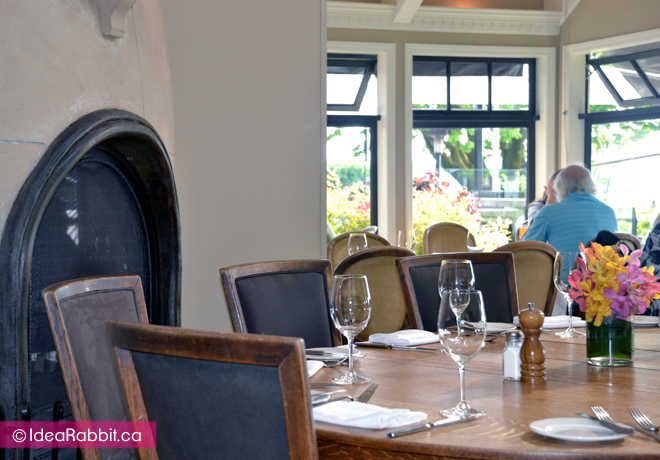 The servers were friendly and patient with the big group. The young busser may need a bit more training as he tried to take my dinner away when I still had my fork and knife on opposite sides of the plate, and I was clearly not done. He also brought me my dessert spoon which they forgot to give me in the first place. He rushed off and came back to hand it directly in my hand. Not sure what the right protocol is in a high-end restaurant, but I thought it would be more appropriate to set it down on the table next to the dessert. Minor stuff though.
I ordered the special soup of day – Lobster Bisque $10. I thought it was pretty good, but my friend who was really into Lobster Bisques was a bit disappointed. 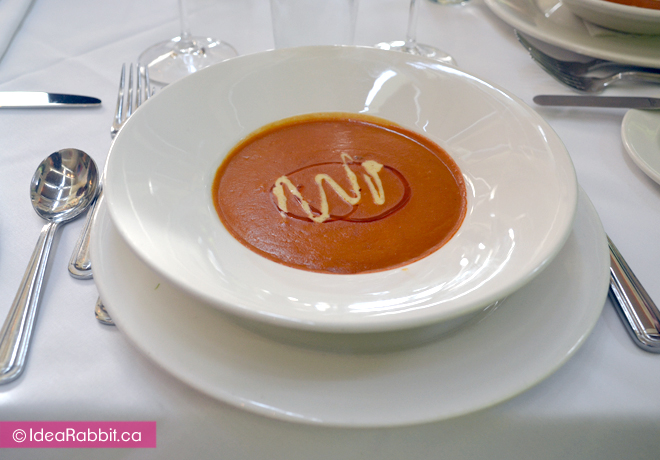 I was busy talking to everyone that I didn’t end up eating a slice of the complimentary bread until everyone else had finished theirs. That was fine as I didn’t find anything extraordinary about them.
For my main, I had Fresh Haida Gwaii Halibut $32 with lemon caper beurre blanc. I was quite surprised at the portion of the dish. It was nicely done and presented. It was soft and tasty, but a bit too heavy on butter… I was expecting much smaller and was quite filling. I’m glad I didn’t eat too much of the complimentary bread! I was also pleasantly surprised at others’ dishes as well for their portion. 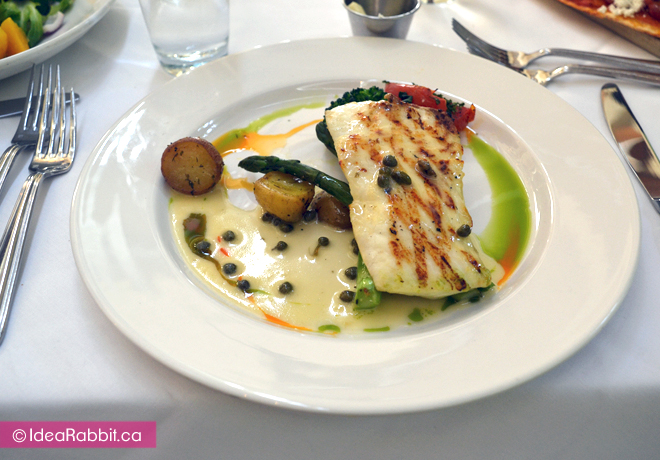 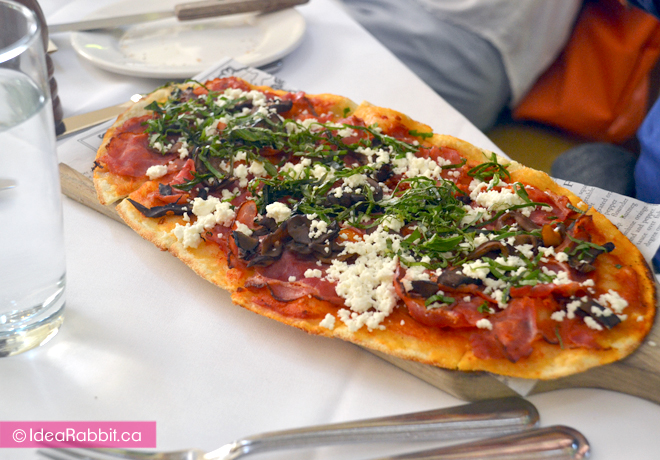 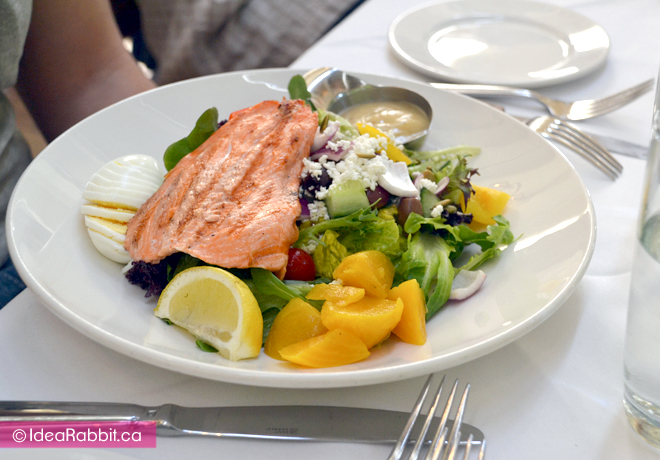 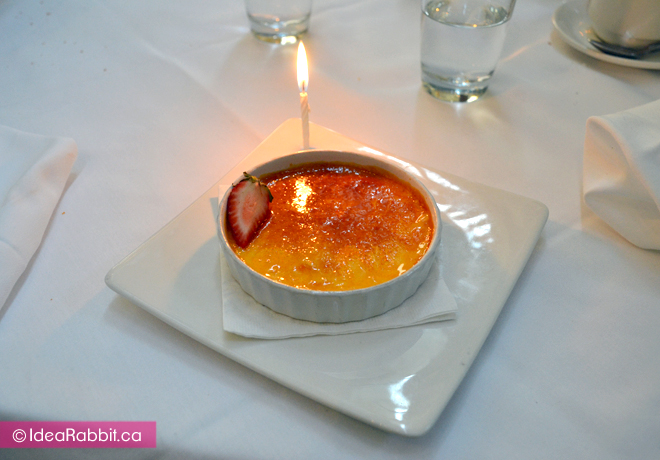 For dessert, I had the Creme Brulee $9 – with a candle

. It was smooth, and light with the crust being thinner than other places.

My friend who was disappointed in the Lobster Bisque mentioned that since it was called ‘Teahouse’ and being a fine-dining restaurant, he tried out their ‘regular’ tea. He was very disappointed to find that it was a pot of Red Rose tea. He’s quite a picky eater, especially with coffee and tea – being a Creative Director of Blenz explains why…lol. But I think I would also be disappointed in getting a cheap Red Rose there. He was fortunately, satisfied with the Flatbread. I had a slice and it was thin, crispy and tasty. A big strong on the goat cheese, but if you’re used to it, I guess it wont bother you too much.

The ambiance is lovely, the food is satisfactory and the location is great for taking photos before and after on a sunny summer day. There was another table that was really close to use, making it a bit of traffic hazard for the servers and my group as people walked around to talk to others. Ok, so it’s not suppose to be a bar where people mingle, but it was a special occasion. Sorry Teahouse staff! I hope we weren’t too much trouble

I’d recommend Teahouse! It would be a nice place to take my parents next time

(for the ratings under ‘location’, I give it 4 carrots because it’s in a lovely area. However, I often consider how accessible it is in the location as well. For accessibility, I give it 2 carrots, since there are no public transit that goes there. As mentioned in the blog, it takes 20-30 minute walk from English bay area. Parking is quite expensive.)

Sheepie and I had brunch at the Teahouse. This time, we were on the opposite side of the restaurant than last time in the almost green-house like portion. It was quite chilly with the windows opened, so we closed the ones that were nearby. (I did end up catching a cold, but I think it was the combination of flying back from Europe, jet-lagged and being chilled). 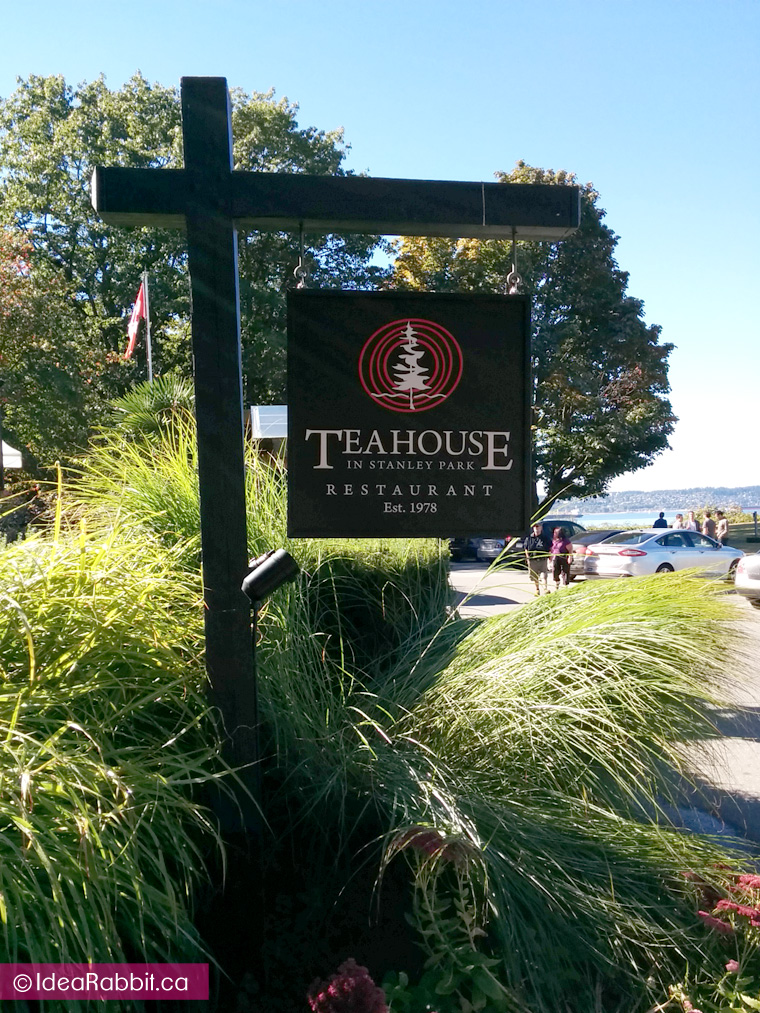 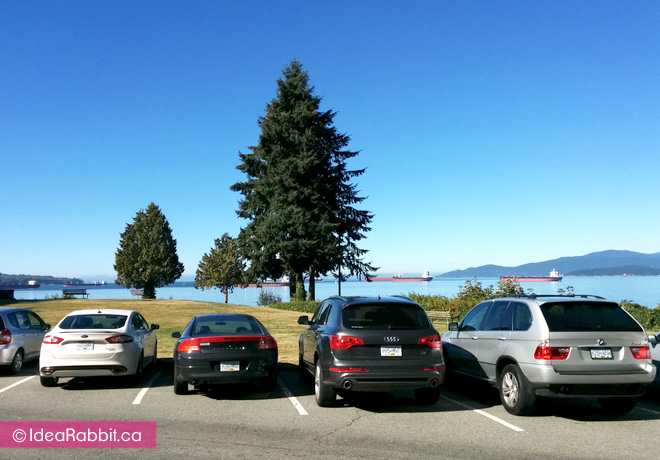 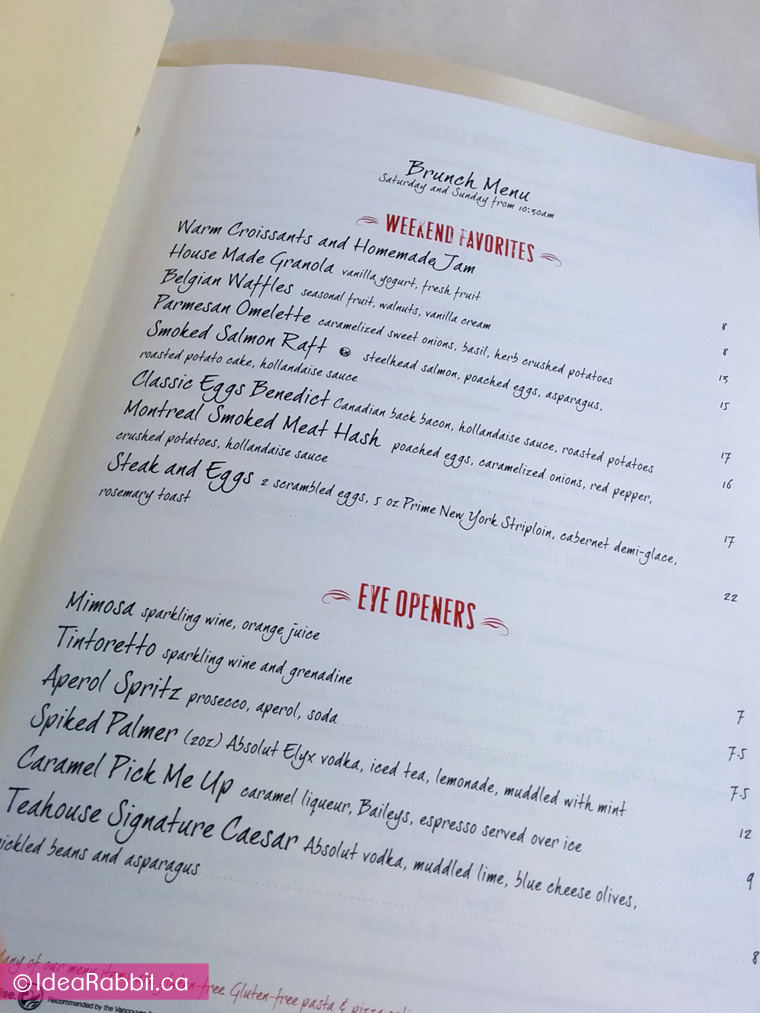 It was a beautiful day, and the nice big windows (as long as not opened, lol) were very nice to see the scenery outside. The tables were covered with white linen, but the top square part had a thin paper, almost like tracing paper which made it look tacky. Why was it there? To prevent the white cloth from becoming dirty? Perhaps, but it just seemed so out of place. 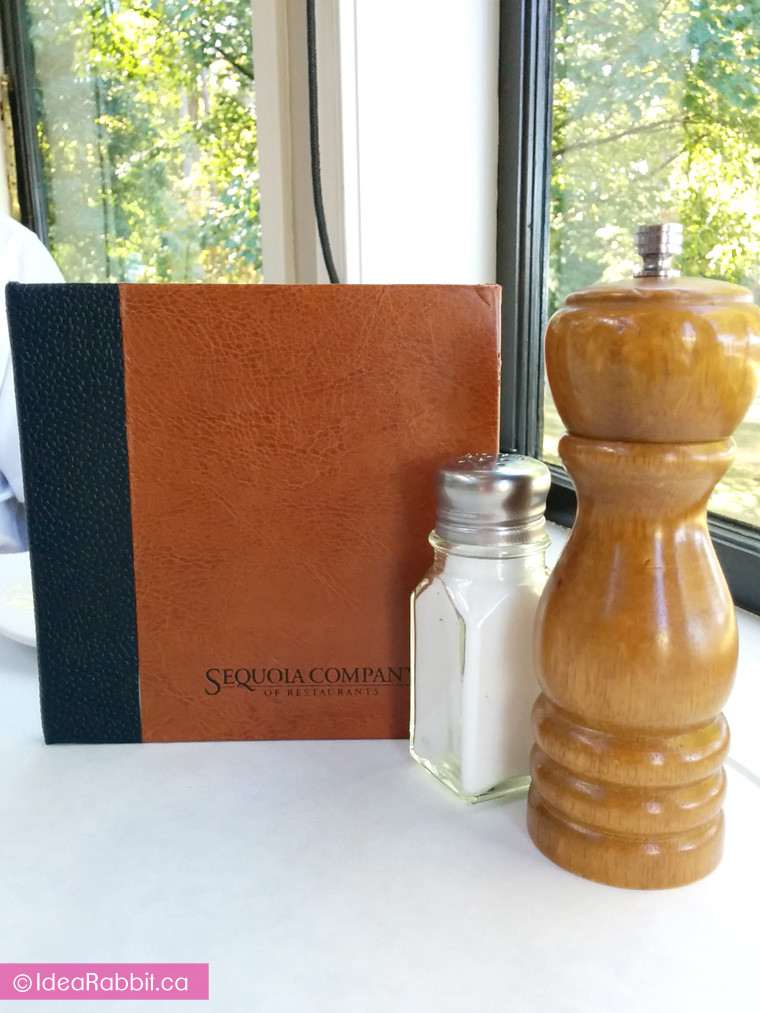 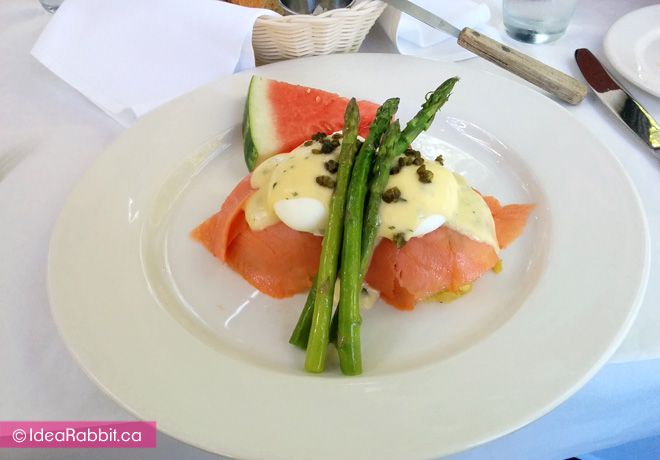 I ordered the Smoked Salmon Raft $17 with steel-head salmon, poached eggs, asparagus, roasted potato cake, hollandaise sauce and a slice of watermelon. I just looooove this benedict like dish! So yummy!!! Sheepie on the other hand got a burger and fries. Seriously? At the Teahouse? lol.
Our server was very friendly with a staff he seemed to be training in his shadows.
It was again, another nice dining experience with great atmosphere and service.