So for my birthday, I wanted to host it originally at Mosaic Grille since I liked the restaurant when I went there before with Sheepie. Unfortunately, they only had a 3 course menu for $52 + 18% gratuity + tax per person for large groups. I didn’t want the restriction on the menu and the cost per person (I wanted choices!), so reluctantly, I declined and searched elsewhere. I usually pick places that I’ve been to, but for this occasion, I happened to come across Arc through online reviews. It looked really nice and had pretty good reviews.
When I phoned up, the gentleman told me that they were already booked that evening for 7pm, so they only had 5pm or after 8pm. After having to change the venue, I didn’t also want to start changing the time on everyone, so I declined. However, he was persistent, and told me that they can work something out. They seem to also do set menus for large groups, but he was also selling me on the fact that they would also be able to do a la carte, though with the other groups reserved, it may take some time for the food to come out. I was sold by his enthusiasm and accepted.
We had the tables by the back of the restaurant which was nice since we had more privacy, and was away from the live music. My friend loved the singer/pianist, but it was a bit loud and made it difficult to hear our conversations, so the distance was good. 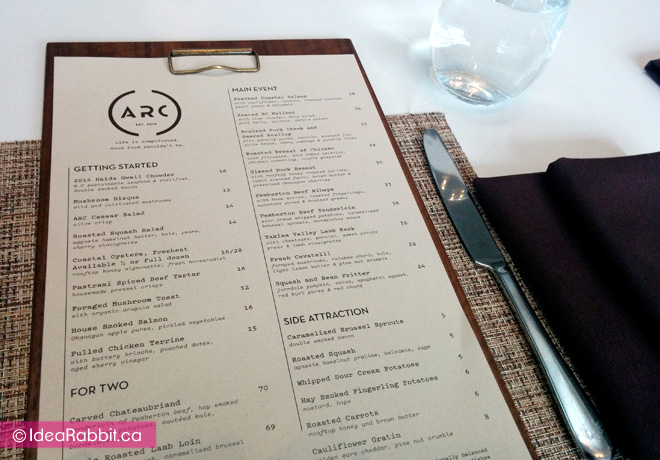 The restaurant had great high ceilings and high-end decor. The ground to ceiling glass all along one side let natural light in, and the view of Canada Place and the waters was really nice and romantic. Seating and tables were comfortable. Staff were professional and courteous. Our server Arvin was excellent. My friends also complimented that the service was very good. It was interesting to see so many babies at the restaurant. Not only did my party have a baby, but the two other table close by also had each had babies. All of them were well behaved. 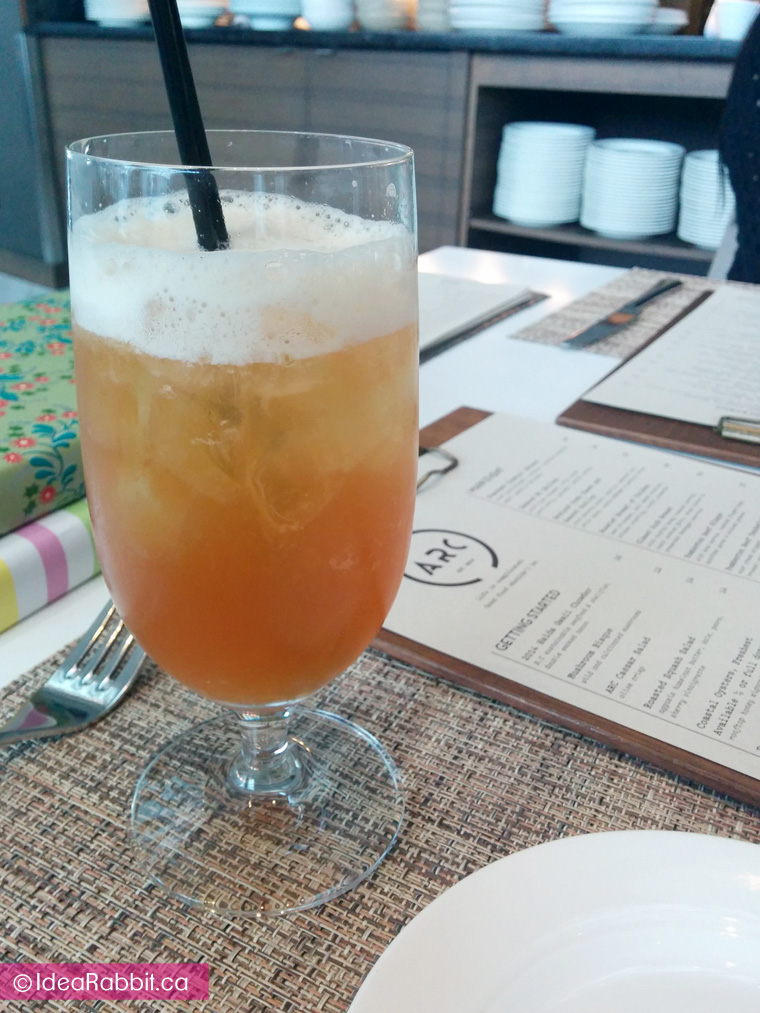 For drink, I ordered the Ginger Iced Tea, after seeing one of my friend order one, I was drawn in. I didn’t know until my bill came later that this non-alcoholic drink was a whopping $9! I know this is a high-end restaurant, but 9 bucks for ginger ale and ice tea? I thought that was way overpriced. 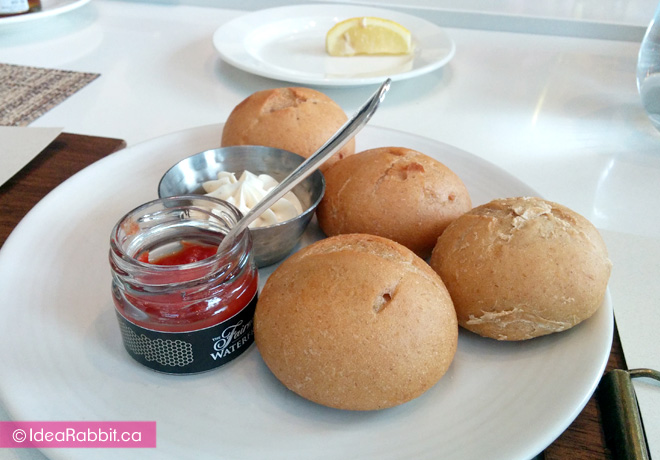 Complimentary buns were served with whipped butter and tomato jam. The buns were warm and nice bite-sized. I had it with the garlic butter and it was delicious. Arvin was very generous with the bread so with had more than enough for the table. One girl said she really liked them so she had 3. I think I had 3 too…lol. 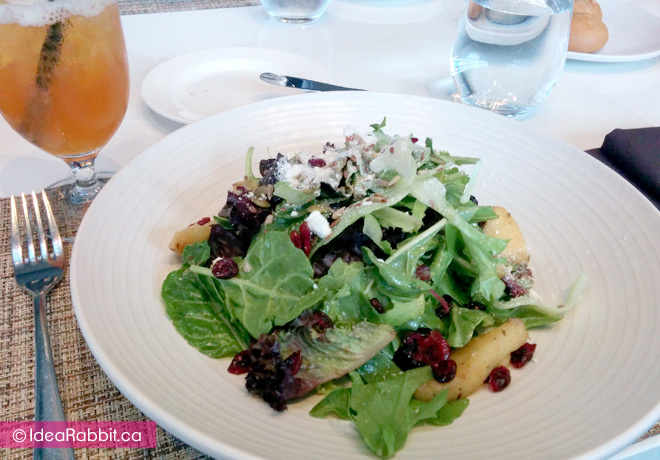 I ordered a Green Salad $12 (which was not on the menu), but our server mentioned it, so I had one. As the name implies, it was full of greens. It has some mozzarella slices with sunflower seeds, but it lacked the flavours that I usually expect from salads. It was a bit too plain for me, and wished I had ordered a different salad from the menu. However, it was a good portion. 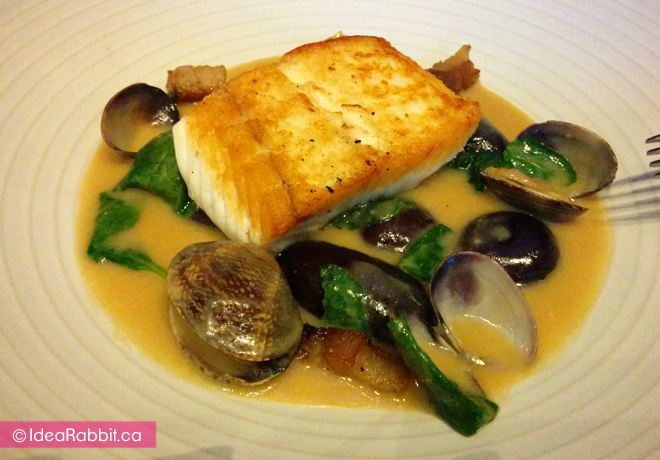 For my main course, I had the Seared BC Halibut $36 with clam chowder, kelp, pork belly, spinach and purple potato. Overall, it was too salty for me which made eating a bit difficult. I almost wanted some long rice or veggies along the side to dilute the saltiness. The pork belly were small bits like bacon bits. There were about 4-6 clam chowder. I have never had purple potato – more like black actually, but tasted pretty much like other small potatoes. Presentation was very good, and the portion was pretty decent.

Comments from others:
Mushroom Bisque $12: “Huge! Tastes delicious.”
Caramelized Brussel Sprouts $5: “Really good.” I thought for $5, it was a pretty large dish. A great deal.
Poached Coastal Salmon $28: “Very good.”
Braised Pork Cheek and Seared Scallop: “Good.”
Glazed Duck Breast $30: “It was soooooo good.” “Very good.” “it was ok, it was too raw when I asked for medium, so I had it taken back to the kitchen to be cooked a bit more.”
Pemberton Beef Ribeye: $33 “Delicious. Good portion, surprisingly large. The second piece was too rare, so I had it cooked again.” Another girl was really interested in her dish and seemed like she’d wished she had ordered the Ribeye.
Pemberton Beef Tenderloin $36: “Yes, it was pretty good.”

Overall, the atmosphere and service was superb. Presentation and portions of the food was surprisingly generous. Taste for the salad and fish was not as ‘wow’ as the rest, but I was kind of distracted most of the time talking to everyone. I was however, quite full at the end and didn’t even have room for dessert. Others really liked the restaurant too. A bit pricey for most of us, so it was a nice occasion to try out the restaurant together and to celebrate my birthday.