For our company’s Christmas dinner, we decided to dine at Trattoria. Hearing that many other companies were also hosting their dinners there, we were excited for our dinner experience.

We made reservations and arrived around 5:30pm. The table was set very nicely with menus, glasses and cutlery wrapped in red-checkered napkins. 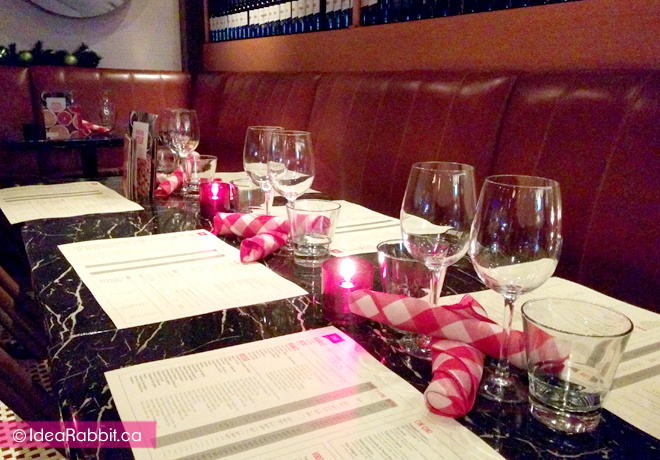 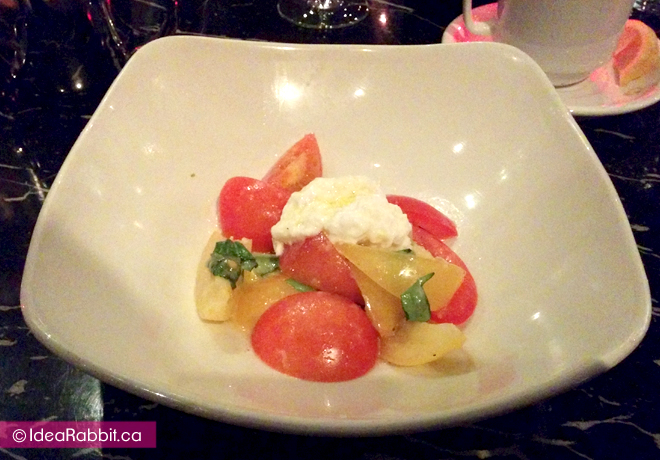 For appetizer, Sheepie and I shared the Caprese $13.95. Surprisingly, our dishes came out already separated on two huge bowls. Mine were with sliced red tomatoes, while Sheepie’s was mostly yellow tomatoes. We were kind of puzzled with how the burrata looked. Taste wise, it was pretty good, but was slightly disappointed that it wasn’t in it’s traditional form. The texture of the sliced burrata, tomato and sandwiching some basil leaves in between was something I was looking forward to. The three colours of red, white and green is supposed to resemble the colours of the Italian flag, and usually, this dish jumps out at me because of the vibrant colours. 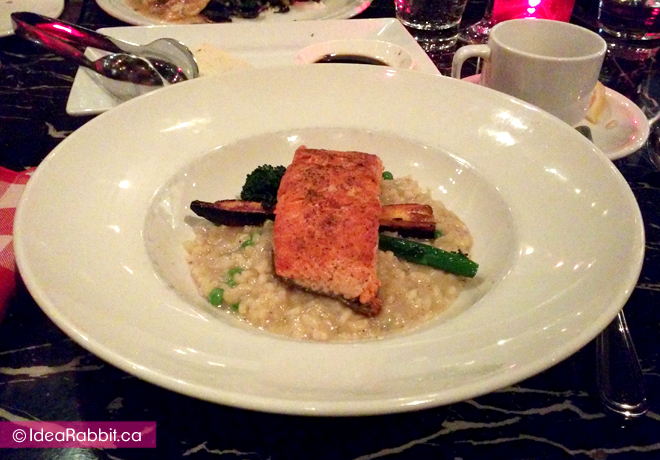 For my entree, I had the Wild Salmon $24.95 with sweet pea risotto, lemon beurre blanc and seasonal vegetables. The salmon was well done, maybe slightly dry, but was pretty good. I’m not sure why I like congee, but not so much when it comes to risotto. When it comes to western rice, I prefer them to be very dry. But maybe it did compliment the salmon. 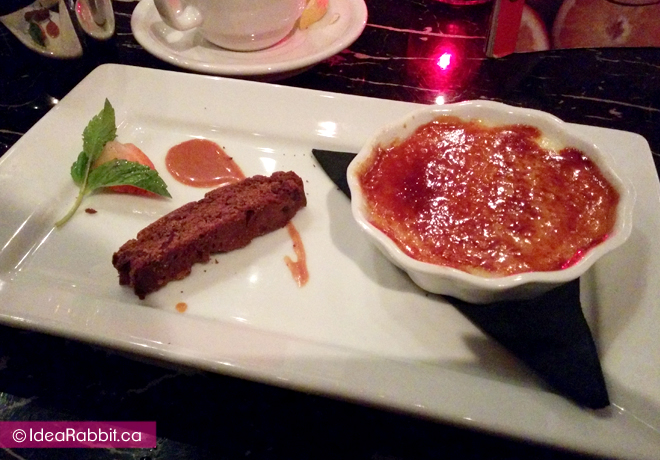 For dessert, I had the Vanilla Crème Brûlée $8.95 with seasonal fruits (meaning a tiny slice of strawberry and mint leaves) and gluten free chocolate cookies (actually, only one piece). 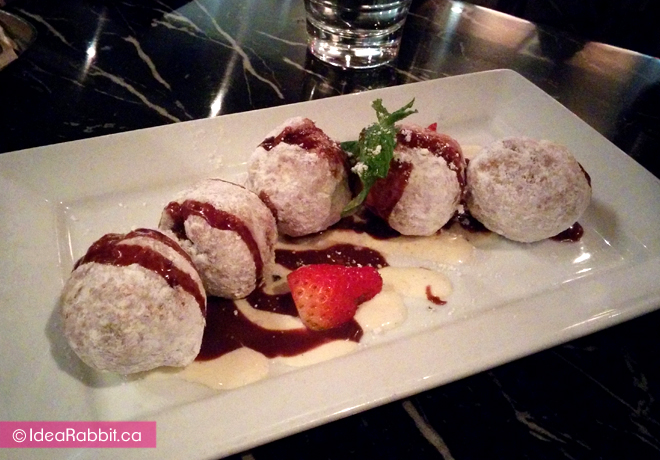 Sheepie had the Zeppole al Cioccolato $8.95 which were five Italian-style donuts with chocolate gianduja and vanilla creme angalise. It reminded Sheepie of Timbits, but of a fancier and larger version with chocolate filling.

Service was excellent even with the busy, but cozy atmosphere.

We were in the neighbourhood, so we decided to check out the cafe. I had actually been invited to their grand opening at their Granville location, but I was too busy at the time to attend. So it was nice to finally be able to check them out. 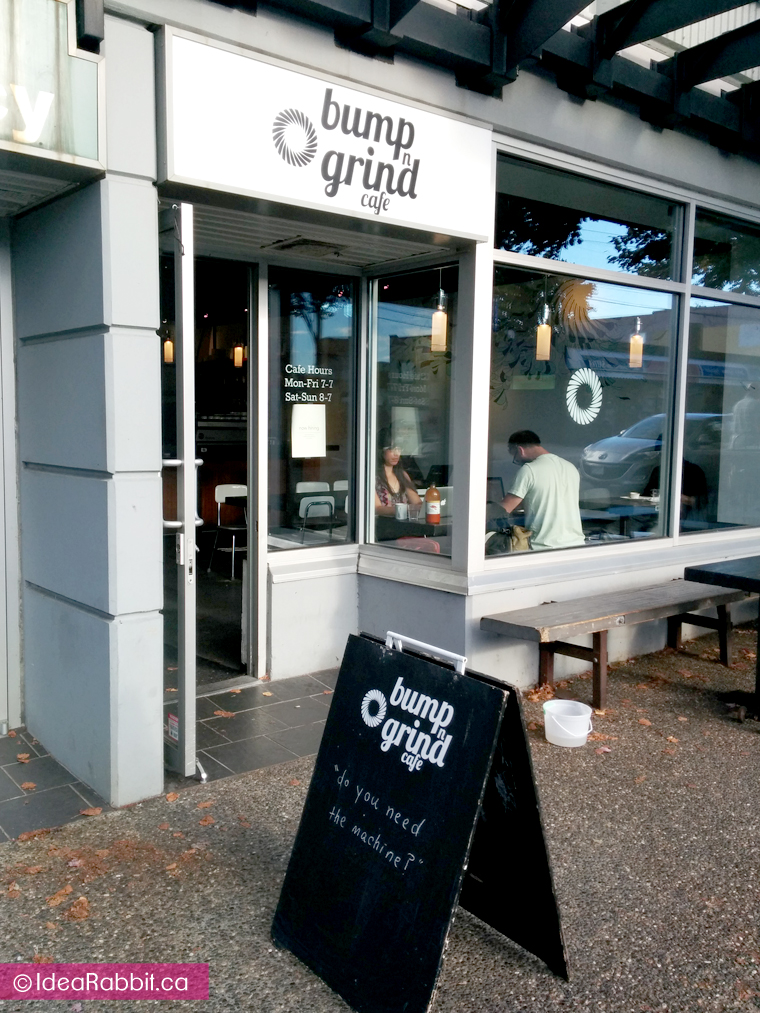 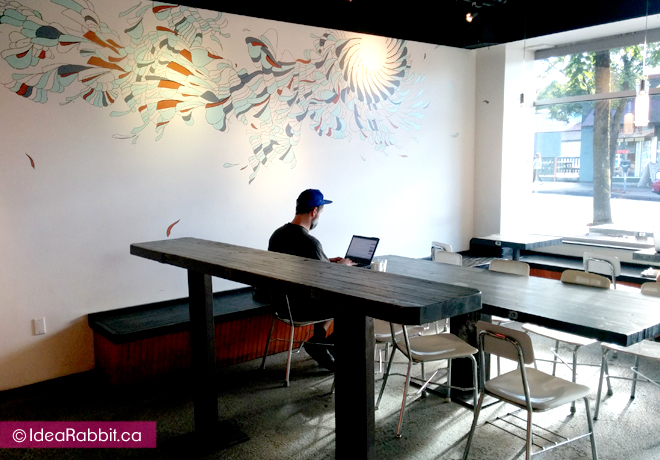 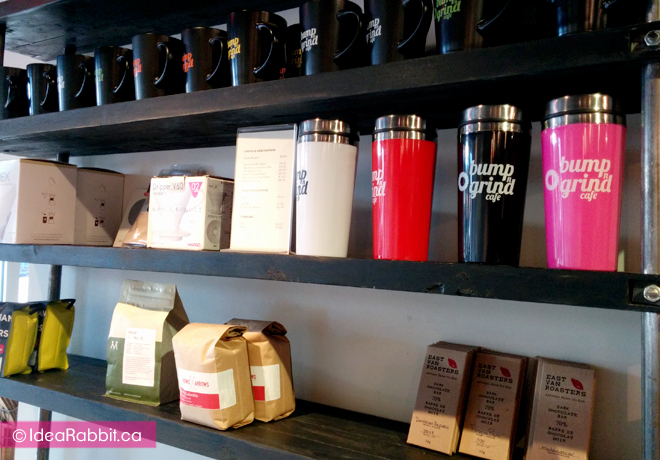 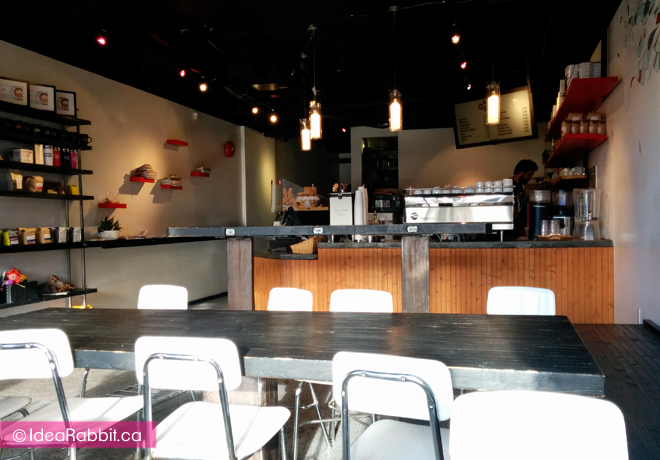 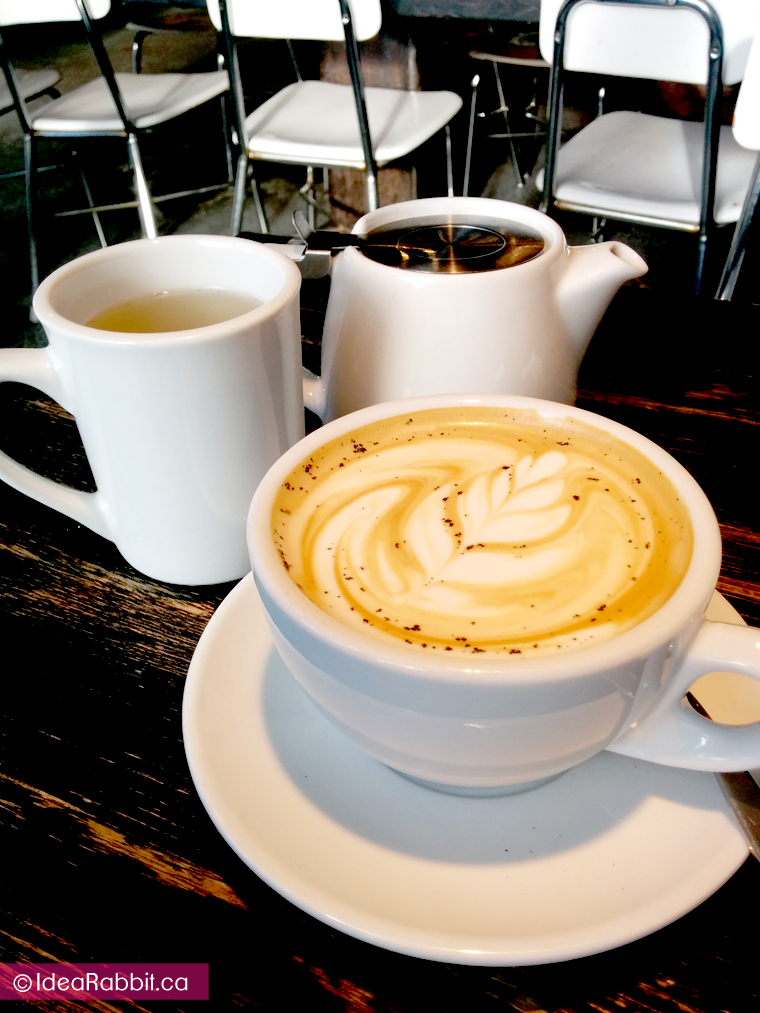 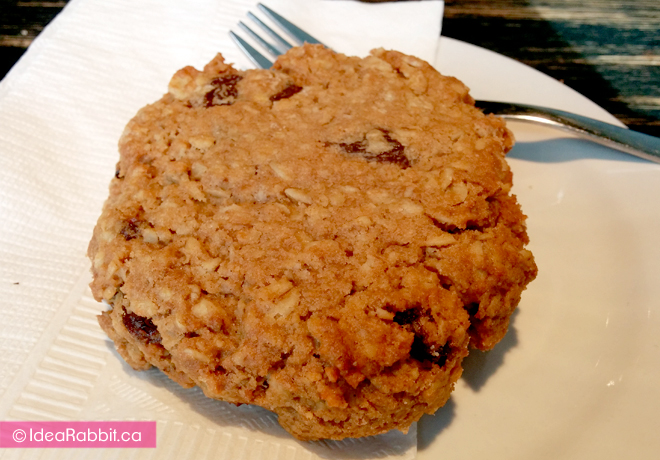 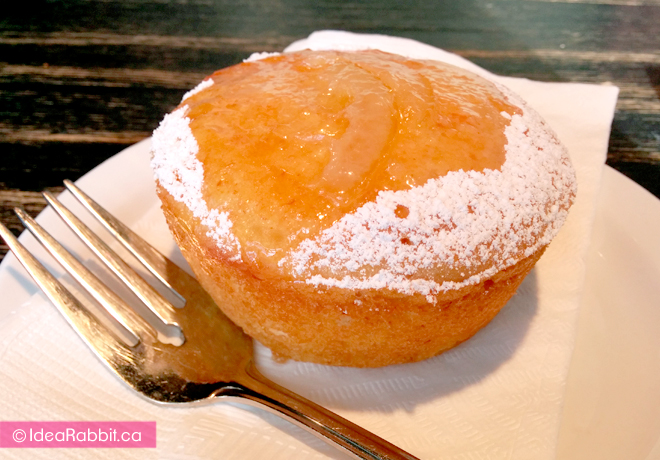 I had the Egyptian Chamomile Tea $2.90 and Lemon Tart $ 3.15. It was really fluffy and not too sweet – which I always like in a dessert.

At most venues we go to, the music is too loud. But other than that, very nice cafe.

When we arrived, it was arrived 6:30pm on a Sunday. The place was packed, but we had actually had arrived a good time because when we left, there was a long lineup out the door of people waiting! Wow! 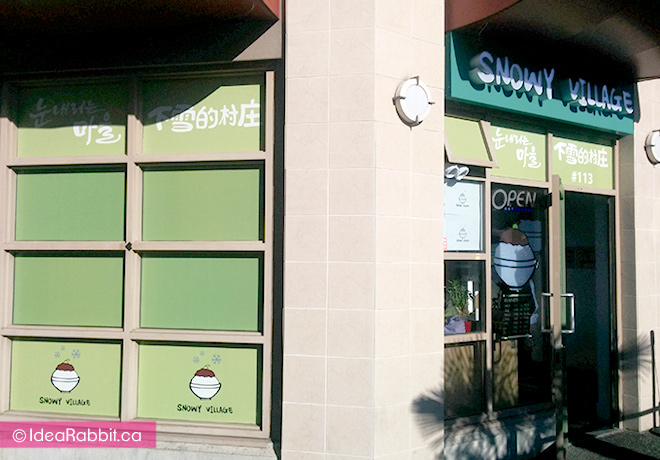 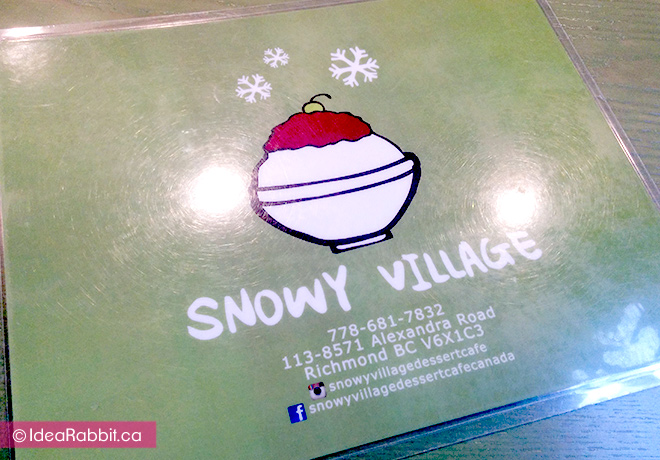 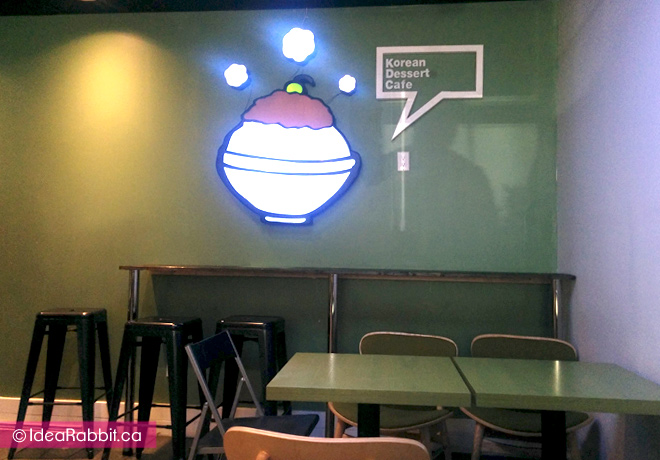 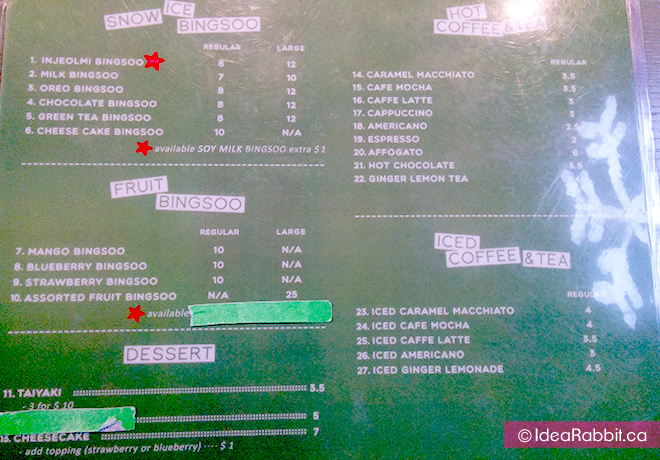 The place is run by Koreans.The staff are really friendly. 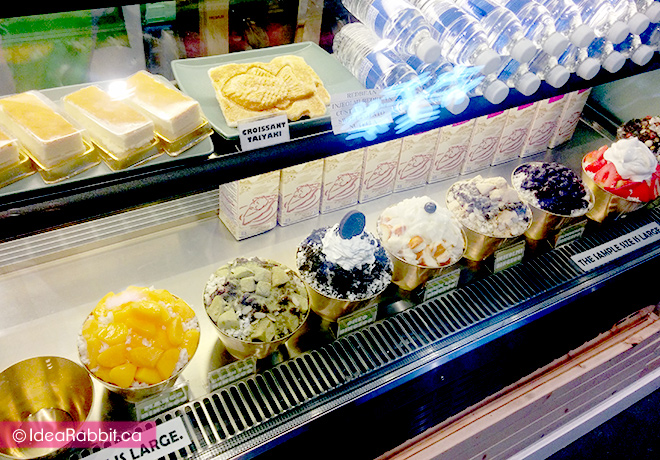 We got a table right away. It’s a little crammed, so you might end up bumping into the other tables as you scoot over to your chair against the wall. The interior has a lime, but gentle green theme throughout, from menus, chairs, tables and aprons. Even the napkins had the delightful green logo on it. Yes – once a designer, you notice the little things! The Korean music was a bit too loud though. 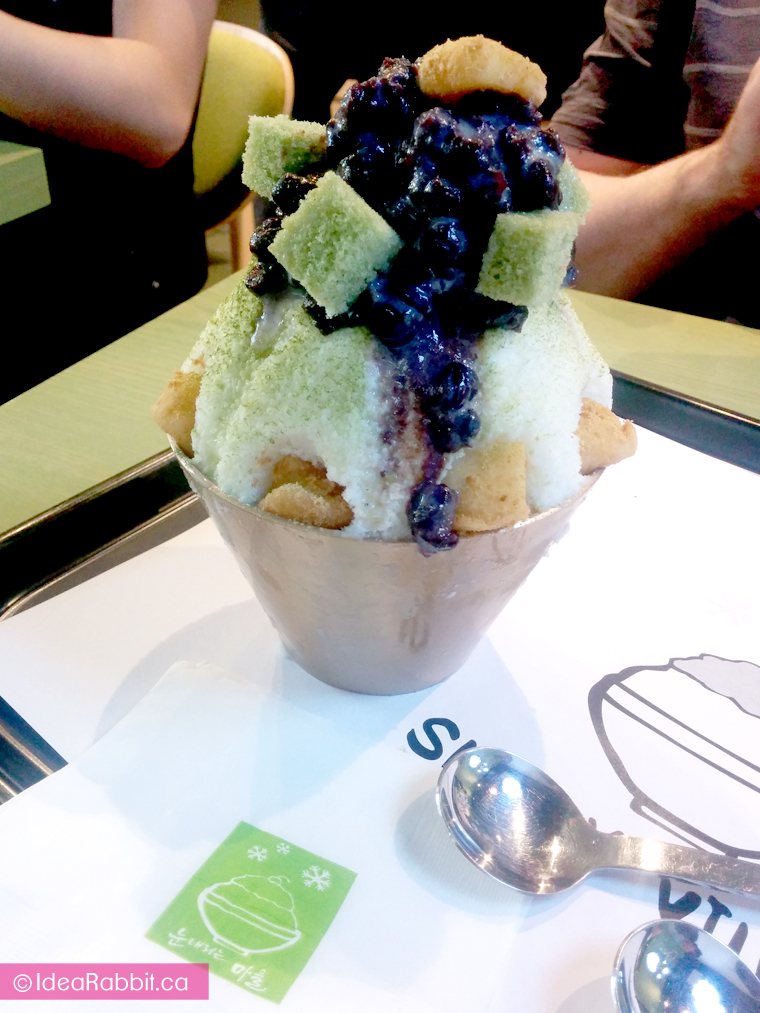 I ordered the regular sized Green Tea Bingsoo $8 (including tax) without nuts and was going to share one with Sheepie. The dessert took quite a while to come out. Even though it’s just shaved milk ice with some red beans, mochi and green tea powder, I guess it’s super busy, so it takes time.

They pile the shaved milk ice like crazy, so that each spoonful you take, you’ll definitely end up spilling some. Some of the other ones (like mango) had the juices and syrup running down the cup like waterfall.

Even with both of us, it felt like the regular was too much. I have no idea how others do it. But then again, I don’t eat that much sweets, and Sheepie doesn’t eat much ice/icecream to begin with.

The flavour was quite light. I wanted more green tea powder, and the shaved milk ice was not as rich as the one I had tried at Spaghetei. I kept rolling the melting shaved milk ice on my tongue to ‘squeeze’ out the flavour, but it wasn’t there.

Everything was good, but I left somewhat disappointed that I didn’t get wowed like the one I was expecting. If I crave them again, I’ll go back to Spaghetei instead.