Disclaimer: *This was a complimentary meal. This post was not edited or written for monetary compensation, and are solely my opinions and observations.

I was kindly invited by Loopp Media to their food tasting event at The Ramenman in the West End. I was super excited because I LOVE ramen! 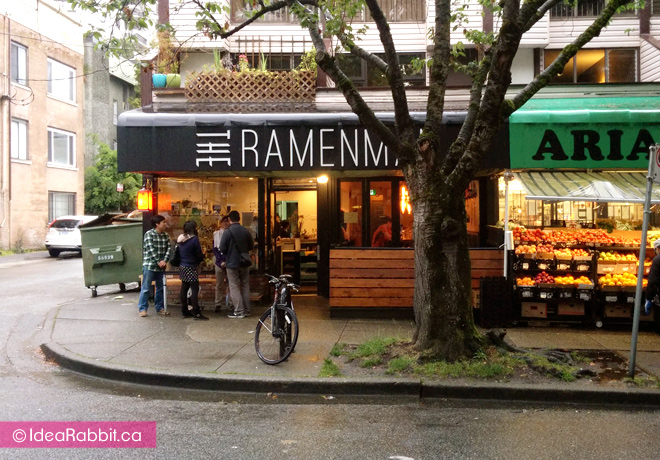 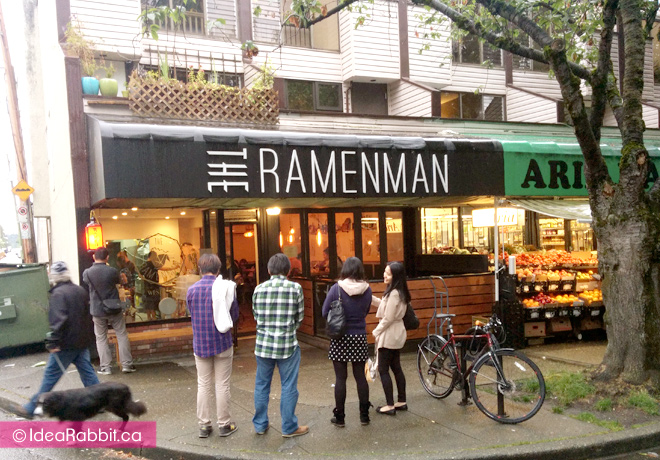 The restaurant is a small, modern hipsterish decor with one long wooden table and two small tables at the back for two seats each. We sat at the long table on metal stools. With space being limited,  hooks are available under the table for your bags and coats. As soon as we walked in, we noticed the heat and humidity. And although the Edison incandescent lightbulbs looked great, it likely added to the heat. They seem to have an AC mounted to the back wall, but it didn’t seem to be on. 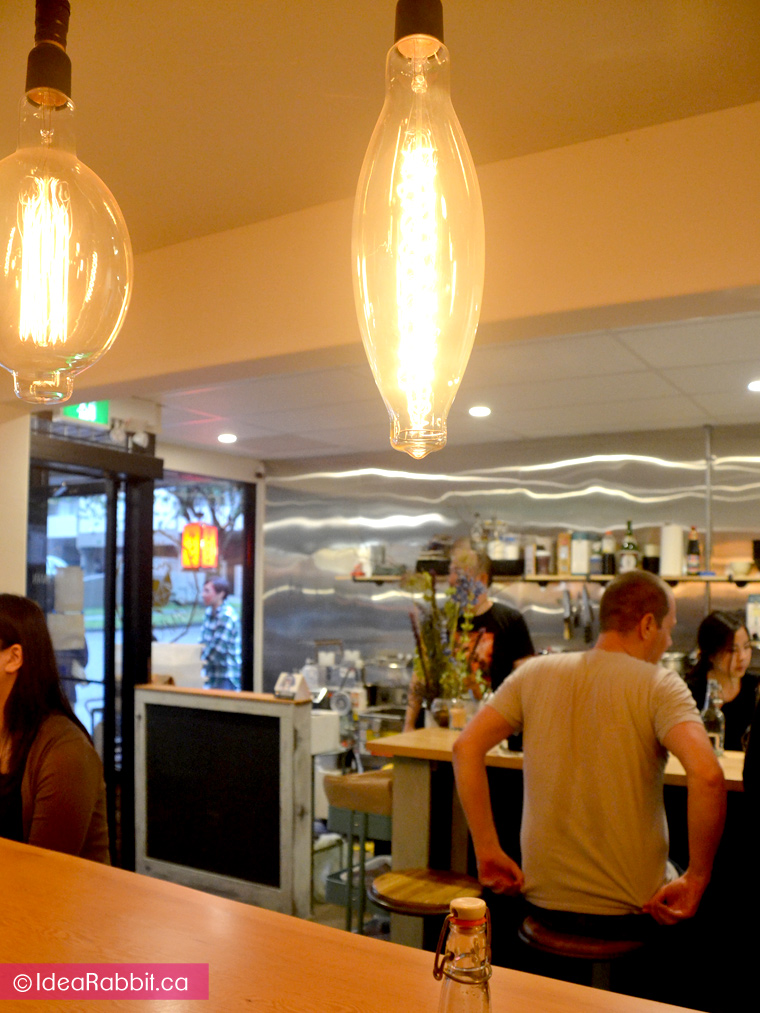 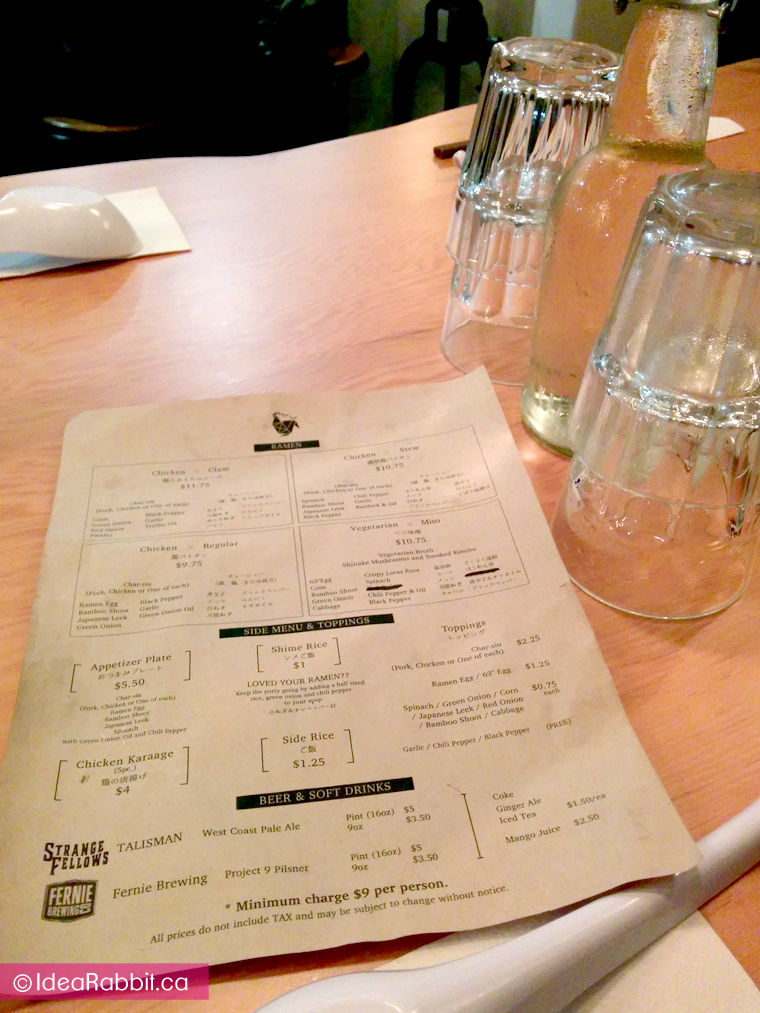 The menu is simple, with 4 selection of ramen to choose from. 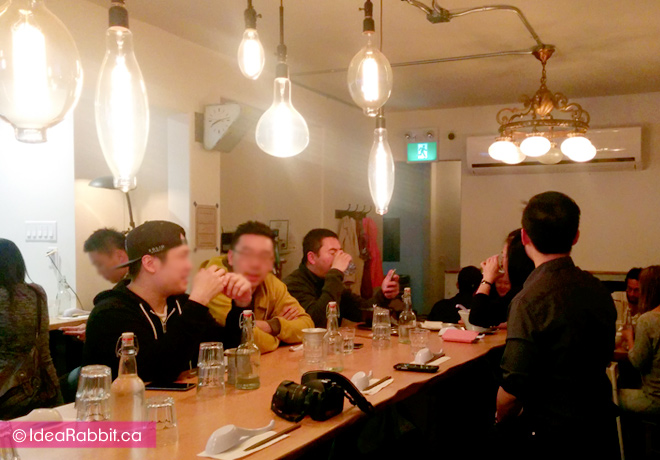 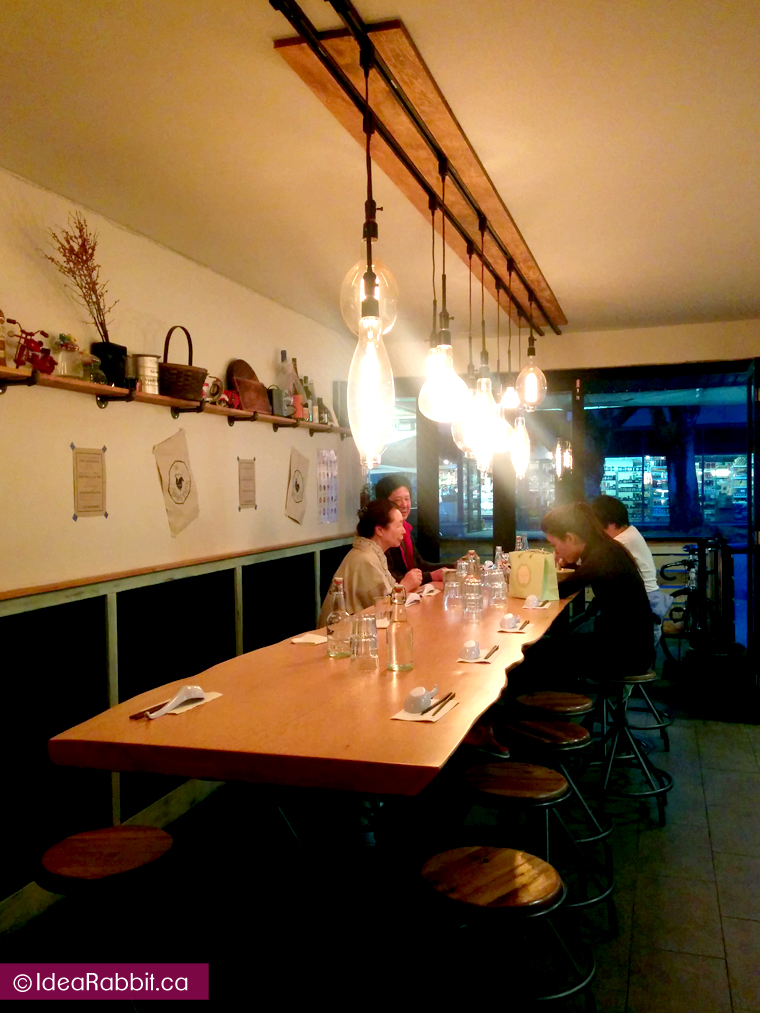 Their broth are based on chicken, rather than the usual pork. This was great, because I love chicken out of all meats, and I often end up ordering chicken ramen at other places anyways. The use of chicken as broth comes from Kansai (the western side of Japan like Osaka, Kyoto, etc), but they also have 100% vegetarian broth as well. 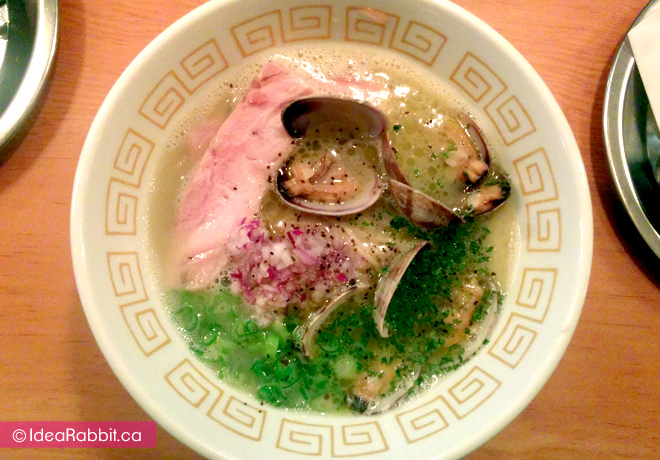 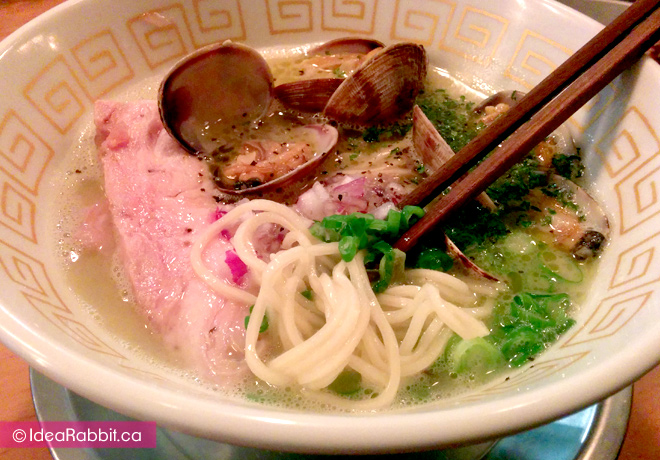 I ordered the Chicken x Clams $11.75 where you have the choice of pork, chicken or both for the meat (not soup). I of course, chose chicken. 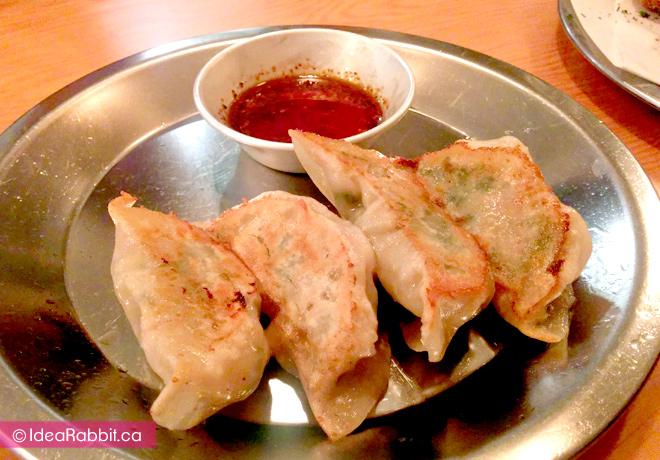 I also had a side order of Pork Scallop Gyoza $4.75 (4 pieces). They were authentic Japanese style, crispy flat on one side while the pleats side is softer. I have never had scallops in my gyoza, so that was a pleasant surprise of the mixture. It went really well with the pork and the sauce mix was really good. I had read several older reviews where people were wishing the place served gyoza, but now they’ve added to the menu! And it’s a good thing they did! 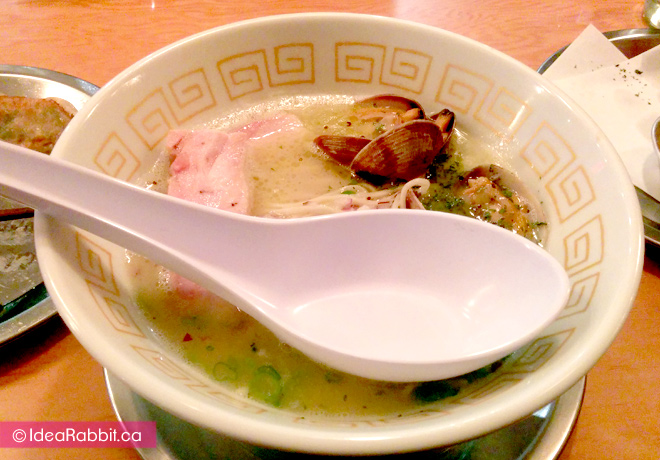 The ramen arrived in a bowl that’s traditionally known in Japan with the Chinese design/pattern on them. Ah, slightly nostalgic…The spoons was humongous! Sorry, I must say this 「デカッ！」(huge!)

I haven’t had clams in my ramen before, so that was new. However, my friend told me of Chinese noodle soups that were similar to these, and he said it even tasted similar to them. The noodles were al dente, which unfortunately, I’m not a fan of. However the firmness wasn’t as hard as the other ramen places in town, so I didn’t notice it as much. The lightness of the soup was enjoyable. The thick but soft chunks of chicken were cold so I dipped them under the noodles to warm them up, and took off some of the fatty parts. However, it was super soft and wasn’t like chicken that I’ve ever had before. It also had some finely diced red onions for extra flavour. 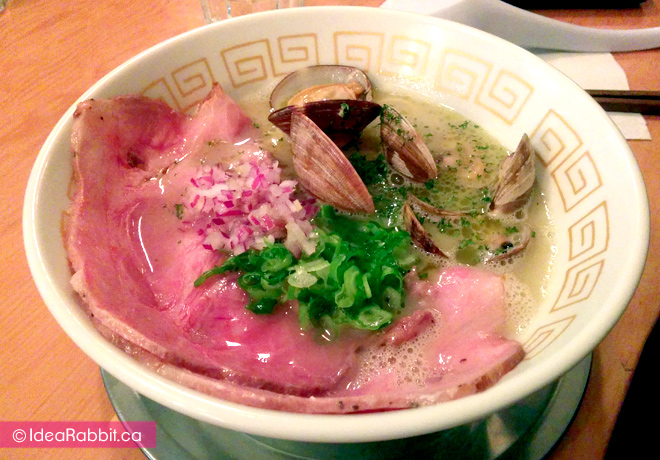 My friend also ordered the Chicken x Clams but with pork pieces. The first thing you noticed was how pink the meat was. Unlike other chasu in ramen that are usually beige to brown, this was more like ham. This doesn’t mean that it’s not cooked! It’s a method called sous vide (from French meaning “under vacuum” where the food is sealed in airtight bags and then placed in a water bath or in a temperature-controlled steam environment. The result of cooking longer and at lower temperatures than usual cooking, is the meat being cooked evenly, while retaining moisture and flavour. With many people inquiring about the ‘raw’ meat, I suggest explaining it on the menu, and actually featuring it as one of their USP (Unique Selling Points). Sorry, my marketing brain is intruding here, lol, 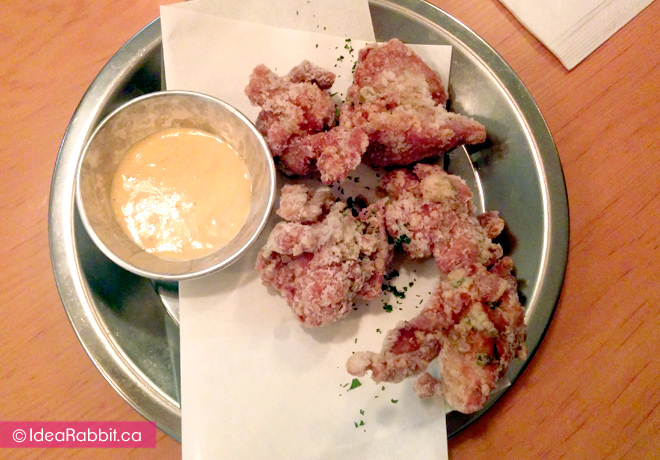 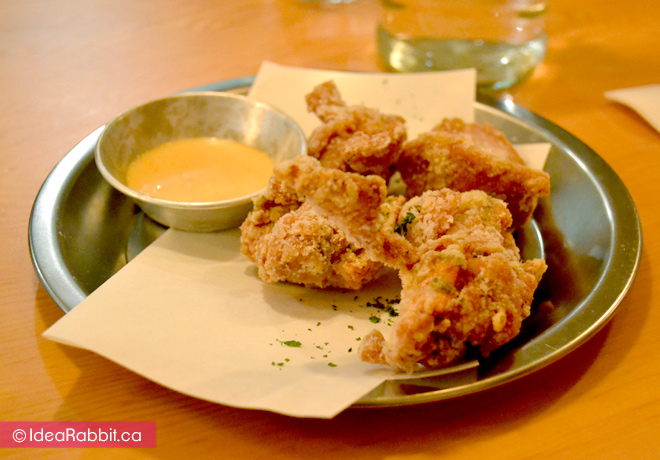 For his side order, he had Karrage $4. I had a piece, and it was super hot and juicy inside, with a crispy, crunchy outer layer. The spicy sauce gave it a nice punch. The meat was marinated to perfection. Thumbs up!

Service was prompt and satisfactory. Would return! 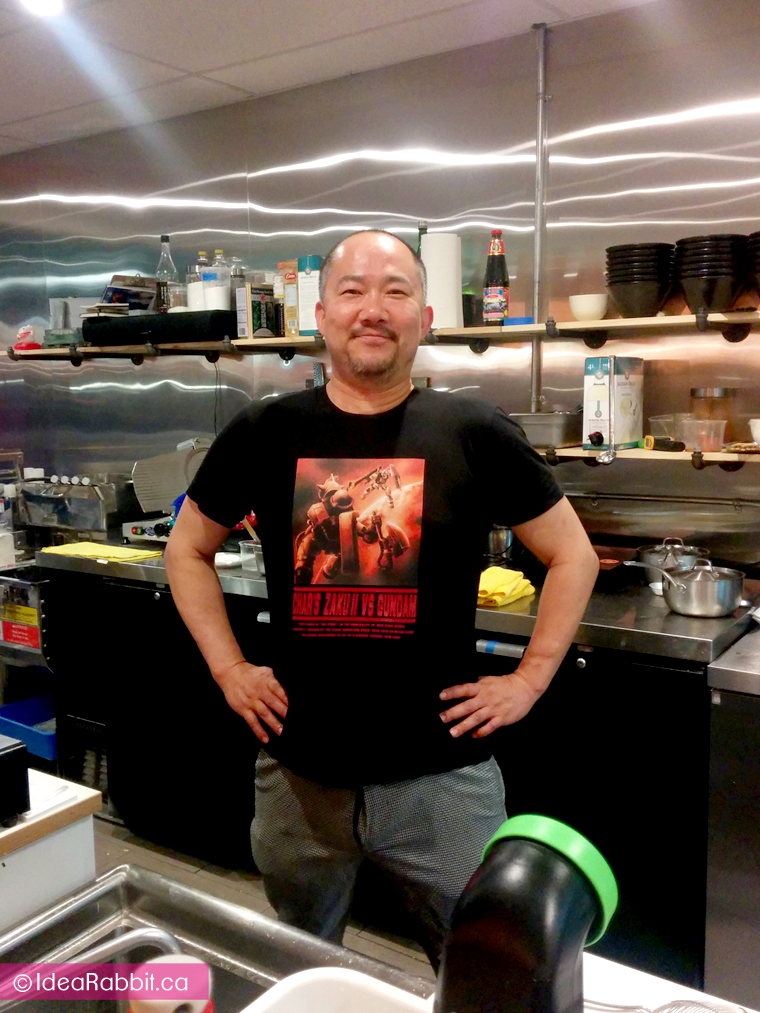 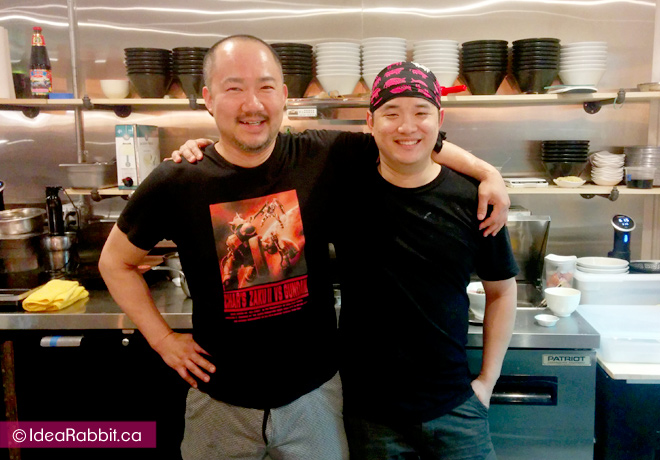 I’d like to update this posting, simply because this is the second time I’ve had food poisoning from Momo. The first time was at the Bidwell location which gave me terrible diarrhea afterwards.  Last night, I went to the one on Denman and was vomiting afterward and missed work the next day.

I will never go back to any Momo again!!!

I’ve only been to this location twice, but is probably my favourite location because it’s the newest, cleanest and spacious. Like the other locations, it’s run by Koreans, and it seems like it’s always full and busy! The prices for this location seems higher than the rest, but we’re only talking about $0.50-$1 difference.

Despite all the other locations being busy, this one for some reason, the service seems a little colder…or you feel a bit neglected.

The quality of the food is good, though since I’ve only gone twice, I don’t have the numbers to compare to with Bidwell and Gastown location which I’ve probably gone more than several dozen times to each. 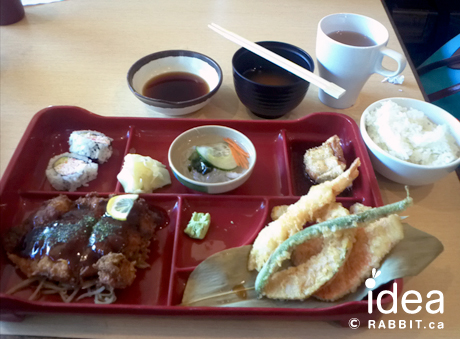 New posting! For lunch out on patio

It was nice weather on a weekend so we decided to sit out on the patio. The owner Alex was there and greeted us since he knew one of us who’s name was also Alex. LOL.

On the house, we were served a salad, small soup, and banchan of edamame, yam and sausages. Very nice, considering our bill was so small – because everything is so cheap! (as in cost) The quality is very good. I wish I lived around the block…I would come all the time…

I ordered the negitoro roll $2.95 and double spicy roll $4.50 (inside: cucumber, avocado, spicy salmon | outside: spicy crab, onion, wasabi mayo, unagi sauce). They were both really good. I had stopped going to the other two locations because of quality and atmosphere, but I recommend this location! Thumbs up!

Depending on who serves you, the service may be good or meh. I’m not sure if one of the girl is new, but she didn’t take our order when I said I was ready twice. She came the third time. She wasn’t able to do the bill, so we had to wait for another staff. 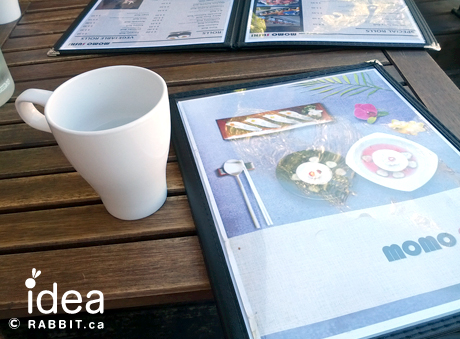 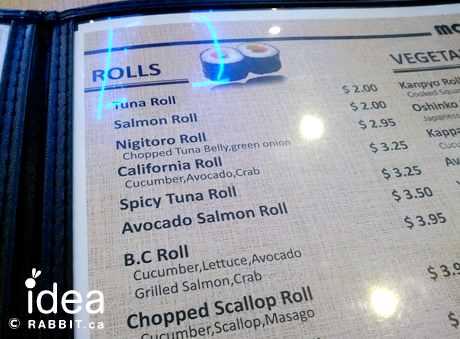 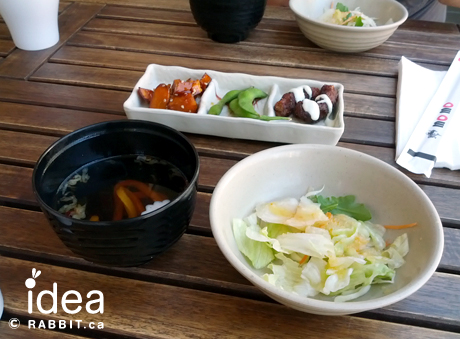 This is the smallest Momo Sushi location – all run by Koreans. It’s an easy to miss sushi-ya, almost hidden on Bidwell St.  Some prices seem to be even cheaper than the other two. There are only about 10-12 seats inside, and a table for about 4 outside during the summer, so not good for large groups. It’s usually full with some waiting for take outs.

The price is really inexpensive – $6 for bento box. Service is prompt and friendly. Water or tea is self-serve.When we dine in, we will usually get a small soup that goes with the bento combos with 2-3 strings of udon in it. I find it a bit too salty and usually don’t end up drinking the whole thing. It’s a good place if you want to get yourself filled up for really cheap. This is my least favourite location because it is the most run-down and feels super cramped. They did do a bit of renovation earlier this year though – however, it seemed like it was done themselves, so nothing spectacular in the changes.

I suggest doing take out if you live near by.

I had once instance where the spicy tuna looked off, and tasted bad. I shouldn’t have eaten them…I only had a roll and a bit of the three, but later on, I knew I shouldn’t have even touched it! BLAH~~~ also, that take out took forever…waited along time.

Months later, my friend also took out, again waiting for a long time. However, the percentage of long take outs versus quick ones are very low, so don’t think that it’s always slow. However, that time too, he also said the quality was really low.

Since then, I have avoided going to Momo – this one in particular since there are many other choices in the downtown area that are competitive in price and quality.